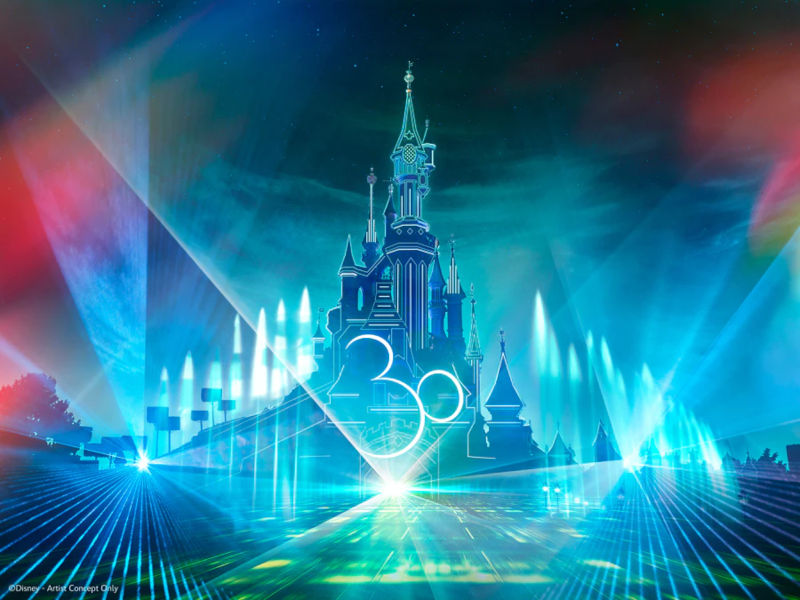 The Disneyland Paris 30th anniversary celebrations kick off on March 6, 2022. If you’re in France for the festivities, here’s what you can expect at Disney’s only European park.

Walt Disney World is deep in its 50th Anniversary Celebration, but let’s turn our attention across the pond as ring in the 30th anniversary of Disneyland Paris. 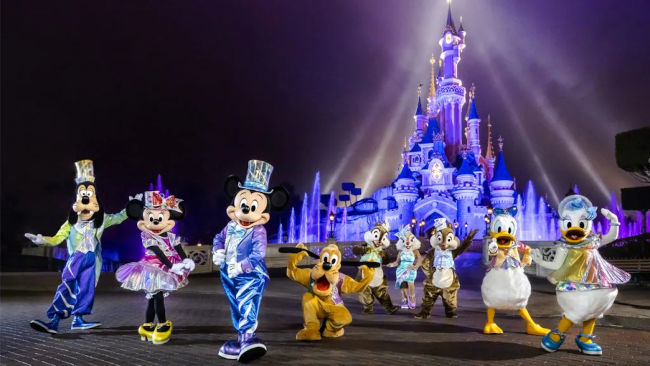 Here’s everything you can expect for the Disneyland Paris 30th anniversary: 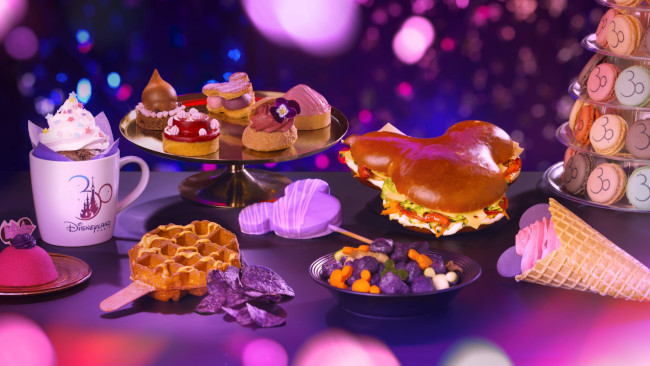 There are plenty of new snacks, beverages, and full meals on offer for the 30th anniversary of Disneyland Paris at the 59 restaurants, 10 bars, and various snack bars. While Disney has not yet unleashed the full menu, we’ve been promised 60+ new dishes, including several vegetarian and even vegan options, like a salted mashed potato waffle and a vegan panini. Disney chefs have even assembled some vegetarian and vegan desserts and cocktails. In fact, every dining location offers vegetarian alternatives. 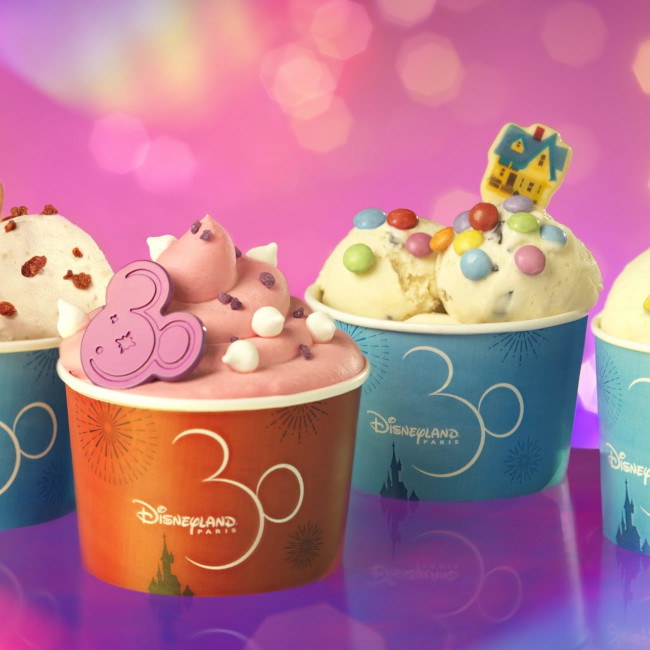 So many snacks to try. Photo courtesy of Disney 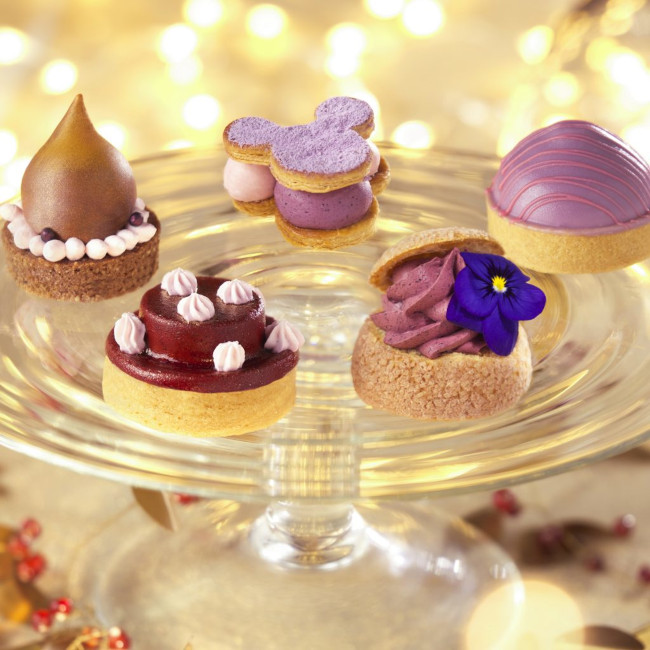 If you’re traveling to DLP during the anniversary shenanigans, book some time at a Table-Service restaurant. Disneyland Paris’ pastry team, which includes chefs, sous chef, and commis, have created a number of new desserts for DLP’s sit-down restaurants to mark the occasion. Among the new dessert options are “Le Bouquet final,” a white chocolate and strawberry dome cake, as well as all-you-can-eat buffets with special 30th anniversary macarons as far as the eye can see. 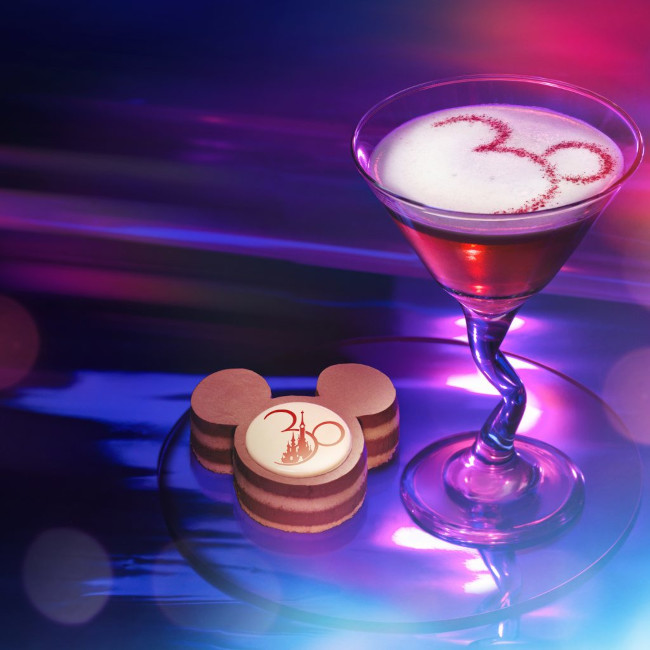 Plenty of new cocktails on the 30th anniversary menu. Photo courtesy of Disney

Feeling thirsty? The Disneyland Paris 30th anniversary drinks list includes several specialties from the barman team. We’ve got our eye on the pink “Happy Birthday Cocktail” (I mean, just look at that beautiful 30th logo stamped on the drink). Another drink on offer is the “Smoothie with a twist,” which will take its fresh flavors from bananas, coconut, and blueberries—and booze of course. Disney also promises a blue “Enchanted Flute.” 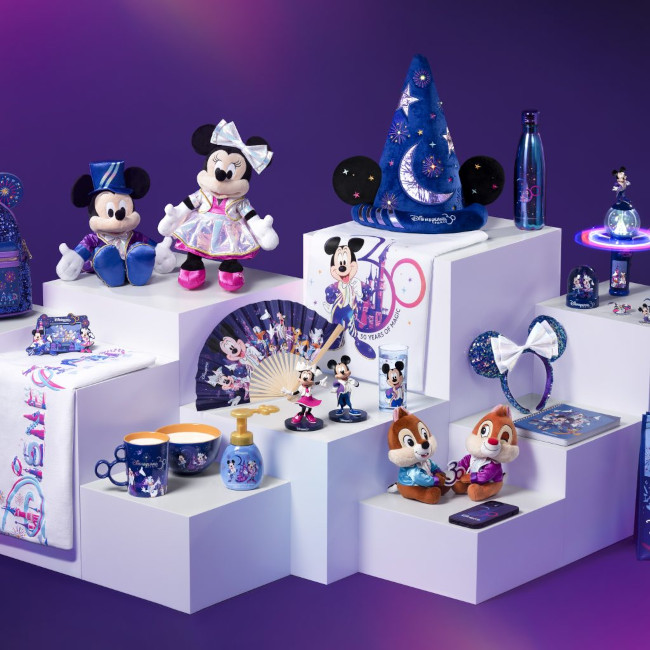 Some of the new merch for the 30th anniversary. Photo courtesy of Disney

Paris is known for its great shopping, and that doesn’t stop just because you enter a Disney Park. For the 30th anniversary alone, Disneyland Paris is introducing more than 350 new merch items at its 63 boutiques and shops.

So what does the 30th anniversary merch collection include? Shop for items like keychains, special character plushes, new sweatshirts, and, of course, new Mickey ear headbands (but likely none as expensive as these). 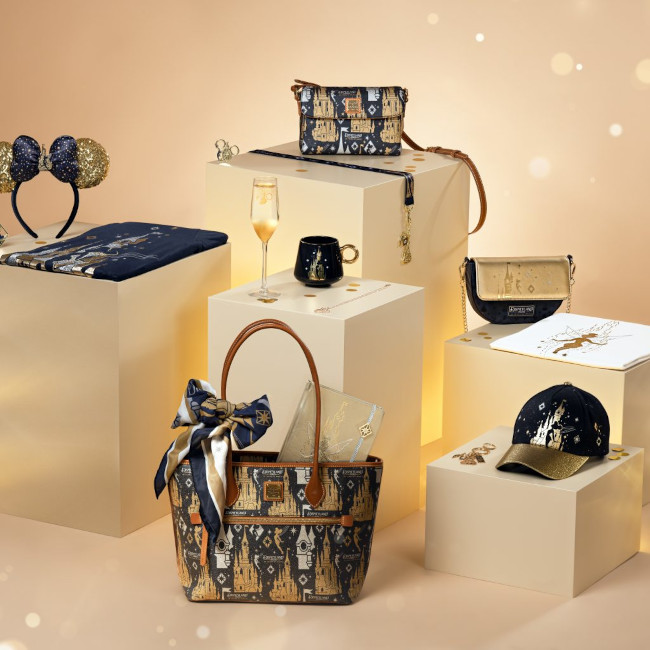 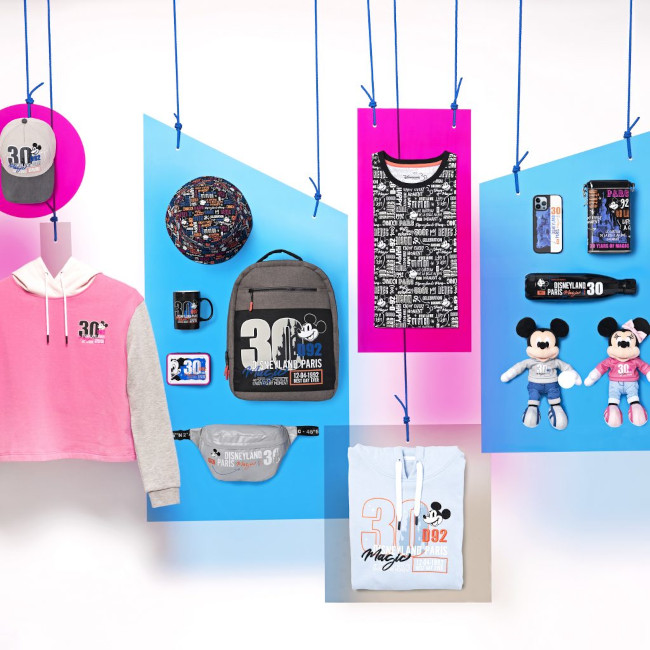 But like with the Walt Disney World 50th anniversary merch, don’t expect it all at once. Here in Florida, Disney has been doing a slow release throughout the 16-month celebration, with new collections popping up as time goes by. Disneyland Paris will be employing the same strategy for its specialty 30th anniversary merch. 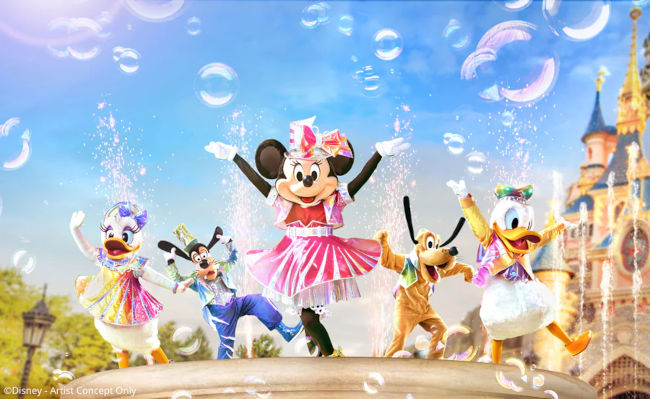 Check out the Disneyland Paris 30th anniversary costumes in the new “Dream… and Shine Brighter!” show. Photo courtesy of Disney

Guests will be able to take in a new Disneyland Paris 30th anniversary show called “Dream… and Shine Brighter!” multiple times a day on Central Plaza in Disneyland Park, right in front of Sleeping Beauty Castle. The castle just finished up a 12-month-long refurbishment, and it looks stunning.

Tap here to learn more about Disney castles around the world.

“Dream… and Shine Brighter!” will focus on three core themes: dreams, laugh, and passion. During the show, you’ll spot more than 30 iconic Disney characters and dancers, as well as new colorful floats. Listen closely: There’s even a new soundtrack.

This show is the perfect opportunity to spot Mickey, Minnie, Donald Daisy, Goofy, Pluto, and more in their new ‘fits. Other Disney characters to keep an eye out for include Genie (Aladdin), Rapunzel (Tangled), and Woodie and Jessie (Toy Story).

In addition to this new show, Disneyland Paris will be bringing back “Mickey and the Magician” in the “spring/summer” and “Disney Junior Dream Factory, Disney Stars on Parade” (back now).

Like with the WDW 50th anniversary, DLP’s 30th anniversary will include special iridescent costumes (Disneyland Paris has not adopted “EARidescent” in their marketing materials as of yet). .

Check out this video of new costumes for Mickey and friends:

Some fast facts about these new costumes. Designers used …

Costumes have long been a part of the magic at Disneyland Paris. Over these last 30 years, designers have created more than 30,000 unique costumes, making it one of the largest costume collections in all of Europe. 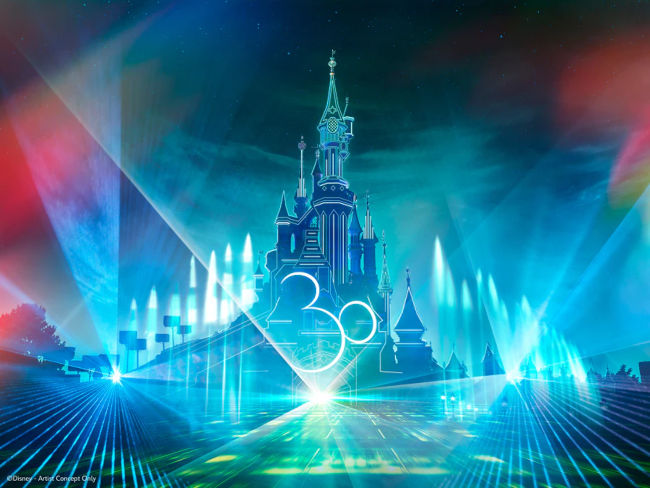 Disney has been on the cutting edge of technology for a long time: Projection mapping makes for the most immersive fireworks shows in existence, and trackless rides give new life to the traditional dark ride. And now? Drones.

But the drone choreography is just part of the magic. Disney also worked with a symphony orchestra at Abbey Road Studios to develop a new theme song (“Un monde qui s’illumine”) that will score the elegant dance of the 200 synchronized drones.

Check out the work that brought this drone show about:

Want to learn more about projection technology? Order a collectible copy of our EXTREME issue, in which we interviewed Aaron Counterman, the Principal Video Designer of Disney Live Entertainment, to find out how Disney designs such immersive shows on the castles, Tree of Life, and more. 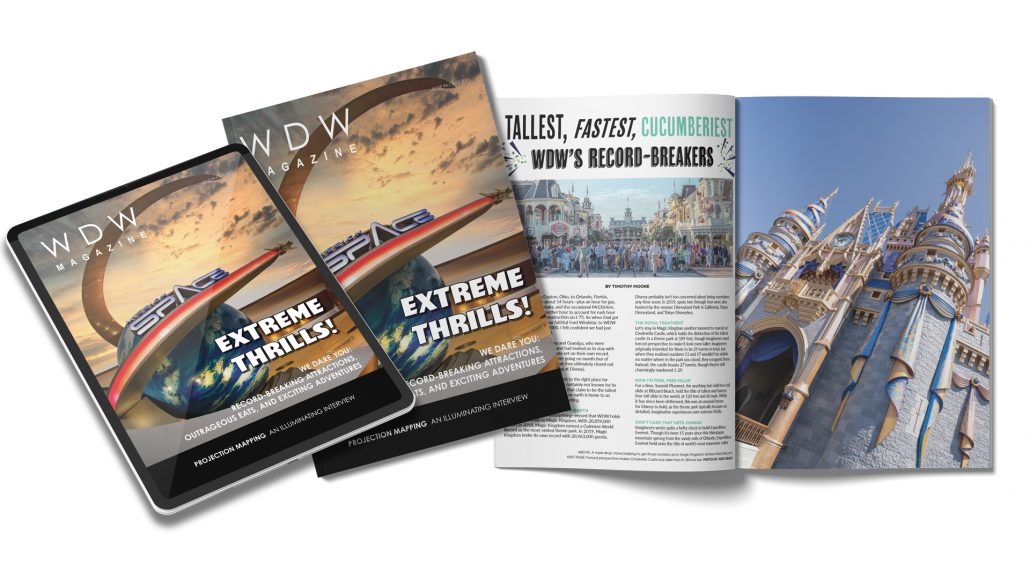 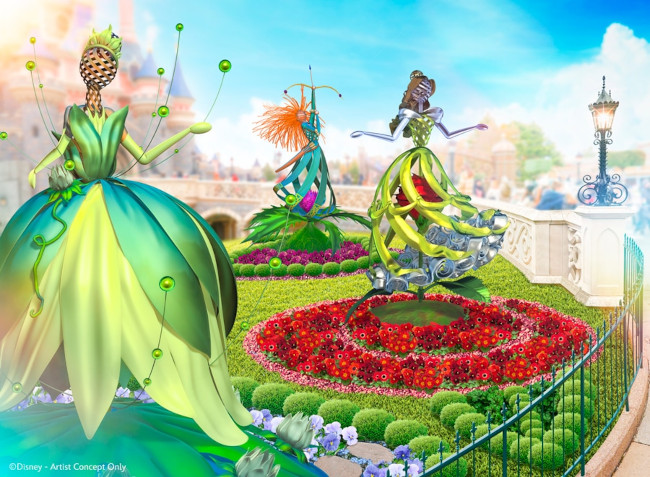 A mockup of the Disney Princess Garden of Wonder. Photo courtesy of Disney

You’ll be able to stroll through 10 unique gardens to take in these Disney and Pixar characters. Disney offers the Garden of Asia as an example, which will house Mushu (Mulan), Sisu (Raya and the Last Dragon), and Baymax (Big Hero 6).

Other garden characters will include Disney Princesses and Disney Villains.

Check out this behind-the-scenes look at the Gardens of Wonder at Disneyland Paris (it’s in French, but it’s subtitled):

To bring these 10 gardens to life, Disneyland Paris relies on roughly 100 Cast Members who work as gardeners (horticulturalists, arborists, and more). Wondering what other unique jobs Cast Members can have at Disney? Become a digital subscriber to get access to our member-exclusive content, including our Cast Member Magic issue, available starting in February 2022. 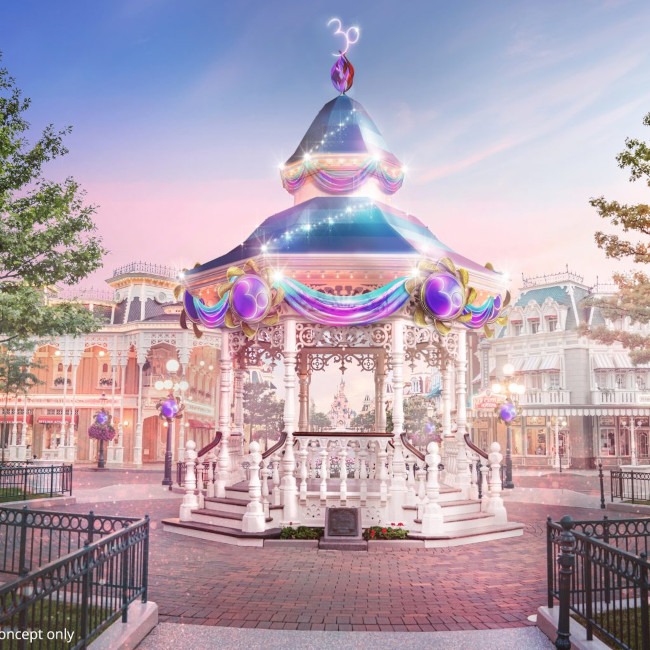 An iridescent glow-up of the Gazebo. Photo courtesy of Disney

In addition to the 30 kinetic statues among the gardens (think of them as the equivalent to our Fab 50 gold character statues at Walt Disney World), Disneyland Paris will be sprinkling some iridescent blue and purple magic—and special lighting effects—around the resort’s most popular locations, including Main Street Station, the Gazebo, and Disney Village. 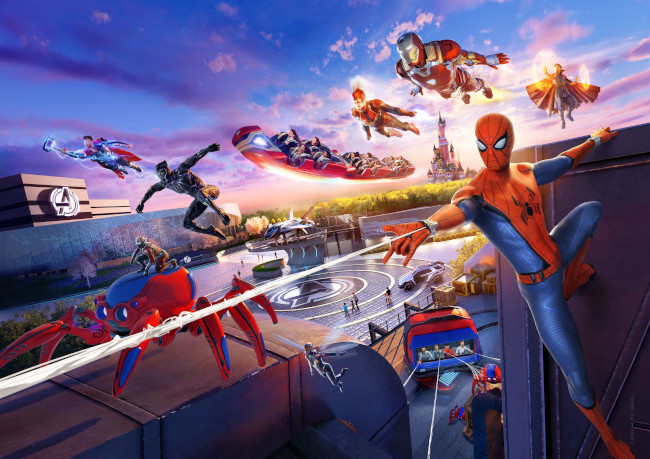 At long last, Avengers Campus will be opening at Disneyland Paris in summer 2022, meaning even more Marvel magic outside of the Art of Marvel hotel. Disney has not released all the details on this new part of the parks, but our own Avengers Campus in California (you know, with that crazy Audio-Animatronic Spider-Man) is likely to influence the direction and attractions. 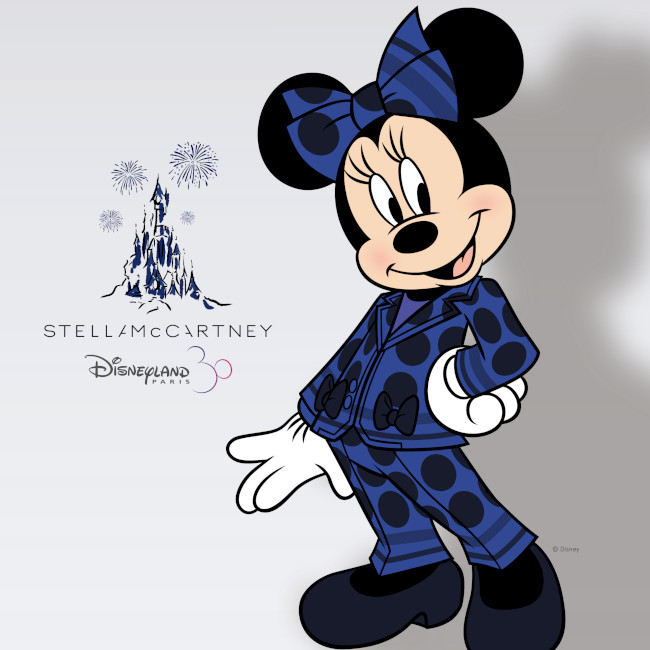 Minnie showing off her new pants. Photo courtesy of Disney

It’s 2022, and Minnie doesn’t always want to wear a skirt—and nor should she have to. Famous British designer Stella McCartney has designed Minnie’s first-ever pantsuit, which she will wear at Disneyland Paris. This is a separate costume from Minnie’s new iridescent 30th anniversary costume, which is still a skirt.

Disneyland Paris is the number one tourist destination in Europe. That’s right, more people flock to DLP than the Cliffs of Moher in Ireland, Stonehenge in England, the Black Forest in Germany, and the Vatican in Italy. Here are some fast facts about this tourism icon in Europe:

Want to stay in the loop on all the latest Disney news? Tap to get our weekly Disney newsletter in your inbox.