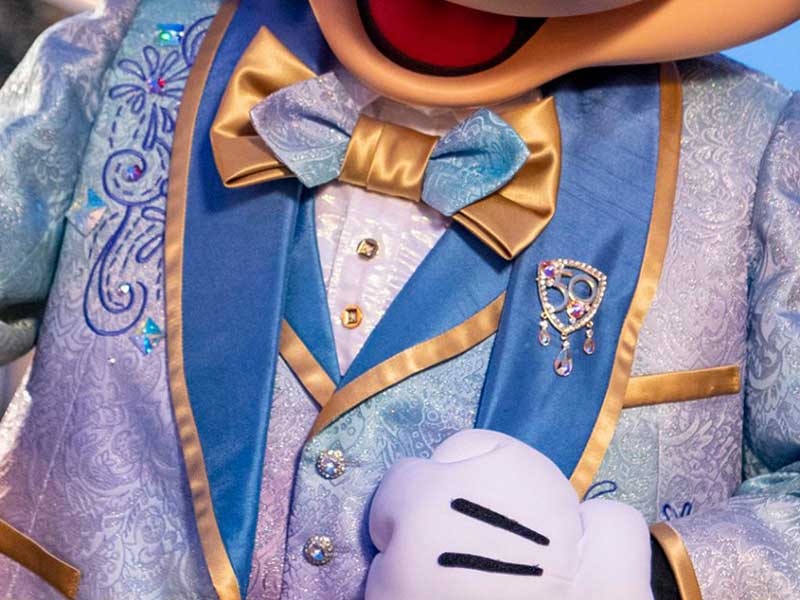 Get ready, Disneybounders—brilliant iridescent outfits are coming down the runway. Disney just released footage of Mickey and his pals in their glittering 50th Anniversary costumes, and we are reporting on all the details!

Here are all the 50th Anniversary outfits, including some extreme close-ups of Mickey and Minnie’s formal attire. Seeing the costumes in motion, and close-up photos should tell you what to pack for when you meet up with Mickey and friends this October.

Disneybounders, be sure to take a look at the colors in these detail shots to get a better idea of what is going on with these gleaming costumes!

Daisy Duck is always serving up the latest style, so you know her 50th Anniversary character costume had to be the toast of the town.

Daisy served up a flouncy gold-trimmed skirt on the catwalk, accented by a big golden bow. Check the bounce on those skirt layers!

Donald has never looked twice at pants, but he really knows how to dress up his top half. He has more deep purple on his outfit than the other characters, so if you’re planning on a socially-distanced pose near Donald this October, plan on these colors.

Chip and Dale. Via Disney Parks

Chip and Dale are known for the colorful vests they wear to change up their look. These vests appear to be more pastel than some of the other character costumes. Chip & Dale’s 50th anniversary costumes include iridescent bowties! 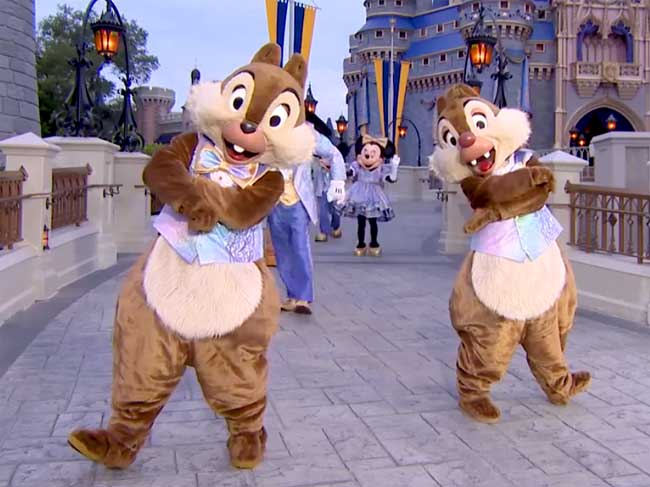 Chip and Dale in cute vests. Photo via Disney Parks

Is it just us, or does Goofy take on a kind of James Bond persona when you put him in a suit? 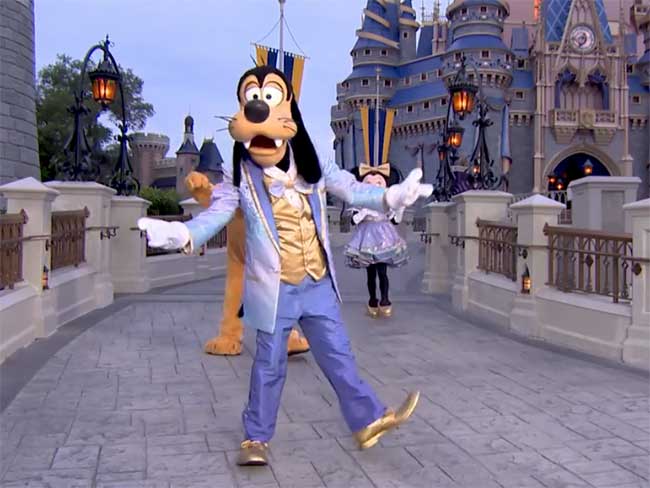 Goofy is sporting more gold in his 50th Anniversary costume than the other characters, and the look serves him well.

Minnie is definitely working the iridescence to the max on her 50th Anniversary costume. We had to get a closer look at that embroidery: 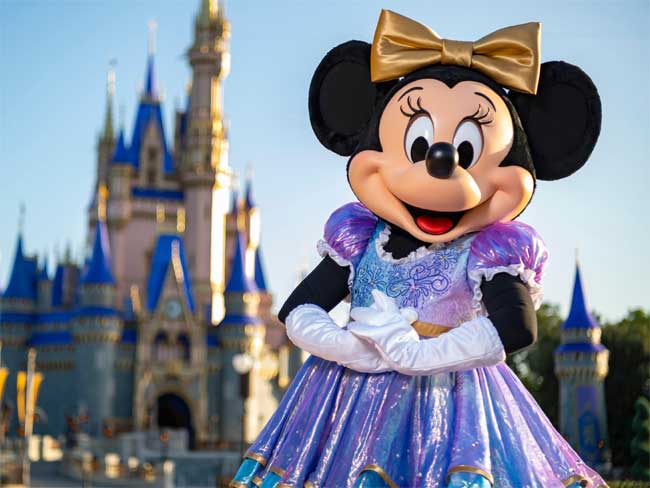 A dress to inspire a thousand Disneybounds! Photo via Disney Parks 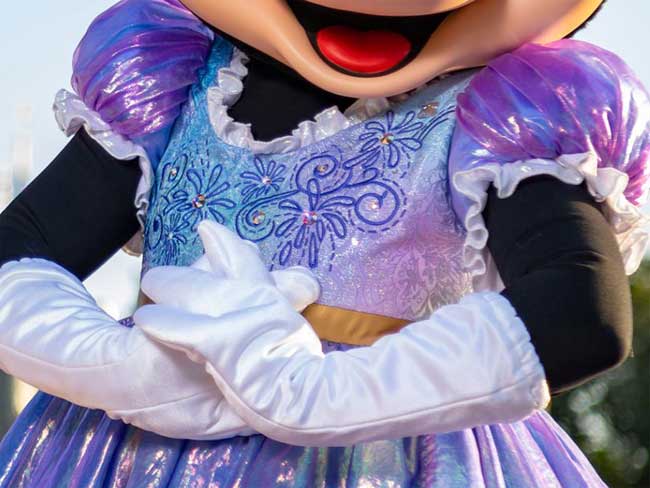 The embroidery on Minnie’s 50th Anniversary costume is fireworks! With the recent announcement of Disney’s Enchantment show at Magic Kingdom, this is a natural choice.

🎵He’s the leader of the band, so he’s got the finest threads!🎵 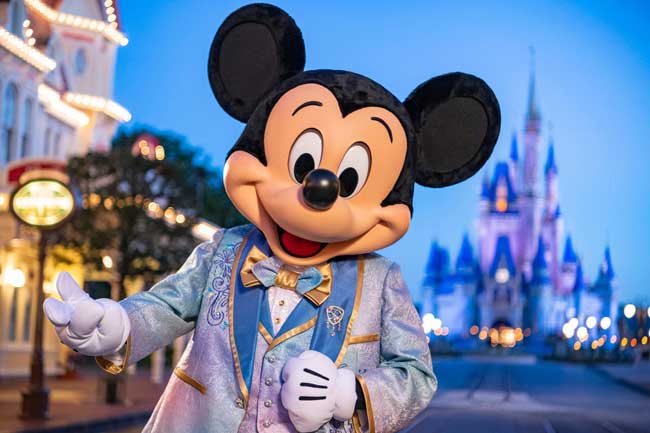 Mickey stylin’ for the celebration. Photo via Disney Parks

We zoomed in to get a good look at the details. Mickey’s golden bowtie has a satin finish, and he is wearing some fancy 50th drip on that lapel pin: 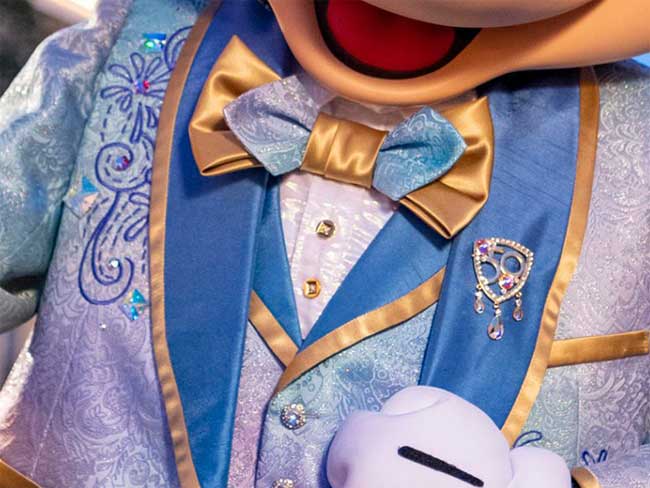 Mickey has the same fireworks embroidery as Minnie (because they know it’s too cute when they match), and he has both golden and rhinestone buttons. This is definitely a shiny 50th Anniversary outfit… even his white button-down shirt is gleaming like a pearl!

Here is a look at all of the 50th Anniversary costumes, including Pluto, who is wearing an iridescent collar to celebrate! 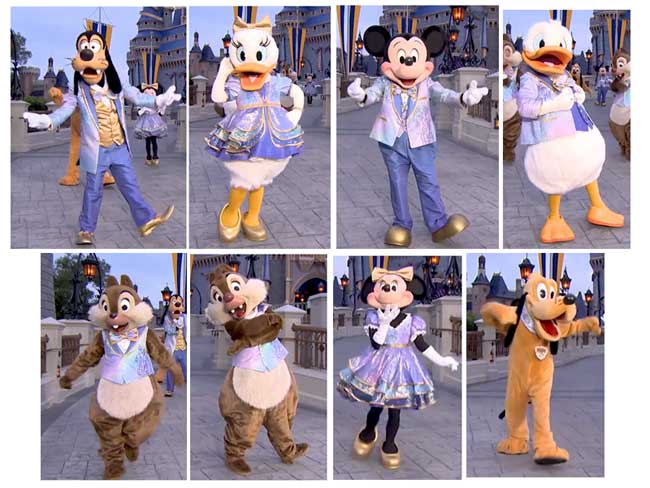 All of the Disney World 50th Anniversary costumes. Photos via Disney Parks

Want to see the characters in action as soon as they debut in October?  WDW Magazine will be at Magic Kingdom on October 1, 2021, to show you the festivities! Sign up for our newsletter to join the celebration.