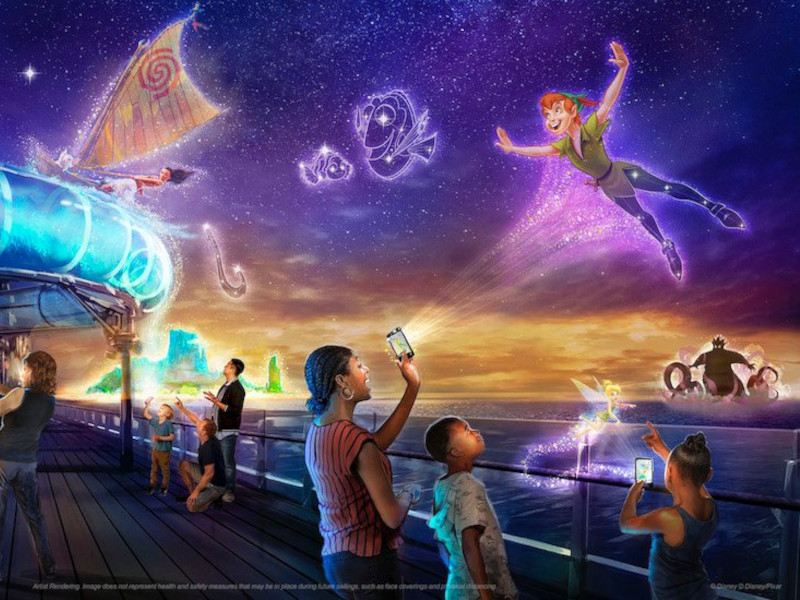 Today, Disney announced a first-of-its-kind interactive experience for the newest ship in the Disney Cruise Line fleet. It’s called Disney Uncharted Adventure, and it will debut on the new Disney Wish.

According to Davey Feder, who got his start in Disney gaming but now serves as a software product manager at Walt Disney Imagineering for Disney Cruise Line, this new experience brings together technology, art, and game design in a multiday adventure that starts at home and lasts the whole cruise long.

Much like the three-day itinerary on Galactic Starcruiser, this will be a participatory storytelling experience.

What Is Disney Uncharted Adventure? 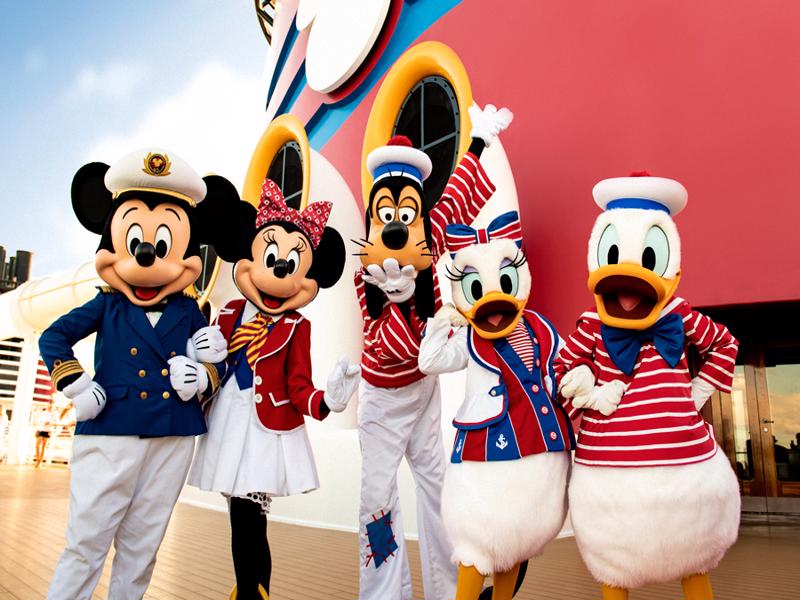 Disney Uncharted Adventure is a brand-new type of immersive adventure, exclusive to Disney Cruise Line. The first adventurers to experience it will be those aboard the Disney Wish.

In this unique experience, guests aboard the Disney Wish will interact with one another, as well as their favorite characters from Disney and Pixar films. Each guest will become the hero of their own story, drawing on the history of wayfinders, who looked to the night sky as they navigated the uncharted sea.

“With the Disney Wish, we have an incredible opportunity to immerse our guests in the worlds of their favorite stories in surprising, interactive, and completely unique new ways,” said Feder. “With Disney Uncharted Adventure, we’re literally putting the power in our guests’ hands to become the heroes of a grand adventure that can only be done on a Disney cruise.”

The Play Disney Parks app will be the main resource for the experience, but it’s important to note that is not for Disney Parks. This is a cruise line-exclusive experience.

The Story of Disney Uncharted Adventure

The storyline of Disney Uncharted Adventure is based upon a simple premise: What happens when the Wishing Star goes missing? Guests and their families will work together to find the star and reinstate it in its rightful place in the sky.

This story will play out over three acts: Prelude, Quest, and Finale.

Before boarding the Disney Wish, you will access your Play Disney Parks app (so have it downloaded and ready to go while you have service). Captain Minnie and Mickey will send you a message via the app.

In this message, you’ll find a warm welcome from Captain Minnie, who will teach you all about stars. In fact, through the app, Captain Minnie enchants your phone: Once you board the ship, it will serve as a magical spyglass to view magical stars.

During your cruise, you will be be able to view new constellations in the sky using the app that has enchanted your phone. The sky will be filled with constellations inspired by some of your favorite Disney stories—Finding Nemo, Peter Pan, The Princess and the Frog, and Moana.

But as you’re viewing these beautiful constellations, you’ll learn that the Wishing Star, which connects each of the constellations, has broken apart. You and your family must complete quests to rescue the pieces, reassemble the star, and return it to the night sky.

For example, one of the quests takes you to Motunui. You’ll see the story unfold through a porthole (a video screen), where Moana ushers you through to help her navigate the reef. Through your phone (each guest will need their own phone to play), you and your family will move canoes around to help Moana find her piece of the Wishing Star. 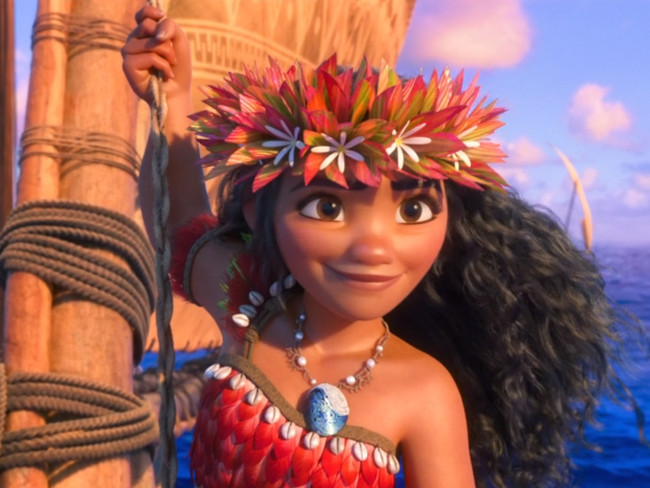 But before you know it, the Kakamora will try to board the ship, and only you and your family can stop the threat.

Once you’ve fended off the Kakamora, you’ll head to Lalotai (the realm of monsters) with Maui to meet your favorite villainous crab, Tamatoa. You’ll have to battle Tamatoa to get that shiny piece of star.

This is just one of the exciting quests you will need to complete to get the Wishing Star back in the sky. You’ll be able to do the quests in any order during your cruise.

It will take the cooperation of everybody aboard the ship to get the Wishing Star back in the sky. During the finale, guests will gather in Luna, the interactive event space.

But look out! Ursula emerges from the sea, revealing that it was she who broke the star in the first place. Everyone will have to work together to defeat her. 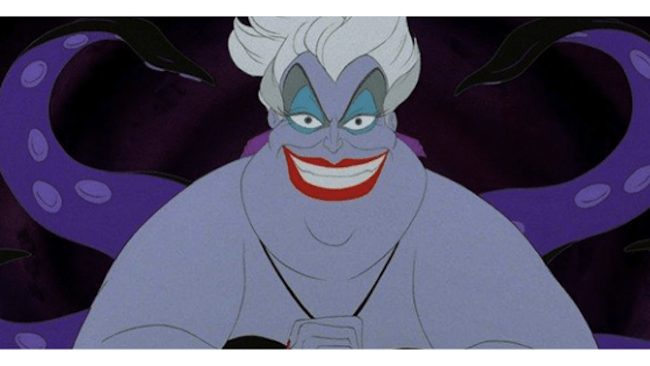 The finale, a one-time event at the end of the cruise, will include interactive media, special effects, and a live host for a truly unique, action-packed adventure. 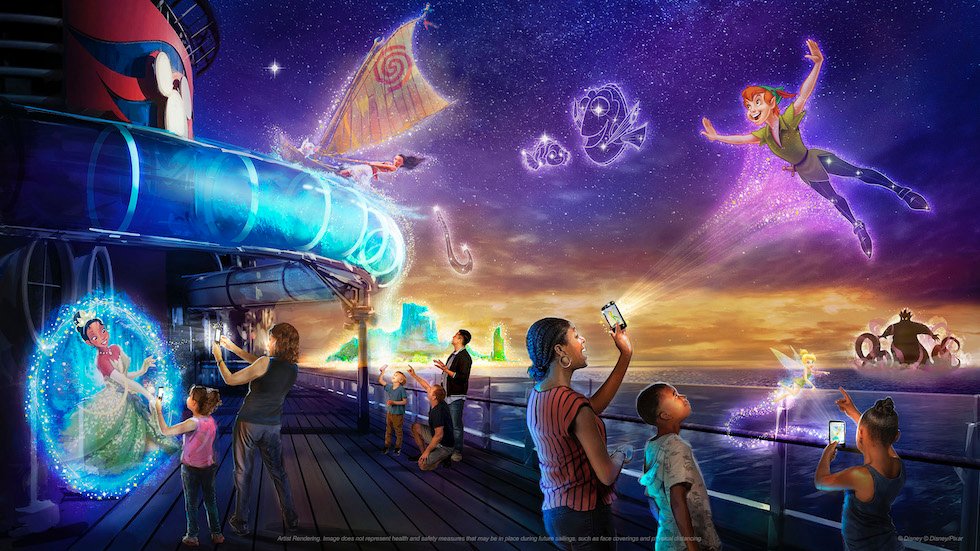 You will need the Play Disney Parks app on your phone before cruising to take part in this magic. If you have already downloaded it for interactive in-queue experiences at Walt Disney World, you’re ahead of the game (quite literally).

Disney describes Uncharted Adventure as a “heads-up experience.” This immersive adventure takes place all around you. So despite being played through your phone, the experience will take you all around the ship and prompt you to interact with it. Think of your phone merely as a tool to bring the adventure to life.

Each family will need at least one smartphone to play; you can share the phone, especially with little ones too young for their own phones, but you can also have multiple devices per party to play the game. 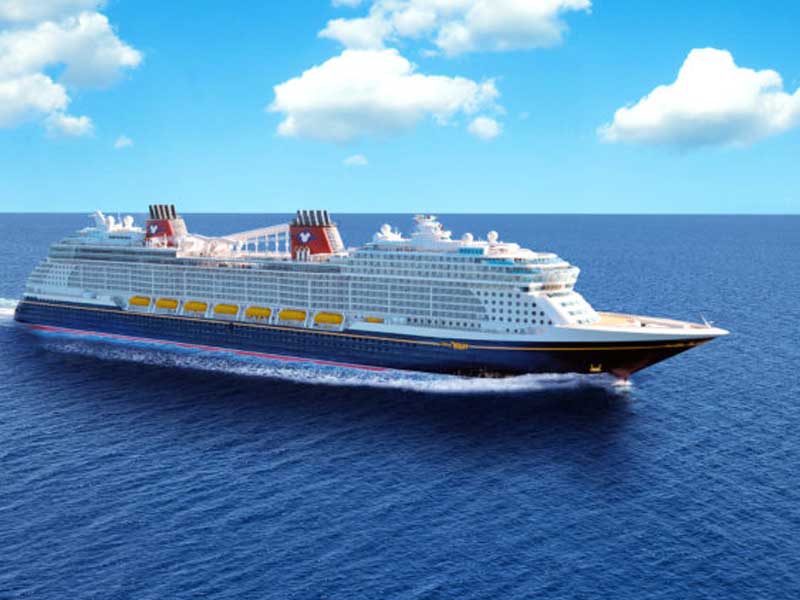 We’re anticipating cruise guests to have a fair amount of questions about this totally new experience. We’ve compiled answers we have to some of those questions, but if you can’t find an answer here, feel free to ask us on Facebook, and we’ll see what information we can find for you.

Can I play Disney Uncharted Adventure without a smartphone?

No, smartphone devices are the only way to play Disney Uncharted Adventure. As long as one member of your party has a smartphone with Play Disney Parks app, you will be able to share the device to play.

How many quests are there in Disney Uncharted Adventure?

As of today, Disney is announcing four quests (Finding Nemo, Peter Pan, The Princess and the Frog, and Moana), but it sounds like we can expect more in the future.

Can I participate in the Disney Uncharted Adventure Finale if I didn’t complete the quests?

Whether you were unable to complete all the quests aboard the Disney Wish or just felt like relaxing poolside for the bulk of your cruise, you can still take part in the Finale portion of Disney Uncharted Adventure. Everyone is welcome.

When should I do the Disney Uncharted Adventure quests?

You can do the quests anytime during your sailing on the Disney Wish. You can even pause in the middle of a quest and go back to it later.

How do the quests work, and where can I find them?

The quests take place via portholes scattered around the ship. These portholes have screens that play out the adventures of each quest, but the controls are all done through smartphones. Disney has not yet announced the number or location of these portholes. 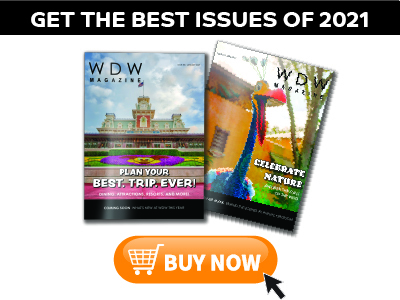 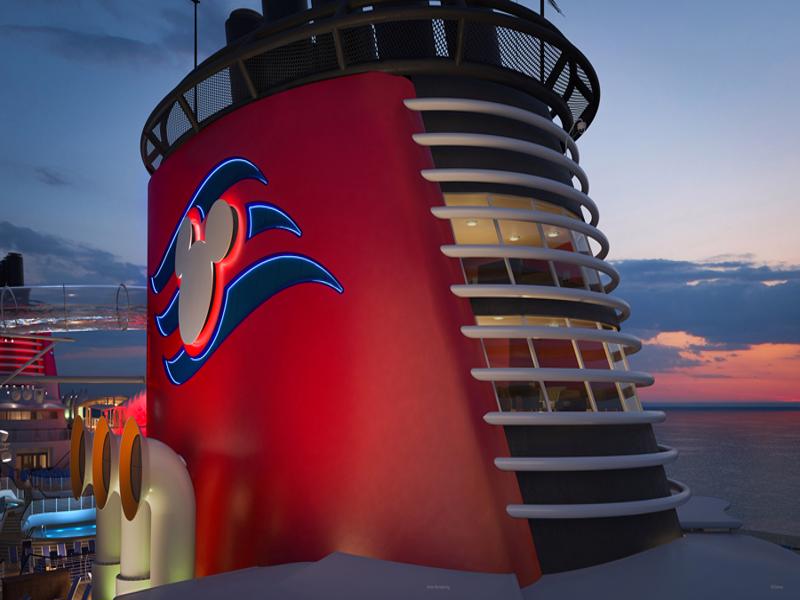 The Disney Wish’s maiden voyage is scheduled for June 9, 2022.

Can’t get enough of the Disney Wish? We’re constantly delivering Disney Wish cruise updates and news on our site and social (so like us on Facebook and follow along on Instagram, and don’t forget to check out our new DCL Magazine Facebook and Insta while you’re at it).

Check out some of the biggest Disney Wish news updates below: