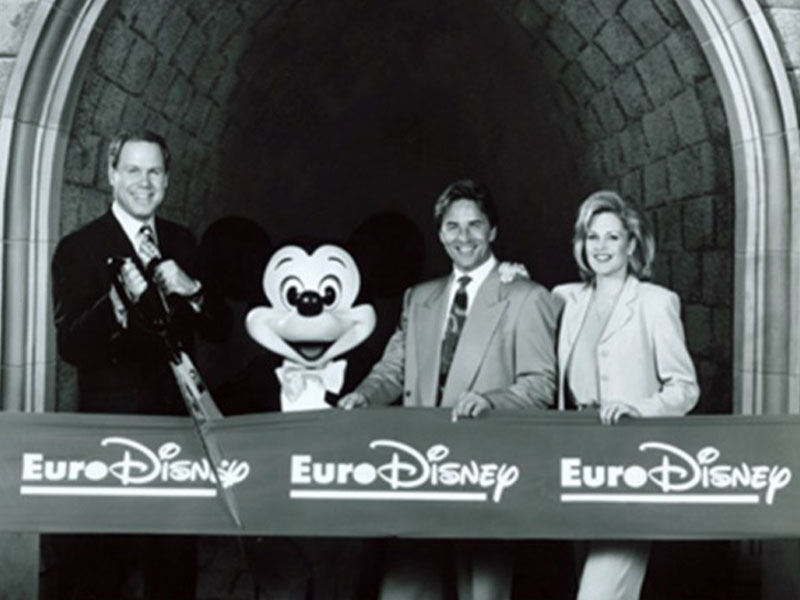 Euro Disney Resort, now called Disneyland Paris, opened to the public on this date. This year, the park is celebrating its 30th anniversary. Head to the blog to see what opening day was like at the world’s first and only European Disney Park. 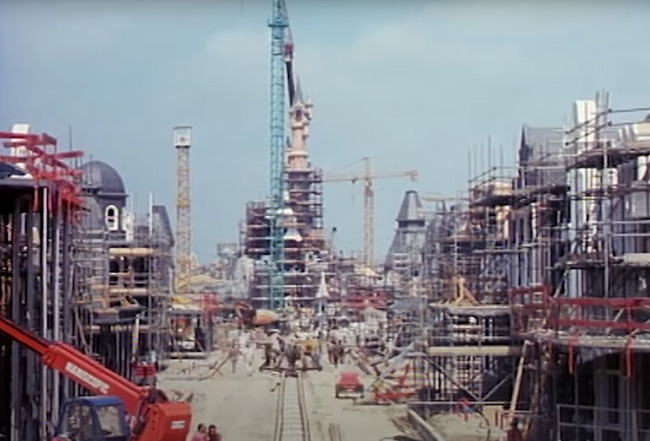 Before we get to the opening day for Disneyland Paris, let’s take a look back at the creation of the most magical theme park in Europe. In 1987, Disneyland Paris became an official project when an agreement was signed by the Walt Disney Company and French public authorities.

According to the agreement, construction would begin the following year for Euro Disneyland, which would be located in Marne-la-Vallée, just a short distance outside of the city of Paris. 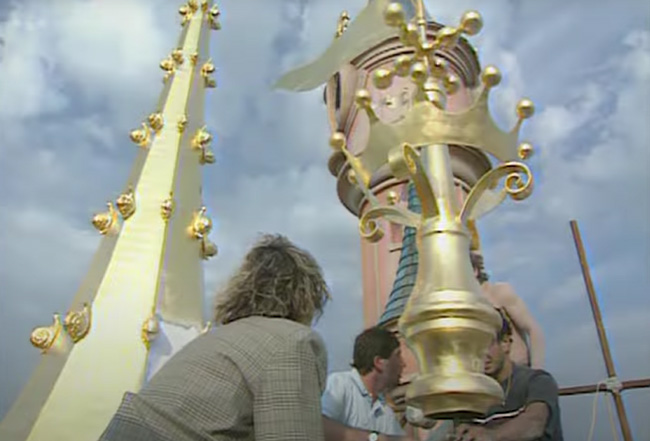 The agreement was signed by French Prime Minister Jacques Chirac and then CEO of the Walt Disney Company Michael Eisner, and while Disneyland Paris has reached its stride today, even in 1987 during the signing of the agreement, some Disney fans and French locals were feeling mixed on the project.

Negotiations that led to the agreement took nearly two years to reach terms that both sides would agree to, with the primary issue being that French officials would only approve work on the resort if it celebrated French culture and the French language. 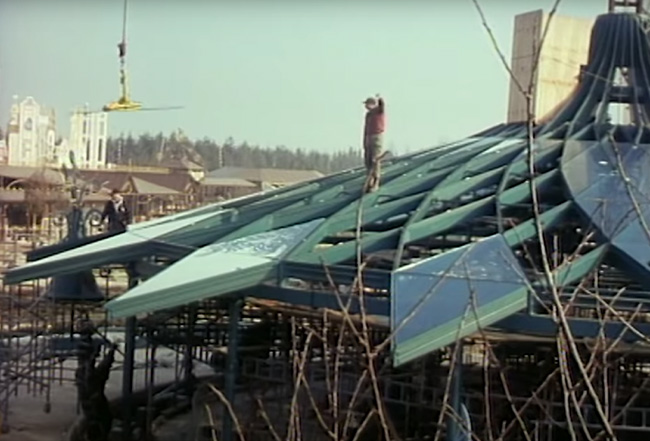 In exchange for Disney agreeing to these terms, the French government supplied the company with a series of low-interest loans to begin work on the resort with the understanding that the terms would be respected and that the project would create 20,000 construction jobs followed by 30,000 Cast Member positions once the resort opened. 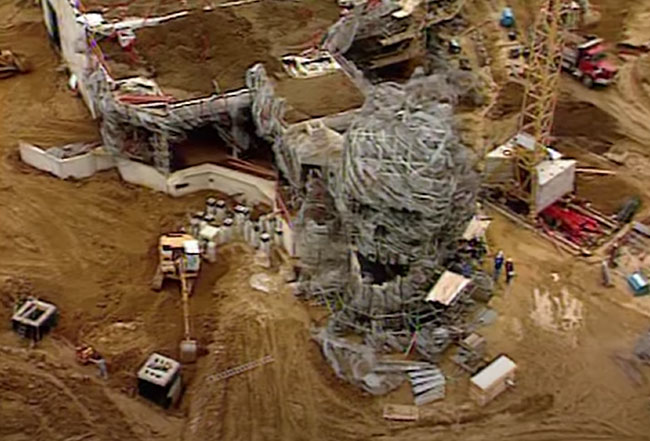 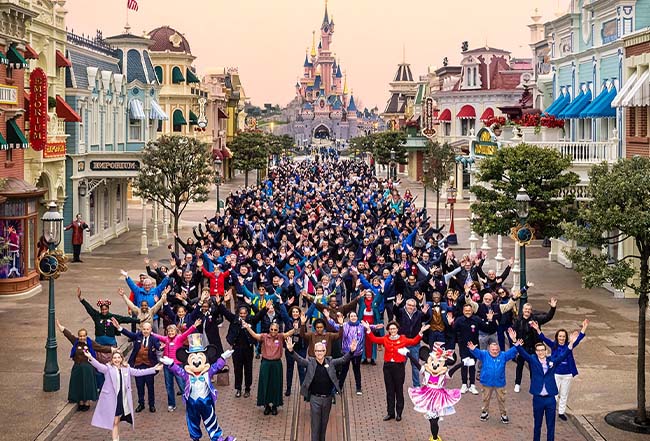 When Disneyland Paris opened (or rather Euro Disney, the name of the resort was not changed until 1994), the property included:

Disney’s Davy Crockett Ranch at Disneyland Paris officially opened the same day as the rest resort, however, it was actually in operation earlier that year. While the rest of the resort was still under construction, the ranch had already been completed and the space was first used to house employees. By fall 1991, the ranch was fully operational and one of its restaurants, Crockett’s Tavern, had even opened prior to the rest of the resort in February 1992.

In the Park on Opening Day 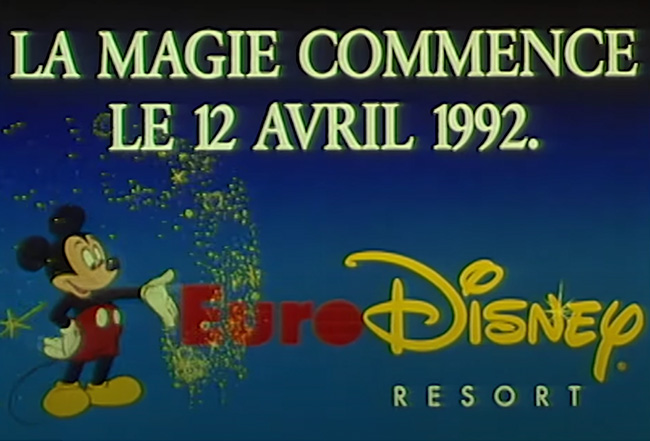 Disneyland Paris itself featured 29 attractions on opening day, and the layout of the park was very similar to the original Disneyland Park with the exception of Discoveryland replacing Tomorrowland, which is largely inspired by the works of Jules Verne and H.G. Wells.

In another notable change from other Disneyland-style parks, Disneyland Paris opened with one of the most unique castle designs Disney had ever created. Le Château de la Belle au Bois Dormant, or Sleeping Beauty Castle did take some inspiration from Germany’s Neuschwanstein Castle, but the design is largely based in Fantasy. 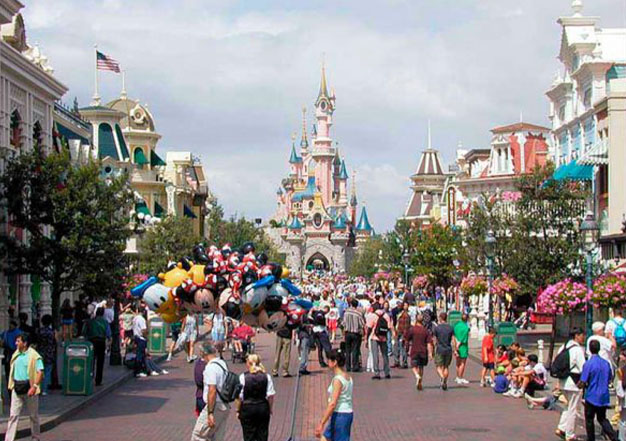 In an effort to appeal to French Guests and tourists from around Europe, a continent that features many historic, grand, and fairly accessible, castles that visitors can experience, Disney Imagineers made the decision to lean even further into the fairy tale design of the castle than they had in other Disneyland parks up to this time.

The result of this reimagining was the breathtaking castle we see today that stands at 167 ft. tall in the center of the park and appears to be lived directly out of a fairy tale.

While Disneyland Paris did see about 11 million visitors during the first year that it was open, the park was off to a rocky start. There were protests by locals with critics calling out the newest Disney resort for promoting American consumerism in a location where residents were more concerned about authentic culture. And, while a definitive reason remains to be confirmed, opening day at the resort was actually rather quiet in terms of crowds.

Bracing for crowds like the openings of other Disney theme parks and resorts, the French government put out traffic advisories and recommended that people avoid roadways going toward the park to alleviate jams. Whether there were actually so few people interested in visiting on opening day, or if that many people were spooked by the prospect of massive crowds, turnouts in the beginning for Disneyland Paris were low for some time. 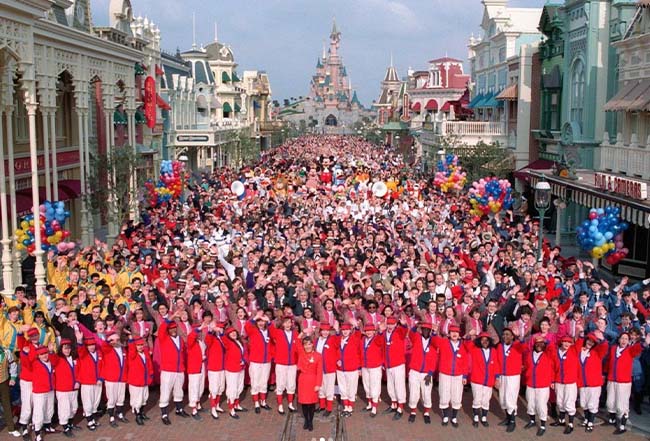 The resort was not a failure though, and sometimes even the rockiest of beginnings can lead to some incredibly magical things. Like all Disney resorts, the park, resort, and hotels continued to expand, culminating in the Disneyland Paris we see today.

In 1996, the Eurostar train began offering direct service to a station right outside Disneyland Paris, a move that helped to bolster visitation from tourists and locals alike. Then the resort expanded to include the Walt Disney Studios Park in 2002, and visitation to Disneyland Paris continued to grow, hitting a quarter billion Guests by 2011.

This year, Disneyland Paris is celebrating its 30th anniversary with a grand celebration full of new entertainment and dining offerings, an exclusive stage show for the events, and enhanced nighttime spectaculars including a one-of-a-kind drone show.

If you have the opportunity to visit Disneyland Paris, this year would be a magical time to explore the parks and resorts, but given the resort’s growth over the past 30 years, we can’t wait to see what the next 30 look like, too!

Minnie’s Pantsuit: A Look at the Polka-Dotted Getup for Disneyland Paris’s 30th Anniversary