by Brittany DiCologero | Nov 29, 2022 | Disney History, News Outside the Parks 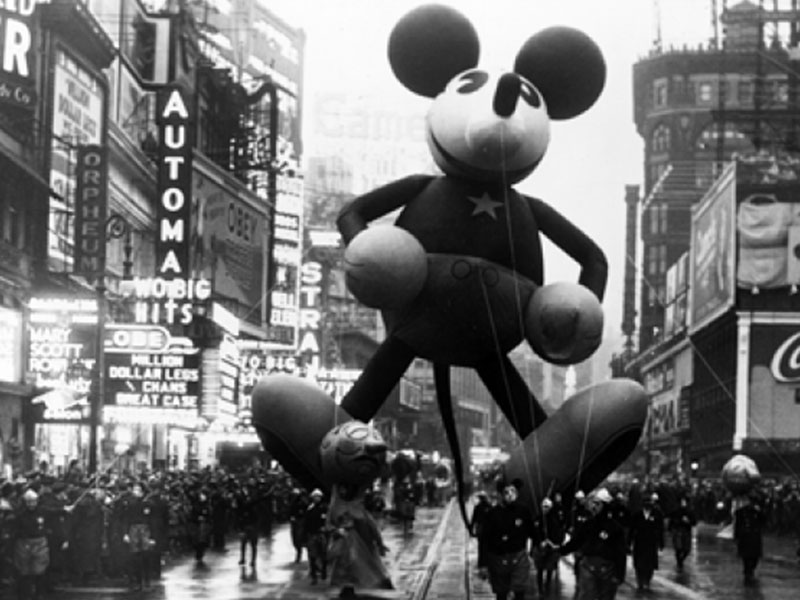 Learn about the history of Mickey and friends as floats and balloons from the first time we saw Disney in the Macy’s Thanksgiving Day Parade.

For Macy’s 11th annual holiday parade (it had multiple names before its current Thanksgiving Day Parade title), Disney debuted its first float in what has become a long history of collaboration.

And not only did a Mickey float parade down the New York City streets, but also Pluto, the Big Bad Wolf, and one of the Three Little Pigs. Read more about that first set of floats—and Disney’s long history with Macy’s—on the blog. 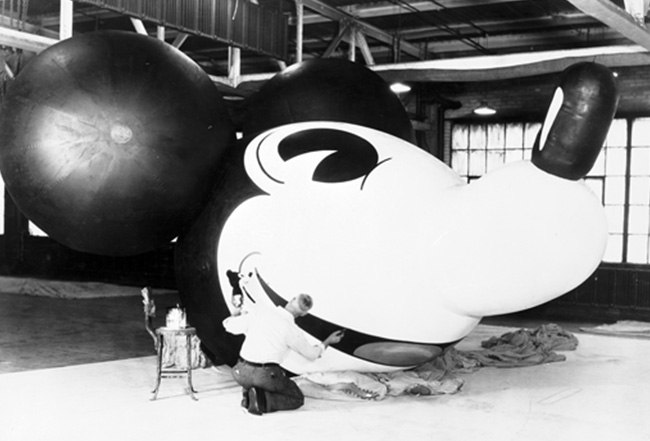 The first parade that would come to be known as the Macy’s Thanksgiving Day Parade took place in 1924, four years before Mickey Mouse would make his debut (and change the world forever) in Steamboat Willie (1928).

By 1934, Mickey had become an incredibly popular character with families across the country. With countless on-screen appearances under his belt and the character’s fame continuing to grow, it only made sense that Mickey would be the focus of Disney’s first appearance in the Macy’s Thanksgiving Day Parade.

The 1934 balloon featuring Mickey Mouse was designed for the parade by Walt Disney and Tony Sarg, the developer behind the helium-filled floats (or balloons) we still see in the Macy’s Thanksgiving Day Parade today. 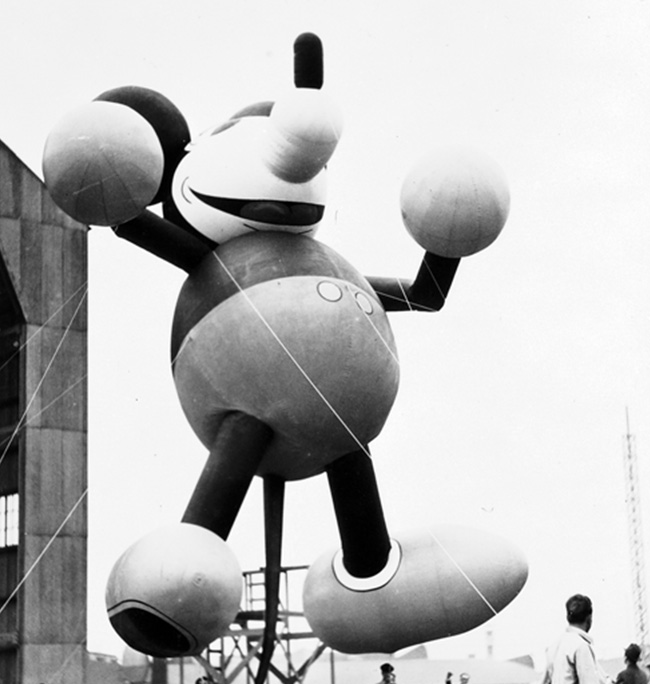 Carrying the ropes that supported the 40-ft. tall Mickey balloon were a team of 25 people dressed up as Mickey and Minnie (like many early Disney character costumes, you may find the look startling compared to today’s styles!)

While Mickey Mouse floated above the streets of New York, several other Disney characters were featured in the parade in more traditional floats. These characters included other popular Disney personalities of the time like a 31 ft. tall Practical Pig and 34 ft. tall Big Bad Wolf from The Three Little Pigs (1933), along with a 12 ½ ft. tall Horace Horsecollar float and a much smaller Pluto float.

Any of the characters from The Three Little Pigs would qualify as rare Disney characters today (in fact, in Disney Parks they are seldom seen, and if they are out it is likely only at special events like runDisney races.) When the Silly Symphony was released a year prior to the parade, however, it was met with a very positive reception for its new animated retelling of the classic tale, so it would have fit right in at a 1934 parade. 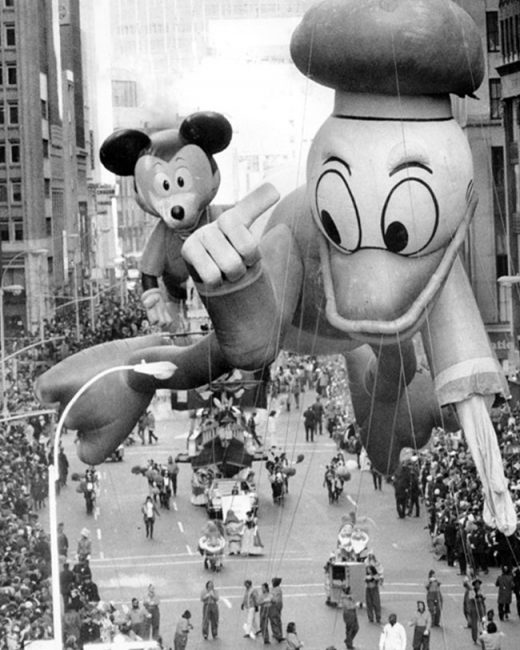 Disney has continued its presence in the Macy’s Thanksgiving Day Parade over the years, lending to new versions of Mickey Mouse over the years along with characters like Donald Duck, Spider-Man, Kermit the Frog, and more.

Donald made his first appearance as a balloon in the Macy’s Thanksgiving Day Parade in 1972, where he appeared with Mickey in celebration of the first anniversary of the Walt Disney World Resort.

In 1992, those who camped out in person for the parade and viewers at home were treated to a Santa Goofy balloon. While he is not a regular appearance in the Macy’s Thanksgiving Day Parade anymore, Santa Goofy has been a popular character meet and greet at Walt Disney World each holiday season. 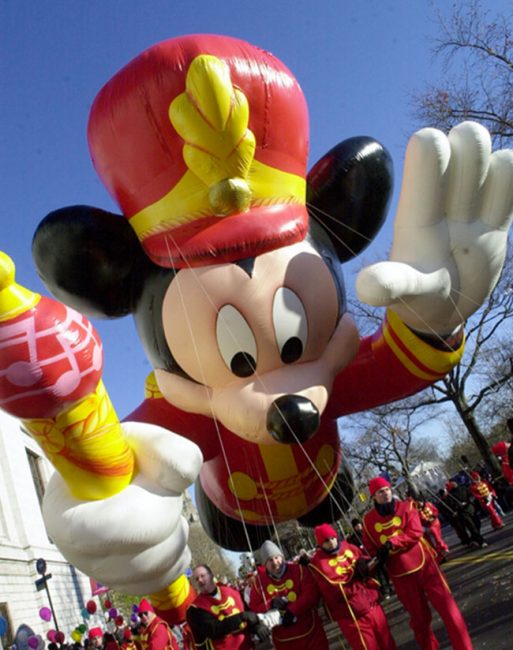 Bandleader Mickey appeared in the parade in the year 2000 to symbolically lead the first Macy’s Thanksgiving Day Parade of the New Millennium. Kermit the Frog appeared off and on throughout the 2000s, with Spider-Man being a mainstay in the parade from 2009-2014.

Most recently, floats have included Olaf from Frozen (2013), Grogu from The Mandalorian (2019), and floats dedicated to Disney Cruise Line. 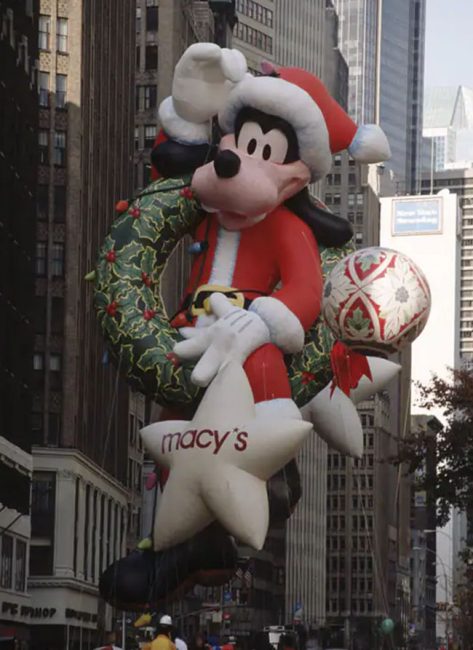 This year’s parade featured the Disney Wish, the newest ship to launch from Disney Cruise Line. As she sailed through the streets of New York, the Disney Wish float featured performances inspired by the new Broadway-style show Guests can see during their cruise called “Disney Seas the Adventure.”

It isn’t just balloons and floats from Disney that have been featured in the parade. Much like the Rockettes and popular musical artists, Disney has had performances take place along the parade route as well.

Some of the most memorable performances on the ground include the full cast of Disney’s Newsies on Broadway and Zendaya from Shake It Up! on Disney Channel.

Which Disney float has been your favorite over the years?