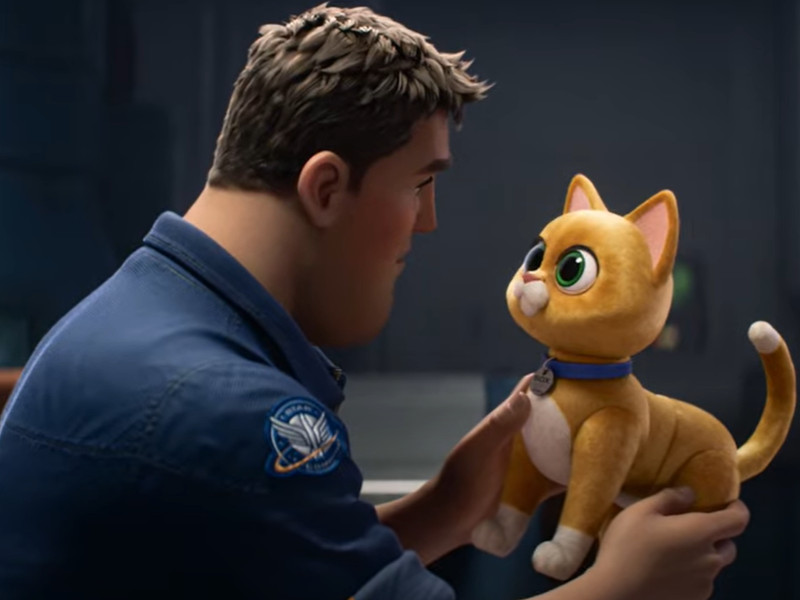 Pixar dropped a new Lightyear trailer ahead of the film’s June 2022 debut, and while it’s great to see what a real-life (Chris Evans) Buzz Lightyear looks like, Sox the cat is clearly the true hero of the film.

The first teaser trailer for Lightyear, the 26th full-length Disney•Pixar film to date, dropped last fall, and the big takeaway from that was shocking: Buzz Lightyear has hair.

But now that Disney has dropped the first full 2-minute Lightyear trailer, we get an even deeper look at the film, which includes terrifying vines reminiscent of Devil’s Snare from Harry Potter, a space mission that involves “getting everyone home” after a year of being marooned on a planet, and, most notably, Sox the personal companion robot cat.

From the brief Lightyear trailer dropped by Pixar today, we get a little more insight into the plot of the film, which serves as the Buzz Lightyear origin story. Buzz Lightyear is not just a toy; he’s a fictional astronaut whose story launched a full merch line. He’s kind of like Figment, really.

In the trailer, we learn that Buzz and his team have been marooned on a planet for a full year, and now a 4-minute flight will determine their fate.

Here’s What to See in the Lightyear Trailer

I’ve watched the new Pixar trailer for Lightyear an embarrassing amount of times. Here are my can’t-miss moments:

Buzz Gets a Wedgie

Buzz picks a wedgie in the new Lightyear trailer. Photo courtesy of Disney/Pixar

Our heroes really are just like us. At the 0:06 second mark, watch Buzz pick an actual wedgie in his spacesuit.

Here’s hoping for a WALL•E cameo. Photo courtesy of Disney/Pixar

As a major fan of WALL•E, I was excited to see what a large roll robots play. Buzz seems to work with a number of robots on his daily tasks, but robots also serve as the villains in his tale. (Zurg, anyone?)

But the most important robot of all has got to be …

The trailer introduces us to the character who is likely to steal the film (and command a huge line of merch at retailers everywhere). Sox is Buzz’s personal companion robot.

From providing white noise to wearing a cute pink bandage on his forehead, he has the whole adorable sidekick thing down to a science.

Who voices Sox in Lightyear? Peter Sohn. Sohn is no stranger to Pixar films, with credits in The Good Dinosaur, Monsters University, Ratatouille, and Luca.

The animation in the film is next level. Photo courtesy of Disney/Pixar

Pixar’s computer animation leads the industry and has since Toy Story originally reached theaters. But looking back at the original Toy Story it’s amazing to see just how far Pixar has come.

I was particularly impressed with the launch sequence, full of changing colors and shadows on Buzz’s face (and the additional level of light refraction that’s accounted for thanks to his space helmet) as he reaches Hyper Speed.

Can we just all agree that any film that involves David Bowie in any shape or form is inherently better? Bowie’s “Starman” serves as the anthem for this film, and I get chills every time it starts to play at around the 0:50 mark in the trailer.