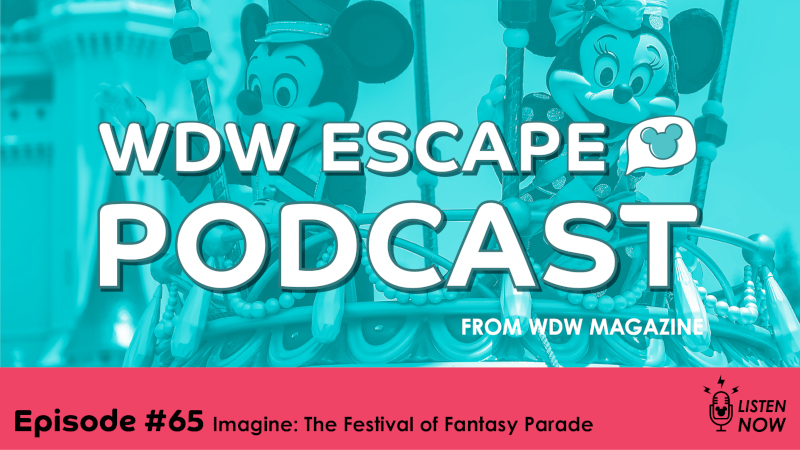 This week on WDW ESCAPE, take a journey of the imagination with us, as we IMAGINE The Festival of Fantasy!

For more info on WDW Escape, click here– or listen to all our episodes. Listen to today’s Imagine: The Festival of Fantasy episode while following along with the transcript and photos below!

Imagine- The Festival of Fantasy 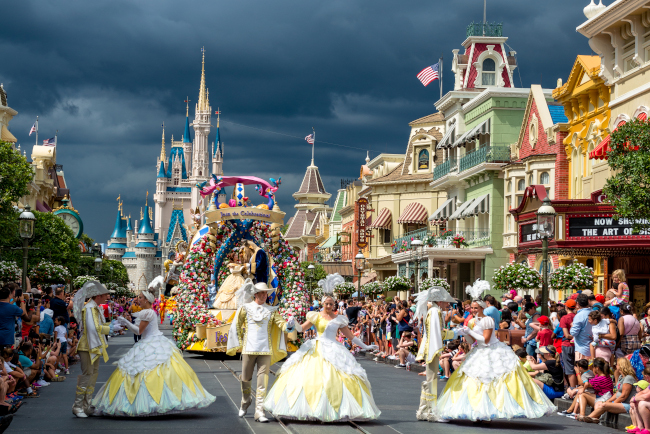 The August Issue of WDW Magazine is the “Fairy Tale” issue, and there is nowhere better at making dreams come true than Walt Disney World.

Many of our most beloved Disney friends come straight from the world of fairy tales, and at the Most Magical Place on Earth they have an entire land to call their own; Fantasyland.

But every day this armada of princesses, princes, pirates and more sail forth through the heart of the Magic Kingdom in a display of might, and prove beyond a shadow of a doubt that Fantasyland is the most beloved realm in the kingdom and that fairy tales will always rule in the hearts of Disney-loving children of all ages, from the tall to the small.

Or rather, they used to do that. But for reasons that we are all tired of, we haven’t been able to crowd along Main Street and celebrate with this beautiful parade in quite some time.

We hope the very near future will allow for the triumphant return of this much-loved Disney tradition, but in the meantime, let us wait patiently together and remember the wonder and majesty of the Festival of Fantasy Parade.

The trumpets sound a fanfare fit for royalty. “Hear ye, hear ye. Ladies and Gentlemen, boys and girls; welcome to the Magic Kingdom. You are warmly invited to join Mickey Mouse and his Fantasyland friends for a magical celebration in the streets!”

“Dreams will come true and you will become part of the magic. For the time has come to take your places and prepare to welcome the wonderous and wonderful Disney Festival of Fantasy Parade!” 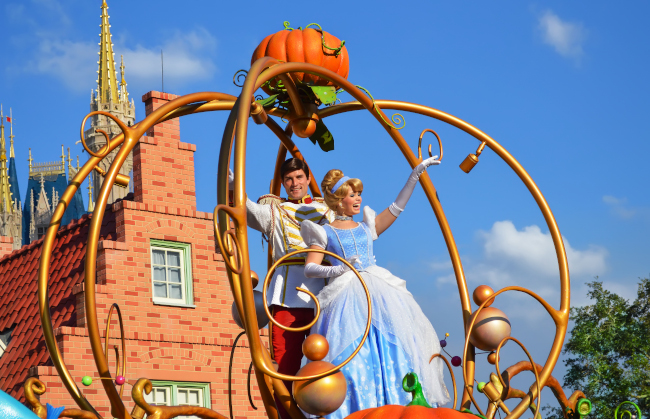 If we imagine it together, it almost appears before us, rolling toward us from the Castle Hub, sweeping down Main Street USA like a force of nature, the excitement of the crowd growing into a fevered pitch, as we glimpse the details we remember and love.

A procession of royal courtiers in yellow lead the way, as the Princess Garden float rolls into view, festooned with flowers, and carrying a royal assembly.

Belle and Beast dance on the front of the float, and you can feel the youngest members of the audience begin to shake with excitement already… but we aren’t done, not be a long shot.

Cinderella and Prince Charming are here, and Tiana with Prince Naveen, and at the very tail end, the flowers give way to a snowy wonderland and Anna and Elsa wave to the star-struck crowd.

It was at this point, on the first of many visits, that my daughter began to jump up and down, which she would not stop doing until the parade was over.

She isn’t four years old any more, and hardly ever jumps, but when I remember my Festival of Fantasy, that little girl is still there, bursting with excitement, perhaps like someone you remember?

What’s next? Dancers dressed for the lantern festival? The mime from the Snuggly Duckling? Can this longboat be the property of Princess Rapunzel?

Yes, it can! Together with a smoulder-worthy Flynn Ryder and a very serious-looking Maximus, the crew of Tangled brave dangerous-looking pendulums and a horde of ruffians in their quest for adventure. 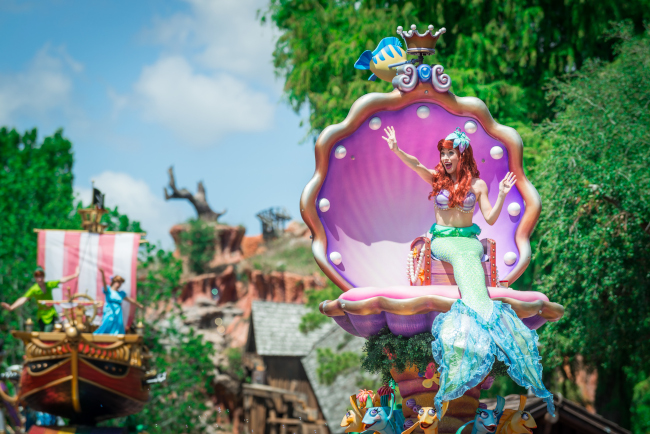 Magic and music under the sea come next, with Ariel riding high above on a sea-shell throne atop a majestic music-box celebration of favorite characters, accompanied by dancers in truly outrageous and stunning costumes.

The crowd is overwhelmed now, and likely to stay that way. We are completely under the power of the fairy-tales; thousands of happy people bopping and weaving together to the music and the magic.

Captain Hook hasn’t given up, though. He clings to the anchor, far below, ready to make one last, desperate play for vengeance. The massive form of Tick-Tock the crocodile, following behind, does not bode will for Hook, but it enchants the young pirates in the crowd.

A float shaped like a massive bagpipe, preceded by kilt-wearing highland dancers? It can only be Princess Merida, saluting and waving as she rides in glorious independence to the delight of the crowd, at least one of whom is still jumping up and down in my memories.

And what happens next? Only the most staggeringly astounding thing that I could possibly conceive in a parade already full of amazing things.

Can you imagine going to work and even suggesting the construction of a Maleficent in dragon-form, reimagined as a clockwork, steampunk automaton? That’s the sort of thing that is inconceivable anywhere else in the world, but just another day at the office in Walt Disney World. Fifty-three feet long, and twenty-six feet tall, fully articulated and majestic.

This dragon would be astonishing even if it didn’t breathe fire and battle Prince Philip, but of course it does. Can you remember your amazement the first time you saw it? That magic will live with you always, and make you want to experience it again and again.

How do you top that? What on Earth do you do for a finale? How about a massive procession of fairy-tale favorites from Pinocchio, Snow White and the Seven Dwarfs, Alice in Wonderland and more?

Monstro the Whale! Dumbo and his pink elephants! Donald and Daisy Duck and a cornucopia of extras from Fantasia!

And just in case all of that was too subtle for you, here come Chip and Dale, and my spirit animal, Goofy, followed by the world’s most famous Mice in an enormous and staggeringly beautiful hot air balloon. Magnificent.

Yes, it is worth waiting patiently for such a special experience to return. It may be hard to imagine, but one day soon we will crowd along the street together and share our amazement all over again. And it will be strange at first, but we will remember, because Disney people are good people.

I remember one early visit when we were scampering, looking too late for a parade viewing spot, when a man standing right behind the rope along Main Street USA caught my eye.

He was standing with a teenaged boy, who might also have become a little too old and a little too cool to jump up and down. The man pointed to my kids, took a step back and pointed to the space in front of him, right behind the coveted rope.

We took our cue, and bundled the kids into the spot offered by our new best friend, taking a spot a few feet further back, with the other tall people, while my kids enjoyed the most perfect view they had ever had of the most perfect parade that there ever was. 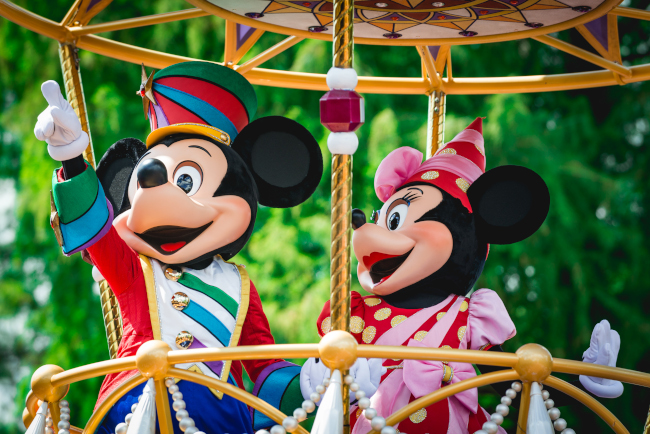 Sometimes you wish that you had said a proper thank-you after it was too late, and I’m happy to say this was not one of those times. I shook that man’s hand and thanked him from the bottom of my heart for his kindness, and the way he made their day when he absolutely did not have to do so.

He seemed a little overwhelmed, as if he hadn’t done anything special, but I saw the look in the eyes of the teenager standing with him.

He knew darn well that his dad was a great guy, and he was proud to see him get the thanks he deserved for what was probably only one of the random acts of kindness he had done that day.

The look in that boy’s eyes has stayed with me, and I fight to remember to be worthy of such light myself.

When we can all at last come together again, if we can all try and bring a little of that kindness to the way we share our experience with others, the magic will be very real, and more than just a Fantasy.