The Tower of Terror: THE WDW ESCAPE PODCAST (EPISODE 71) 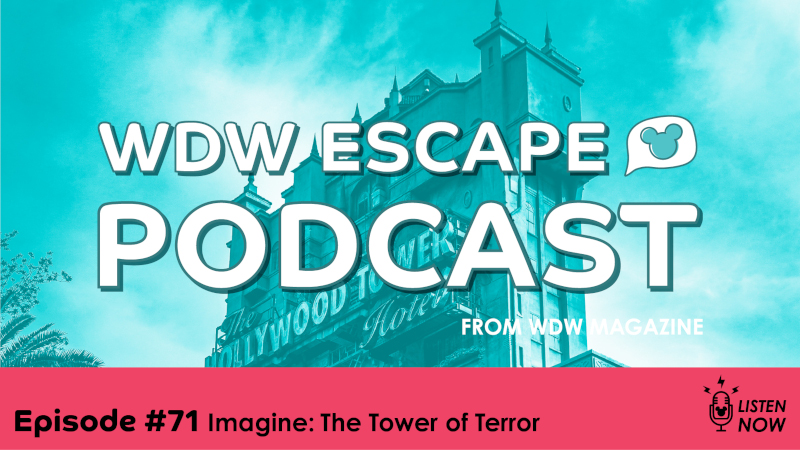 This week on WDW ESCAPE, take a journey of the imagination with us, as we IMAGINE The Tower of Terror!

For more info on WDW Escape, click here– or listen to all our episodes. Listen to today’s Imagine: The Tower of Terror episode while following along with the transcript and photos below!

Imagine- The Tower of Terror

Welcome to WDW Escape, presented by WDW Magazine. The September Issue of WDW Magazine is the “BOO to You” issue, and all month long we are celebrating with tricks and treats from the Most Magical Place on Earth.

Today we step beyond the limits of this dimension for a new adventure in fright, even if it is all in good fun, as we Imagine the Twilight Zone Tower of Terror!

Presented for your consideration: Another sunny, perfect day in central Florida at Disney’s Hollywood Studios. The park is bustling with happy parents and children as they prepare for a day in which they will pilot the fastest hunk of junk in the galaxy, sing-along with Anna and Elsa and ride a fantastically oversized Slinky Dog into the wild blue yonder.

But something is amiss in this oasis of family-friendly fun. An intermittent chorus of genuinely terrified screaming coming from just over… there. It can only be that most apoplectic of attractions… The Twilight Zone Tower of Terror!

The Twilight Zone is an American television anthology series, created and hosted by Rod Serling, who also wrote 80 of the show’s 156 episodes, presenting them in a signature, clipped manner which is one of the show’s best-remembered elements.

The series has been described as ‘Ordinary people find themselves in extraordinarily astounding situations, which they each try to solve in a remarkable manner’, and that is certainly true.

For five seasons beginning in October of 1959, millions of Americans visited the Twilight Zone for a taste of science-fiction, horror, suspense and drama bordering on the macabre.

Two television revivals and a feature film have helped to keep the franchise in the public imagination, but it is still the black-and-white original series that is best-remembered and beloved. 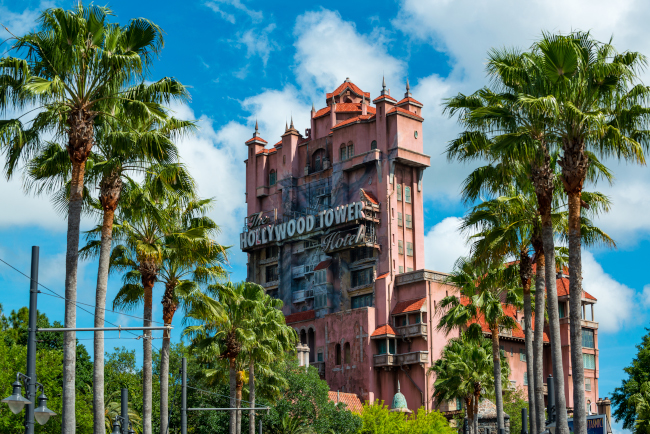 So how did this archetype of early television come to fright-tastical life in a Disney theme park? Well, in 1994, when the attraction debuted, park elements like Galaxy’s Edge and Toy Story Land were not even a gleam in an Imagineer’s eye.

The Disney Renaissance had begun to refresh the company’s pool of beloved intellectual properties, but there were not yet so many waiting to be incorporated into the theme parks that it seemed ridiculous to license the rights to a classic series from CBS.

The park was then known as Disney-MGM Studios, and was themed from top to bottom in the glory days of classic Hollywood. The nostalgic Twilight Zone episodes must have seemed like a natural fit, and it was felt that competition from new, scary rides at other Florida parks were a challenge that had to be met head-on.

Could Disney create a thrill ride with the same devotion to story and imagination that had made their family-friendly creations so iconic? Perhaps we can answer that best in the style of the show that inspired the attraction, as we cross the border into another dimension unlike any other. We are travelers on an uncanny road.

Our destination: the Twilight Zone.

Weary from a long day of travel, you search the darkened streets of Hollywood for a place to spend the night. You hear of a nearly forgotten hotel that might serve the purpose, and find yourself on a long and winding path, surrounded by fellow travelers, all inexplicably drawn to the same destination.

You look up suddenly to discover the Hollywood Tower Hotel, looming before you, more foreboding fortress than welcoming oasis.

The building is in ruins, scarred by some long-ago event, but night is falling and you must find a place to lay your head. You step through the doors and discover, not a faded monument to the boulevard of broken dreams, but a museum of the macabre; a collection of eerie relics, lost in time and space, or perhaps even somewhere infinitely stranger. 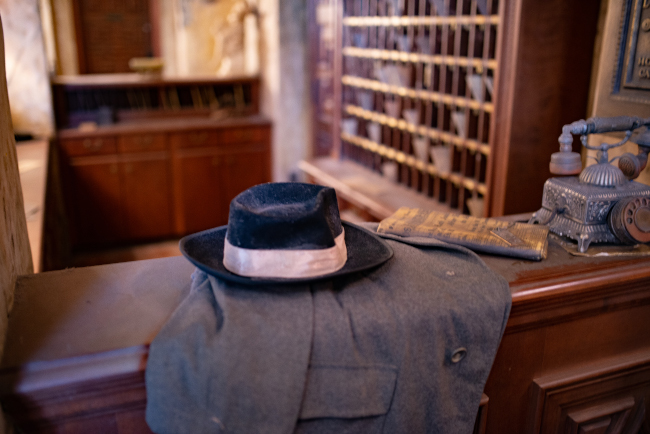 A voice calls out to the assembly of strangers, urging you to step forward, and you find yourself compelled to obey.

You step into a musty library that houses endless numbers of stopped clocks, all bathed in cobwebs and dust, above a television screen that suddenly flickers to life, producing an image of a wooden door, spinning in an infinite void of blackness.

“You unlock this door with the key of imagination”, a man’s voice intones seriously. “Beyond it is another dimension. A dimension of sound. A dimension of sight. A Dimension of mind. You’re moving into a land of shadow and substance, of things and ideas. You’ve crossed over into… The Twilight Zone.”

The images change now, and you behold the very same long-abandoned lobby you have just passed through, but bustling, gleaming and vibrant with the dreams of a city that is built on such fantasy. A typical night in Hollywood, 1939.

But this night is to be different, to say the least. On the screen, a bolt of lightning tears through the darkness and disintegrates the Hotel’s former façade. The power courses through the elevator, where five passengers are instantly erased from this dimension; cast into the infinite emptiness… of the Twilight Zone.

Will you share their fate? A voice challenges you to ride the service elevator into that land of the inexplicable, if you dare. 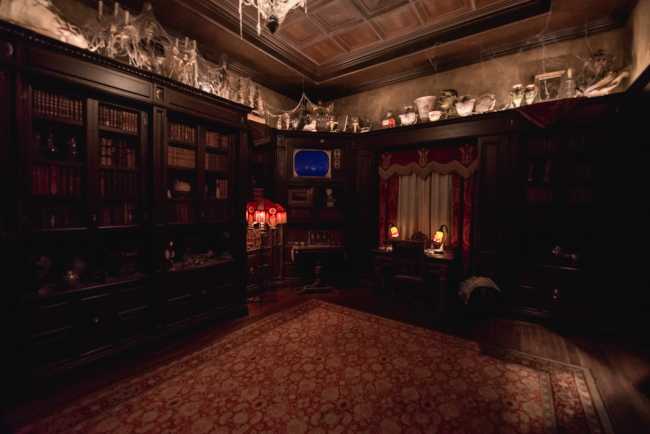 You and the tribe of strangers all around you step forward at the urging of the unseen voice, leaving the library and entering the labyrinth of the boiler room, a maze of pipes and ducts that seems to lead nowhere.

Suddenly, from the darkness, an elevator operator appears, wearing an immaculate red and gold uniform of a bygone age, urging you to step forward through the opening doors before you. The space revealed is like no elevator you have ever seen.

Rows of seats and safety restraints fill the car, and you are commanded to strap yourself in, in a manner that suggests you have little choice. Row by row, you fill the car, hoping against hope that this adventure is almost at an end.

Without warning, the operator is nowhere to be seen, and the doors have sealed behind her, leaving you in darkness. Five spectral forms appear, the long-lost passengers, now bathed in living lightning, urging your car to move, not up, but forward, and astonishingly, it begins to obey.

Stars appear through suddenly translucent walls, glowing with otherworldly light as your car roams the hallways of the hotel, past artifacts of this unknown world.

“You are about to discover what lies beyond the 5th dimension. Beyond the deepest, darkest corner of the imagination…. In the Tower of Terror.” 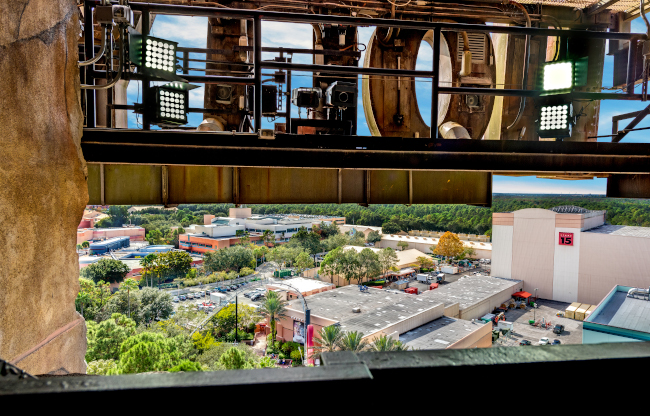 Logic decrees that what happens next takes only seconds, but logic has no place within the Twilight Zone. The earth seems to give way beneath your car as it is swallowed up into pitch darkness, plummeting down, down into the limitless void below.

More than plummeting, much more than merely falling. You are accelerating… racing as if pulled down by an unseen force at ludicrous speed, feeling your insides turn to jelly and slosh around within. You hear a terrible noise and realize it is you, screaming in genuine terror.

Down, down… then up, is this salvation? No, down again, who can say how far or how long. And just as suddenly you rocket up once more… as if you might burst through the top of the building.

You glimpse a moment of sweet, precious daylight, just for an instant, and then you are falling again… faster… faster… and then, impossibly… you stop.

Just as suddenly as it began, it is over. You are passing back through the unseen boundary that marks the limits of the 5th dimension. The five spectral forms recede into darkness, perhaps finally freed through your fright.

As the lights return and the doors open, the voice once more returns to warn you to never again check into a deserted hotel in Hollywood, lest you become a permanent resident…. of the Twilight Zone.

But in your heart, you know that you can never stay away.