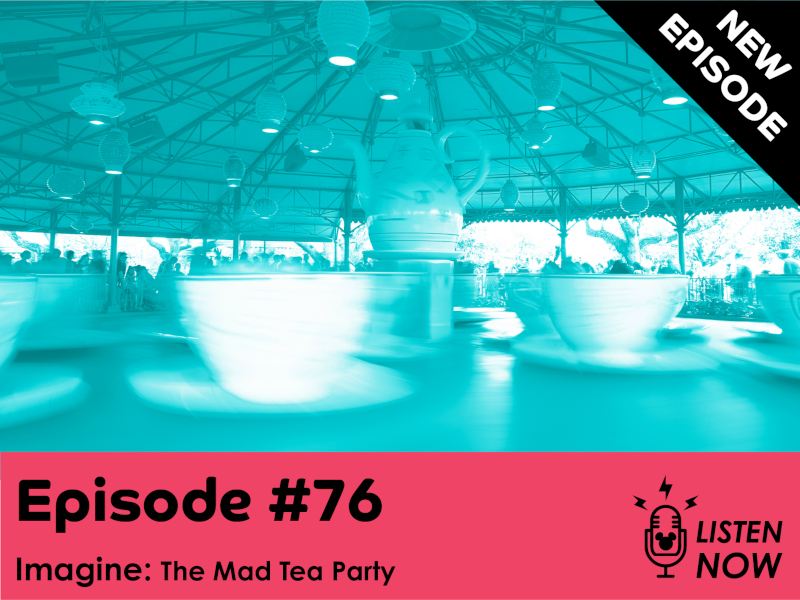 This week on WDW ESCAPE, take a journey of the imagination with us, as we IMAGINE The Mad Tea Party!

For more info on WDW Escape, click here– or listen to all our episodes. Listen to today’s Imagine: The Mad Tea Party episode while following along with the transcript and photos below!

Welcome to WDW Escape, brought to you by WDW Magazine.

The October Issue of WDW Magazine is a very special celebration of the Magic Kingdom and the 50 years of wonder and joy that it has brought to the world. Here at WDW Escape, we are playing along and featuring some of the attractions that have delighted Disney Adventurers of every age since that Magical Day in October of 1971.

This week we celebrate this Very Merry Un-birthday in the most Disney of manners, with a Mad Tea Party!

People of all shapes and sizes, from all over the world, coming together in the spirit of fun, adventure and magic. That number seems so incomprehensibly vast. What could we all possibly have in common, all of the untold millions who call Walt Disney World home?

Well, if your family is at all like mine, you know that there is something special about the time you spend with your Disney friends.

These are the people who “get it”. The people who understand this passion, this obsession, this need to trade pins, to eat popcorn on Main Street, and to wish upon a star that “next time” will come soon.

Time passes differently when we are with one other, and it only takes moments for strangers to become old friends while sharing stories, or singing a chorus of “Great Big Beautiful Tomorrow”. 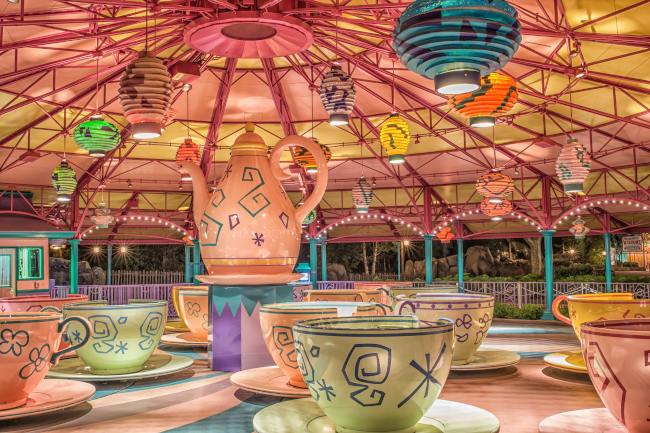 A single moment of which we all share memories, regardless of who we are and where we come from? I put it to you that there just might be, and it is shaped like a teacup. Yes, friends, I propose that the Mad Tea Party just might be the single experience that all of those millions of old friends who just met share in.

It certainly fits the first requirement, it is an Opening Day Attraction, a badge of honor that newer, flashier attractions can never buy, not with all of their First Order stormtroopers and flying banshees.

The truth of the matter is that the streak goes back much further than that. The Mad Tea Party was an opening day attraction at Disneyland resort in California on July 17, 1955.

It missed opening day at Tokyo Disneyland, but has been spinning madly in that Fantasyland since 1986, as “Alice’s Tea Party”, which may be less correct from a narrative perspective, but at least gives the star top billing.

All of which leads to the conclusion that The Mad Tea Party may very well be the most universal Disney Parks experience worldwide, but that is a question for another day. 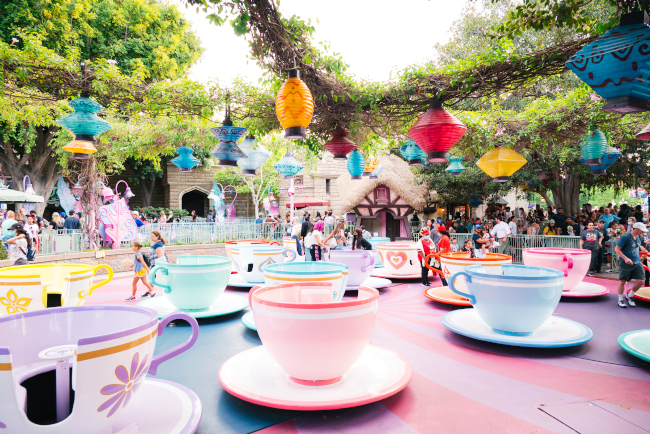 Originally the Disney World version of the attraction was an open-air courtyard much like its big brother in Anaheim, until it became very obvious that there were differences between constructing a theme park in a literal desert, as opposed to the Florida wetlands.

The roof was added in 1973, and the ride has changed very little in all of the years since. Think about that. All of those years, all of those happy park guests.

Some only want to ride a few rides, some are there for nothing but. Some love the thrill of roller coasters, the bigger the better… others blanche at the sight of the Barnstormer.

I have met seemingly very nice people who find dark rides boring, and more than a few children who are scared of the dark. I am even told, though I find it difficult to believe that some folks do not ride It’s a Small World because the song drives them around the bend.

But everyone rides The Mad Tea Party, don’t they?  No height requirement to grow into, a queue that moves quickly and is at least partly shaded from the sun… no sudden drops, no heights, just a minute and a half of dizzy delights and off you go.

In fact, other than being a bit of a squeeze for some of us more “Pooh-shaped” guests, there is very little reason not to climb aboard those teacups and bask in the sheer Disney-ness of it all. 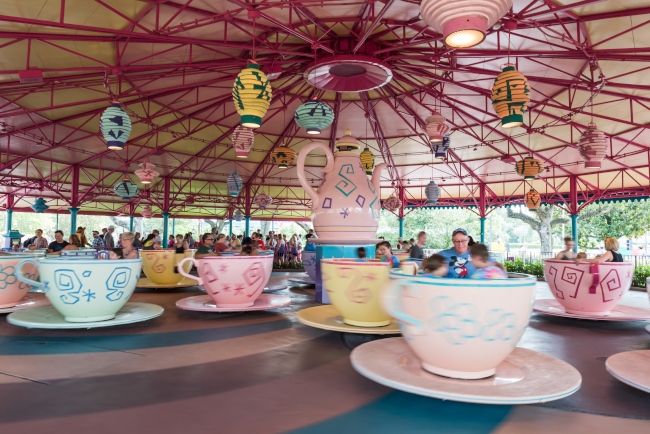 Now I hear those of you who are calling out your votes for Pirates, or… well, just about every attraction at Walt Disney World has millions of devoted fans who love it more than they can say.

I hear you and you are not wrong. But let me counter with this: 18 Teacups. You heard me. One big turntable turning counter-clockwise, holding three smaller turntables turning clockwise, each of which holds 6 teacups.

18 teacups, each one seating 1 to 3 riders at a time. 58 million guests each year. Fifty years of magic. Even if you only rode it once, just imagine the incredible people who you have shared a teacup with. People from every country in the world, speaking countless languages.

Superbowl MVPs , crowned heads of Europe, captains of industry, your Uncle Pete, that lady from the bank who always wears the Mickey pin, all of us sharing 18 little teacups and a happy, magical experience and leaving ready for the next time. A literal Small World after all.

Now there is one group of people for whom the Mad Tea Party is no dream. The persistently motion-sick are often warned that going around and around and around might not be the best way to settle that churro, and I can report that this is true.

My own wife, who is infinitely braver than I will ever be, who laughs in the face of Everest while some of us are quietly getting a Mickey pretzel elsewhere, is also in that group of poor, unfortunate souls.

She is wise enough to know that one spin with the Mad Hatter would put her out of sorts for days, and leaves this one to Dad. But she has always participated in her own way.

On every trip she has taken the same home video of her family crammed into a cup, going round and round, peppered at first with wry off-camera commentary, which eventually peters out around the same time as the camera work becomes a little less precise, as if to suggest that even just watching is getting to be a little too much for her. 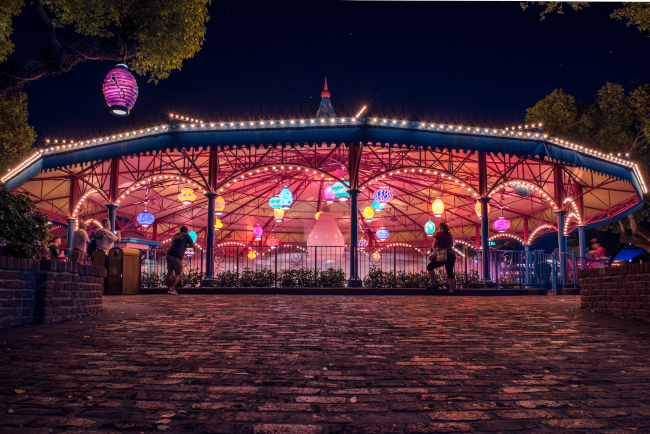 Maybe there isn’t a single experience that every visitor to Walt Disney World has shared in. There is so much to do, and never as many hours to do it in as we might wish for.

There are millions and millions of us, after all, each with our own wishes and dreams of the perfect Disney World experience to fulfil.

One thing we can all agree on is that there is no where else we would rater be than in this magical place, and no one we would rather share it with than our millions and millions of Disney friends.