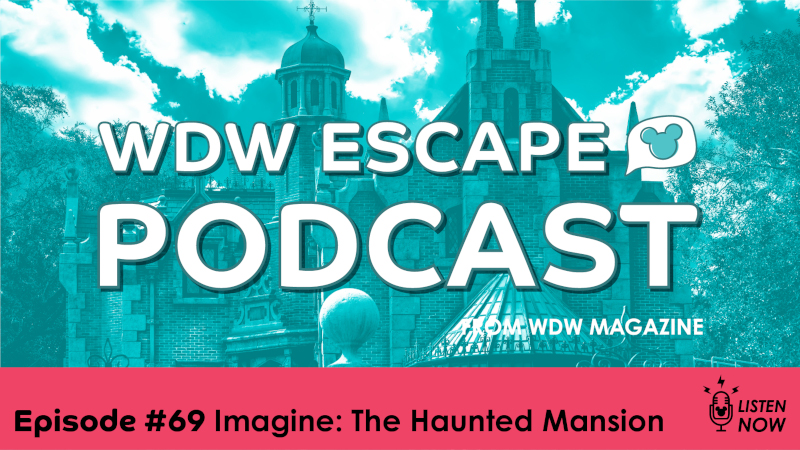 This week on WDW ESCAPE, take a journey of the imagination with us, as we IMAGINE The Haunted Mansion!

For more info on WDW Escape, click here– or listen to all our episodes. Listen to today’s Imagine: The Haunted Mansion episode while following along with the transcript and photos below!

The September Issue of WDW Magazine is the BOO To You Issue, and in celebration, we will be spending the month with some of the spookiest experiences that the Most Magical Place on Earth has to offer.

This week, climb aboard the Doombuggy of your imagination and Escape with us to a special memory of the most fiendish attraction of them all – The Haunted Mansion. 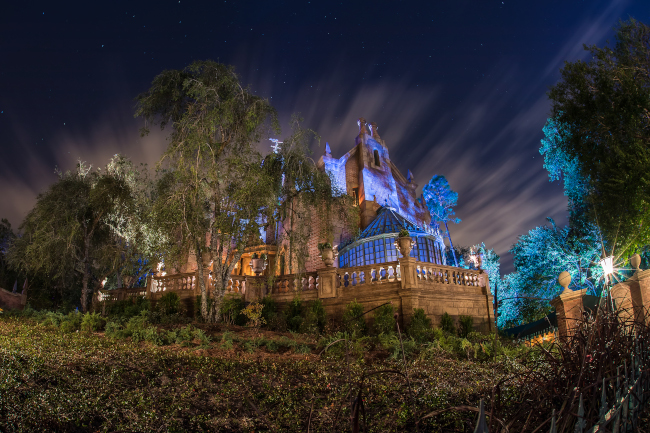 “Daddy, what was your favorite ride?” my son asked as we bundled into our airplane seats at MCO, on our way home from our first ever Walt Disney World vacation. He had spent most of the last hour extolling the virtues of It’s a Small World in painstaking detail, so the question didn’t surprise me, but I found myself without an answer.

“I don’t know, honey,” I said “I guess I liked whichever one we were doing at the time the best.”

Even at seven years old, he knew a parental cop-out when he heard one. “You can’t like them all the best,” he insisted, and, of course, he was probably right, but I honestly didn’t know the answer. Like all newly minted Disney Dads and Mickey Moms, I had been so focused on making the trip perfect for them, I had never really found “my ride”.

With a little maneuvering, I changed the subject, and asked what things we didn’t try this time that they thought they would be ready for on our next visit, which was, of course, already in the planning stages.

My daughter, the burgeoning coaster monkey, declared that next time she would be ready for Big Thunder Mountain, but my wife and my son had a different answer that surprised me more. The Haunted Mansion.

I was a little shocked. I’m not really one for jump-scares and I hadn’t even considered adding a haunted house to our plans.

But I had been impressed many times in the last week by how much the kids were actually ready for, and by just how much better Walt Disney World did everything you care to mention, and so I made some elaborate promises there on the tarmac that I wrongly assumed everybody would soon forget.

Next time, the Haunted Mansion for sure. 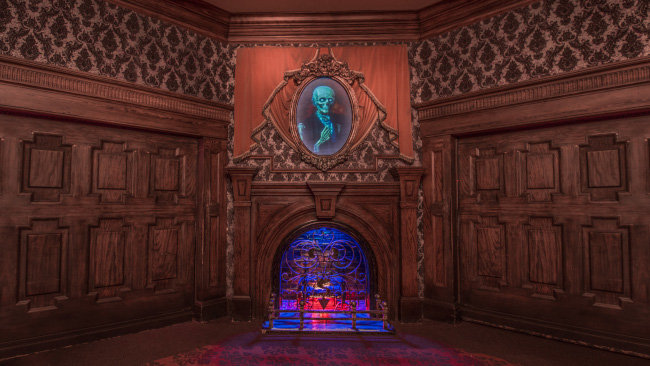 And so it was that, upon our triumphant return to the Magic Kingdom the next year, we found ourselves cruising through the Fast Pass line, on our way to an experience I still thought we might regret.

I couldn’t get a read on this ride. Was it actually scary, or was it all in fun? The more people I asked, the more it seemed that the answer was ‘both”, which seemed impossible. But a promise was a promise, and you never leave a Fast Pass on the table, so off we went.

We approached the main doors in an amiable cluster of guests, some with nervous anticipation like me, others reading epitaphs from nearby tombstones that sounded like old-timey Burma-Shave signs;

In regions beyond now,

And having a ball.”

The doors opened to reveal the first unsmiling cast member I had ever seen, who directed us to move within in a suitably ghoulish manner.

We were led into a high-ceilinged chamber, where an unseen narrator took over… a Ghost Host. “Welcome Foolish Mortals…. It’s too late to turn back now!” My son gripped my hand a little tighter. 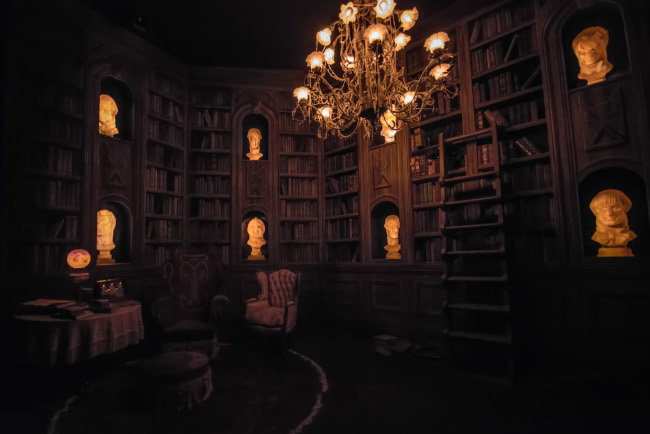 My daughter let go altogether and moved quickly to the greater protection of Mommy. “Oh well,” I thought “it can’t be so scary that we can’t fix it with a frozen chocolate banana afterwards.” And then the thunder clapped and the flash of light revealed the hanging form of the Ghost Host high above.

I could not say just exactly how high my son jumped, because I was also somewhere in mid-air for slightly longer than gravity would normally allow. The walls opened to reveal a conveyor belt of grim, grey chariots, ready to whisk us onward, into the depths of the mansion. … “It’s too late to turn back now…”

“Funny and scary” is one of those things that just shouldn’t work, like “sweet and sour” but if you get it exactly right, you create something that is truly enchanting. In this case, something that was so sensationally spooktacular that it made an overplanning Disney Dad stop fussing and enjoy the ride.

Our Doombuggy rolled on, along the staircase, twisting and turning to direct our gaze to every new thrill. Down a hallway filled with portraits that transformed in the light, through a library filled with marble busts whose changing expressions were not to be believed.

Into the music room, where a solitary shadow was the only evidence of an unseen piano player. And beyond, into a crazy kaleidoscope of a room, a twisted tesseract of stairs shifting up and down, backwards and forwards, through dimensions unimaginable. What was this impossible place? 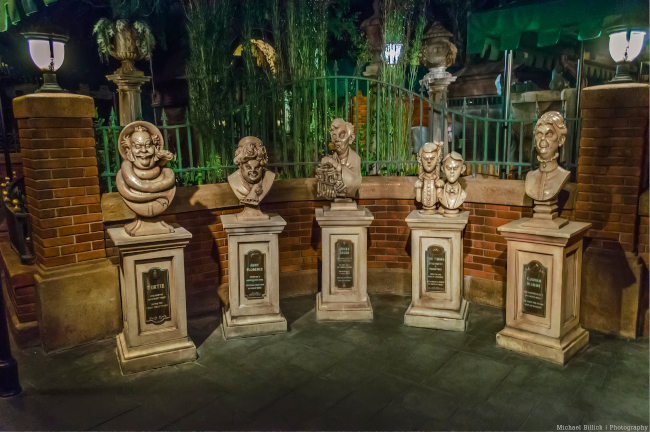 Blinking, cartoonish eyeballs surrounded us, and whispering voices chattered, as red-eyed birds pecked at long-dead funeral bouquets, and the skeletal form of the dearly departed pushed open the lid of his coffin.

We rolled down a hallway of closed doors as an unseen hand turned and twisted the doorknobs, as if it might burst forth at any moment. It was all done in such loving earnest. I was enchanted. Ensorcelled.

And the Haunted Mansion was just getting started! As the clock struck 13, a voice called out “Let there be music from regions beyond”, and we arrived in the presence of the crystal globe that contained the spirit of Madame Leota, and learned the Happy Haunts had received our sympathetic vibrations… and the ride rolled on in full magnificence.

The astonishing audacity of the grand ballroom, filled with countess spirits; dancing, feasting, feuding and galivanting in a most phantasmagorical fashion.

On we rode, though the ghastly attic of the bride, awaiting her next “death do us part”, and into a massive graveyard which was home to an entire spectral orchestra, all playing and singing a grim, grinning anthem that would stay with us forever.

It wasn’t until the visit of the Hitchhiking Ghosts that it even occurred to me to wonder if the others had enjoyed themselves, and of course they had. Our lunch at Pecos Bill’s was filled with an excited and extremely thorough recitation of everything we had loved about the Haunted Mansion, and I realize now I had done most of the talking.

There is a lot to do in a day at the Magic Kingdom, and repeat rides don’t often make the cut, but at the insistence of my children, we found ourselves back at the Mansion, this time discovering the brilliant distractions of the stand-by line– snapping, shifting books, spectral music, deadly bubble baths and more.

It was magical, and they were already talking about having another go again afterwards. 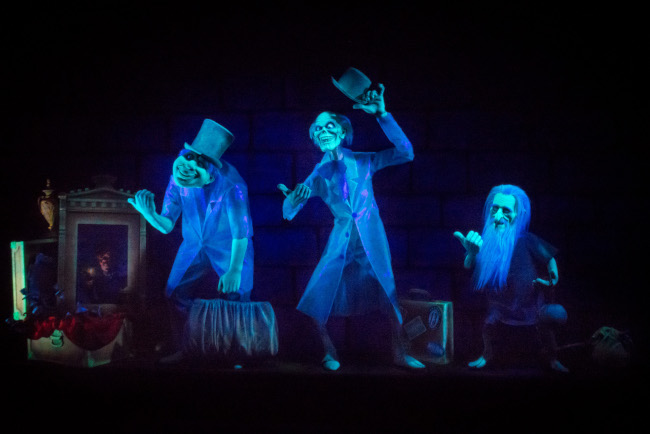 As we approached the grand entrance of the Mansion, I turned to my wife, quite pleased.

“Boy, they’re really taken to this one,” I said.

She gave me a look as if I were a small, dull child of whom she was extremely fond. “They do love the Haunted Mansion,” she said “but that isn’t why we’re back here. They can tell their father just discovered his favorite ride.”

And that is why the second time I rode the Haunted Mansion, I did so with misty eyes and a lump in my throat. Because my babies were babying me and using all 999 Happy Haunts to do it.

Folks, before we go, I wanted to remind you that WDW Magazine has created a very special all-Haunted Mansion issue called “Attraction Special: Haunted Mansion” and as we record this episode there are still copies available for purchase in our shop.

If you love the Haunted Mansion as much as I do, you won’t want to miss this!

All the history and mystery of the most ghoulish attraction in the Most Magical Place on Earth and beyond. Visit shop.wdwpublishing.com and give yourself a Halloween treat you’ll enjoy again and again!