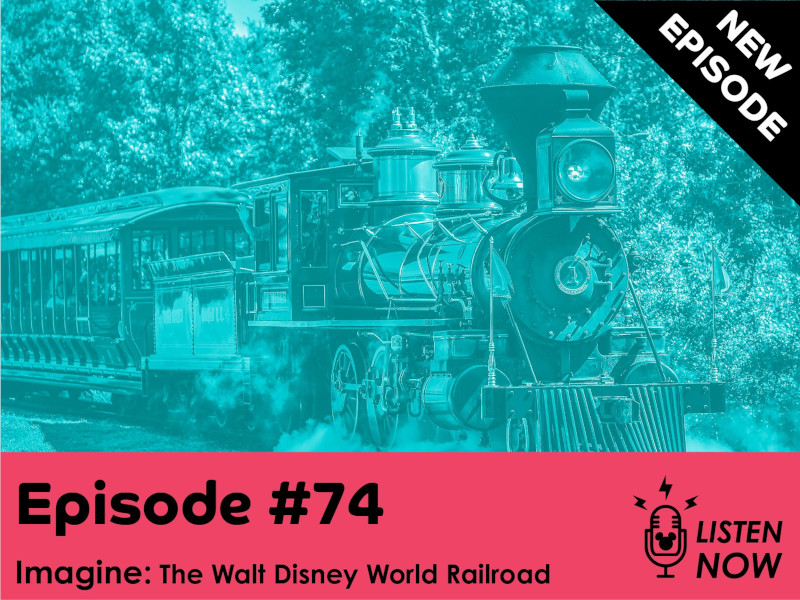 This week on WDW ESCAPE, take a journey of the imagination with us, as we IMAGINE The Walt Disney World Railroad!

For more info on WDW Escape, click here– or listen to all our episodes. Listen to today’s Imagine: The Walt Disney World Railroad episode while following along with the transcript and photos below!

Welcome to WDW Escape, brought to you by WDW Magazine. The October Issue of WDW Magazine is a special one–  celebrating the Magic Kingdom and the 50 years of wonder and joy that it has brought to the world.

Here at WDW Escape, we are playing along and featuring some of the attractions that came into being on that fateful day, way back in October of 1971, including the Most Magical Train on Earth– the Walt Disney World Railroad….

When I was a little boy, my daddy had a model railroad set. I was officially discouraged from touching it, and as far as I could ever see, it didn’t do much but drive around in a circle, but there was a brief span of time there when a lot of the gifting guesswork was taken out of Christmases and birthdays and Father’s Days.

A new boxcar, or a couple of scale trees, or tiny people to stand waving to the train as it passed, or some small automobiles to be perpetually parked at the train crossing, waiting for the endlessly circular route to be travelled; these were all excellent gifts. So, of course, the railroad set got bigger. But the available space to put it in did not.

Quite the opposite, in fact– And so, the model railroad was attached to a folding table, that could be packed away easily into what little space was left over from four kids and two dogs and the bric-a-brac of family life.

I always thought this was very clever, though by the time he was done taking it all out and putting it all away again, there wasn’t time for much more than a few loops around the circuit, and the railroad came out less and less, until one day it just stopped altogether. In time, I would come to understand, as I’m sure many of you do as well, that Dads still like toys, but they don’t really have enough space for them.

Well, except for one Dad who did. Would it surprise you to learn that his name was Walt Disney? 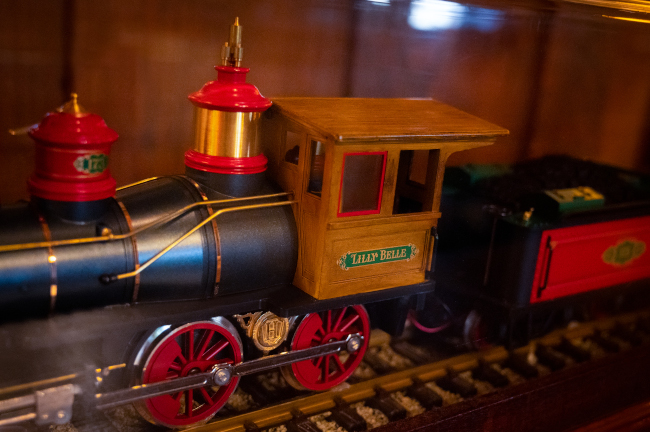 Like my Dad, Walt was a scale train enthusiast.

Unlike my Dad, Walt had 5 acres in the California sunshine to let his model trains have room to roam, and they never had to be folded away and squirreled into the basement.

And instead of waiting for Fathers Day to prompt a visit to the hobby store, Walt had the machine shop at Walt Disney Studios to fabricate him whatever he needed. And so, the Carolwood Pacific Railroad was founded.

On Walt’s instruction, a scale replica steam engine was crafted, and named The Lilly Belle, after his wife Lillian Disney, which is the sort of thing that good husbands do when they have just built a rideable model train set where their lovely wife had intended to put a flower garden. 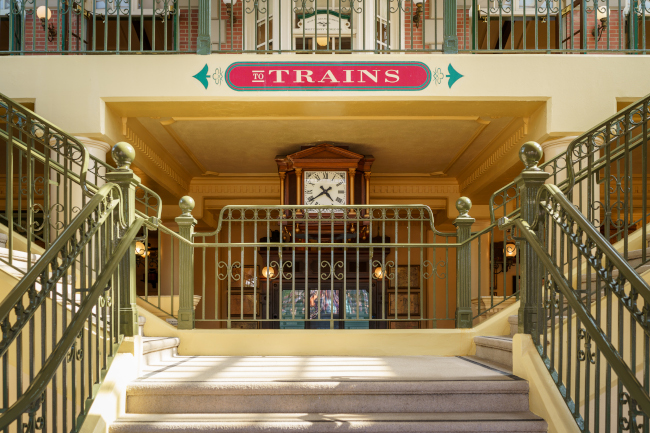 Yes, the Carolwood Pacific Railroad was rideable, if you didn’t mind looking a bit like a grown man riding around on a tricycle. To judge by the newsreel footage, Walt didn’t mind a bit, and neither did his guests, all of whom seemed to be having a lovely time.

Too lovely, perhaps, as an accident involving a guest in 1953 led to Walt’ decision to close the Carolwood Pacific. Even Walt Disney ran out of room for his toys eventually. Except, no. He did not.

The railroad rolled into life on the opening day of Disneyland, July 17, 1955, with Walt himself at the controls. And these were no miniature, tricycle-sized trains. They were still scale models, to a degree, and created once again by the Studio’s machine shop, but the scale was now one that suited a Dad who not only had space for his toy trains, but had room for trains that were actual… well… trains!

Soon enough a ride on the Santa Fe and Disneyland Railroad would cost you a top-level ticket, and, with more than 6.5 million riders a year, it was one of the most popular steam-powered trains in the world.

Of course, much like my own Dad and the folding table, there was still never enough room for all of Walt’s toys at Disneyland, and so he embarked on the mysterious Florida Project, which you and I and millions of other lucky people know as the Most Magical Place on Earth. There was never any doubt that yet another railroad would be a part of the new park, even if Walt would never get to drive it. 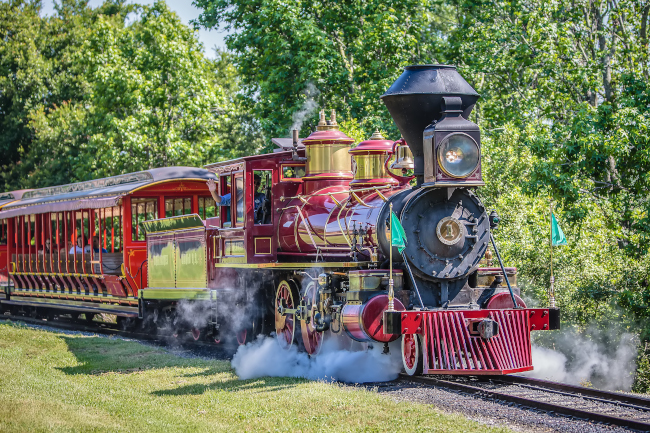 This time it was decided that buying and restoring existing narrow-gage locomotives would be better than making them from scratch, and five engines were purchased from Ferrocarriles de Yucatan in Mexico (please pardon my terrible Spanish), and shipped by rail to Florida where they were restored and had custom passenger cars constructed.

Only four were able to be restored, but the trains, the Walter E. Disney, the Lilly Belle, the Roger Broggie and the Roy O. Disney were soon ready to meet their adoring public, carrying as many as 375 passengers at a time on a gently nostalgic journey from Main Street USA Station to… Main Street USA Station.

With only one completed station, only round-trips were available until the following May when the first Frontierland Station opened, and the Walt Disney World Railroad officially became a real train that you could actually use to go somewhere.

That is, until Frontierland Station was torn down while they were building Splash Mountain in 1990. For a brief time, the WDWRR was renamed the Backtrack Express as it could only travel forward and back between Main Street USA Station and the construction site. Never quite enough room for all of the toys. 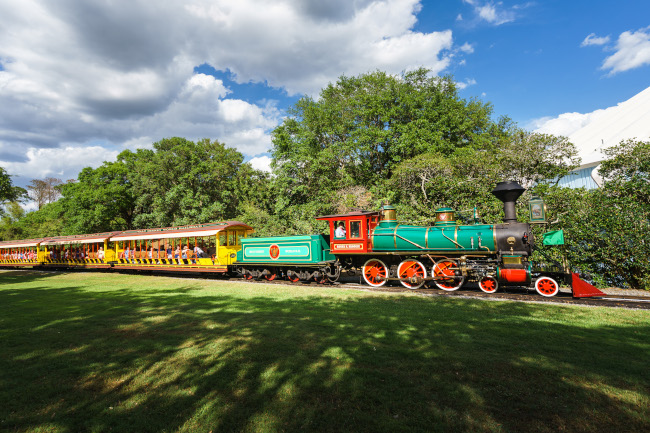 Well, mostly. Those beautiful steam trains have been quiet for a while, a necessary delay in departures caused by the construction of the much-anticipated Tron Lightcycle Run attraction. Bigger, faster and shinier, but still train, in a way. Even Walt Disney has a hard time finding room for all of his toys at once, it would seem.

Soon enough, the Railroad will ride again. At time of writing there is no official word of exactly when, but fans seem hopeful that it will be soon. Millions of happy passengers will spend a nostalgic twenty minutes riding a loop through a simpler time.

My Dad never got to ride Walt’s railroad, but I think of him each time that I do. I imagine his delight as we pull out of Main Street USA Station, passing over bridges and through tunnels into Adventureland, and pull into Frontierland Station.

On the move again we pass Big Thunder Mountain, and wave like the tiny people in his train set at the folks riding another one of Walt’s toy trains.

Over the bridge, and off to Fantasyland Station, and then away on the final leg of the round trip, past Tomorrowland, waving to the future from the past. In my imagination his face is beaming at every moment, and upon returning to Main Street USA Station, I can picture him quietly wanting to go around again.

But his grandchildren (who he never did get a chance to meet), would be pulling him in different directions, and he would smile and go along. Putting his toys away. Because sometimes that’s just what good Dads do.