Disney x Gucci: Get Ready for the Chicest Disney Collab 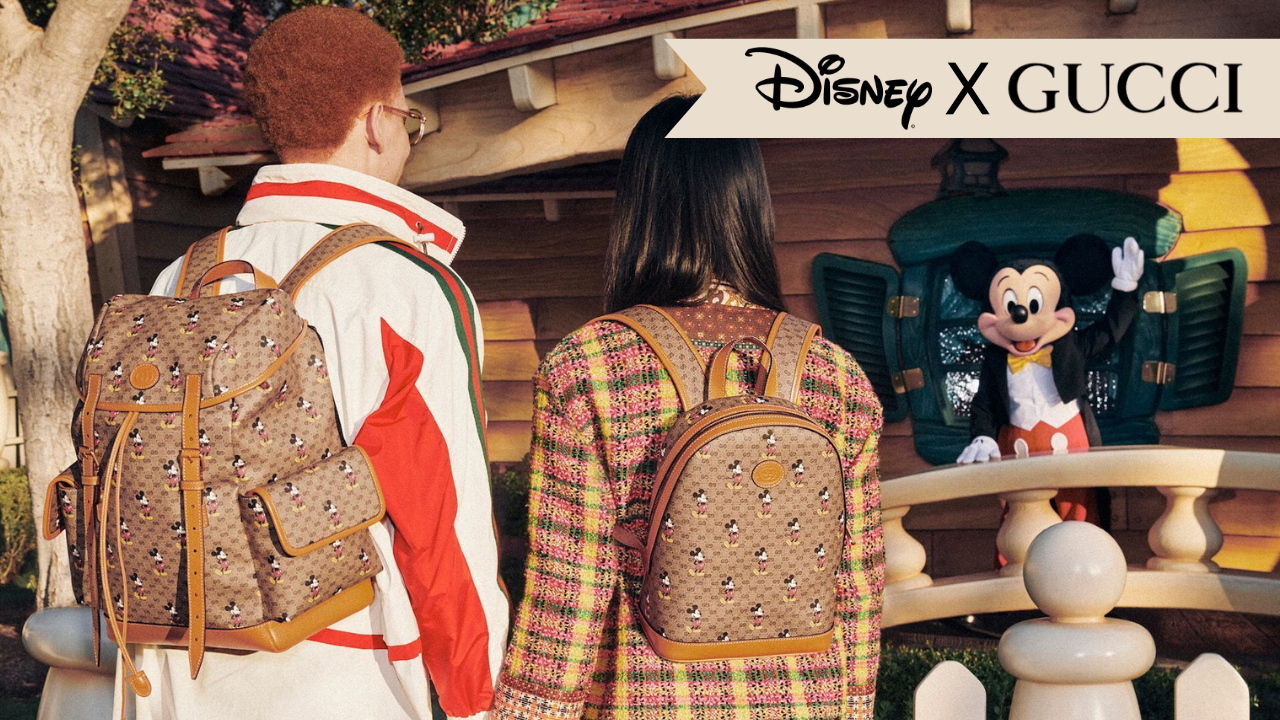 Grab your Gucci gang and tell them you’re going to Disney!

On January 3rd I woke up to the most adorable video on Twitter. It was a montage of a group of well-dressed young adults adventuring through Disneyland with Mickey Mouse. I thought it was a travel ad for Disneyland; little did I know it was a full production from Gucci to introduce their new Disney collaboration!

To celebrate the Lunar New Year, and to commemorate the year of the mouse/rat, Gucci released a Mickey Mouse collection—and it’s as cute as you can imagine! 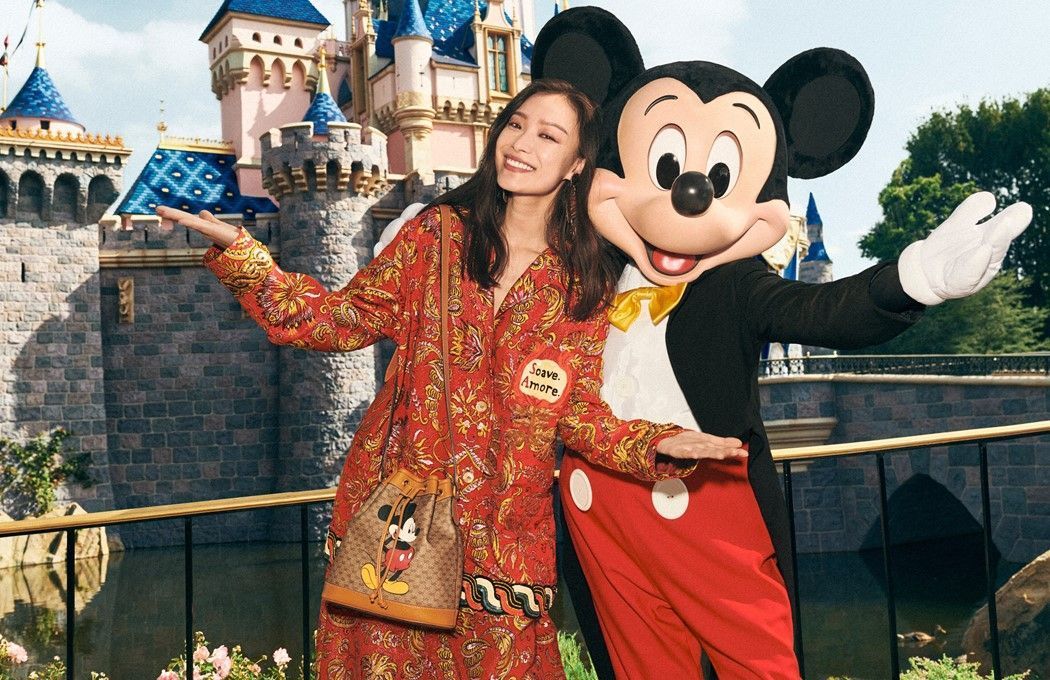 Let’s talk about this trailer first.

The video opens by introducing us to the models, who are sporting their Gucci outfits upon arrival at Disneyland! They all meet Mickey Mouse at the castle, and their Disney day begins!

They hit all of the fan-favorite attractions: the spinning teacups, Thunder Mountain, it’s a small world… and yes—Splash Mountain. They were dressed head-to-toe in Gucci and rode a water ride… without a poncho. There’s only one word for that: bravery. 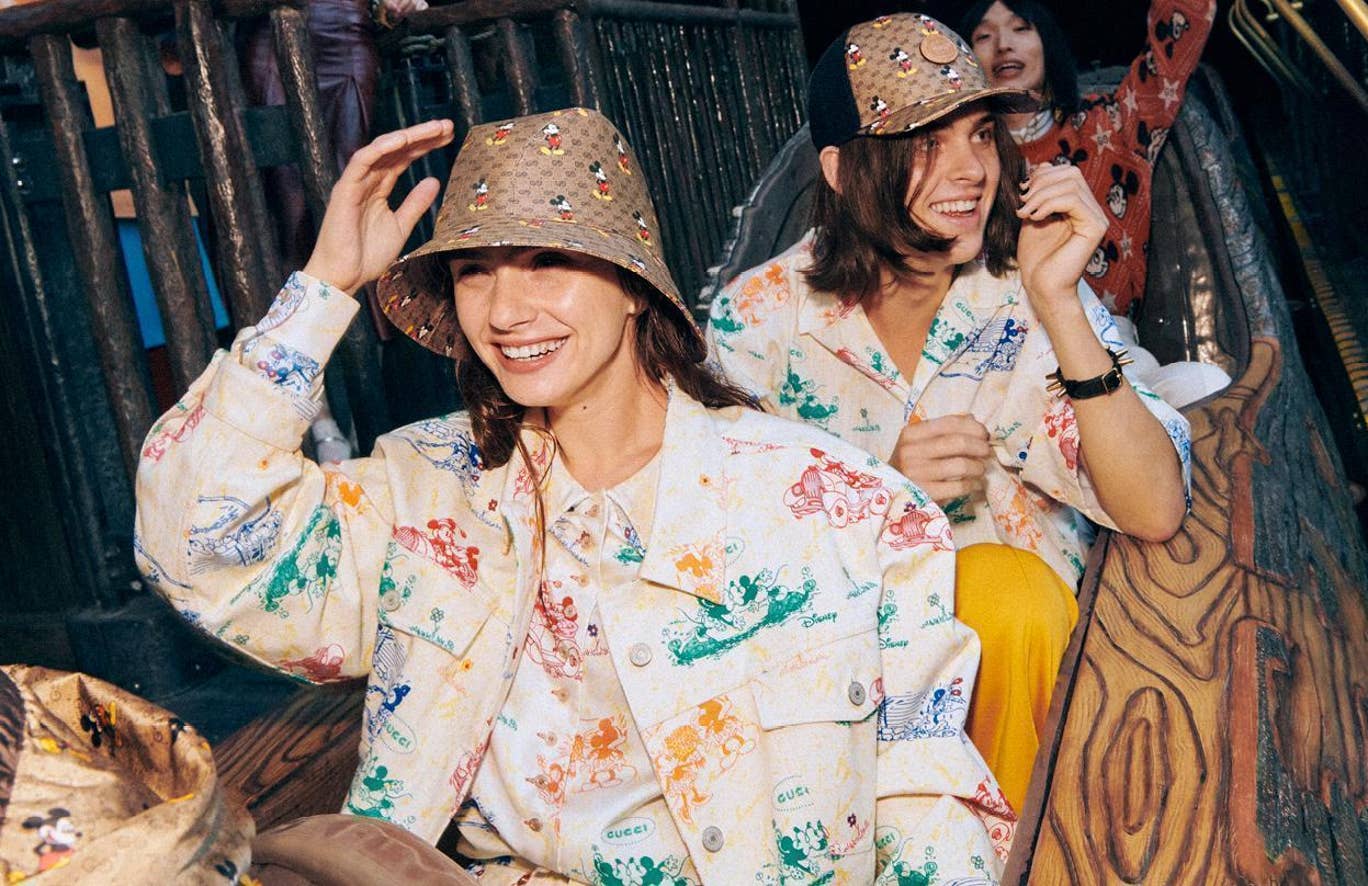 In between the shots of Mickey’s Gucci gang on the rides, they are seen eating cotton candy, taking pictures, and meeting new people—it sounds like the perfect day at Disney, doesn’t it?

The video ends with Mickey taking a bow in Toontown, and we are left with the hashtag #DisneyXGucci 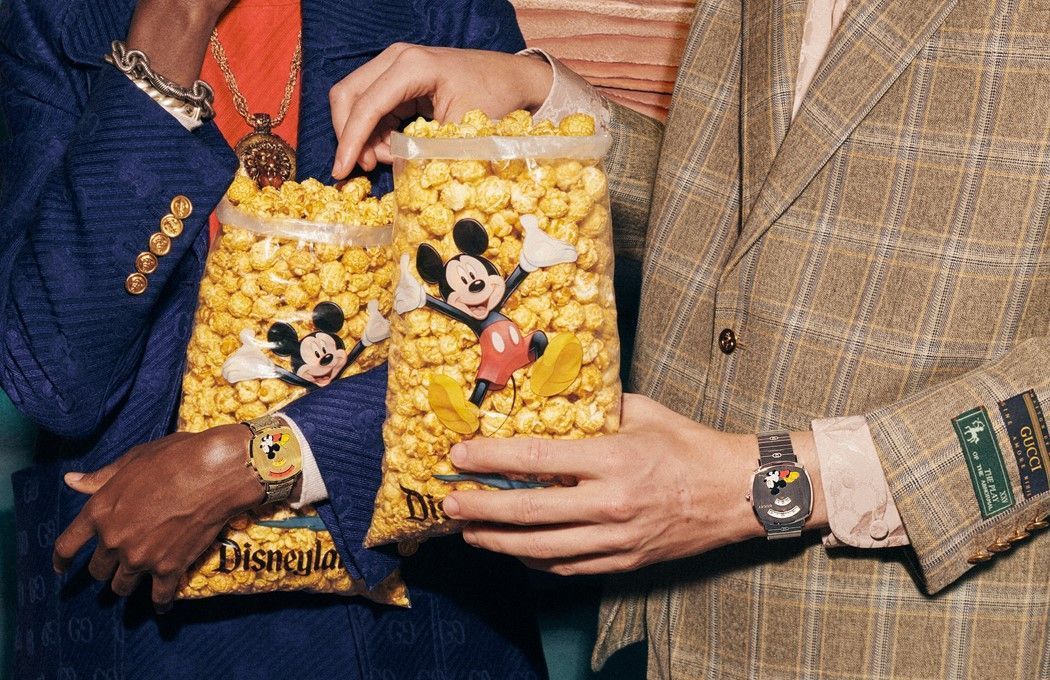 Can we get a napkin over here? Photo Courtesy of Gucci

While watching this video, I didn’t think of these people as professional models. They seemed like a vibrant group of people who just wanted to have fun at Disneyland together.

They might have been better dressed than me and my friends… but the montage seemed like a typical day with my best friends at Disney, which is why I think this advertising resonated with me so much.

When I think of Gucci, I don’t associate the brand with “fun” or even with Disney. Don’t get me wrong, a lot of Gucci’s collections are playful and bright, but because they produce high-end products, it wasn’t something I pictured myself wearing at Disney… until now! Because of this collection, I am anticipating seeing a lot more Gucci streetwear in the parks, and I am here for it. 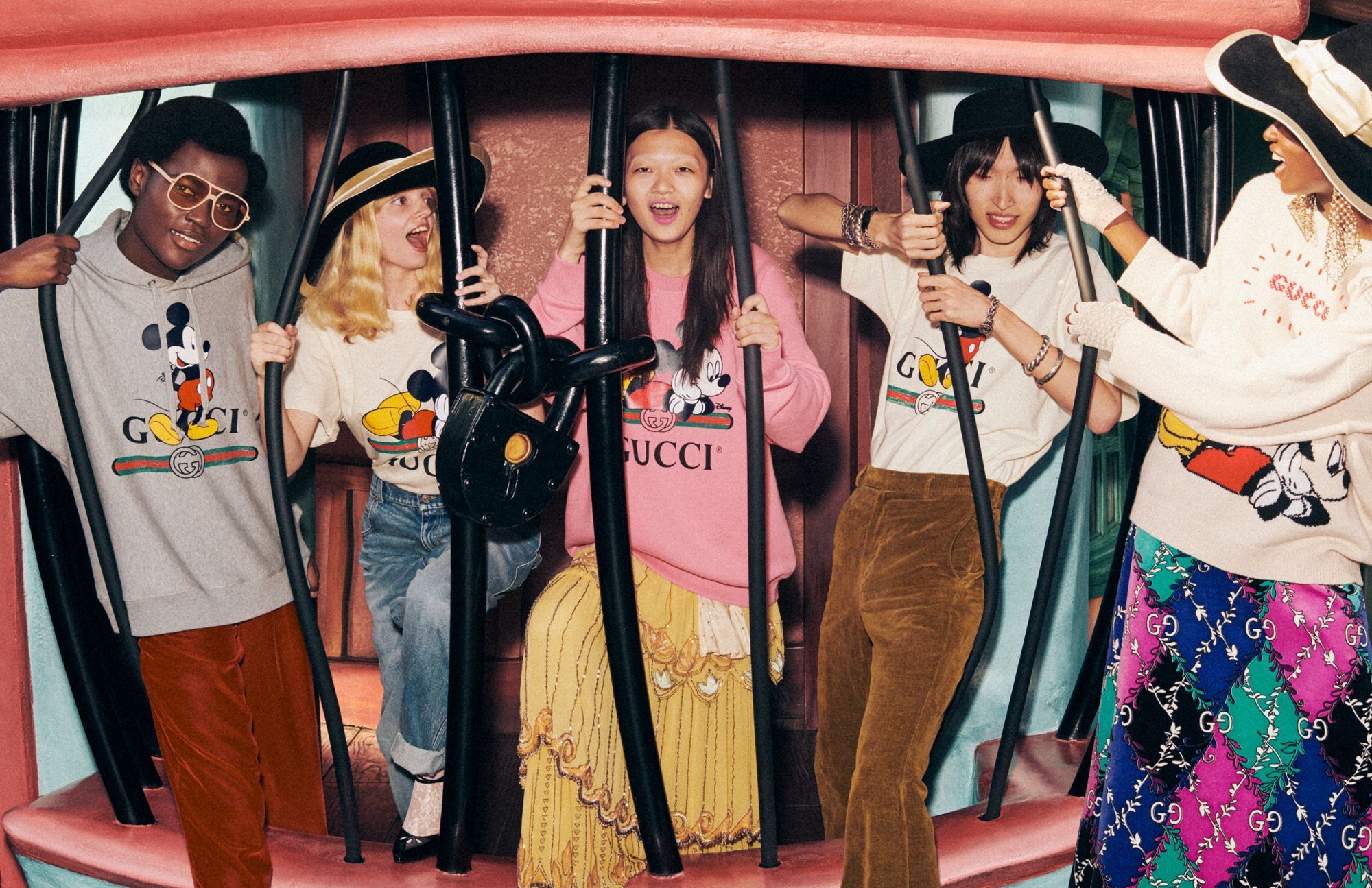 Did you listen to the video with the sound on? If you did, then you probably recognized the instrumental version of “Who’s Afraid of The Big Bad Wolf”. This song accompanies the fun adventure of Mickey and his Gucci gang throughout the entire video.

Gucci dropped a ton of products, and they all seem practical to wear in the parks! Some of the items include spacious backpacks, comfy sneakers, watches, and graphic t-shirts—everything a seasoned parkgoer knows they need for a day at Disney. 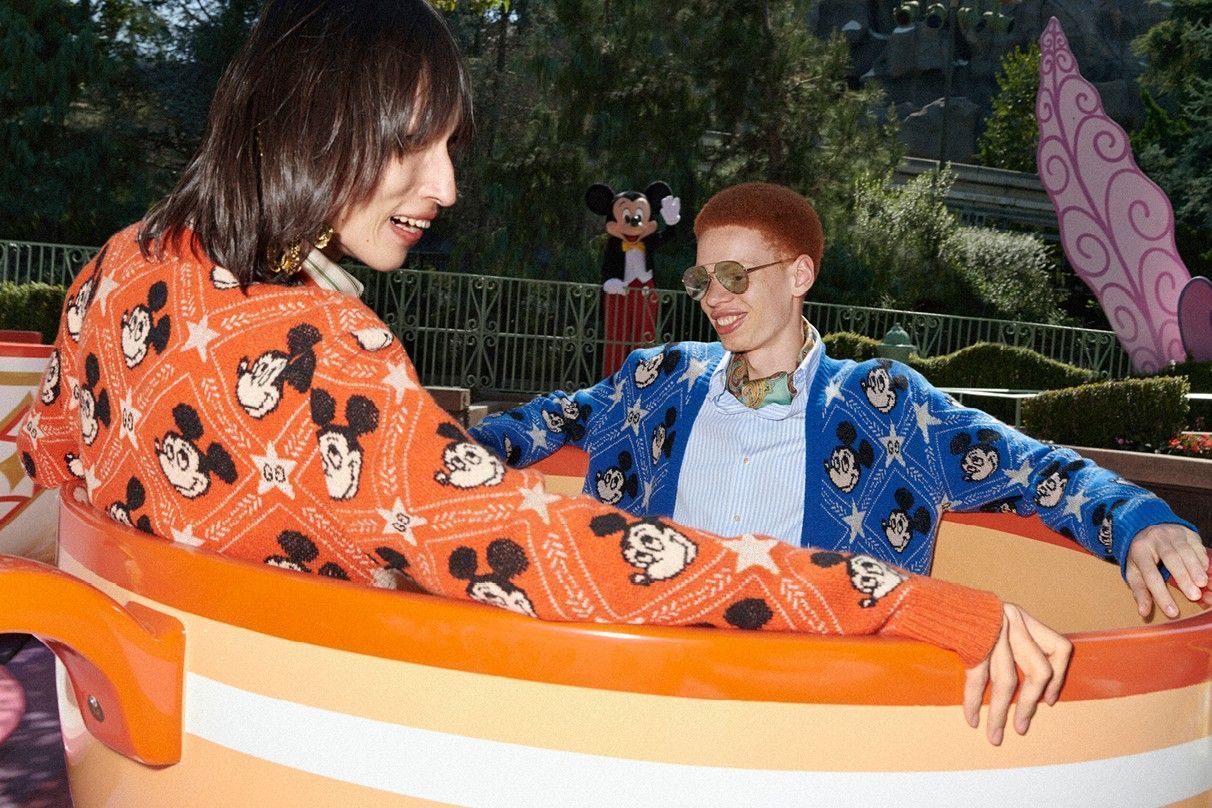 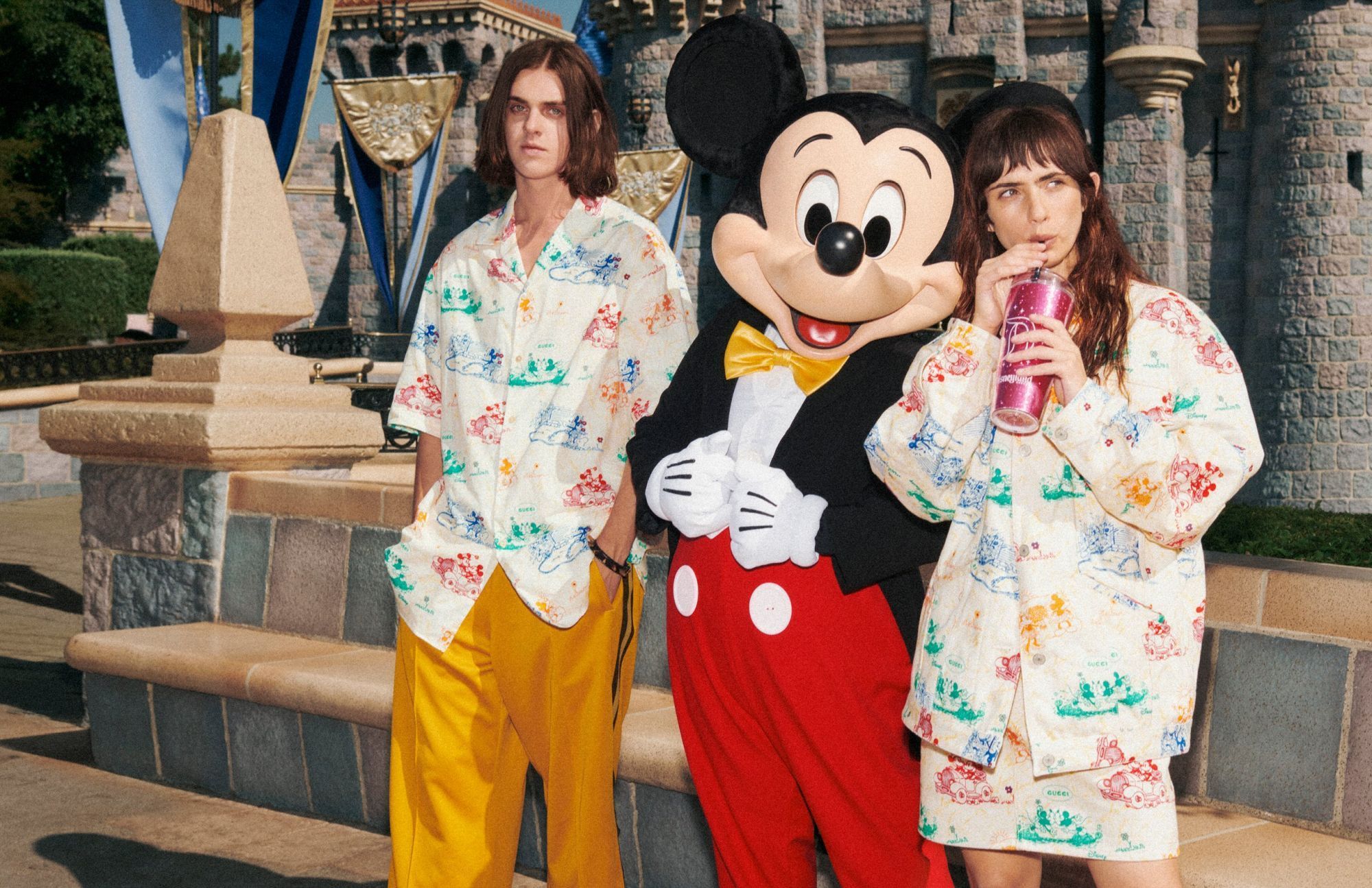 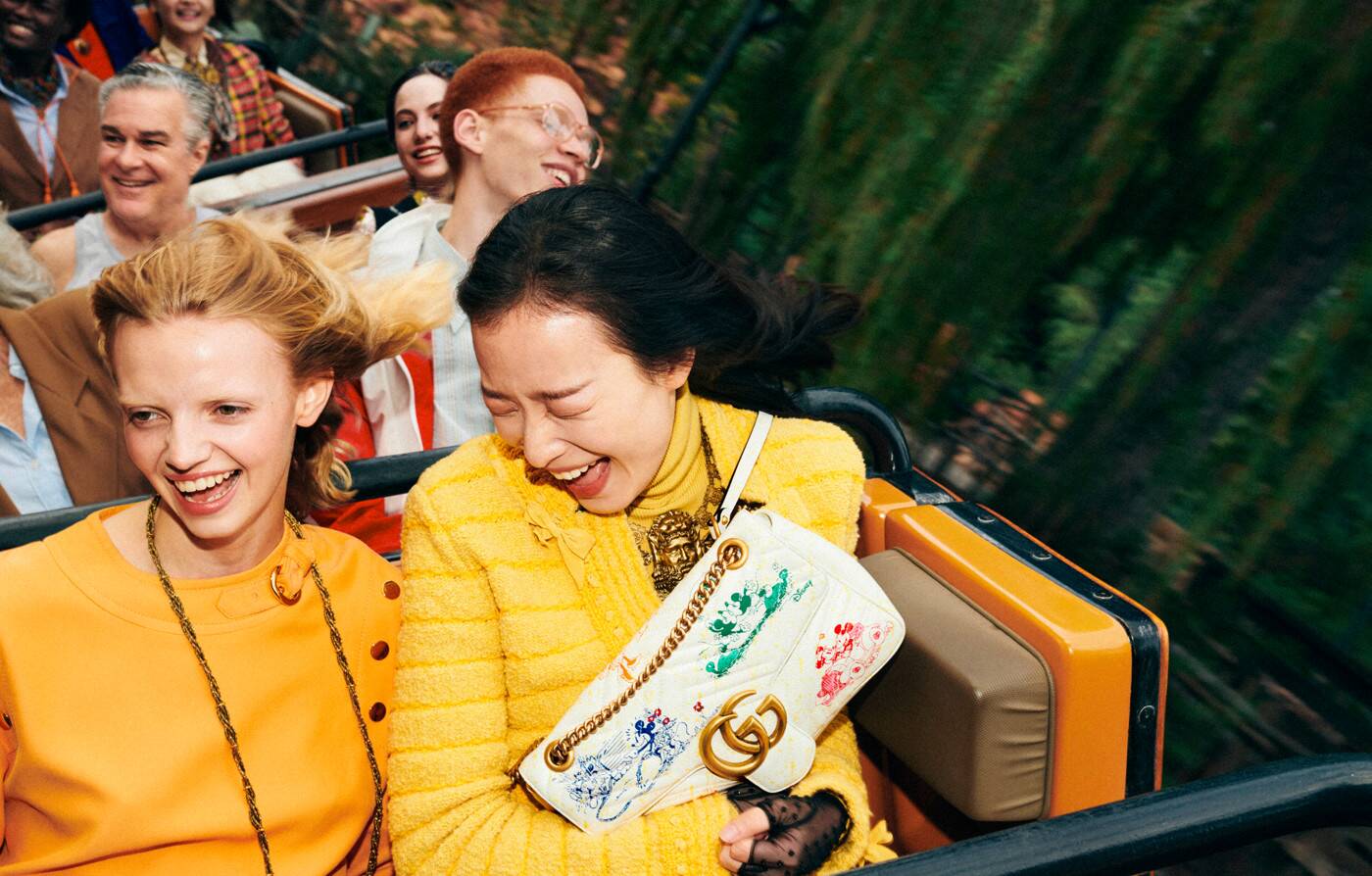 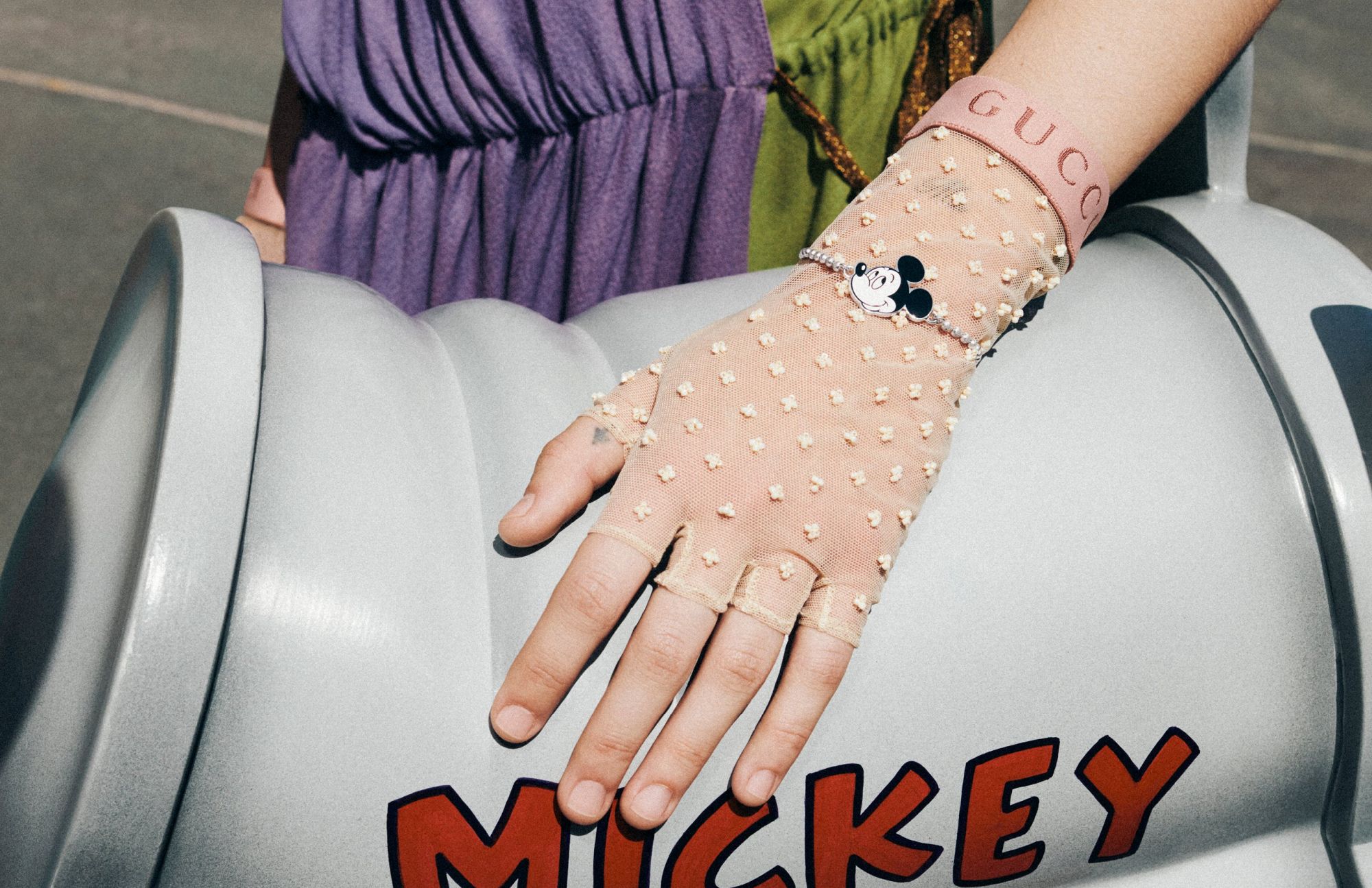 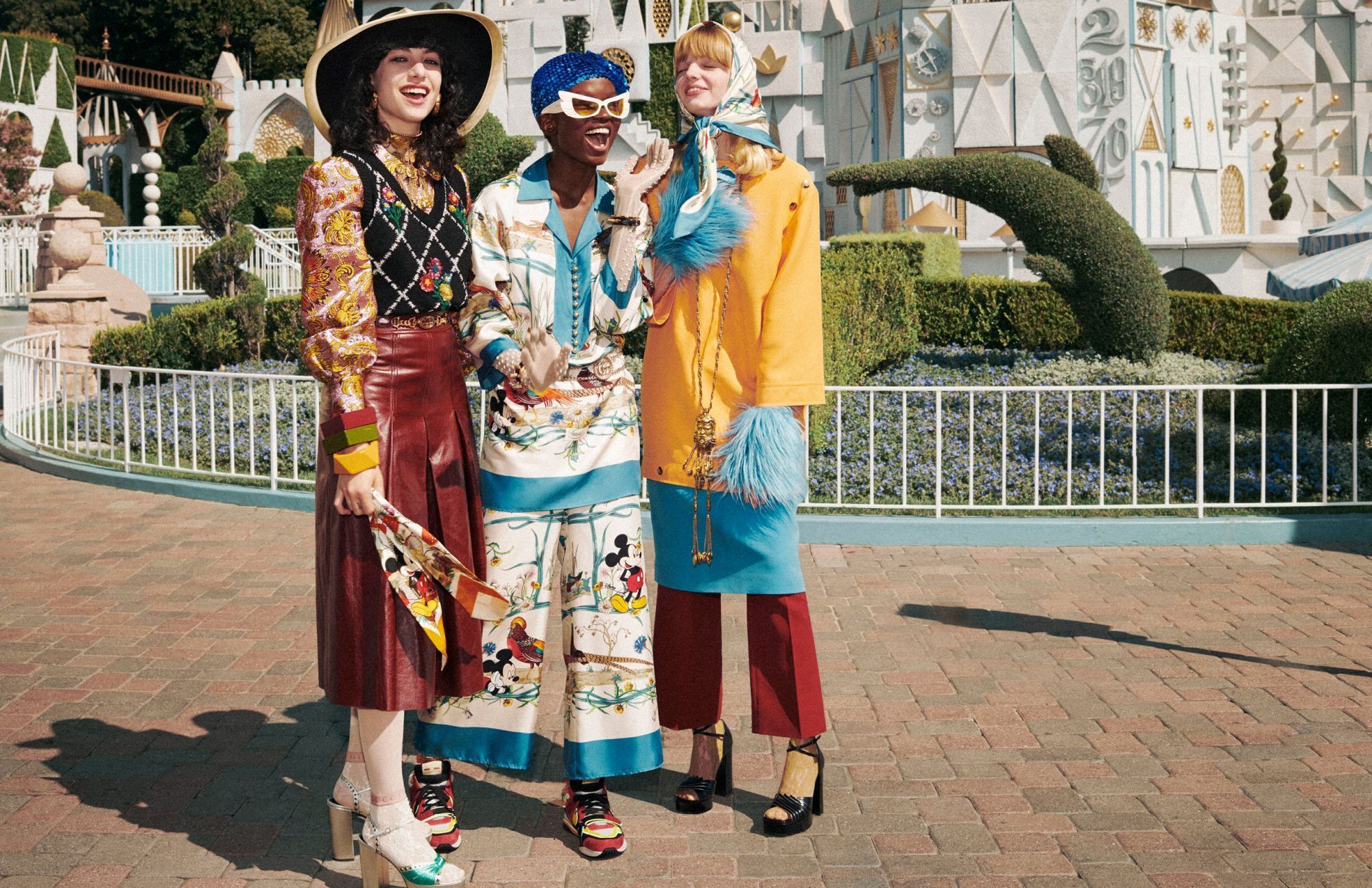 My favorite pieces from the collection are the silk scarf with Mickey on it, as well as this crossbody bag with the classic “gg” print on it. 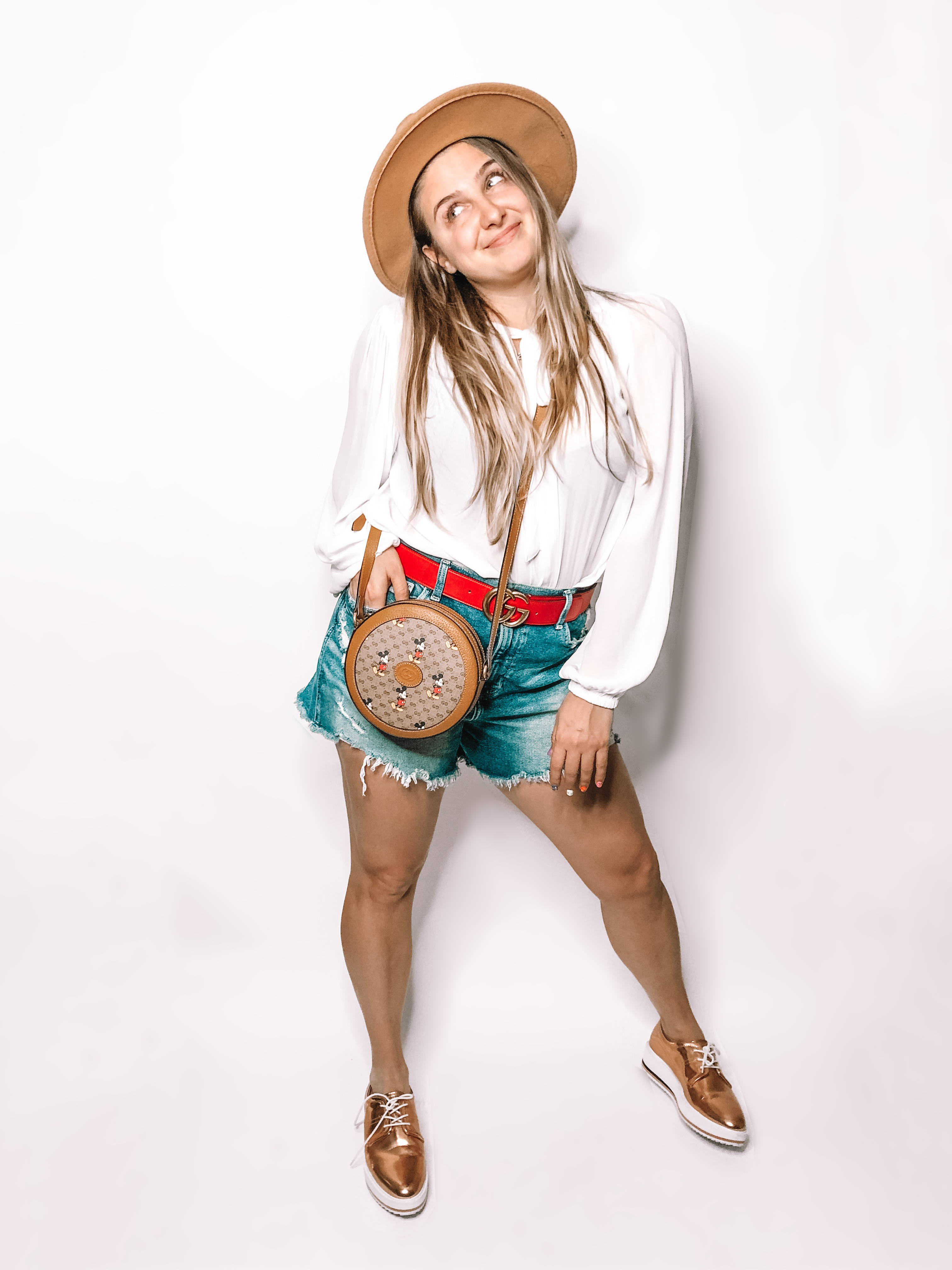 I was able to get this crossbody before they sold out! This is something I can totally see myself wearing to WDW! Photo by Rebecca Sferlazza 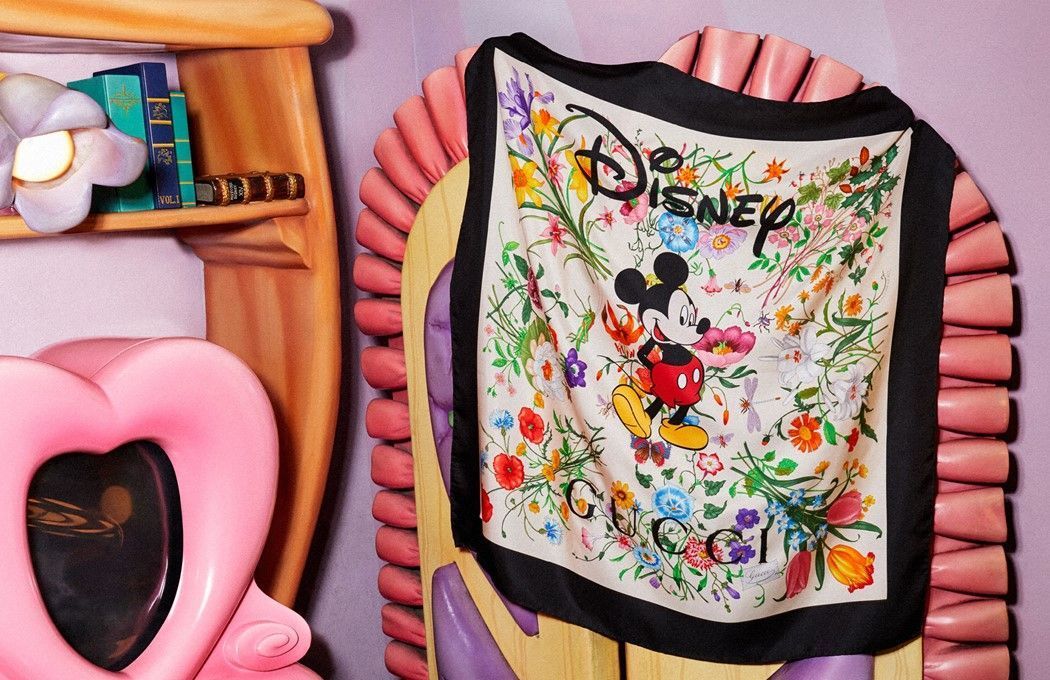 My second favorite piece from the collection! Photo Courtesy of Gucci

The pieces from this collection are adorable, but the photos that Gucci released in their look book are a Disney Instagrammers dream. They are equally as chic as they are exciting, and I think that was the tone they wanted their Disney collection to convey.

If Disney is known for anything, it’s that they pay attention to every detail. Gucci has followed form and applied this attention to detail in the packaging that customers will receive their Disney x Gucci products in! Just look how cute the boxes are! 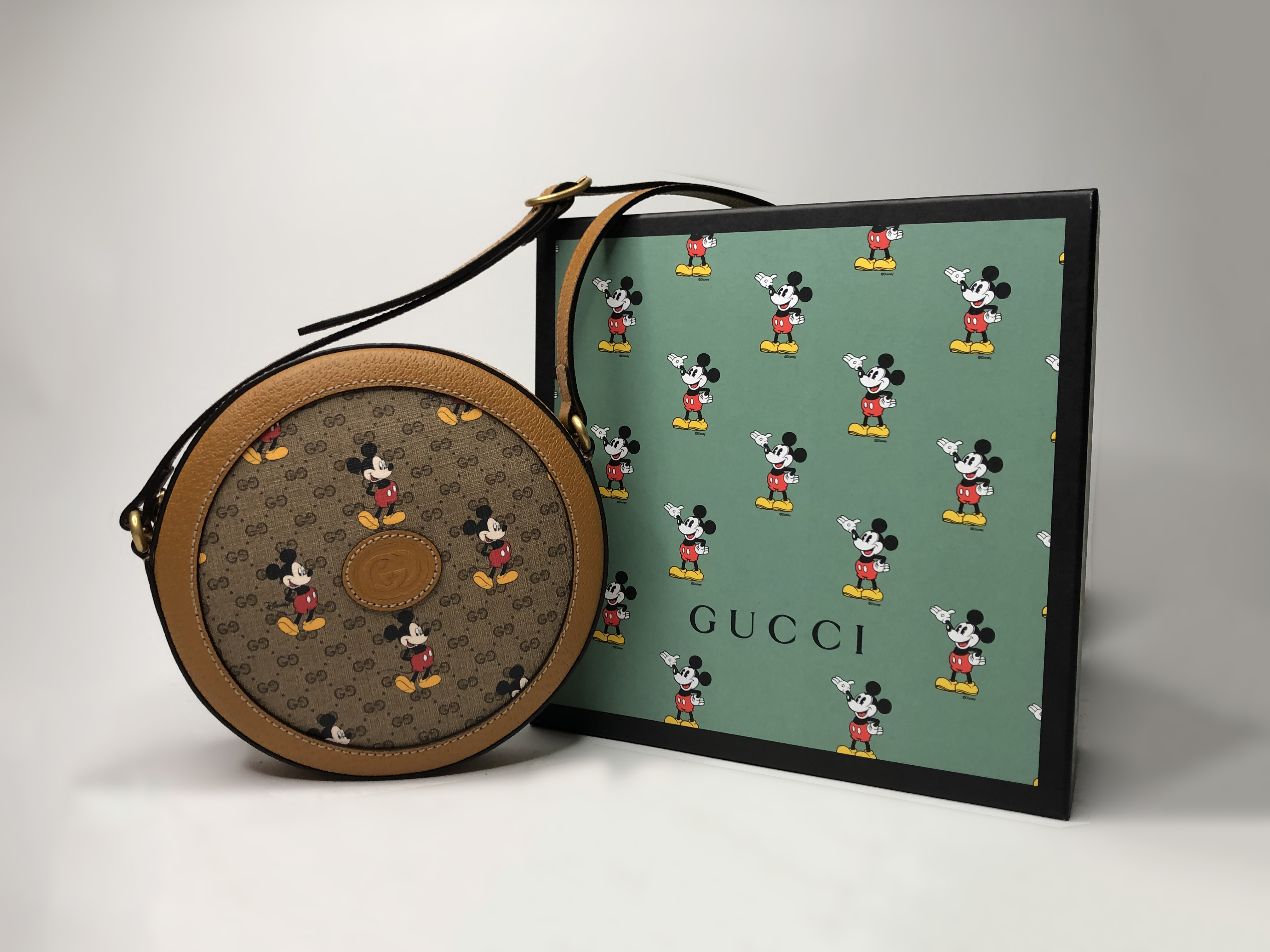 Bottom line: Gucci has just declared Disney as FASHION… which means this should be the end of the “Disneyland is for kids” movement.

The collection is available online and in select retail locations. This is a limited-edition release, which means they won’t be restocking the products. Get yours now before it is all gone!

Do you love all things #DisneyStyle ? Subscribe to WDW Magazine for your monthly dose of Disney!