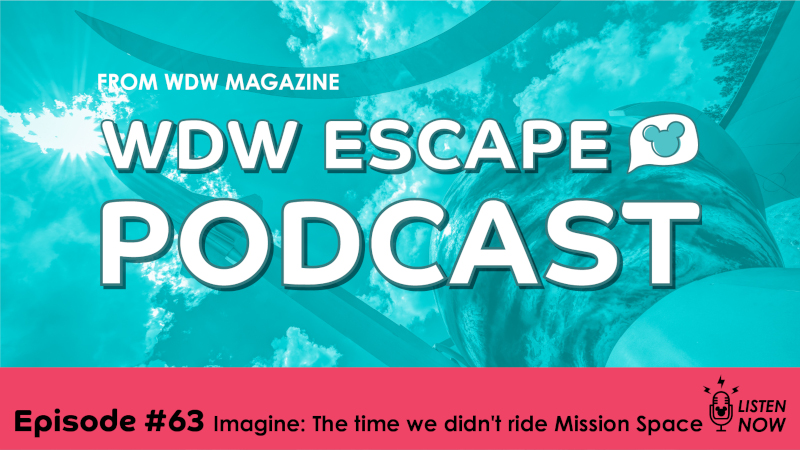 This week on WDW ESCAPE, take a journey of the imagination with us, as we IMAGINE The Time We Didn’t Ride Mission: SPACE!

For more info on WDW Escape, click here– or listen to all our episodes. Listen to today’s Imagine: The Time We Didn’t Ride Mission: SPACE episode while following along with the transcript and photos below! 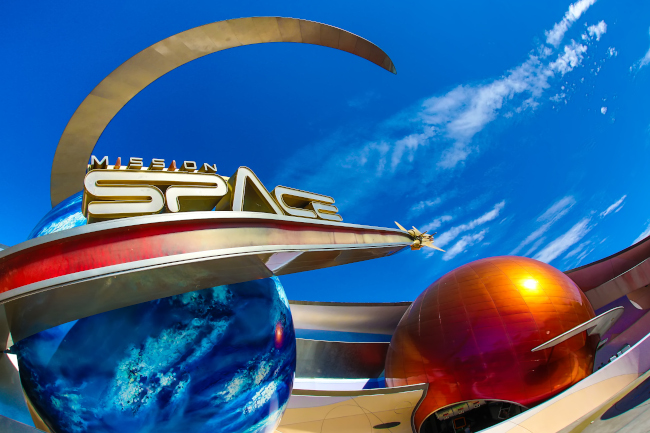 The July issue of WDW Magazine is the “Extreme” issue, and as you can imagine, it doesn’t mess around. It’s packed with the biggest, the fastest and the most outrageous adventures that can be found at the Most Magical Place on Earth.

The truth of the matter is, you can’t look at Walt Disney World through extreme-colored glasses without considering what might very well be the most extreme ride on property: EPCOT’s Mission: SPACE, where courageous volunteer astronauts have been risking their lives… well, probably not, but definitely risking their lunches, since 2003.

Mission: SPACE not only graces the cover of this month’s edition of WDW Magazine, but it is the subject of a wonderful article by Jamie Cattanach on the history and behind-the-scenes secrets of this interplanetary wonder, and there Is no sense in duplicating that here, especially since that is not the story that I came to tell.

No, friends, I am here today to tell you the hair-raising story of one of the most extreme events in my family’s history with Walt Disney World. The true and terrifying tale of the time we almost rode Mission: SPACE!

There are a few things that you might have caught on to, if you are a regular listener to the last sixty-two or so of these ribald little tales of adventure. Number one being that I am a sucker for my family, and will do just about anything to make sure they don’t miss out on any of the magic to be found in our very favorite place.

This is something that I have in common with just about every Disney Dad and Mickey Mom I have ever met, and you may very well be in that number. There is nothing we want more than to know at the end of a day at Disney, that our loved ones didn’t miss a thing.

Usually that works in our favor. This was not one of those times. 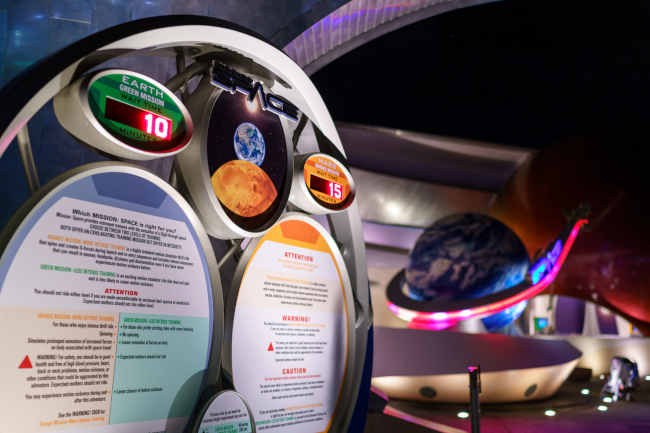 The Second Thing you may have learned is that when it comes to Walt Disney World, I am a notorious over planner, and have been ever since our very first Disney World adventure.

Especially that first trip, actually, when I didn’t quite know what to expect in terms of my kids’ appetite for rides, and I set a pretty mild course.

From the very first day in the Parks they had opened my eyes to the fact that they were up for more than I expected. By the time we reached our first visit to EPCOT, I had come to expect them to be game for just about anything except a long stand-by line, or a height requirement too high for my daughter, who was not yet five.

And I guess that was why I led us in to Mission: SPACE, or at least that’s my story, and I’m sticking to it.

The truth of the matter is that I think I dropped the ball on my over planning, and had somehow melded Mission: SPACE and Test Track into one vague, poorly researched idea of a ride that I never expected my kids to go for.

But it was January and the crowds were very low, and my kids had started breaking at top speed for any attraction with a short stand-by time.

“This one is only ten minutes!” my son cried excitedly.

“Daddy! I’m tall enough!” my daughter said, jumping up and down.

My wife shot me a glance, and if I had been a little more aware, I might have registered a note of concern in her eyes, but I smiled and shrugged and she did the same and off we all went like the poor, foolish mortals that we were. 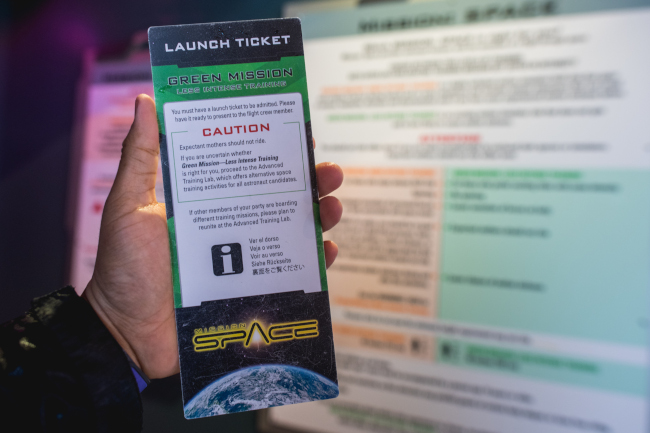 The first sign of trouble happened immediately, when we were asked to choose between the Orange Track and the Green Track. These days, and since 2017, the two are totally different experiences, with the green track becoming a milder (but still extreme) orbital space mission.

But back then, the green track was just a version of the orange track’s flight to Mars in which the centrifuge within the ride pulled a little less that the two-point-five times the pull of gravity that the orange track pulled.

We knew none of this. If I had the smallest idea that the ride’s engine was based on equipment used to train actual astronauts, or even that the ride came equipped with an air-sickness bag, I would have turned the whole party around, marched them outside and bought everyone a frozen banana immediately as a consolation prize.

We could hear a familiar, comforting voice on the audio track telling us that guests who were prone to motion sickness were strongly urged to choose the green track.

I looked back to my wife, who not only does suffer from motion sickness, but sometimes continues to do so for days after an event, but at the moment where I meant to ask if she was up for this, she recognized the voice.

“It’s Gary Sinise,” she said, and she was right. Gary Sinise was a wonderful actor. Surely he wouldn’t steer us wrong. “Let’s take the Green Track” we agreed. 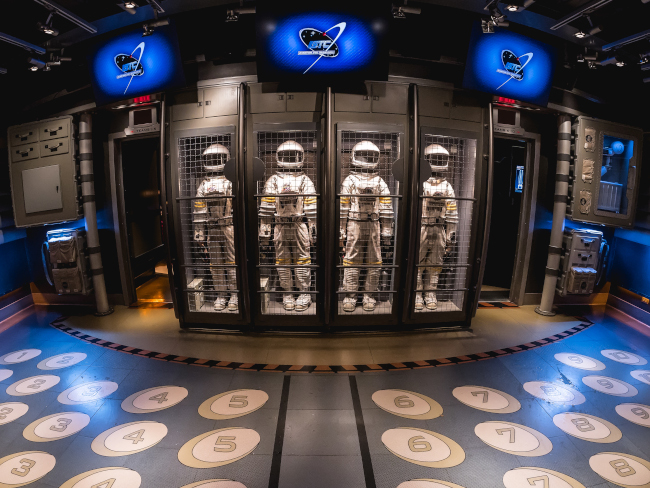 And off we went, without quite the same bounce in our steps. We are, as a group, rather less than extreme. Our visits to Walt Disney World have certainly helped us to push the envelope, from Seven Dwarfs Mine Train to Big Thunder Mountain all the way to Slinky Dog Dash.

And if that was where our taste for the extreme sort of topped out, that doesn’t matter at all at the Most Magical Place on Earth. There are experiences and adventures to be enjoyed for folks of every setting on the great thrill-o-meter of life.

The truth of the matter is that it was the baby of the family who grew up to have the taste for adventure, and there would be much parental persuasion to be exercised in the years to come to let her get her coaster on. But that is a story for another day.

On this particular day she was still four years old and had fallen quiet, still pleased to be tall enough to ride, but no longer jumping up and down, perhaps sensing the mood of the room. My wife was quietly calculating how long she was likely to feel ill, but keeping it quiet so as to not spoil it for the rest of us.

I was as desperate as any Disney Dad that my family should not miss out just because I was a big scaredy cat. And my son, who still inhabited that territory between reality and imagination that only a seven-year old can, was not finding anything that Gary Sinise was transmitting from mission control comforting in the least. 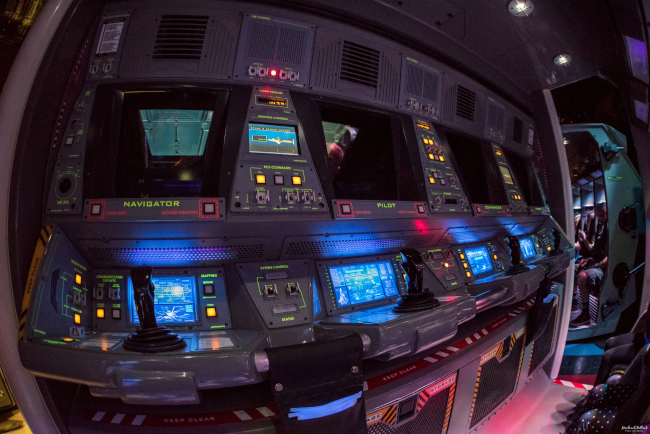 And that was our thrill-ride; a white-knuckled game of chicken, with each of us daring to take one for the team so everyone else could do something that they absolutely did not want to do. We got all the way in to the capsule, fumbling with the safety straps.

Gary Sinise broke the news to my son that it was up to him to know when to put everyone into cryo-sleep for the long voyage to the Red Planet. He looked to me, panic in his eyes. “How will I know when to do that?” he asked, not in fear of a scary ride, but with the deepest conviction that he was going to make a mistake and doom us all to float frozen for all eternity in the inky blackness of space.

At last, someone had the courage to say they were afraid, and the spell was broken. “Do you want to leave?” I asked. “Yes!” he said emphatically. “Let’s get out of here!” his sister announced happily. Before you could say “Apollo 13” we were out of the pod and being waved to safety by a cast member who had clearly seen it all before.

And I know it sounds like we didn’t do anything, but to this day that is one of the Disney Adventures we have told and retold again and again, laughing every time, and enjoying the thrill of what almost was, but then suddenly wasn’t and thank goodness.

And what was our first adventure upon our hasty escape from the cyclotronic embrace of Mission: SPACE? I’m pretty sure it was Frozen Chocolate Bananas. They were delicious to the Extreme.