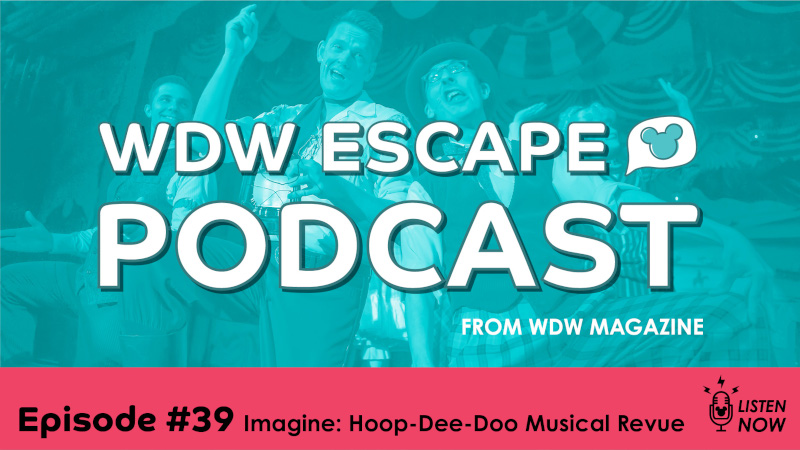 This week on WDW ESCAPE, take a journey of the imagination with us, as we IMAGINE the Hoop-Dee-Doo Musical Revue!

For more info on WDW Escape, click here—or listen to all our episodes. Listen to today’s Hoop-Dee-Doo Musical Revue episode while following along with the transcript and photos below!

The February Issue of WDW Magazine is built on a theme celebrating the “Tapestry of Nations”, and bringing a world full of cultural adventures together, as only Disney can. Naturally, that suggests a trip to that foodie Fantasia, that dreamland of deliciousness, the World Showcase.

But since the WDW Escape podcast has made more than one journey of the imagination to those parts in the last year, we have elected to celebrate the fact that sometimes one travels the world in order to appreciate your home more than ever.

To do that, let’s Escape together to a place so deeply American that it would make the Hall of Presidents blush: Pioneer Hall at Disney’s Fort Wilderness Resort and Campground, which for more than forty years has been the home to the Hoop -Dee-Doo Musical revue.

The sad fact is that, at this moment, your imagination is the only way to visit Hoop-Dee-Doo. The current pandemic has forced a temporary halt to one of the longest-running dinner theatre shows in American history.

Our Escape today is made with love and respect for the talented, dedicated Cast Members who make Hoop-Dee-Doo a reality, and with the fondest hope that we will soon have an opportunity to meet them in Pioneer Hall once again. 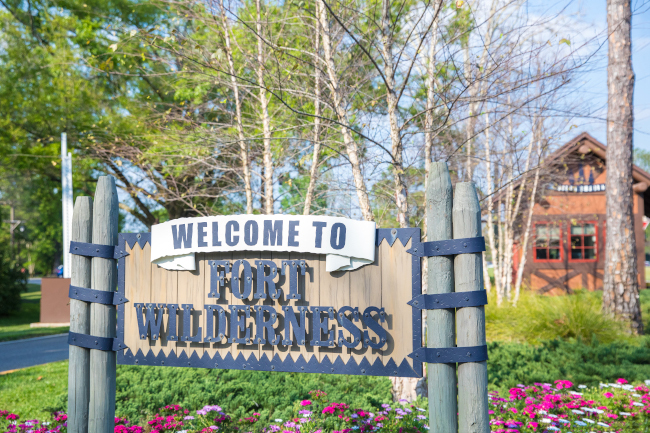 Getting there is part of the adventure with this show. Most of the delights of Walt Disney World are easily reached by fleets of gleaming buses, monorails, trams and even Skyliners, but for most folks bound for Pioneer Hall, it means a ride in one of the mighty ships in the world’s seventh largest navy, bound for Fort Wilderness.

Disney’s Fort Wilderness Resort and Campground, together with Disney’s Contemporary Resort and Disney’s Polynesian Resort, opened for visitors with the Magic Kingdom in 1971, and it is as steeped in Disney history as anywhere can be.

When my family first visited Hoop-Dee-Doo, it was our very first excursion on a Disney boat, and the experience did not disappoint. The boat ride is smooth, comfortable and welcoming.

If any part of the trip is nerve racking at all it is that departure times can be unpredictable. On that first occasion, my wife was eager to leave extra time to explore a resort she had never visited and was unlikely to ever stay in, having made the tactical error of marrying a man with a deep aversion to camping in any form.

Fort Wilderness is a unique Disney experience and well worth exploring. In subsequent visits we have allowed less time, and while we have never been late for curtain, we have cut it close once or twice, which is easily avoided by planning on a pre-dinner walk around the grounds, to help work up an appetite. 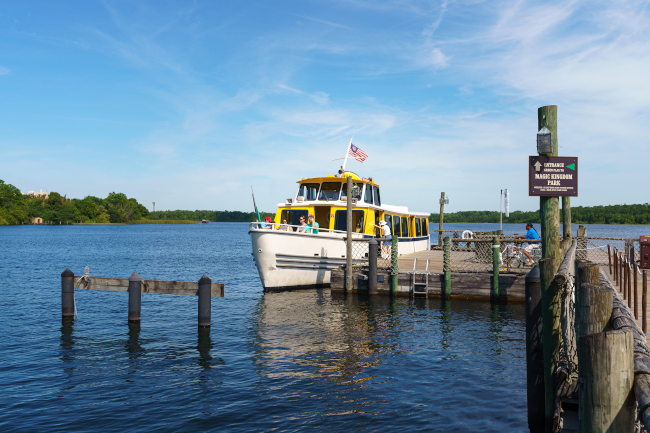 And you will need that appetite, friends, because this is one dinner theatre where the food is as much of an attraction as the show. Served family style, if your family enjoys eating out of tin buckets, which mine certainly seems to, this is a fun and tasty feast of all-you-care-to-enjoy Americana.

The truth of the matter is that the portions are so generous that you may never need to ask for seconds, especially if there are children in your party, but it is fun to know that more of anything is only a wish away.

The feast itself is down-home goodness, opening with delicious corn bread, served while the talented musicians warm up the crowd. More than 900 pounds of chicken are fried to satisfy the audiences of the three performances daily, together with 400 pounds of pork ribs smoked on-site.

Carried to the table in nature’s perfect silver service, a bunch of buckets, together with mashed potatoes, corn, baked beans and garden salad, this is a meal that you will long for until you can return, no matter how near or far you travel from to get here. Beer, Wine or Sangria is included as well, together with dessert… but that’s not until Act 2. 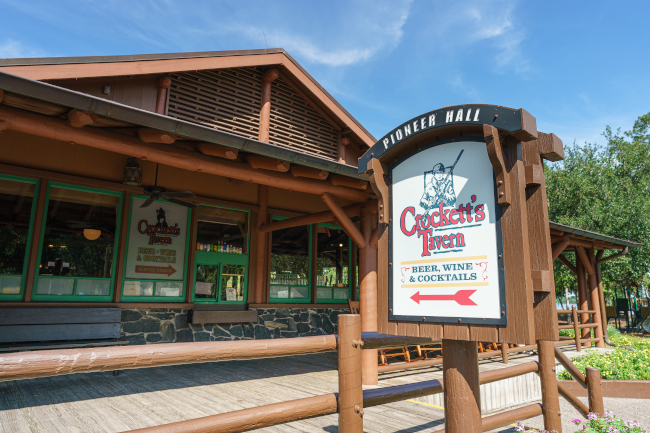 Pioneer Hall opened on April 1, 1974, and it was almost immediately filled to the top with Davy Crocket memorabilia. The Hall was created with the intention of adding to experiences outside of theme park hours, but there was conflict in the construction between sightlines ideal for performances, and the need to support the structure with massive pillars.

In the early months of Pioneer Hall, this conflict was settled by focusing on musical performances, like the Star-Spangled Washboard Band, who opened the space while something bigger and better was being prepared.

Soon that something was ready to meet the world. Briefly called We’re With You Mother Macree, a title which was presumably replaced for being just terrible, and the first incarnation of the Hoop-Dee-Doo Musical Revue made its debut on June 30, 1974.

While no one could have guessed that a continuous run of more than 45 years was in it’s future, it was immediately obvious that demand for the folksy, funny show would outstrip its planned 11 week run, and the cast of college interns was soon replaced by professional actors. 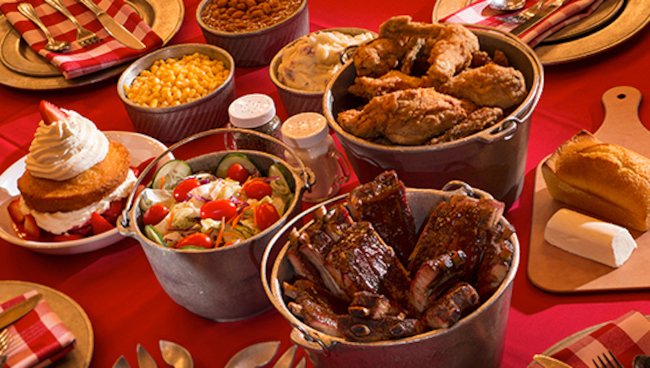 The true genius of the show’s creation, as with any great dinner theatre, was to make something that the audience would be engaged with, but not lose the plot if they found themselves distracted by a particularly succulent pork rib, which almost never comes up on Broadway.

A cast of six worked this magic, three men and three women, all playing entertainment archetypes that are just as recognizable today. There were two comic buffoons; Six Bits Slocum and Dolly Drew, a pair of straight-laced crooners; Jim Handy and Flora Long, and a pair of dancers, Johnny Ringo and Claire de Lune, who often steals the laughs away from the comics.

Together these are the Pioneer Hall Players, and they enter in early competition with the food, and with a stated intention no more complicated than to show you a good time while you eat, something that they never fail to do.

Ad-libbing extravagantly, they mingle with the diners, discovering birthdays, anniversaries, locations of bald men and small children and other vital bits of information that are sure to soon be part of the show.

Of particular interest is what state of the union each party has travelled from, which become a part of the “All-State Song”, sung to the tune of “She’ll be Coming Round the Mountain”.

And so we are off to the races. The show never becomes more sophisticated for a moment, audience members are roped into the proceedings to their great delight and the whole thing feels much shorter than it’s ninety minutes. 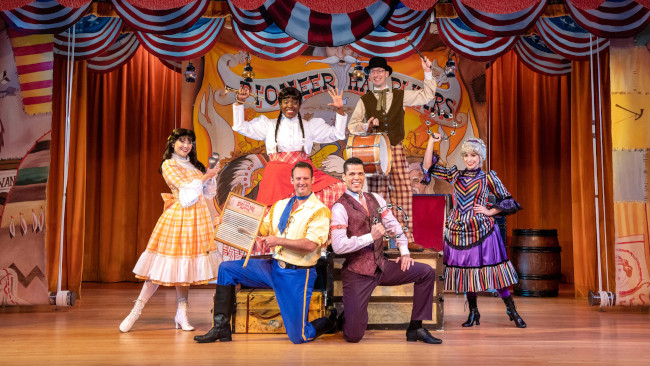 Many actors have taken a turn on the Pioneer Hall Stage over the years, adopting and adapting comic bits that have been alive longer than they have. Indeed, apparently the biggest change to the script over the years happened in 1979, when the kitchen stopped serving Apple Pie as dessert, necessitating the replacement of the musical number Apple Pie Hoedown with Strawberry Shortcake Walk, in which the servers themselves step out on stage, dancing and singing about your delicious dessert before bringing it to your table.

In fact, those servers are as much a part of the experience as the performers themselves. In our return visits, we have seen and enjoyed actors playing almost every role, but we have only ever had one server.

This past year, when my family and I were acknowledging a pandemic-postponed trip by watching a YouTube recording of the show, we recognized our server at once, doling out delicious desserts, and it is possible that there were a few tears shed, some of which might possibly have been mine.

Because like Walt Disney World itself, the Hoop-Dee-Doo experience is about strangers who come to feel like friends, and then quickly transform into family. Until the day comes when we can surround ourselves once again with the joyful, roof-raising racket of Hoop-Dee-Doo Musical Revue, we will continue to visit in our dreams, to imagine and to … Escape.