Celebrate Winnie the Pooh’s 95th Anniversary Across the World 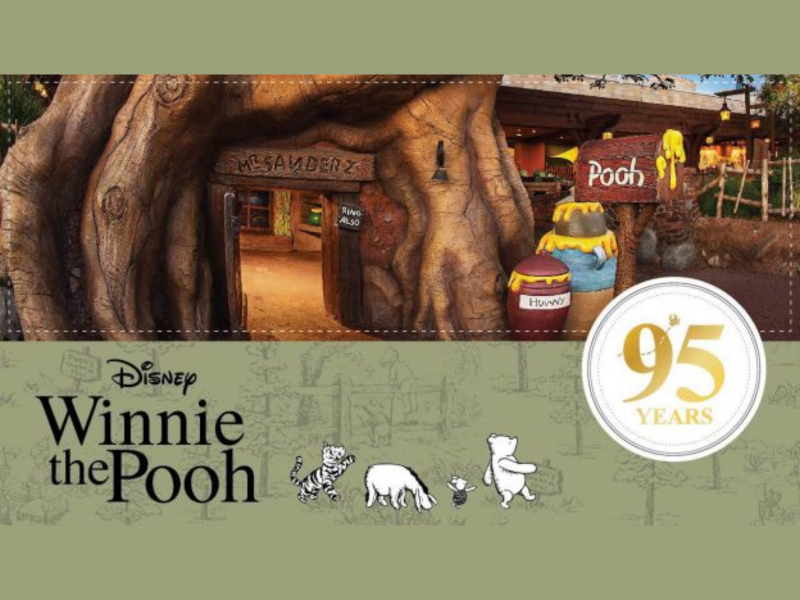 Not everyone can make 95 look good, but our favorite hunny-loving Pooh Bear pulls it off with style. Help celebrate Winnie the Pooh’s 95th anniversary on a virtual trip to Disney Parks around the world. 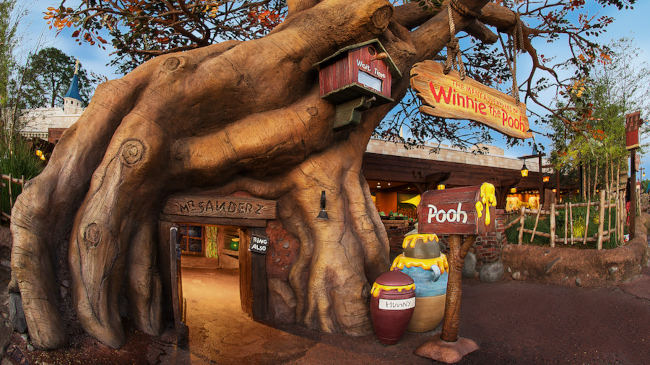 The Many Adventures of Winnie the Pooh at WDW Resort. Photo courtesy of Disney Parks Blog

Your trip starts at Walt Disney World Resort and The Many Adventures of Winnie the Pooh. Whether you’re reliving your love of Pooh from your childhood or taking the opportunity to introduce your kids to Pooh and his friends, this attraction is a must-visit

You’ll travel through Hundred-Acre Wood while sitting in a giant Hunny Pot as Pooh searches for honey. Along the way, you’ll see friends like Tigger, Piglet, Eeyore, Kanga, and Roo. And of course, you’ll also spot some Heffalumps and Woozles. 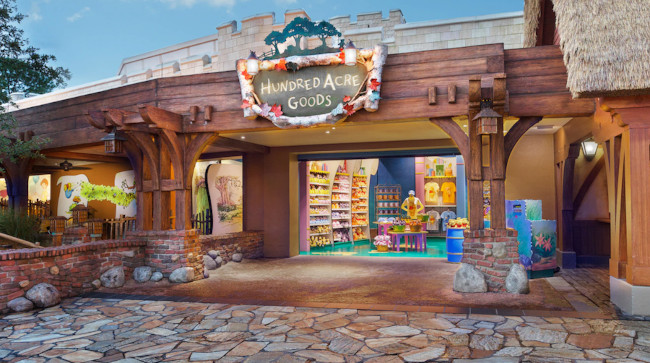 Another must-visit spot is Hundred Acre Goods—a souvenir store selling enough Pooh merchandise to fill a giant Hunny Pot. It’s right by the Pooh attraction, making it the perfect pit stop after you and your furry friends have found Pooh’s precious honey. 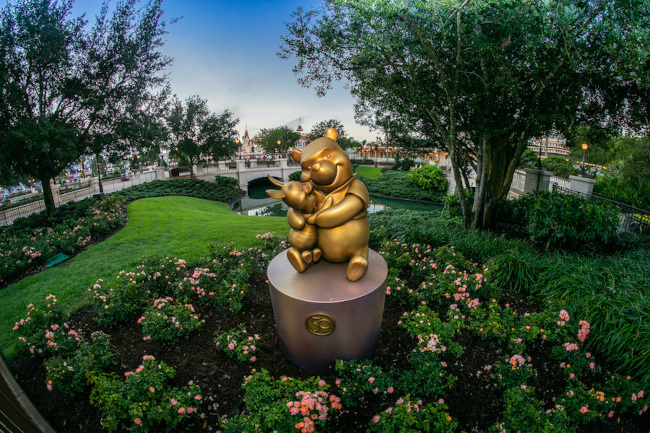 This golden statue of Pooh and Tigger is one of 50 celebrating WDW Resort’s 50 year anniversary. Photo courtesy of Disney Parks Blog

Also at WDW Resort, you can see a golden Winnie the Pooh statue that’s one of 50 that’s been erected to celebrate the park’s 50th anniversary.

Tired of hunting? Here’s how to find all the golden statues at Magic Kingdom. 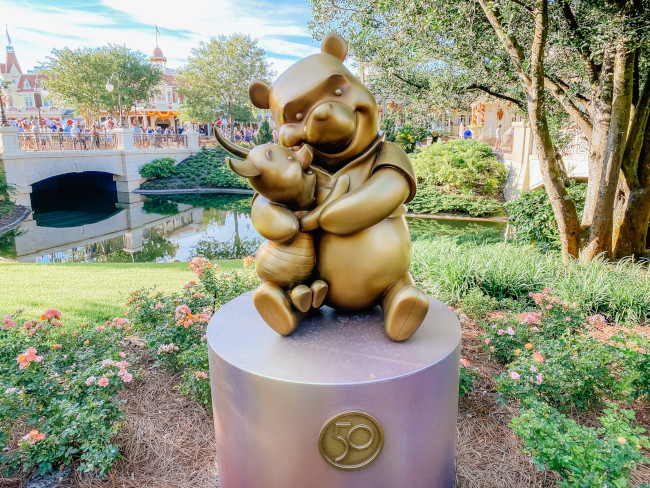 Ride in a Beehive at Disneyland Resort 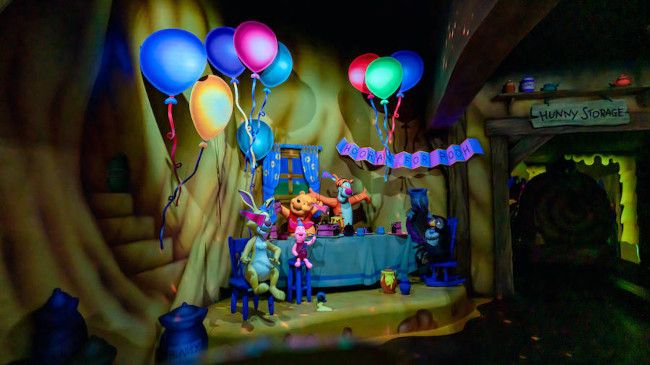 The Many Adventures of Winnie the Pooh at Disneyland Resort. Photo courtesy of Disney Parks Blog

At Disneyland Resort, the Winnie the Pooh attraction takes you through the most memorable moments from the classic movie while riding along in a giant beehive.

And, of course, you’ll help Pooh and his friend search for his precious honey. The attraction features a collection of classic Disney songs, so you can sing along to your faves while helping Pooh get his daily honey hit. 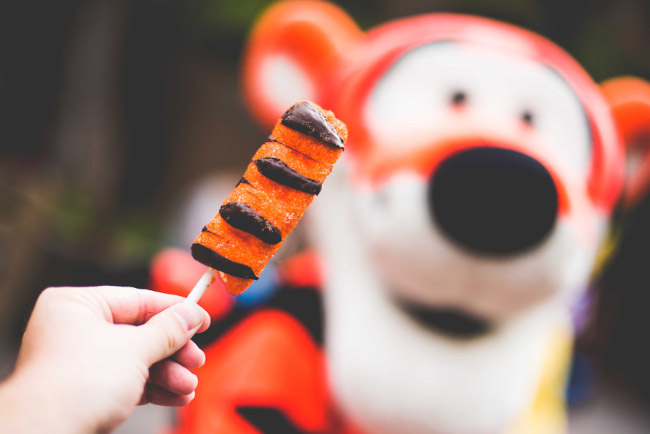 Feeling hungry after your ride? The Tigger Marshmallow Tail will help curb your hunger while giving you a much-needed sugar rush, Pooh Bear-style. 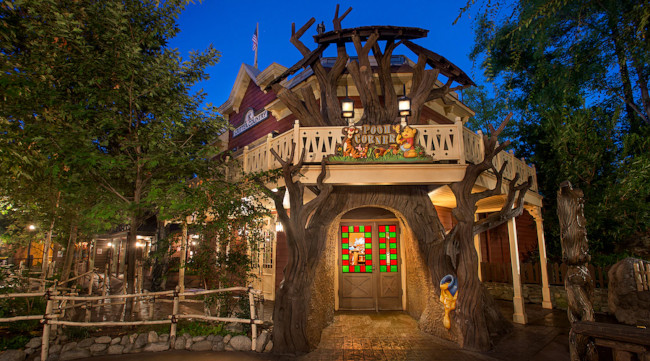 You can also celebrate your favorite animated bear by visiting Pooh Corner to buy some merchandise straight from the Hundred-Acre Wood. Even Eeyore would have trouble finding something to complain about in this unique souvenir store. 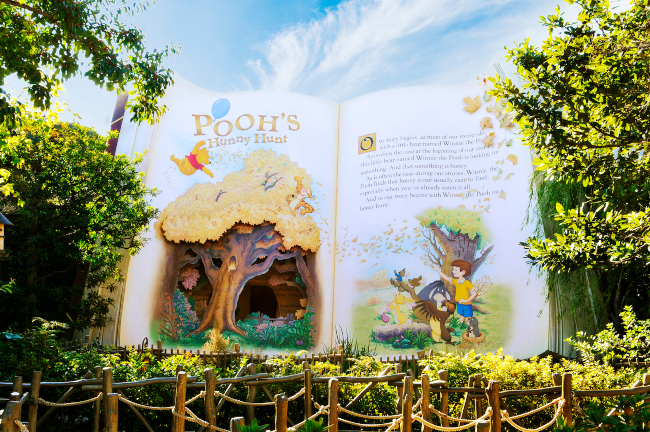 The Pooh-themed fun continues at Tokyo Disney Resort where you can help Pooh find his honey at Pooh’s Hunny Hunt. On this ride, you’ll watch as Pooh and his friends explore the Hundred-Acre Wood in search of the sticky golden nectar.

Like with the Pooh-themed rides at other Disney Parks resorts, you’ll do so from the comfort of a giant Hunny Pot. 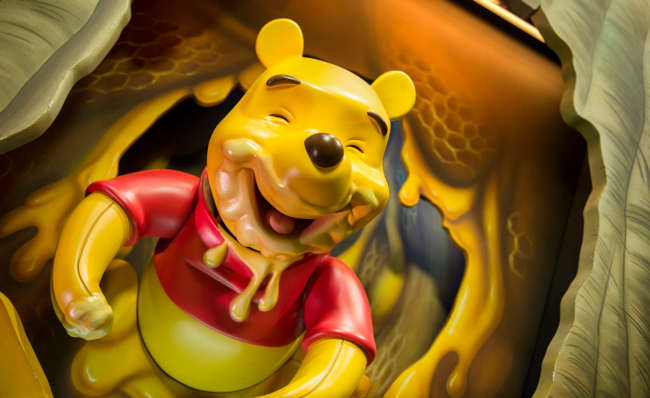 Not to be left out, Hong Kong Disneyland Resort also has a version of The Many Adventures of Winnie the Pooh. Just like at WDW Resort, you’ll explore Pooh’s home from the comfort of a giant Hunny Pot. See Pooh’s friends as they explore Hundred-Acre Woods and share along with their experiences while singing to your favorite Disney songs.

After your ride, snack on a Pooh and Tigger Lollipop Donut or Winnie the Pooh Mango Jam & Piglet Raspberry Jam Lollipop Cookies as you get your energy up for more magical adventures.

A trip to The Many Adventures of Winnie the Pooh attractions at these three Disney Parks is the perfect way to pay tribute to the famous bear who has been entertaining kids of all ages for almost 100 years. How will you be celebrating Winnie the Pooh’s 95th anniversary?

These Winnie The Pooh Hunny Pots Will Make Your Tumbly Rumbly