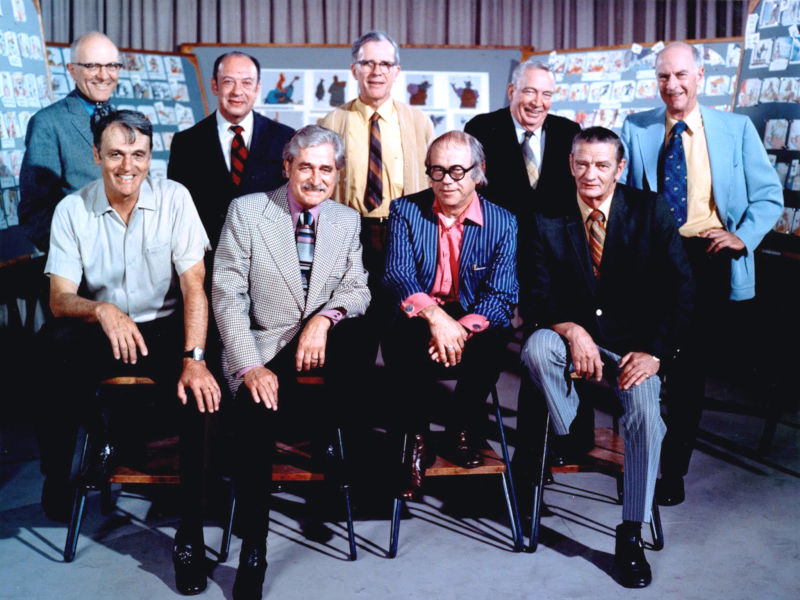 Scroll on to learn more about Walt Disney’s Nine Old Men and how they changed animation as we know it.

Even Walt himself probably didn’t foresee the success that his company would achieve in the decades that preceded the founding of the Walt Disney Company.

That triumph—both artistically and commercially—wouldn’t have happened without the dedicated team of animators who put pencil to paper day after day.

Rather than being high-ranking executives who ran the company, these renowned artists were the employees who carried dozens of motion picture productions from concept to screen.

From Snow White and the Seven Dwarfs to Robin Hood, we have over 40 years of animated masterpieces to enjoy thanks to Disney’s Nine Old Men.

Learn about this innovative, industrious gang of cartooners with this spotlight on Walt Disney’s Nine Old Men. 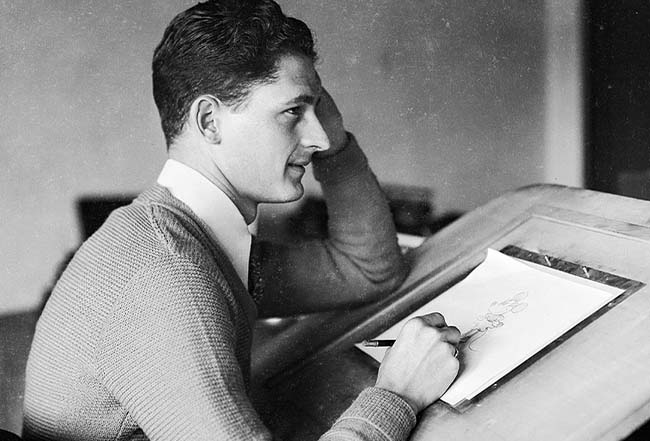 Walt Disney didn’t hire his now-famous crew of animation specialists all at once. Rather, the team gradually assembled from 1927-1935 as Walt Disney Productions grew from a fledgling animation company to an industry-changing juggernaut.

By 1937, with the creation and release of the studio’s seminal work, Snow White and the Seven Dwarfs, the staff’s most gifted artists had rallied into a hard-working, well-oiled animation machine. From then on, Disney’s Nine Old Men consisted of:

All of these animators were inducted in 1989 as some of the very first members of the Disney Legends Awards Hall of Fame.

Why Did Walt Call Them His “Nine Old Men?” 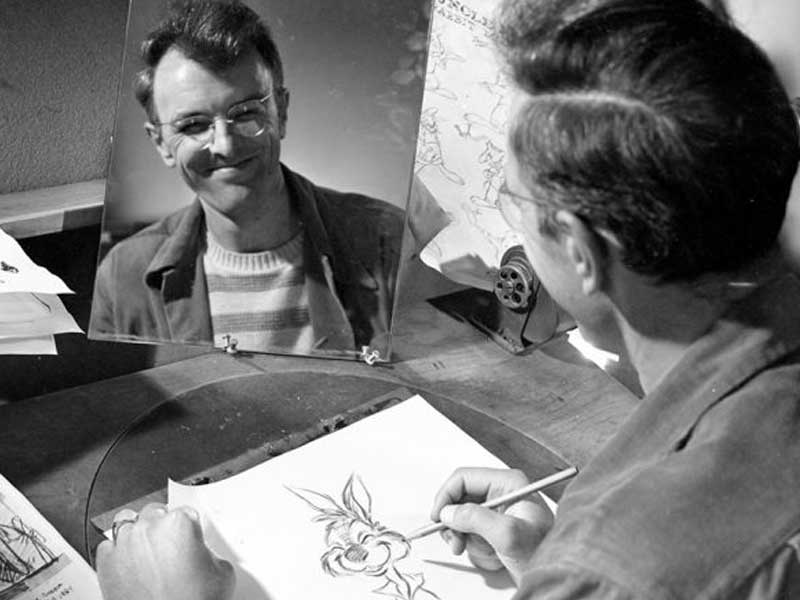 Considering these animators were only 25-30 years of age when Walt started referring to them as his “nine old men,” why did this gang of young adults receive such an odd moniker?

In the same year that Snow White and the Seven Dwarfs debuted at movie theaters, the book The Nine Old Men was published.

It took its title from Franklin Roosevelt’s description of the US Supreme Court Justices as he campaigned for his New Deal: “nine old men, all too aged to recognize a new idea.”

Walt got such a kick out of the description that he began jokingly referring to his most reliable animators as his own “nine old men.” However, rather than being old and out of touch, these men were young, inspired, and leading their craft. 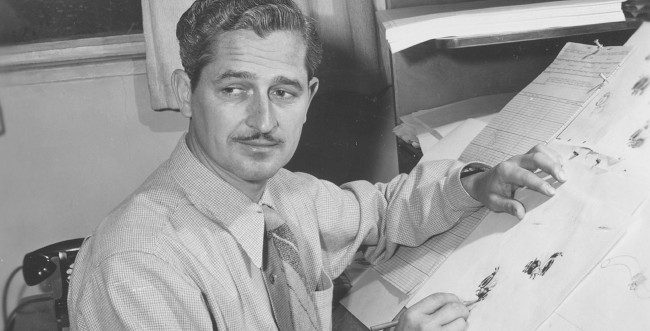 The first of the “nine old men” to join the company, Les Clark started working at the studio in 1927, performing menial tasks like operating cameras and scanning other people’s drawings.

He gradually established himself as a gifted animator among his peers, particularly when it came to depicting characters’ poignant emotions in subtle, nuanced ways.

Les also had an impeccable knack for matching animated movement in time to music, having proven his aptitude on the 1929 Silly Symphony The Skeleton Dance and the dance sequence for “A Silly Song” in Snow White and the Seven Dwarfs.

Les became known for his matchless ability to animate Mickey Mouse, even outdoing his mentor, the character’s designer Ub Iwerks. 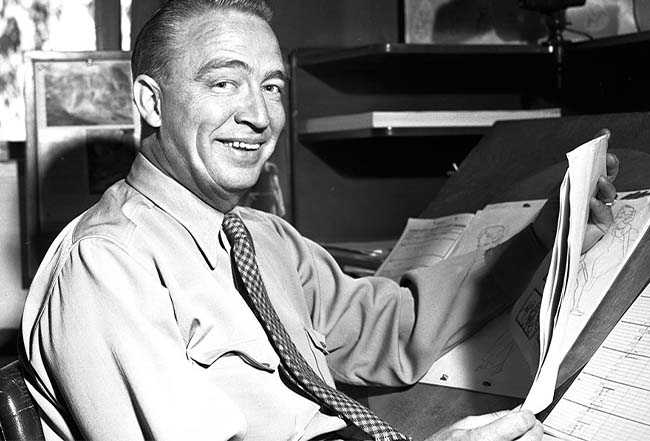 Six years after Les joined the studio, the second of Disney’s Nine Old Men came on staff. A journalist by trade, Eric Larson was hired as an inbetweener. before being promoted to assistant animator.

His big break came when he demonstrated his ability to produce pantomime animation in the full-length feature Pinocchio.

In the 1970s, at the time when the Nine Old Men began retiring from the business, Eric recognized the imminent need to gather young talent. So he expanded the studio’s program to recruit and train up-and-coming artists to carry the studio’s legacy.

Eric thrived when he had creative freedom and helped other animators flourish. He was a skilled mentor—a rarity among the studio’s veterans—who gladly passed along techniques to young proteges like Andreas Deja. 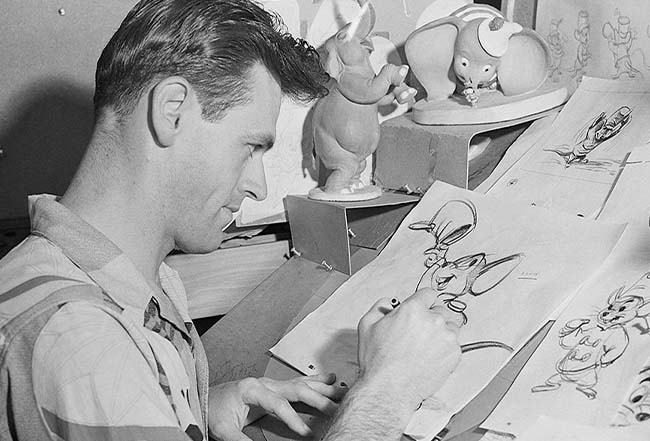 The same year that Eric came aboard, Wolfgang Reitherman also joined the staff. Impressed with Wolfgang’s artwork, Walt hired him as an animator to work on short productions like Funny Little Bunnies and The Band Concert.

In contrast to many of his peers, Wolfgang’s animation skills were on full display in grand, thrilling moments rather than gentle or comedic ones.

He created sequences such as the battle between Prince Phillip and Maleficent, the Headless Horseman’s terrifying chase, Monstro’s epic attack, and the dinosaur fight in Fantasia’s “The Rite of Spring” segment.

When Walt passed away in 1966, Wolfgang stepped up and began producing the studio’s films. His knowledge and leadership helped the company survive a difficult transition period as he helmed the direction of The Aristocats, Robin Hood, and The Rescuers. 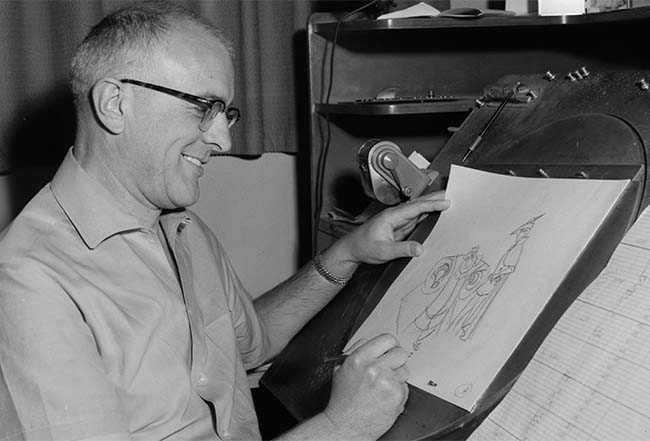 As the studio’s productions began to grow, and the company took its first steps toward the creation of Snow White and the Seven Dwarves, a wave of new animators came on board.

Milt Kahl was one of those young men hired in 1934. As an assistant animator, he worked on the film while also pitching in on the shorts still being made in the meantime.

Unlike other animators who yearned for creative autonomy, Milt recognized the necessity of mundane, monotonous animation tasks just as much as the glamorous ones. Thus, he was willing to handle the more generic, boring characters that no one else wanted to draw.

With as much time as he spent depicting such characters, he developed certain idiosyncrasies—like the iconic “head swaggle” as well as mastering details like realistic hands. 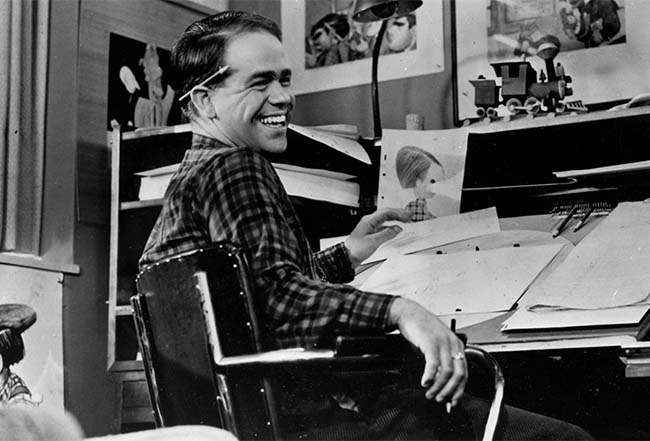 Another talented drawer hired in 1934 as an inbetweener who quickly became an assistant animator, Ward’s passion was for drawing exaggerated, comic characters rather than realistic ones.

Walt immediately saw the young man’s talent and put him in a position of supervising animator, where he stayed for three decades.

Ward developed the designs for many iconic characters, such as Jiminy Cricket and Pecos Bill. He enjoyed drawing all the extravagant characters in Alice in Wonderland, though many people consider The Three Caballeros to be the best work of his career.

While he did contribute to a handful of feature-length films, Ward’s preference was for helming the creation of theatrically released shorts like “It’s Tough to Be a Bird,” which won the Academy Award for Best Animated Short Film in 1970. 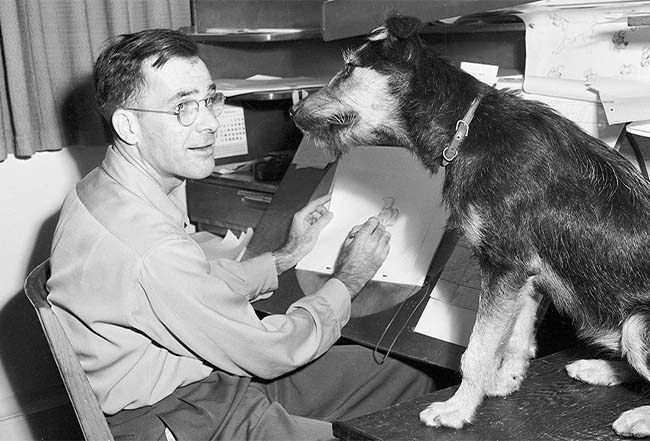 Yet another animator who was hired in 1934, Frank Thomas joined Walt Disney Productions as employee number 224. He did a lot of uncredited work on the many short films churned out from 1935-1943 in addition to his contributions to the studio’s feature-length films.

His reliability and talent gradually earned him the role of a directing animator, overseeing the drawing of many classic characters. Some of them he even created himself, like Captain Hook and The Queen of Hearts. His most iconic scene is the romantic spaghetti dinner in Lady and the Tramp.

With his best friend and fellow Disney animator Ollie Johnston, Frank co-wrote the book Disney Animation: The Illusion of Life in 1981, widely regarded as one of the best books on animation ever published. In it, the duo shared Disney’s 12 basic principles of animation, which many animators still follow today. 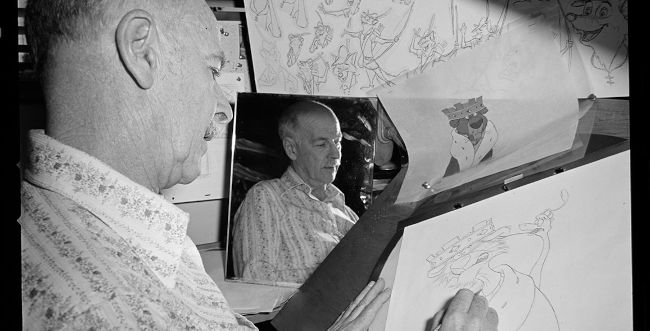 You can’t talk about Frank Thomas without talking about his best friend, Ollie Johnston, who started his employment at Walt Disney Studios around the same time. The pair worked on dozens of feature films together, from Pinocchio to The Fox and the Hound. His notable works include Mr. Smee and Cinderella’s stepsisters.

Ollie had a passion for trains and built a miniature replica of the La Cañada Valley in his backyard. That’s what inspired Walt to build his own railroad, which consequently led to the creation of Disneyland.

He and Frank served together on the board of the National Student Film Institute after they retired. The duo made cameos in The Iron Giant and The Incredibles.

Ollie was the last of the Old Men to survive, passing away at the age of 95. A few years prior to his death, Ollie was given the National Medal of Arts by President George W. Bush. 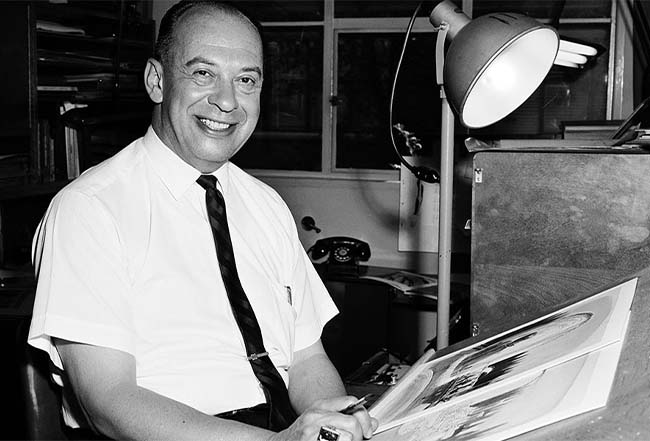 Marc joined Disney later in the production of Snow White and immediately showed his creativity and great skill, which helped distinguish him among his colleagues.

His friends called him as a “ladies’ man” because he was highly regarded for his ability to draw female characters, having animated Tinker Bell, Cruella De Vil, and Maleficent, along with classic princesses like Cinderella and Aurora.

Later in his career, as Walt worked on launching Disneyland, Marc jumped from the company’s animation studio to Walt Disney Imagineering, where he drafted up the designs for over a dozen attractions, like Pirates of the Caribbean and Haunted Mansion.

Our Pirates of the Caribbean attraction special dives deep into Marc’s work on the attraction. Order a copy to learn more about Marc’s incredible contributions. 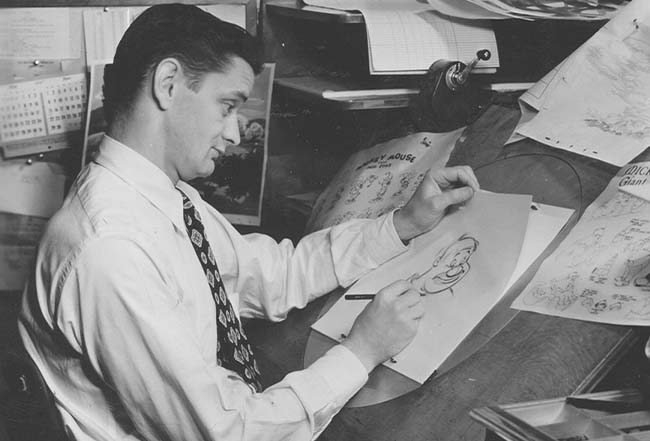 Of all the names on this list, John Lounsbery’s is probably the least known. He didn’t achieve the notoriety later in his life that other “Old Men” like Milt or Ollie did—mostly because of his quiet, meek nature.

Still, John was respected among his peers for his draftsmanship. He had an unparalleled ability to take a sketch made by any of the studio’s other animators and near-perfectly imitate their style when putting it in motion. He excelled as a cartoon drawer, making big expressions and fluid, stretchy movement.

John joined in 1935 as an assistant animator to Norman Ferguson, and together they spent a lot of time animating the short films starring Pluto. Tragically, John passed away during the production of The Rescuers, which he had been co-directing.

How to Learn More About Walt Disney’s Nine Old Men

This article merely scratches the surface when it comes to spotlighting the life and achievements of Walt Disney’s Nine Old Men. If you want to learn more about these underappreciated animators, there are some excellent sources you should track down.

Historian John Canemaker’s book Walt Disney’s Nine Old Men and the Art of Animation (2001) is a comprehensive, 300-word delve into the lives and accomplishments of these influential artists.

For more casual Disney fans or ones with less time on their hands, check out the charming 1995 documentary Frank and Ollie.

Although the film focuses primarily on those two members of Disney’s Nine Old Men, their first-hand accounts of their work provide a glimpse into Disney Studios’ formative years.