Where to Get a Dole Whip at Disneyland 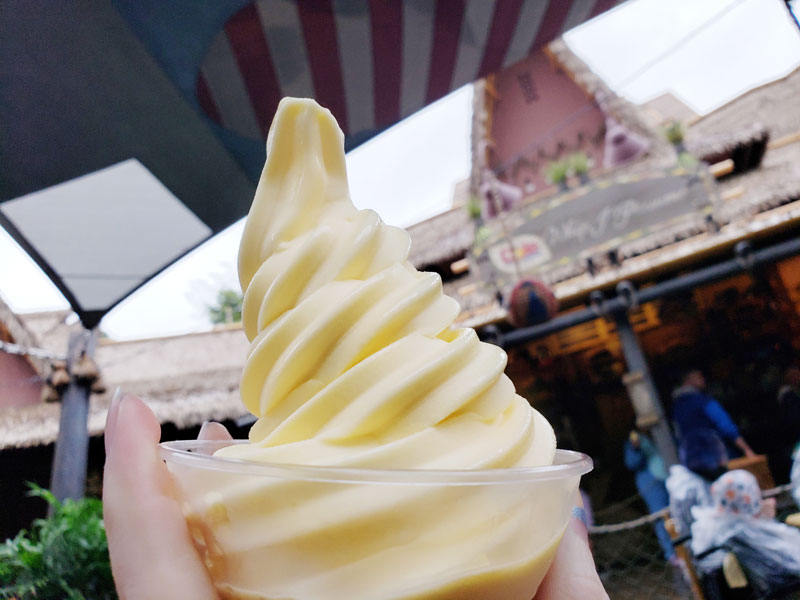 Disneyland Dole Whips just hit different. Here’s where to get a Dole Whip at Disneyland with all the tropical atmosphere.

Created by Dole, the Dole Whip frosty pineapple soft serve made its way to Disneyland in 1986. This fat-free, dairy-free, and gluten-free with no cholesterol treat has only three simple ingredients, and yet, it’s one of the most iconic snacks in Disney Parks.

Fans love it so much they have made everything from lip balm to shirts to candles and Mickey ears in its honor. And although you can find a pineapple-flavored whipped soft serve almost anywhere, true fans believe it just hits differently in Adventureland.

When Walt first opened his Enchanted Tiki Room in 1963, there was nothing served alongside it. Fast forward to 1986 when a brand new product was introduced—The Dole Whip. And they continue to bring delight (as well as steady lines) to Disneyland and Walt Disney World today. 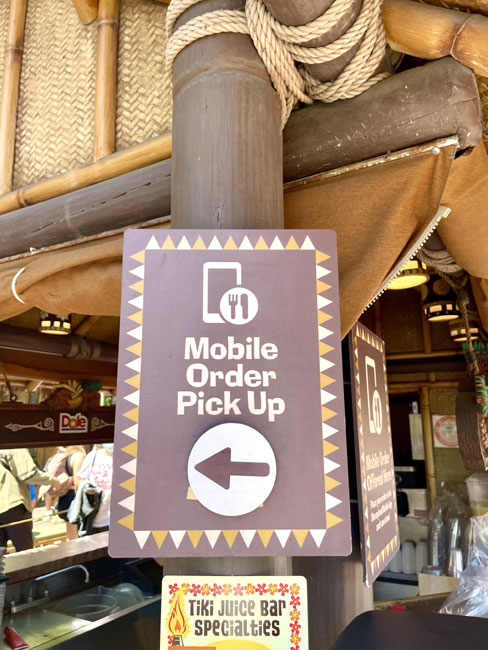 Mobile Order to get your Dole Whip to go! Photo by Kristen Carr

It took five years for Disneyland to add this kiosk cart to the exterior waiting area of Walt Disney’s Enchanted Tiki Room. Even then, this Tiki Bar walk-up only served pineapple spears & pineapple juice until Dole Food Company became a sponsor of the fruit and juice, and ultimately debuted the whips.

This location does offer Mobile Order, which makes pick-up a breeze. And if you time it right, you can enjoy the Audio-Animatronic birds followed by a simple cup of Dole Soft Serve.

This location is considered a cart/kiosk and does not offer any discounts. 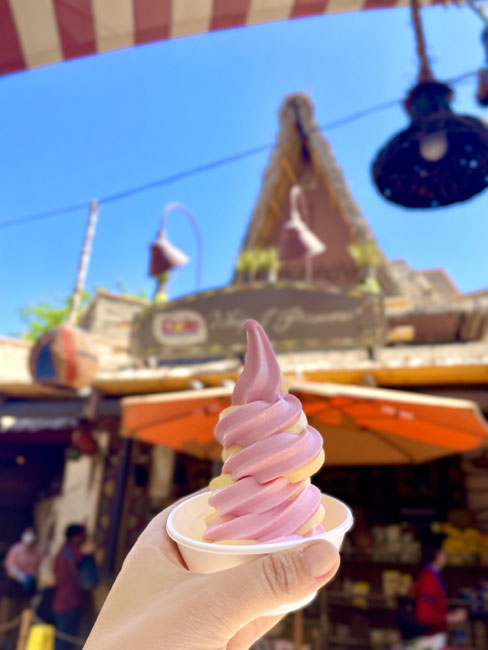 Located just behind Walt Disney’s Enchanted Tiki Room on the banks of the Jungle Cruise attraction waters is the Tropical Hideaway. This Quick Service location was added in 2018 and its offerings consist of the Dole Whip in whirl form as well as rotating seasonal specialty items and additional flavors throughout the year.

This location is considered a Quick Service restaurant but does not offer any discounts.

Tropical Hideaway Has Dole Whips With a Twist 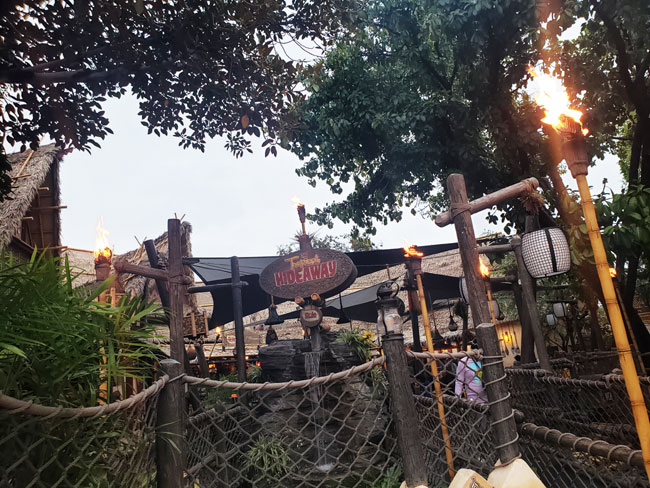 This opportunity for complete immersion into Disneyland theming alongside fresh fruit in a theme park is high on my list.

A refreshingly simple frozen whip with fruit topping is always welcome on long, hot days filled with quick snacks, sugary treats, and fried meals. Add in the ambiance of this location and you have the perfect Disneyland experience. 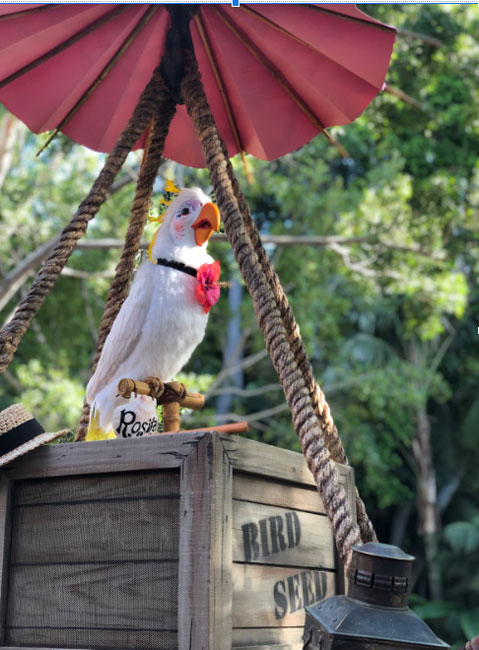 Rosita waiting for her ship to come in. Photo by Kristen Carr

Music fills the atmosphere, and Tiki Room favorite Rosita, the animatronic bird, chirps one-liners as guests float by on the tail end of Jungle Cruise along the banks. Few locations in Disneyland offer a more perfectly synced respite. 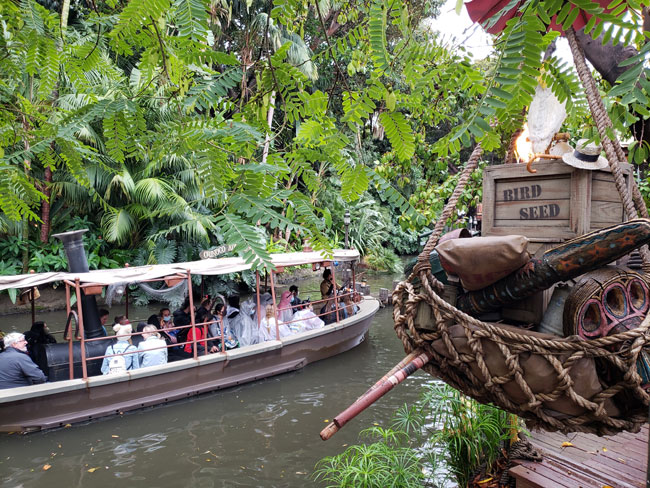 You can hear Jungle Skippers cracking jokes on the river nearby. Photo by Rain Blanken

In the past, Disneyland and Disney World have debuted special Dole Whips to celebrate occasions like “Dole Whip Day” every July 19. As a cult dole whip fan myself, I live for these limited-time upgrades and rare secret menu offerings. 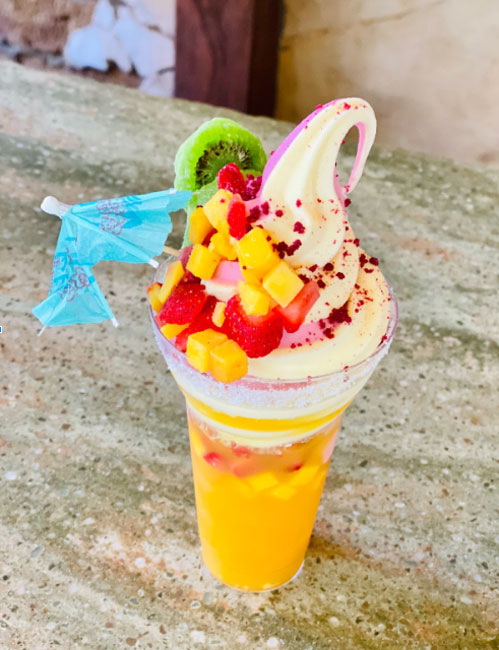 My personal favorite was a Dole Whip float of raspberry-lemon swirl with passionfruit, orange, and guava juice, topped with candied Kiwi and fresh fruit topping.

Dole Whips Beyond the Parks 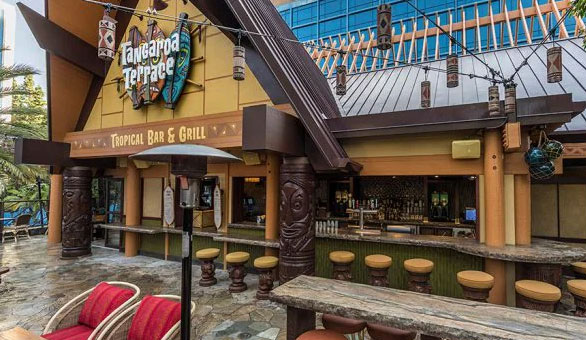 Just visiting Downtown Disney for the day or have a rest day scheduled from the parks? There is one place you can get an official Disneyland Dole Whip without a theme park ticket: The Disneyland Hotel.

The pool has a walk-up Quick Service called Tangaroa Terrace that offers Dole Whips and floats. If you’re looking for an even more immersive experience outside the parks, the famous Trader Sam’s Enchanted Tiki Bar will make you a Dole Whip with a splash of rum!

One little-known fact: There is no actual pineapple in a Dole Whip.

As of 1977, Kent Precision Food Group obtained the license to produce and supply the exclusive mix to Disneyland. They also offer the mix online to outside vendors, restaurants, and retailers across the country but call it “Dole Soft Serve.” Disney Dole Whip purists swear the two are not the same. 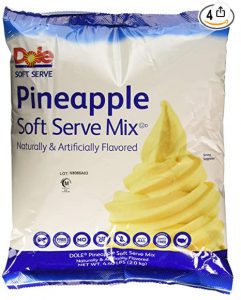 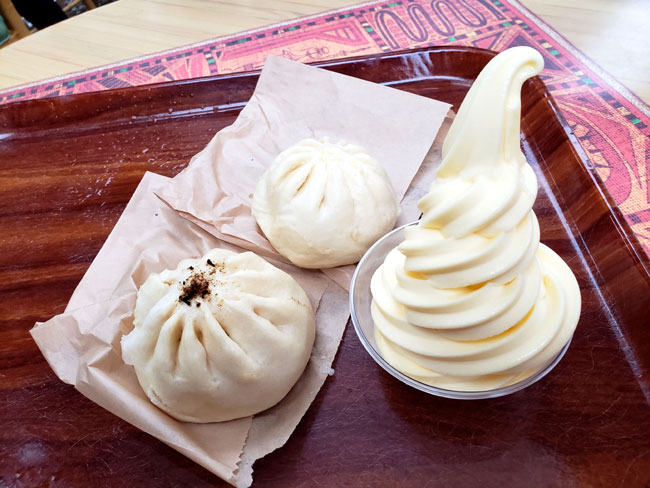 If a Dole Whip is on your agenda for your next Disneyland visit, I would recommend snagging a table along the waters of the Tropical Hideaway. Order a swirl off the menu and take in the lush sights and sounds.

Along with Dole Whips, Tropical Hideaway also features a variety of steamed bao buns to snack on, making this a great pit-stop before venturing further into Adventureland.

If you don’t have time for that little getaway, Mobile Order a Dole Whip from the Tiki Bar and enjoy it after a visit to the Enchanted Tiki Room. If your next Disneyland trip is further in the distance, you can follow our Dole Whip Recipe and read about our taste test.

Kristen Carr has been a Disney fan her entire life, is a local former AP, now Magic Key holder, park hopping Mama of 4, and therefore the ultimate cold-brew connoisseur. Find her with a Disney snack in hand, pushing a double stroller, while posting to her instagram @TheHappiestClubonEarth. Disney balloons, the archives, and event planning keep her passion for magic alive while 2-4 hours of sleep a night do not.

Kristen Carr has been a Disney fan her entire life, is a local former AP, now Magic Key holder, park hopping Mama of 4, and therefore the ultimate cold-brew connoisseur. Find her with a Disney snack in hand, pushing a double stroller, while posting to her instagram @TheHappiestClubonEarth. Disney balloons, the archives, and event planning keep her passion for magic alive while 2-4 hours of sleep a night do not.