Where Is the Purple Wall at Disney World? 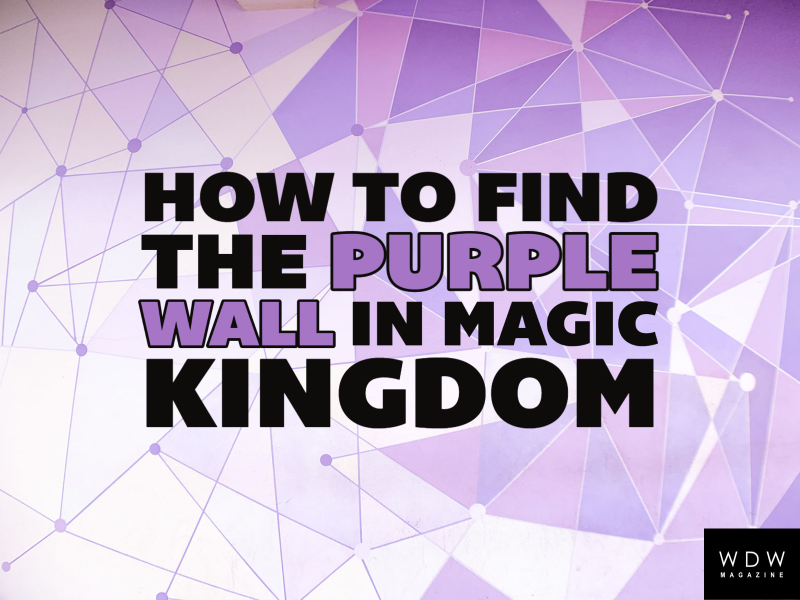 The Purple Wall: A Disney World icon that has grown as Instagram-famous as Spaceship Earth and Cinderella Castle. But where is the Purple Wall, and why is everyone so fascinated with it?

“Meet me at the Purple Wall.” It’s an expression that’s become as common as “Meet me in the hub” when texting friends your whereabouts or agreeing on a meet-up place with a fracturing family. But the Purple Wall has only been an iconic part of the now 50-year-old Magic Kingdom for roughly the last half a decade.

So where is the purple wall, what does it look like, and how did it suddenly land on every Millennial’s and Gen Z’s bucket list at Disney World?

Where Is the Purple Wall? In Tomorrowland … Barely

The Purple Wall at Disney World is located just at the entrance of Tomorrowland in Magic Kingdom, tucked away to the side on a little-used walkway that connects to Main Street. If you weren’t explicitly searching for this specific wall, it’s likely you’d never even pass it, even if you spent all week at Magic Kingdom. 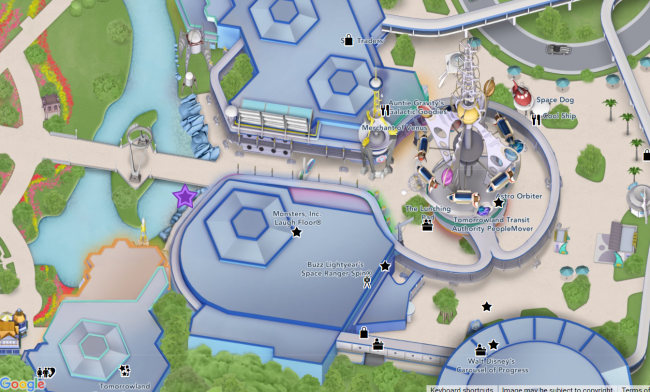 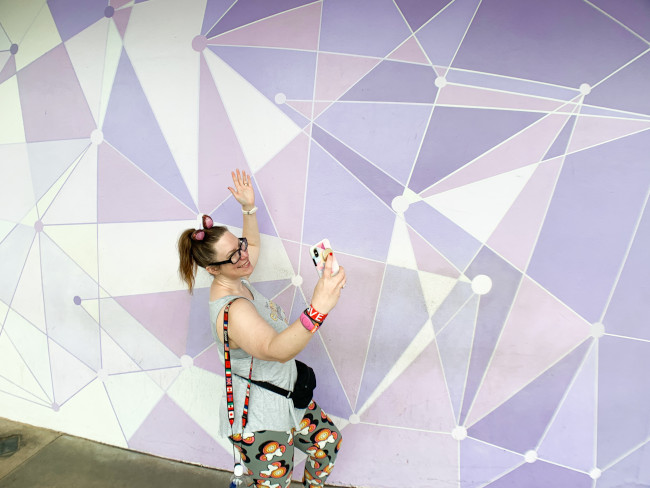 Or, if after burning off too many calories laughing with your favorite monsters, you decided you wanted a Lobster Roll from Tomorrowland Terrace, you might zip by the wall on your way to the restaurant.

That was until 2015, when Instagrammers found the iconic wall that always seems to have nice lighting.

How to Find the Purple Wall on a Disney World Map 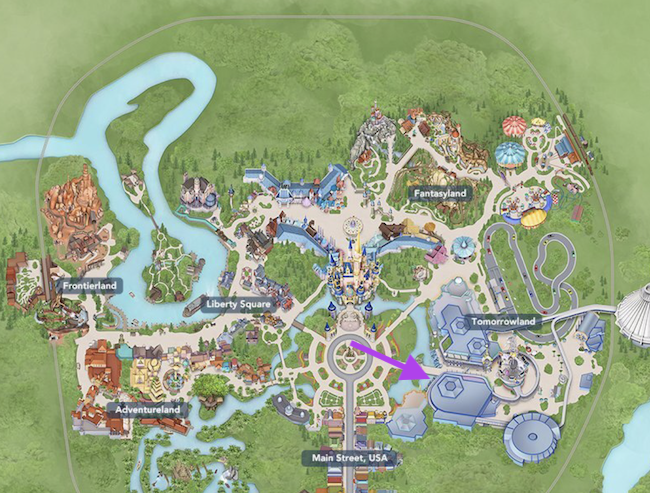 Disney doesn’t point out the wall on its map, so save this image for your trip

The History of the Purple Wall

For about three years, the Purple Wall was famous, a nice shade of lilac that served as a good backdrop for social media photos. You know, because if you didn’t take a picture at Disney World and post it online, were you even really there?

But then, in 2018, Disney did the unthinkable. They painted the wall. Blasphemy!

Luckily, the geometric design of the repainted Purple Wall sat well with selfie-takers (and it’s still purple, phew). In fact, the new wall was even more appealing to the eye and has encouraged even more photography. 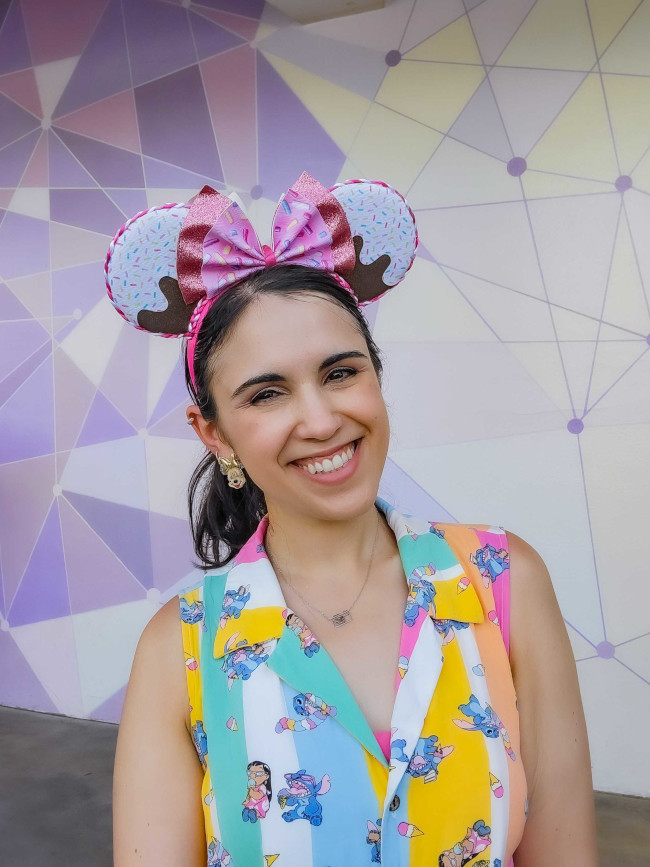 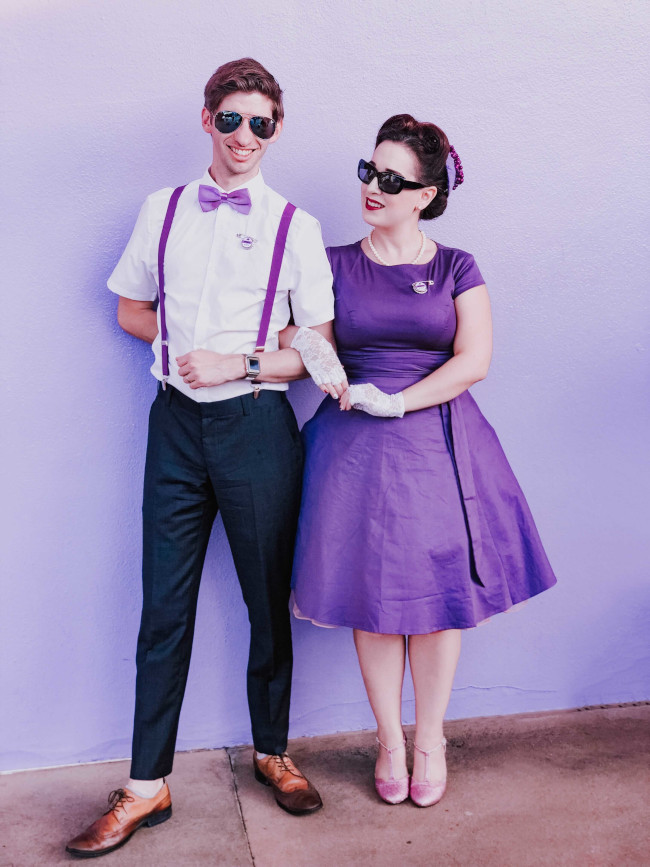 Color coordination for the win! Photo courtesy of Esther Vallins 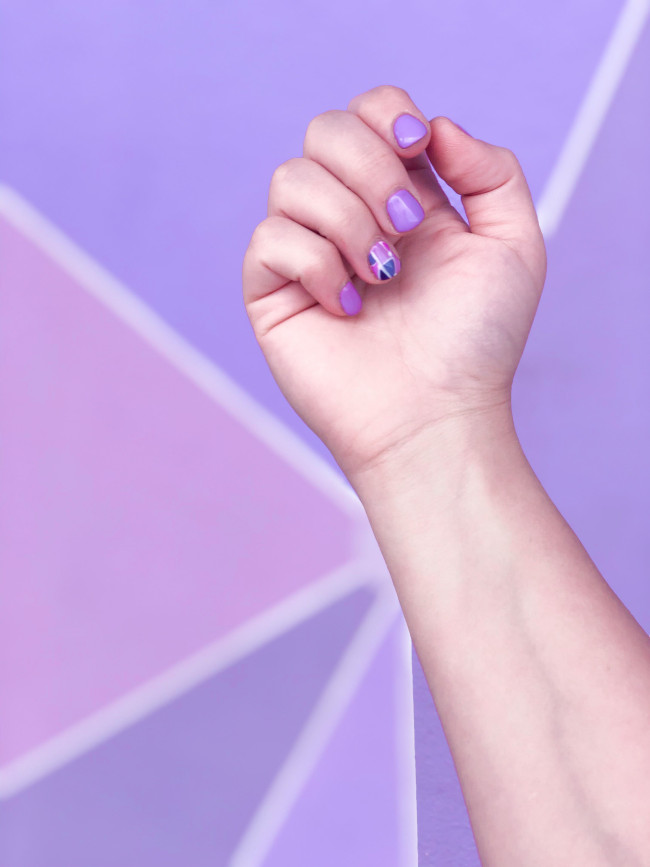 Matching right down to the fingernails. Photo courtesy of Esther Vallins

There’s nothing noteworthy over this way, but without fail, if you’re heading into Tomorrowland from the hub and look right, you’ll likely see someone posing for pictures—and on busy days, a line of others waiting for their turn. 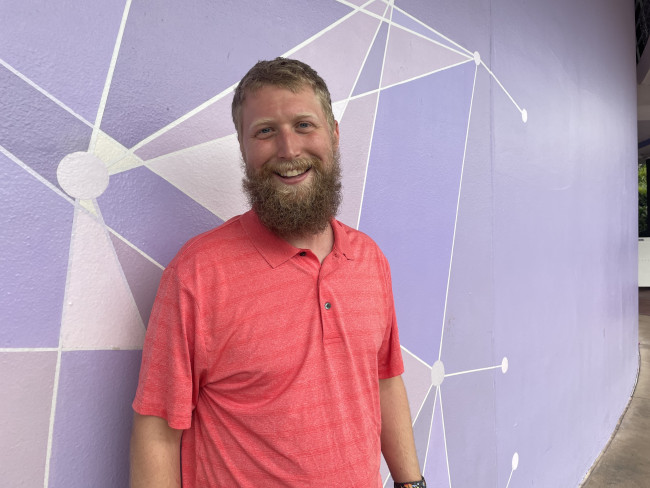 Me pretending not to be super uncomfortable to have my picture taken while I’m drenched in my Orlando sweat and ready to explode from one too many Mickey Bars. Photo by Todd Turner

I wouldn’t be surprised if the Purple Wall didn’t get its own Lightning Lane here soon.

No, seriously. Disney has leaned into the Purple Wall craze with its own Purple Wall merch, including ballcaps and even MagicBands. 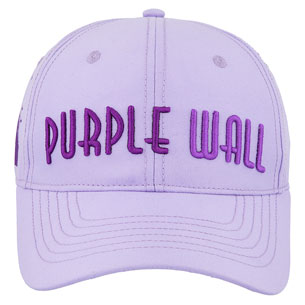 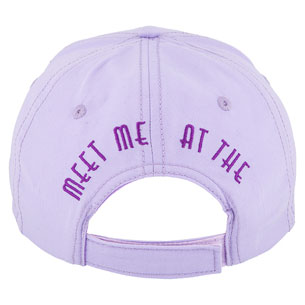 Want to take a ride even further back in Disney history? Check out our special Time Capsule issue of WDW Magazine, which takes us through little-known moments in Walt Disney World history. Just $12 for the back issue while supplies last! 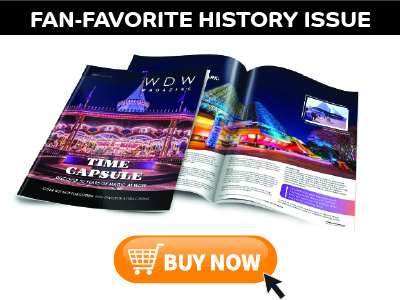 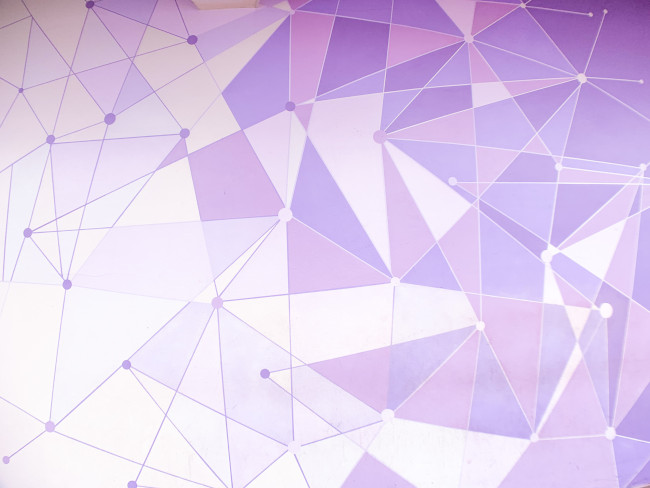 The Purple Wall may be the most famous Disney Wall, but it’s not the only one. Photo by Stephanie Shuster

The Purple Wall may be the most popular Disney Wall, but several others at Disney World have caught the attention of Instagrammers.

The Purple Wall in Magic Kingdom

Where to find the Purple Wall in Magic Kingdom: To the right of the entrance to Tomorrowland, between Tomorrowland Terrace Restaurant and Monsters, Inc. Laugh Floor. 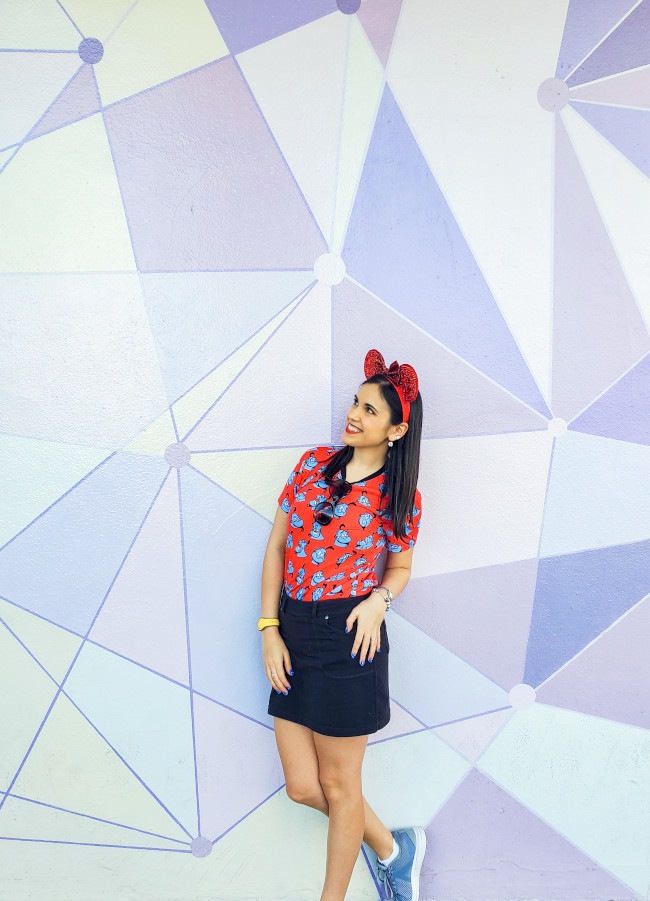 Tatjana at the Purple Wall. Photo courtesy of Tatjana Lazar

Where to find the Tangled Restroom Wall in Magic Kingdom: Sorry, gentleman. This one is for the ladies only. Head to the super cool restrooms in New Fantastyland and wait for the moment the sun is bright enough to hit it just right. 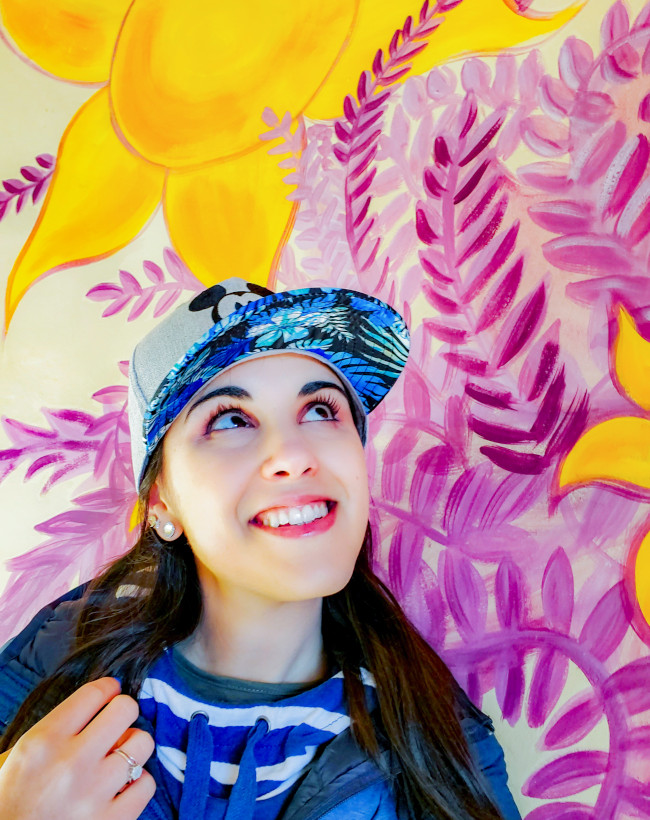 The Bubble Gum Wall in EPCOT

Where to find the Bubble Gum Wall in EPCOT: On both sides of the exit of Spaceship Earth. 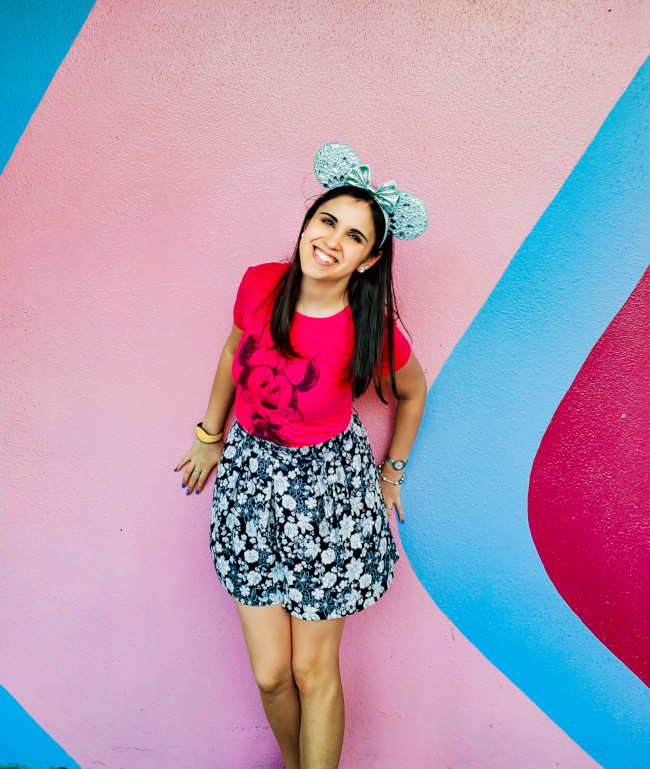 The Blueberry Wall in EPCOT

Where to Find the Blueberry Wall in EPCOT: Just a few steps down from the Bubble Gum Wall. 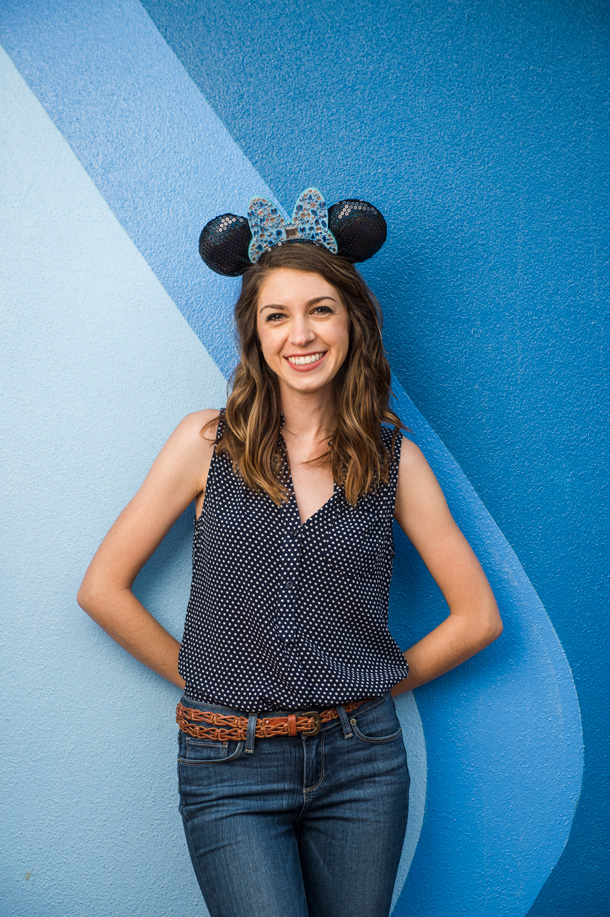 The Toothpaste Wall in EPCOT

Where to Find the Toothpaste Wall in EPCOT: Exit The Seas with Nemo and Friends Pavilion to find the iconic Toothpaste Wall. Just make sure there’s nothing in your teeth before taking the picture. 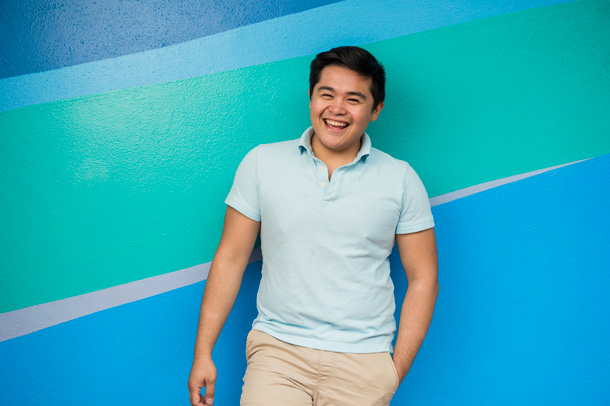 Where to find the EPCOT Construction Walls: EPCOT has been a hot mess as Disney finishes up its historic renovation of the theme park, but that just means more fun walls to pose with. (If you love this design, there’s EPCOT construction wall merch at the Creations Shop.) 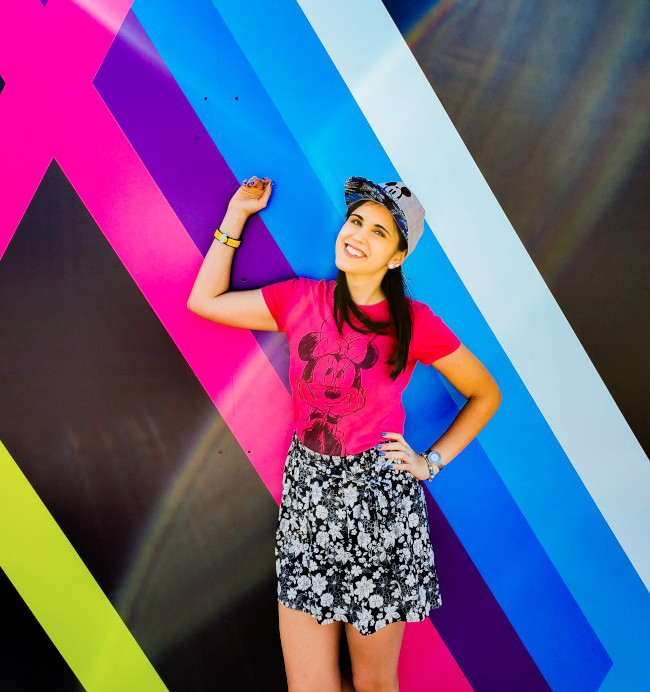 The Moss Wall in Animal Kingdom 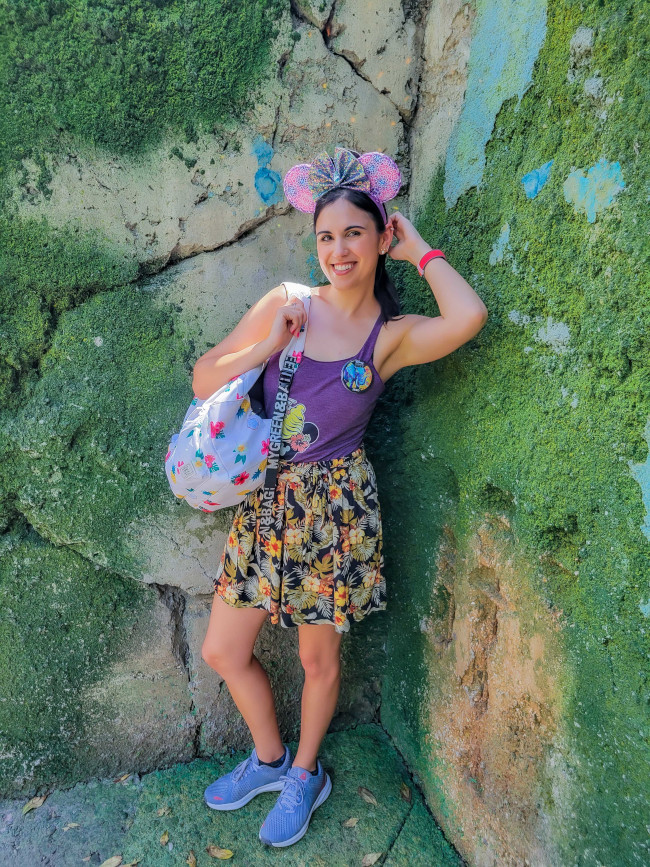 The “You Are Most Beautiful Wall” in Animal Kingdom

Where to find the “You Are Most Beautiful Wall” in Animal Kingdom: Stop by Harambe Market in Africa. Keep your eyes peeled for a Cast Members-only doorway to find this patch of wall. 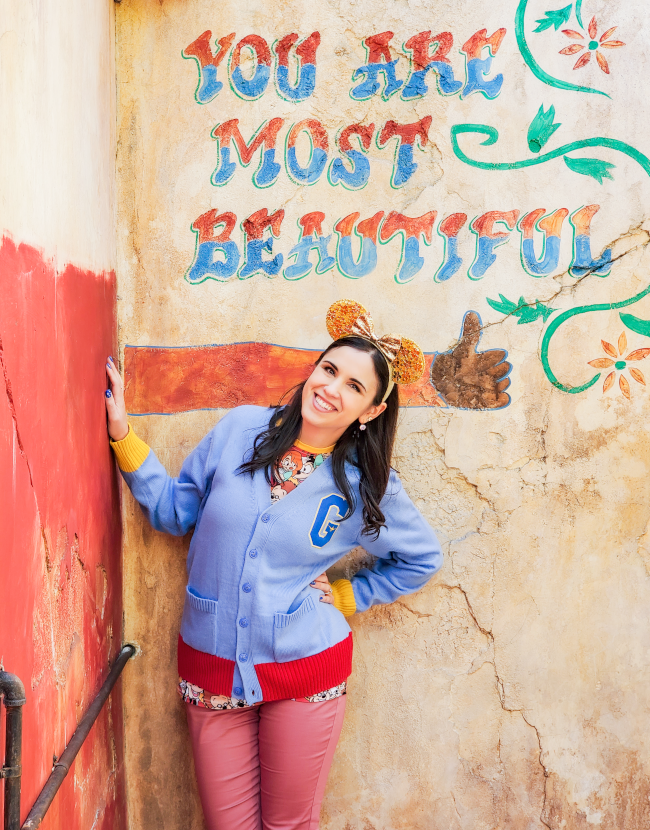 “You Are Most Beautiful” Wall. Photo courtesy of Disney Parks Blog

The Fichwa Wall in Animal Kingdom

Where to find the Fichwa Wall in Animal Kingdom: Speaking of Harambe Market, you’ll find several great walls here. The first is the Fichwa Wall, famous for the painting of Mickey Mouse. It’s easy to spot once you’re in the market. 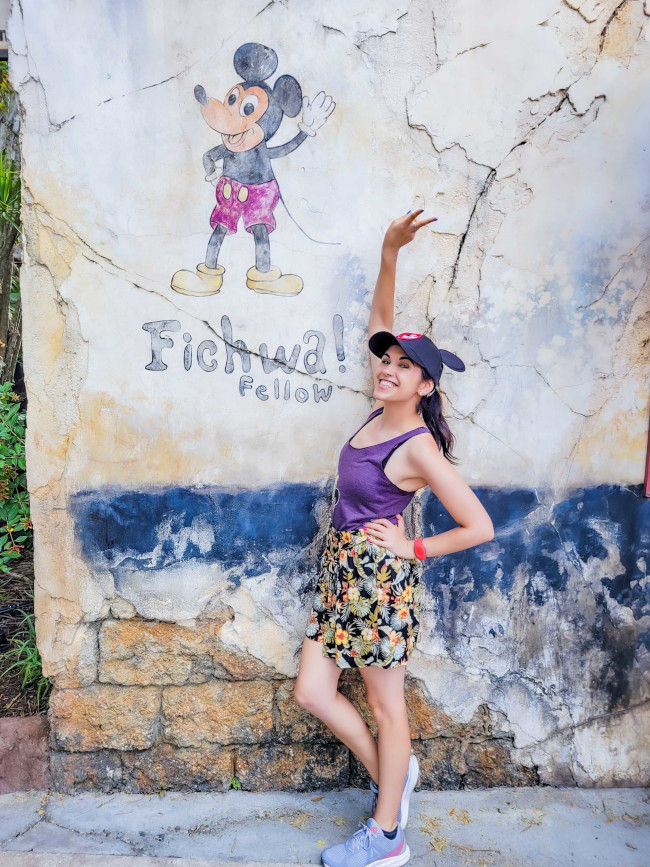 Where to find the Lion King Wall in Animal Kingdom: Not far from the Fichwa Wall is this Lion King wall that translates to “Can You Feel the Love Tonight?” 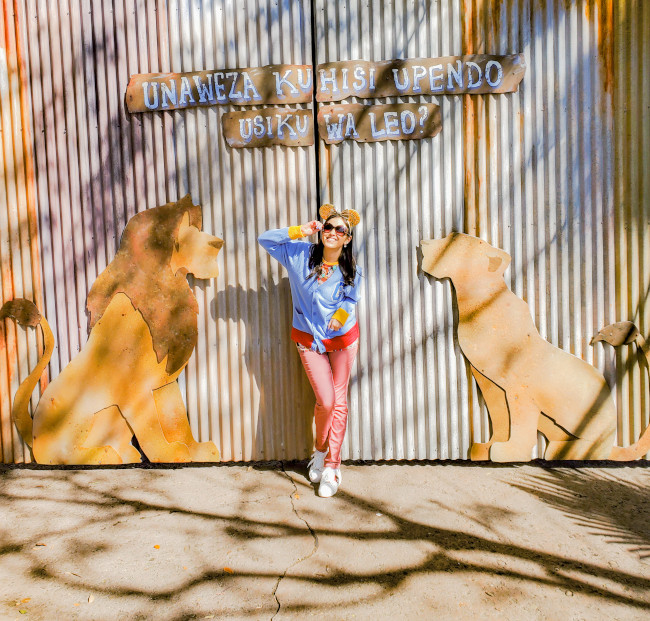 Where to find the Harambe Market Wall in Animal Kingdom: The second wall in Africa’s Harambe Market is also easy to spot. It has a nice yellow color and some bicycles. 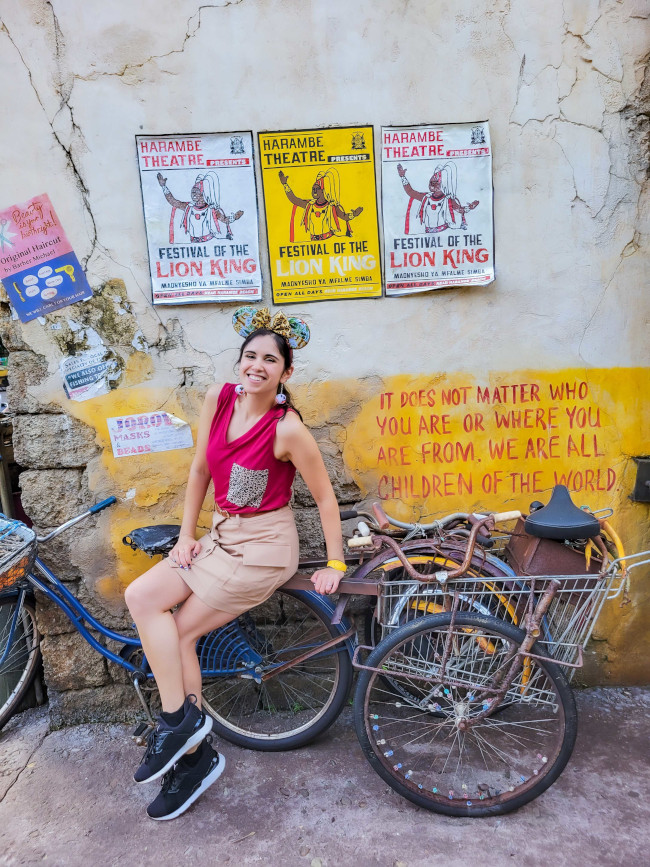 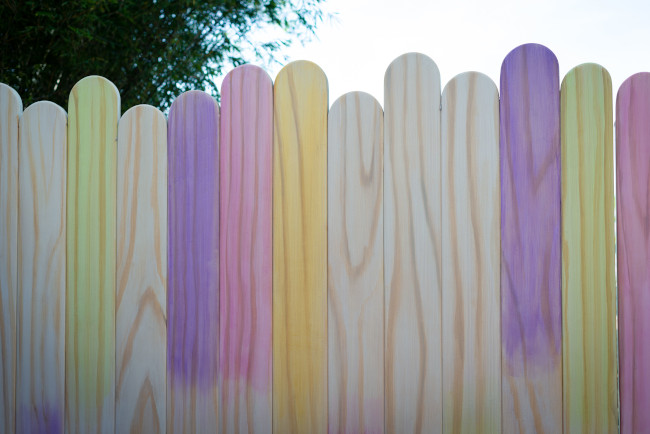 Head to Toy Story Land, take a ride on Toy Story Mania, and find the Popsicle Stick Wall as you exit.

Have you found the Purple Wall in Magic Kingdom? Share your favorite poses on our Facebook page.

Disney Castles Around the World: The History, Inspiration, and What’s Inside Them