What’s All The Buzz About Dole Whip Nachos? 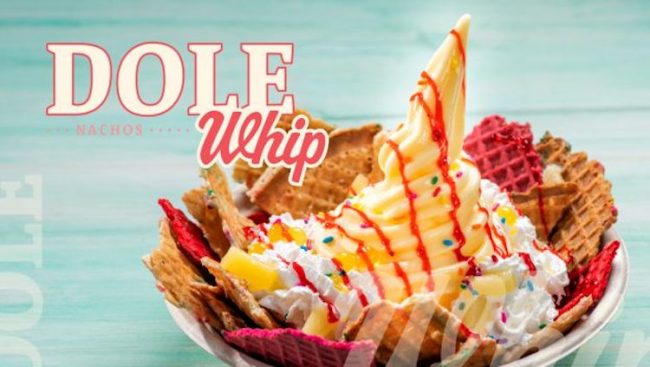 Dole Whip — Nachos? Did I just hear that correctly? Dole Whip Nachos are very much a real snack that you can purchase at Disney Springs in Walt Disney World. And, yes, they’re a big hit.

When I first heard the words “Dole Whip Nachos,” I may have grimaced. But, once I read the ingredients, I was pleasantly surprised. They actually sound really delicious.

Who knew the popular dairy-free pineapple frozen treat could be turned into a successful nacho snack? This isn’t your typical savory nacho dish, of course, but one that’s all about sweetness.

Dole Whip Nachos may sound like an odd concept, but I think it’s the name that throws people for a loop. It certainly did me. But, once you hear the ingredients, they sound pretty good.

The ingredients are both tasty separately and even more so when combined. They are:

See? It’s basically a sundae minus the ice cream. It does sound super sweet, so if that’s not your thing, you probably want to avoid them. But, if you’re up for something new, go for it!

Where Can You Get Them at Disney Springs?

You can find Dole Whip Nachos at Marketplace Snacks in Disney Springs, near the Marketplace Stage and Ghirardelli Soda Fountain & Chocolate Shop.

How Much Do They Cost?

Let’s face it, Disney isn’t cheap and I prefer to spend my money on something I know I’m going to enjoy and you might feel the same.

If you don’t mind spending $8.99 on a dessert you’ve never tried before, then Dole Whip Nachos are for you.

That’s really not that bad for a Disney snack, especially for the size of the nachos. It’s a pretty big bowl, and one you can share.

What Do People *Really* Think Of Them?

They’ve been taste tested and approved by many!

For example, Julie from sonshine.adventures tried the Dole Whip Nachos on May 30 and shared her experience on Instagram.

She, too, wasn’t quite sure about the concept, but she walked away happy.

“I’ll be honest… I was a little skeptical at first,” she wrote, before adding, “Dole Whip is already super sweet, but these were refreshingly delicious.”

And many others agree with Julie.

They sure are Instagram-worthy!

Apparently, the nachos taste as good as they look.

In the words of happilyevercici, “I am a LOVER of Dole Whip, and Strawberries are my favorite fruit. When you put them both together, they equal HEAVEN.”

Anyone else want to munch on that waffle cone all day long?

Per doctordisney, even those who aren’t Dole Whip fans will like these.

Who ever thought Dole Whip Nachos would become a Disney fan-favorite? I guess there’s no wrong way to eat Dole Whip.

Do you love learning about the latest Disney news and snacks? Subscribe to our newsletter to stay up to date!