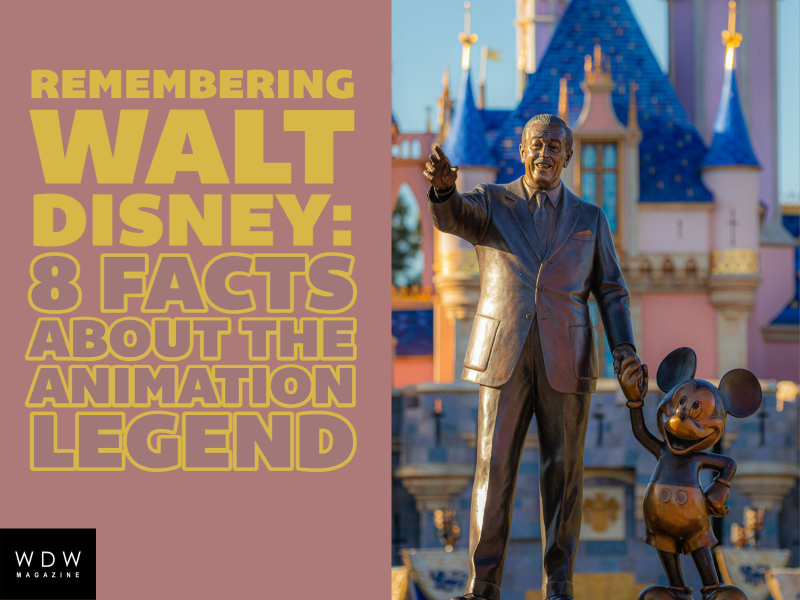 Brush up on your Walt Disney facts as we honor the legendary animator who brought us Mickey Mouse, Walt Disney World, and a lifetime of magic.

Animation wouldn’t be what it is today were it not for Walter Elias Disney (or Walt Disney, as we know him). The Chicago-born animator, theme park visionary, and business tycoon is responsible for making “the Most Magical Place on Earth,” as well as giving us the characters we grew up loving—and still do!

Born on December 5, 1901, Walt celebrates his 120th birthday today, December 5, 2021, and as much as we all know about the man, there’s still plenty of interesting Walt Disney facts that we continue to uncover.

To celebrate the life of the legend and look back on his numerous contributions, let’s check out these eight facts about Walt Disney. Chances are, you’ll learn something about him in this Disney trivia that you never knew before.

1. A Heart for Animals 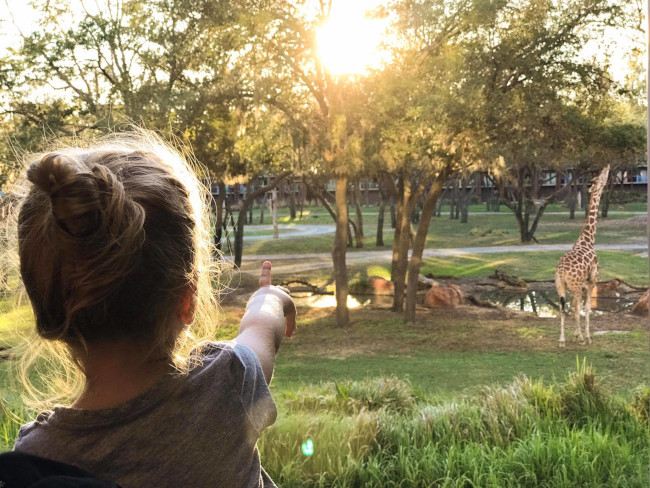 Even early in his career, Walt was known for the remarkable way he was able to bring animals to life on the page, giving them charming human characteristics. His anthropomorphic characters—including Mickey Mouse and the gang—are an homage to his love of animals.

Walt’s inclination toward depicting lovable creatures actually was facilitated by a tragic event in his young life. When he was seven years old, Walt had a run-in with an owl that resulted in its death.

Without going into the distressing details of the incident, suffice it to say that the encounter had a monumental impact on him. His remorse motivated him to have more tenderness toward animals and even humanize them in his drawings.

However, there was one animal of which Walt wasn’t too fond: cats. He was quoted as saying, “You can’t tell them what to do.” Anyone who’s lived with a finnicky feline can say that Walt is right about that! 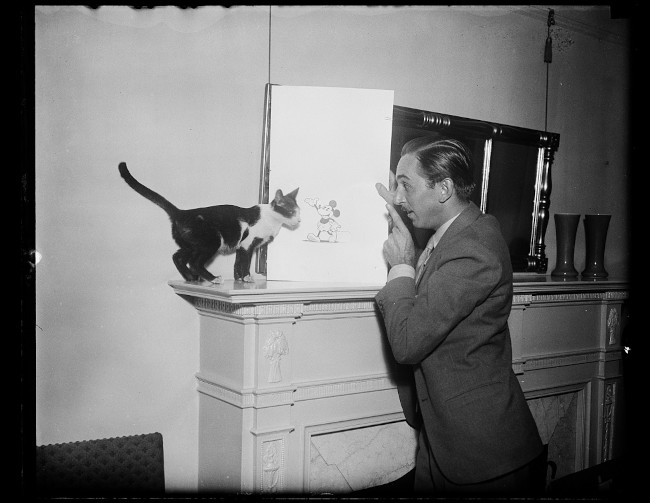 Are we sure Walt didn’t like cats that much? This picture says otherwise! Photo courtesy of the Library of Congress

Fun Walt Disney fact: Despite not being crazy about cats, one of Walt’s favorite characters from his films was Figaro from Pinocchio, which is why he decided to keep Figaro a staple of the Disneyverse as Minnie Mouse’s cat.

2. Why You Should Never Give Up 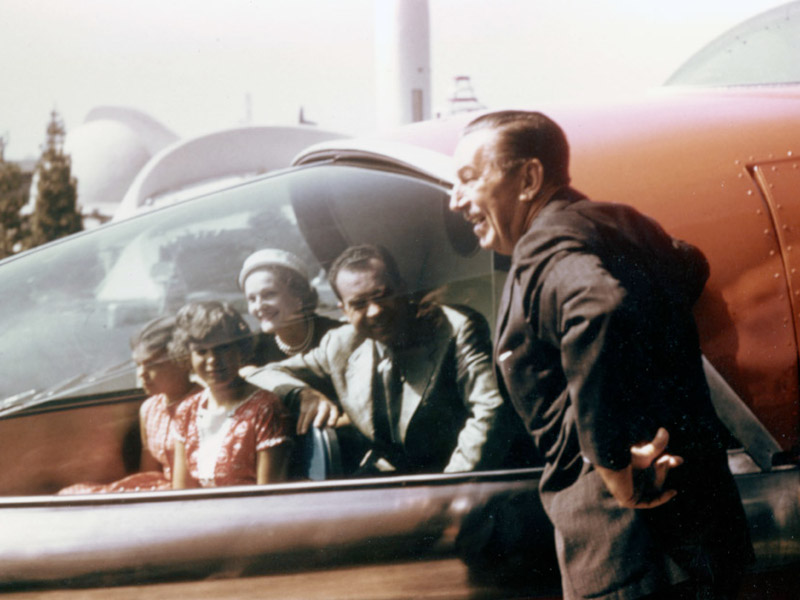 If Walt had given up, we would have never had this glorious opening day at Disneyland. Photo courtesy of Disney Parks Blog

If Walt had given up on his dreams the first times he encountered opposition, we wouldn’t have the movies and parks we cherish today.

Early in his career, Walt worked at The Kansas City Star, a newspaper still in circulation today. His employment began with the task of delivering papers, which he did for six years with his father.

He eventually applied for the role of a cartoonist, but that job didn’t last long. The story is that Walt was fired from his role because—according to the words of his editor—he “lacked imagination and had no good ideas.” 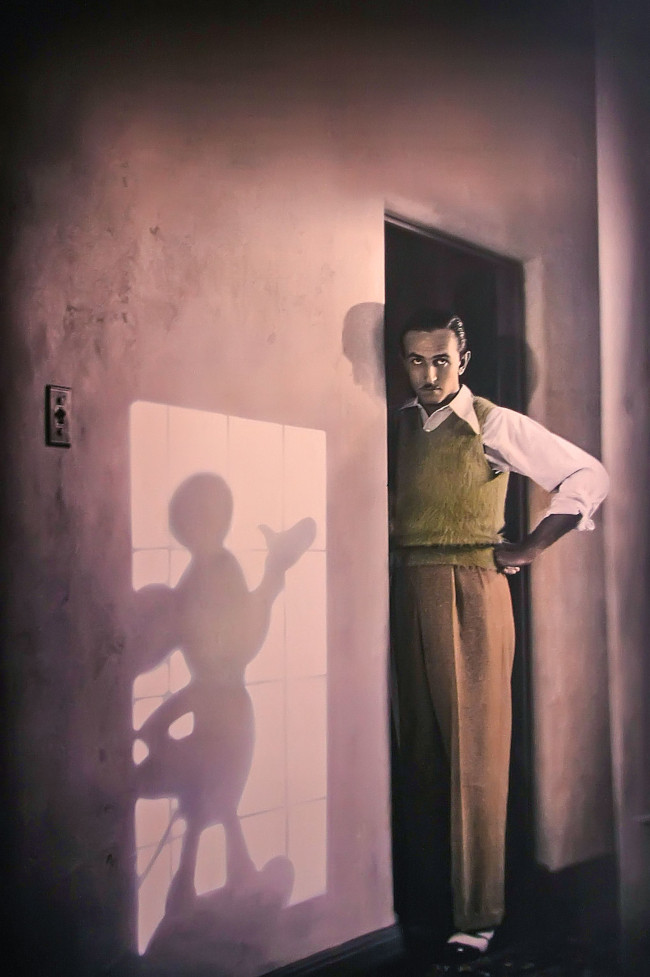 Does this look like a man with no good ideas? Photo courtesy of the Library of Congress

His following venture, Laugh-O-Gram Studios, went bankrupt, but Walt continued moving forward until he eventually found success in Hollywood. It’s a good thing he didn’t lose heart before then.

3. The Men Behind the Mouse 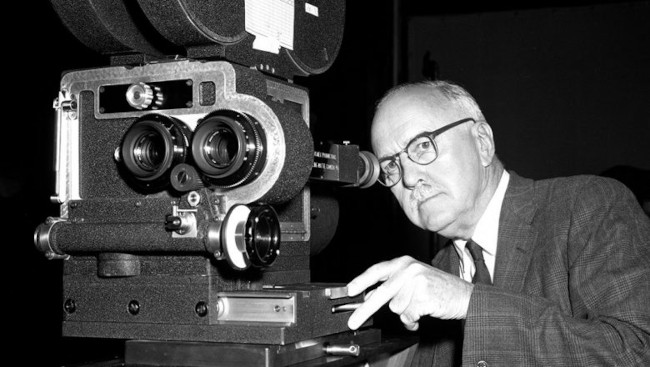 Most people attribute the creation of Mickey Mouse to Walt Disney, assuming the man associated with the mouse was the sole creator. They go hand in hand—literally, as they’ve famously depicted holding hands in the Partners statue at Magic Kingdom.

Although Walt did voice Mickey for almost 20 years and came up with the idea of the cartoon—wanting to name the character “Mortimer Mouse”—he was not the person who created Mickey’s official design. The rodent’s iconic look was first scribbled by Ub Iwerks, Walt’s chief animator. 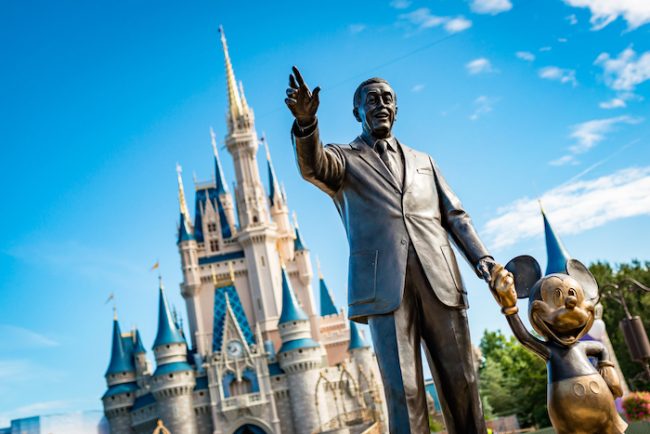 Ub became known in the studio as the go-to Mickey Mouse animator, though his skill for depicting the figure was eventually surpassed by his protégé Les Clark.

Still, the majority of credit goes to Walt for bringing the mouse to life, as he was awarded an honorary Oscar for the creation of Mickey Mouse by The Academy of Motion Picture Arts & Sciences in 1932.

4. That’s Not His Signature

This is perhaps the most shocking of all the Walt Disney facts we’ve yet to uncover. Brace yourselves …

Think back on those times when you watched the Walt Disney Pictures logo glow on your television screen as you replayed your favorite VHS tape of your favorite Disney animated classic for the umpteenth time. For many years, that castle—inspired by the real-life Neuschwanstein Castle in the German Alps—was accompanied by Walt Disney’s signature … or was it?

While you may assume that the handwritten script was the official autograph of Walt himself, it actually was a specially designed typography by one of the studio’s animators.

While the design was inspired by Walt’s actual signature, the final version was carefully refined for its marketability and visual recognition. I wonder if that means the capital letter D was purposefully made to look like a backwards G … 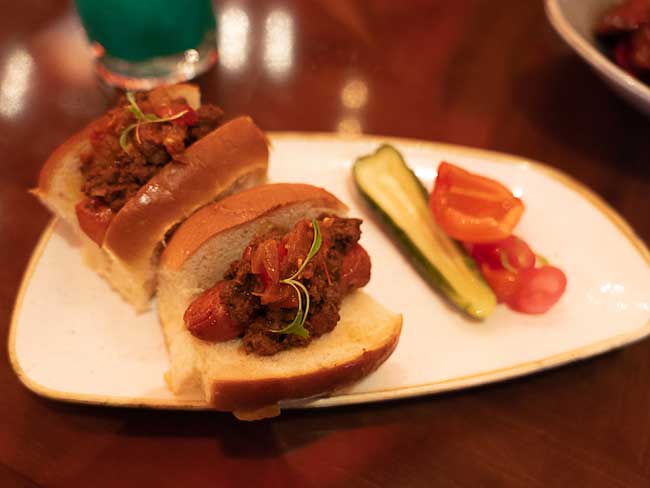 Even though his fame and success reached colossal heights during his lifetime, Walt still retained some of the down-to-earth preferences that he grew up with. That especially applied to his dining habits.

While many people would indulge in the finest cuisine were they ever to become as successful as Walt, the entertainment entrepreneur stuck with what he loved most: canned chili.

According to his family, Walt preferred simple chili over hifalutin dishes—to the extent that he often travelled with a supply of canned chili and asked chefs to warm it up for him.

It’s no surprise then that Walt’s famous chili plays such an integral role on the Walt Disney World 50th anniversary menus across the resort. 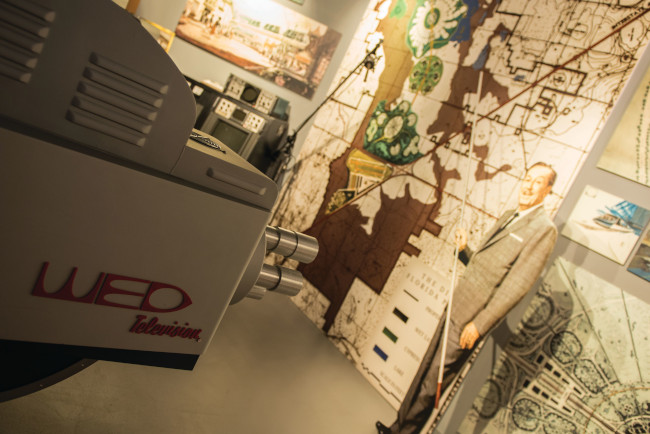 Walt was an ideas man. Photo by Cliff Wang

Walt wasn’t just an animation visionary or futurist; he also had a hand in developing some revolutionary technology.

The multiplane camera was revolutionary in propelling animation techniques to new heights—and depths. By using stacking multiple panes of drawings atop each other and focusing on certain levels, Walt was able to give flat-looking cartoons a visual perspective never seen before.

He developed this technique in many short films before using it in his first feature film, Snow White and the Seven Dwarfs. 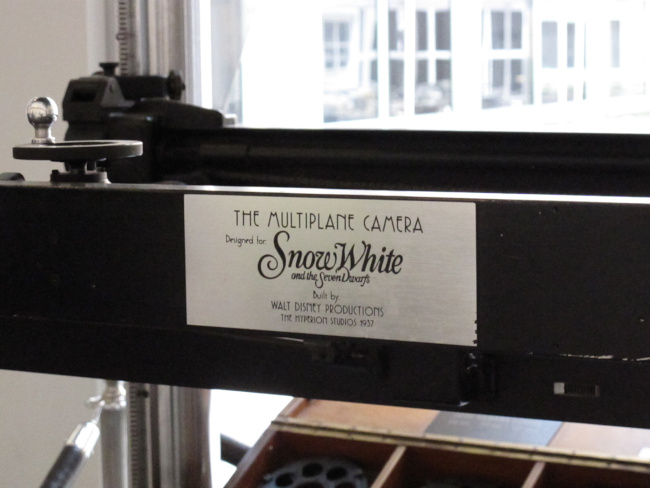 The multiplane camera was revolutionary in its time. Photo courtesy of Myrna Litt via Creative Commons

This may not sound like a big deal, but the multiplane camera was influential enough to earn Walt a place in the National Inventors Hall of Fame, as he was inducted posthumously in 2000.

The creation of the multiplane is one of our favorite Walt Disney facts. We’ll be exploring this technology in detail in our March 2022 issue on the Visual Arts. Start your annual subscription today to make sure you get your copy! 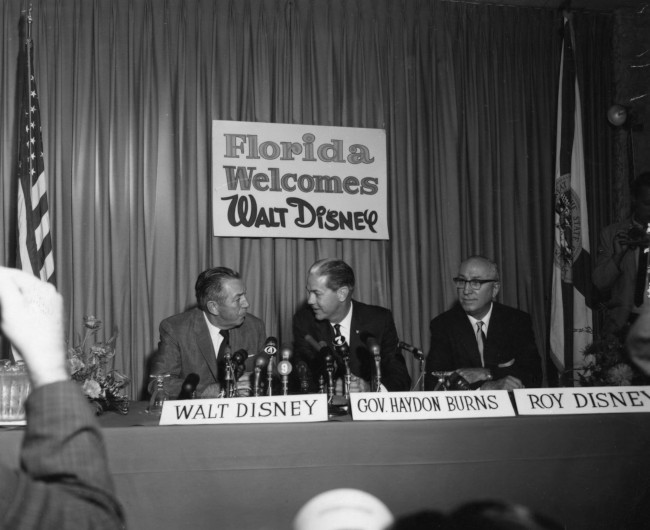 Walt was a true visionary. Photo courtesy of the Library of Congress

Another way that Walt applied his ability to envision new, creative technology and manifest it in real life was through his involvement in the New York World’s Fair. Running 1964 to 1965, this highly successful and noteworthy gathering of visionaries led to a flourishing of creative ideas.

Walt was heavily involved in the World’s Fair, and many of his contributions to the festival made their way to Florida where they became staples in EPCOT (the Carousel of Progress for the General Electric exhibit), Liberty Square (Great Moments with Mr. Lincoln for the Illinois exhibit), and Fantasyland (“it’s a small world” for Pepsi Cola). 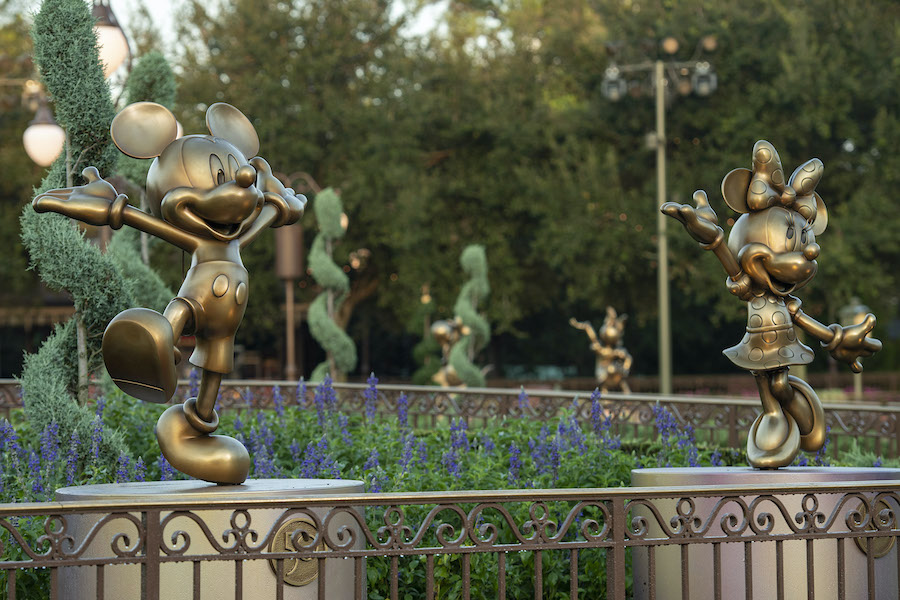 Long before these gold statues sprung up, Walt was collecting gold statues from the Academy Awards. Photo courtesy of Disney Parks Blog

Walt’s groundbreaking contributions to cinema clearly never went unnoticed by The Academy of Motion Picture Arts and Sciences. During his prolific career, Walt was attached to many projects at his animation studio, which resulted in many awards.

As of 2021, Walt is the current record-holder for the most Academy Awards, boasting an incredible 22 Oscar statues with his name on them. In total, he was nominated 59 times!

He also holds the record for the most Oscar nominations in a single year. Back in 1954, Walt won four out of six nominations due to his involvement in feature-length and short documentaries, as well as multiple nominations in various “Best Short Subject” categories.

In addition, Walt holds a record of earning the most consecutive awards: eight years straight bringing home at least one trophy from 1932 to 1939.

You need more than a big mantle to display all those awards; you need an entire room!

In honor of the 50th anniversary of Walt Disney World, Imagineers have hidden gold statues of iconic Disney characters across all four parks. Is this a nod to Walt’s trophy case of golden awards? 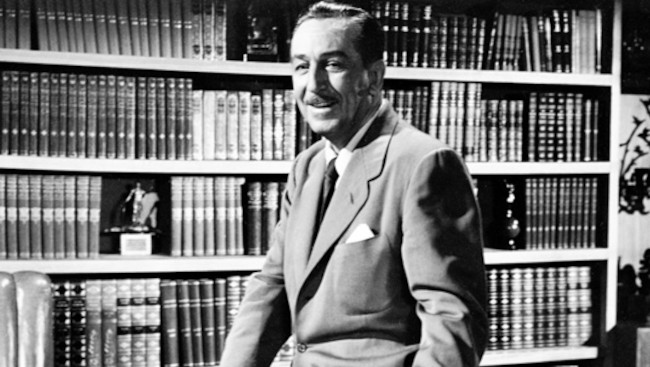 These Walt Disney facts barely scratch the surface of the iconic animator. You can spend weeks—nay, months—reading about Walt and still have so much to learn.

It’s hard to understate the impact that Walt has left in Western animation and how the American animation industry has been shaped by his contributions. The next time you visit Walt Disney World, consider how none of it would exist were it not for one man’s legacy.

What’s your favorite Mickey Mouse cartoon? One of mine has to be “Mickey’s Service Station” from 1935 because it combines my love of cars with classic Disney characters.