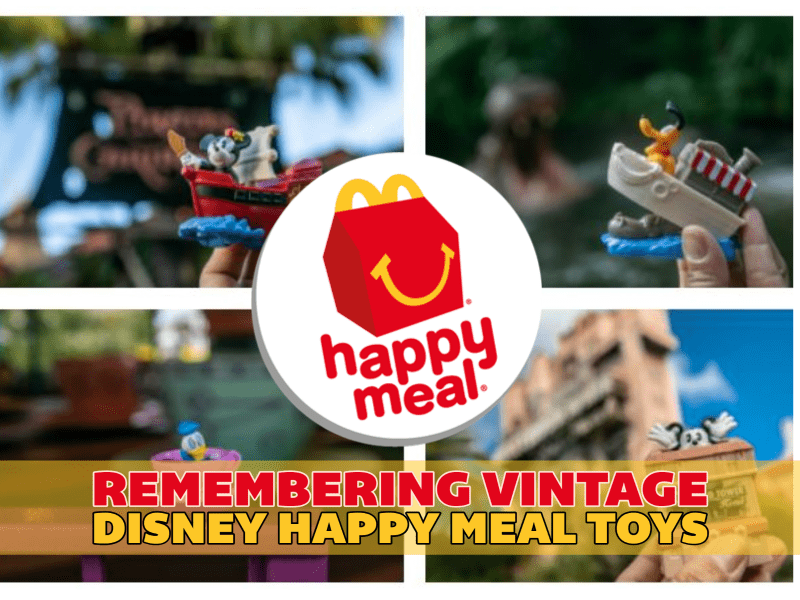 Feeling nostalgic? Grab a Big Mac and stroll with us down memory lane as we look at some of the best vintage McDonald’s toys from Disney films and parks.

McDonald’s, the world-renowned and much-beloved proprietor of burgers and so forth, recently announced a new line of Happy Meal toys to help celebrate Walt Disney World’s 50th Anniversary.

If you want to nab the whole set of 50 Disney Happy Meal toys, it’s going to cost you a pretty penny. Specifically, probably at least 2,000 pretty pennies. Or 2,000 dull pennies. I’m sure folks aren’t that picky about the shape of pennies. (But they’d probably prefer PayPal.)

Since we’ve been doing a lot of looking back at the history of WDW, it got us to thinking about those vintage McDonald’s Happy Meal Disney toys of yesteryear.

Our readers have a lot of questions about Disney Happy Meal toys—and we’ve got a lot of answers.

What Are the Oldest McDonald’s Happy Meal Toys? 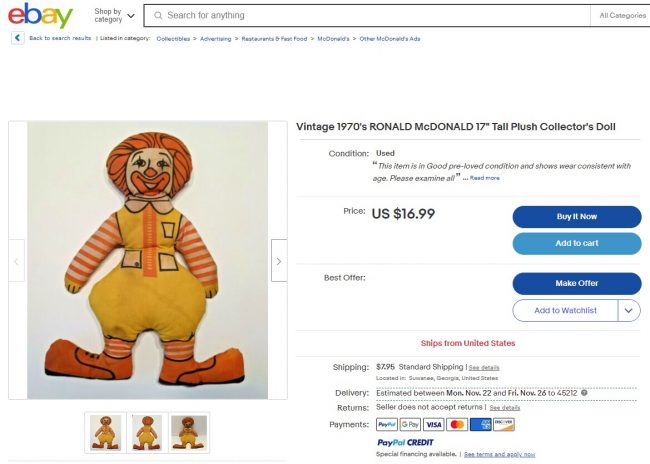 There’s only, like, a 45% chance this thing is haunted. Photo courtesy of eBay

McDonald’s has been around since 1940 and eventually became a global phenomenon after Ray Kroc purchased the chain in 1955. Kroc would push the chain in a new direction, adopting the Golden Arches logo and Ronald McDonald as a mascot.

Ronald McDonald and other mascots signaled the company’s focus on marketing to kids. Starting in 1970, McDonald’s began selling stuffed dolls based on characters like Ronald McDonald.

You can still find these vintage dolls on eBay in good shape for fairly reasonable prices. These vintage McDonald’s toys laid the foundation for the launch of Happy Meals in 1979.

What Were the First McDonald’s Happy Meals? 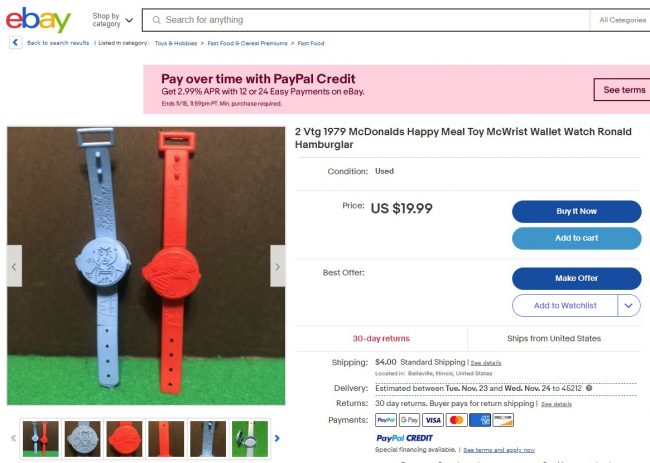 We’ve come a long way from simple times these past 40+ years. Photo courtesy of eBay

The idea for Happy Meals came from Dick Brams, who had the idea of offering special meals for kids with a toy included.

The first McDonald’s Happy Meals were little McDonald’s-branded trinkets with unique names. You had options like the McWrist, which were brightly colored wrist wallets for storing coins and small items.

That same year, McDonald’s offered Happy Meal toys from Star Trek: The Motion Picture, marking the first of many, many movie tie-ins.

What Were the First Disney Happy Meal Toys at McDonald’s?

Of course, it didn’t take long for McDonald’s to link up with Disney to put more smiles on the faces of kids.

The first Disney property to get a Happy Meal toy at McDonald’s was The Fox and the Hound in 1981. This was then followed by toys based on The Rescuers in 1983.

Happy Meal toys for these two movies seem very, very difficult to come by. If you happen to have these vintage McDonald’s topys in your collection, they could be worth a good chunk of change if they’re in good shape.

From 1987 on, McDonald’s and Disney teamed up to create Happy Meal toys based on tons of beloved movies and shows.

Some of the Best Vintage McDonald’s Toys for Disney Fans 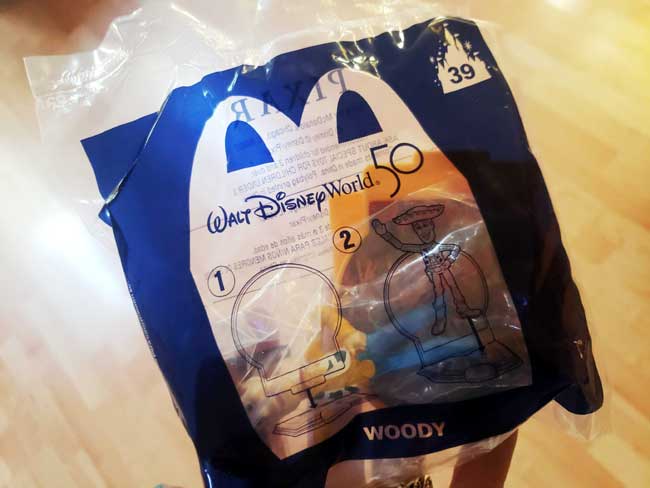 If you were a kid at some point in the last 30 or 40 years, then you’ve probably got some kind of fond memory of getting a McDonald’s Happy Meal. Even if you can’t remember the meal, you definitely recall the happy feeling of getting a cool toy.

And McDonald’s and Disney’s partnerships over the years have resulted in lots of cool vintage Happy Meal toys. These are some of the best that you can still find if you scour eBay or other second-hand sites. 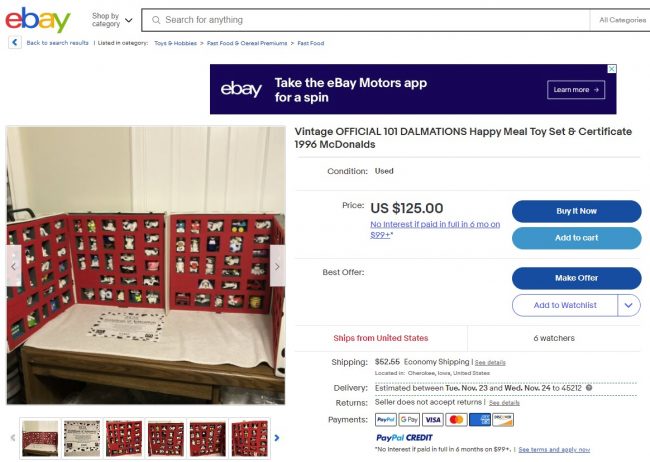 Yes, the front of the case is dalmatian print. Photo courtesy of eBay

Think 50 toys for WDW’s 50th anniversary is a lot? How does 101 Happy Meal toys sound? That’s exactly what you could get in 1996 with a complete set of 101 Dalmatian Happy Meal toys.

If you were lucky enough to purchase the entire set of 101 Dalmatians Happy Meal toys from McDonald’s, you’d also get a collectible case with a certificate of (paw)thenticity.

One listing on eBay has the full set of these vintage McDonald’s toys going for $125 plus a little over $50 for shipping. All told, that breaks down to about $1.75 per toy—which isn’t too bad!

Ready to be hit in all the nostalgic feels? Check out this commercial from 1995 (you know, more than 25 years ago) advertising Toy Story Happy Meal toys, including Woody, Buzz, Bo Peep, and Rex. 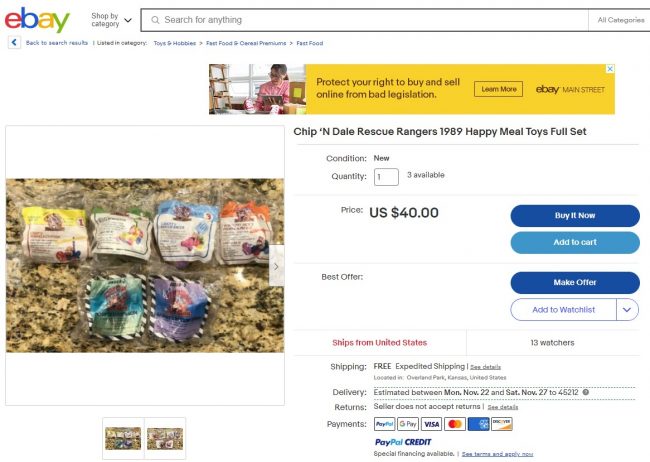 It’s not shocking that you’d be feeling nostalgic for Rescue Rangers these days. After all, Disney+ Day revealed that we’re getting a new Chip ’n Dale Original Movie starring John Mulaney and Andy Samberg.

If you want to get all amped up for the premiere of Chip ‘n’ Dale’s big comeback, you can scoop up vintage McDonald’s Happy Meal toys from the classic series pretty easily.

A full set of 1989 Chip ’n Dale: Rescue Rangers Happy Meal toys in the original plastic baggies might run you less than $50. If you don’t mind just having the toys, you might even pay under $20. 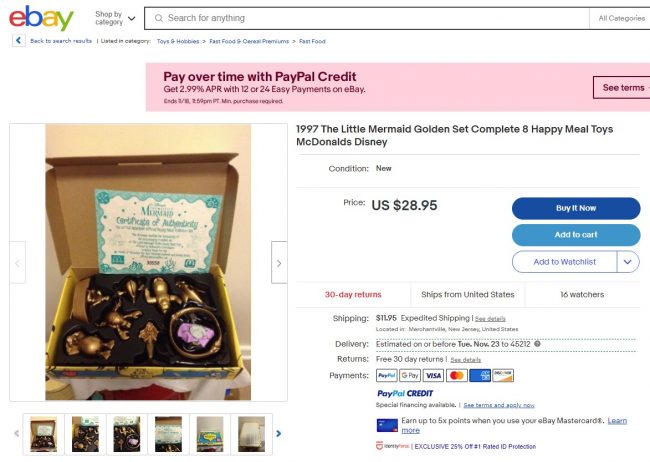 You don’t have to go under the sea to get a complete gold set. Photo courtesy of eBay

The Little Mermaid is one of the Disney movies that was so popular as a Happy Meal that it warranted a re-release. McDonald’s put out Happy Meal toys for the film during its release in 1989 and brought Ariel and the gang back again in 1997 as part of a golden collector’s set.

You can find the OG toys from 1989 as well as the complete golden collector’s set with CoA on eBay at a range of affordable prices. 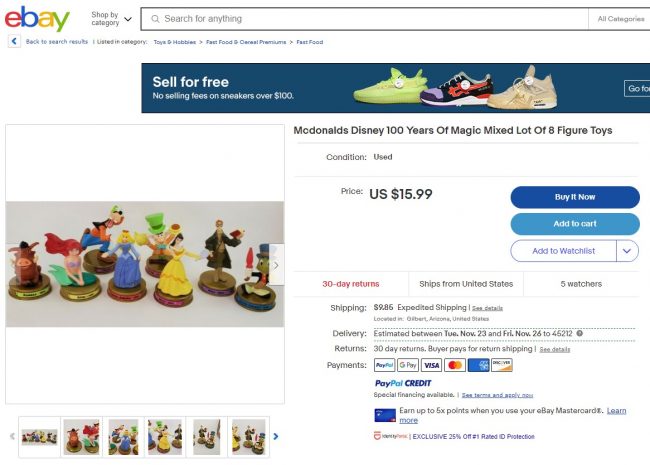 Not the full set of 100 vintage McDonald’s toys from this collection, but a nice chunk for a nice price. Photo courtesy of eBay

Back in 2001, Disney celebrated the 100th birthday of its founder and namesake, Walt Disney. To mark the occasion, McDonald’s offered a run of 100 Disney Happy Meal toys.

This set included a who’s who of classic and modern characters. From Steamboat Willie to Bambi to characters from Toy Story 2, there was something for every Disney fan in this set.

While the whole shebang looks to be pretty hard to come by, you can find individual and small lots of figures on eBay and around the web. 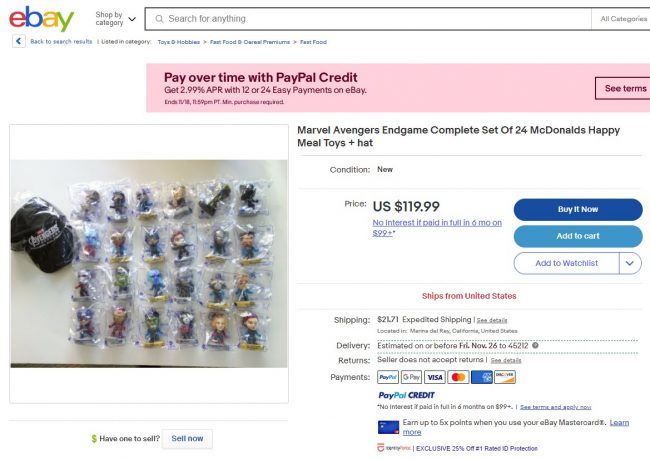 You can get this whole set of Happy Meal toys in a snap. Photo courtesy of eBay

Avengers: Endgame was the cinematic event for a generation—so of course it had its own Happy Meal. McDonald’s offered up a set of 24 characters from the thrilling conclusion to Phase 3 of the Marvel Cinematic Universe.

If you want to assemble your own team of Avengers, you can find complete sets of the Happy Meal toys on eBay for around $120-$150.

McDonald’s and Disney are still going strong thanks to the recent WDW 50th anniversary set and new Happy Meal toys for Eternals. And you can expect things to keep on rolling into 2022.

For all the latest on cool new Disney merch, McDonald’s and otherwise, keep your eyes on WDW Magazine.

Have a favorite vintage or modern Disney Happy Meal toy from McDonald’s? Head on over to the WDW Magazine Facebook page and tell us all about your favorite memories of popping open that iconic box and pulling out a rad toy.

How Much Are the 50 McDonald’s Disney Happy Meal Toys Worth?