6 Villain Disneybound Ideas to Inspire you this October 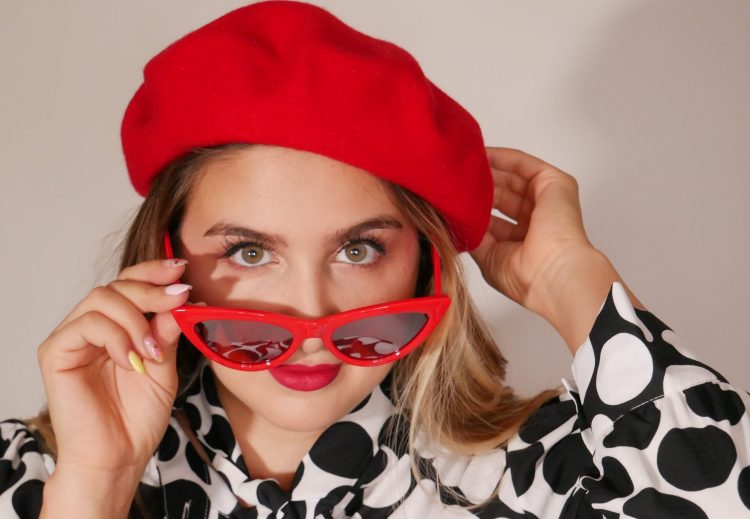 It’s spooky season and you know what that means! Not only do happy haunts come out to socialize, but October is the one month out of the year where the villains get to step in the spotlight. Truthfully, I find it difficult to wear Disney inspired looks outside of the Disney bubble. People just don’t understand me *crying teenage girl voice*.

DisneyBounding is perfect for Disney fans who want a little Disney magic in their everyday lives without having to wear their new Arendelle Aqua Ears to work. I put together these villain DisneyBounds that are perfect to wear inside or outside of Walt Disney World.

Color blocking is the key to a successful Disney Bound. Just pick pieces for your outfit that match the same colors of the character you’re trying to Bound as. In honor of the stars of Spooky Season, I have put together ghoulishly glamorous Disney Villain looks to wear this season, even at the office!

Building a cruelty-free Cruella DisneyBound is unbelievably easy. Thanks to vegan leather and faux fur, no animal has to be harmed in the making of your #OOTD.  A cruelty-free #OOTD is sure to make you look and feel good. Cruella color blocking is simple—black, red and adding lots of dots! 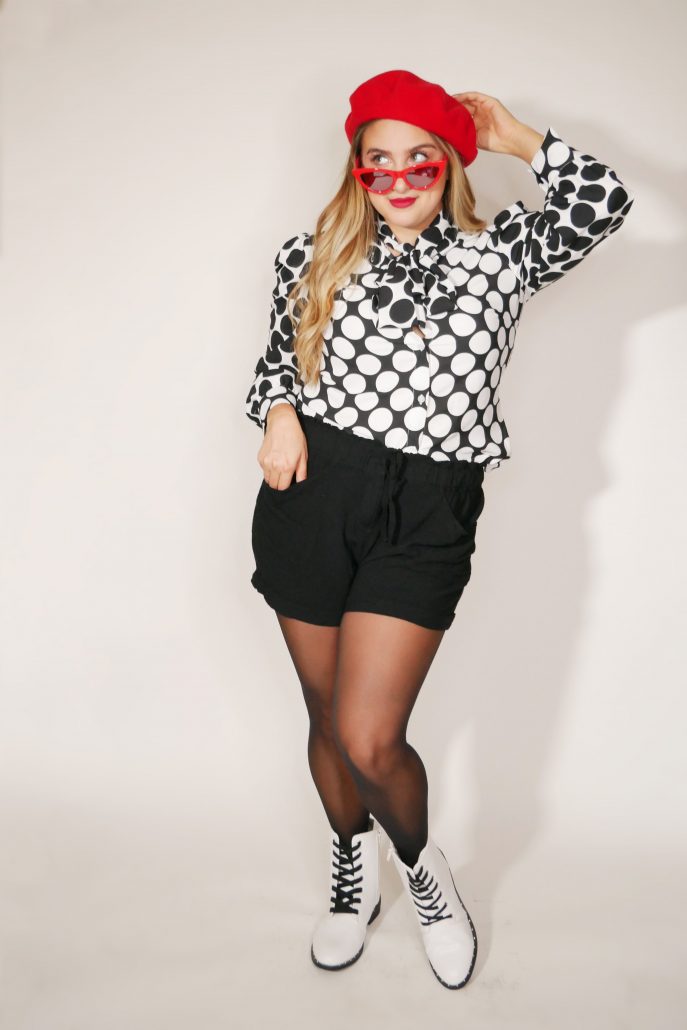 The ice in her stare… Photo courtesy of Heather Alvarez

I love the look of a beret, but I find them hard to wear sometimes. Although her style is at the expense of dead animals, Cruella is glamorous, whether you want to admit it or not, she’s stylin’. Whenever I scroll Pinterest or Instagram it is always the overly glam girls who can rock a beret, which is why I added the hat to this look!

James Woods, the voice of Hades, was inspired by the old friends he had in Rhode Island that he described as “slick” and “petty gangsters”. He brought these characteristics to the role, and instead of voicing Hades as a monstrous devil, he approached the character with a conniving, sadistic salesman tone. If you notice… Hades is a little too cool and laid back but at the same time, he is intimidating and menacing. 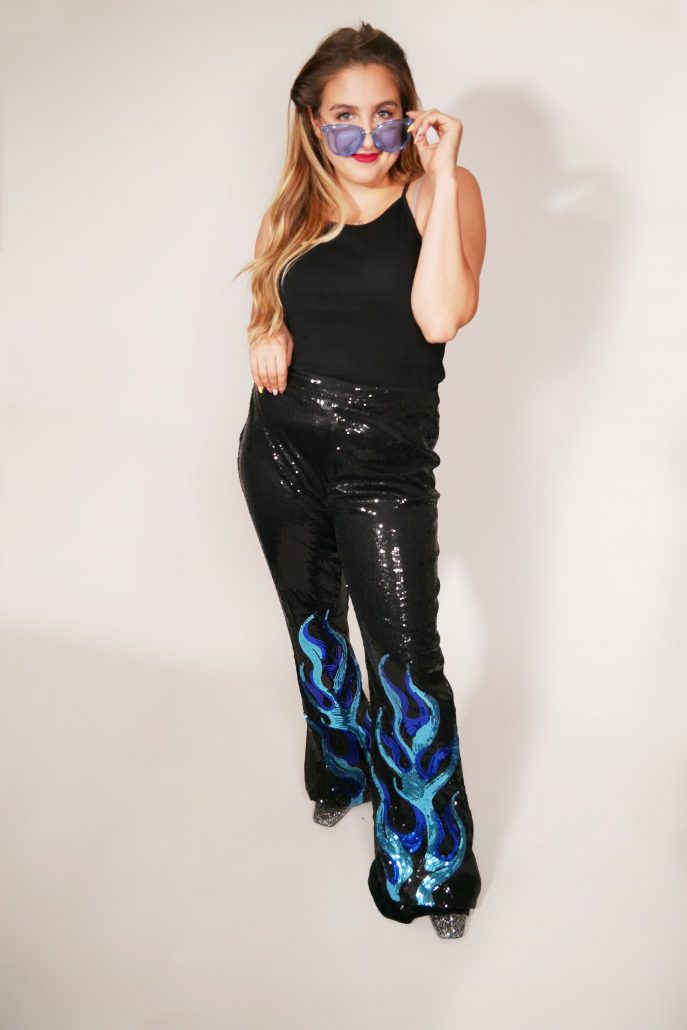 Hades is my favorite villain. Putting together this look was really fun. The pants have the perfect blue flame, and the sparkle of it adds just a little more attitude to the whole look.  I’d say the best color blocking for Hades would be blue, black, grey/silver, and even gold (for The Fate’s scissors). 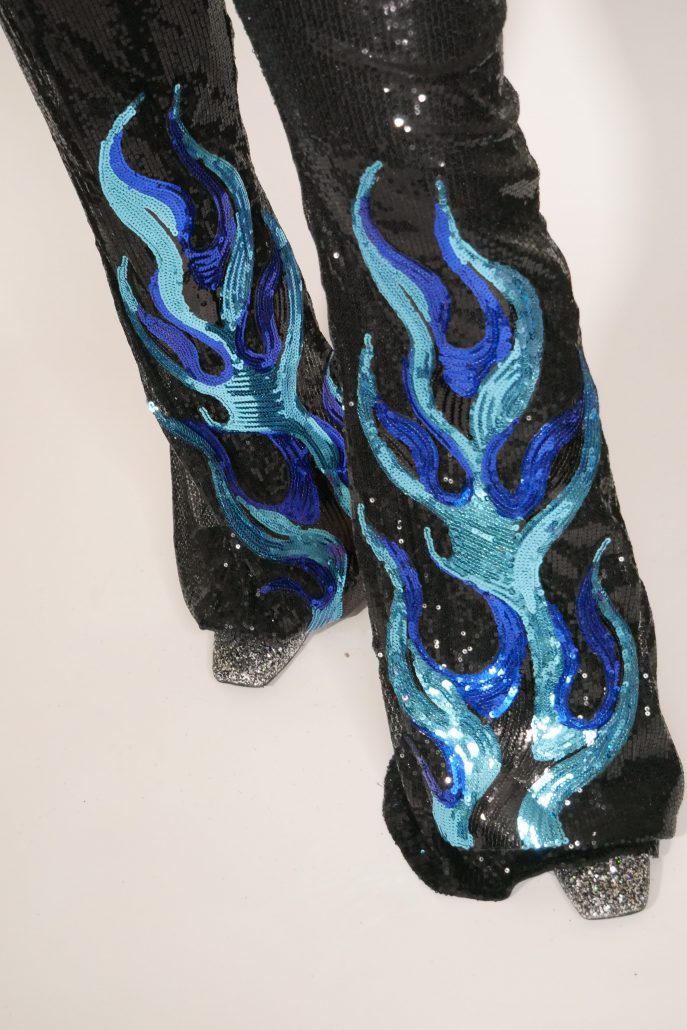 These devilishly cool pants are perfect for Hades! Photo courtesy of Heather Alvarez

Paying honor to the mistress of evil was difficult because I wanted this DisneyBound to be perfectly evil in every way.

For Maleficent you have two options when putting together a Disney Bound. You can use Maleficent’s color blocking from the original film, which is purple, green and black, OR all black everything like Angelina Jolie’s version of the mistress of evil. I chose to pull inspiration from the Queen herself, Ms. Jolie. 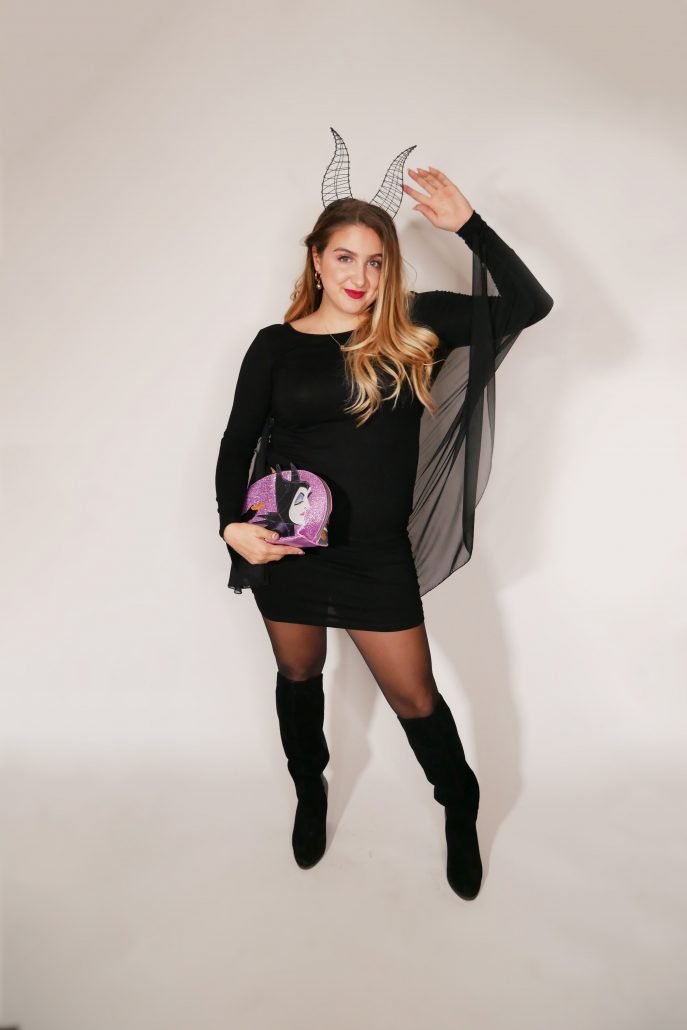 This bewitching sea Queen was actually designed after another kind of Queen. Divine was a Drag Queen known for her voluminous, stark white, spiked hair; voluptuous body and deep red lips and overarched brows. Sound like anyone we know? Ursula was inspired by Divine’s look, and it totally works. 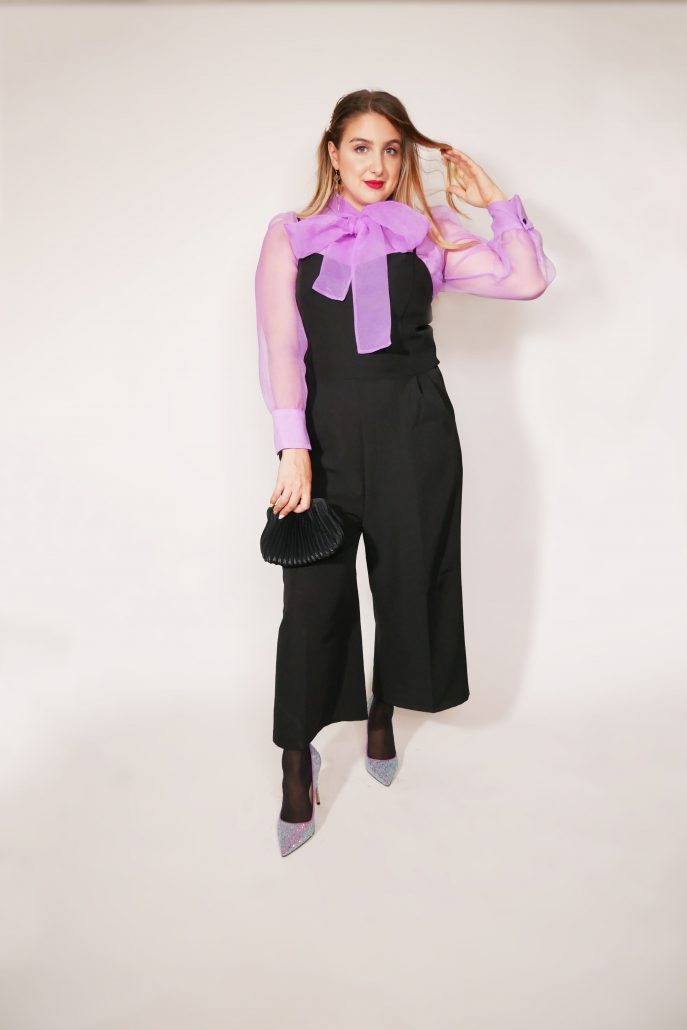 “They weren’t kidding when they called me, well, a witch.” Photo courtesy of Heather Alvarez

I love this blouse I found at Zara. It has the perfect movement to it, where the flow of the material can almost look like Ursula’s tentacles. I had to add some kind of gold shell because that’s where she stores Ariel’s voice. 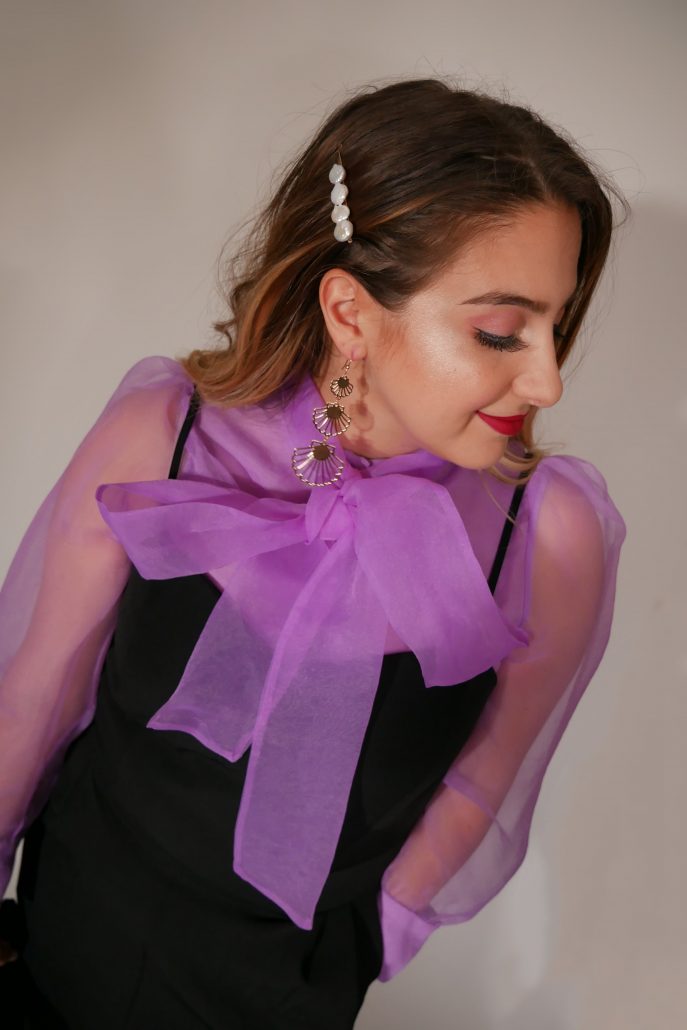 These shells are a perfect addition to this villain Disneybound! Photo courtesy of Heather Alvarez

I was able to find these earrings at Forever 21 and they bring the whole look back to Ursula’s origin – the ocean!

The Evil Queen is by far the most misunderstood villain— she just didn’t want to be upstaged by a younger woman… who can blame her for that? I find her to be the most calculated and composed villain—which is saying something. She is regal through-and-through and emulates a certain fierceness that I adore. 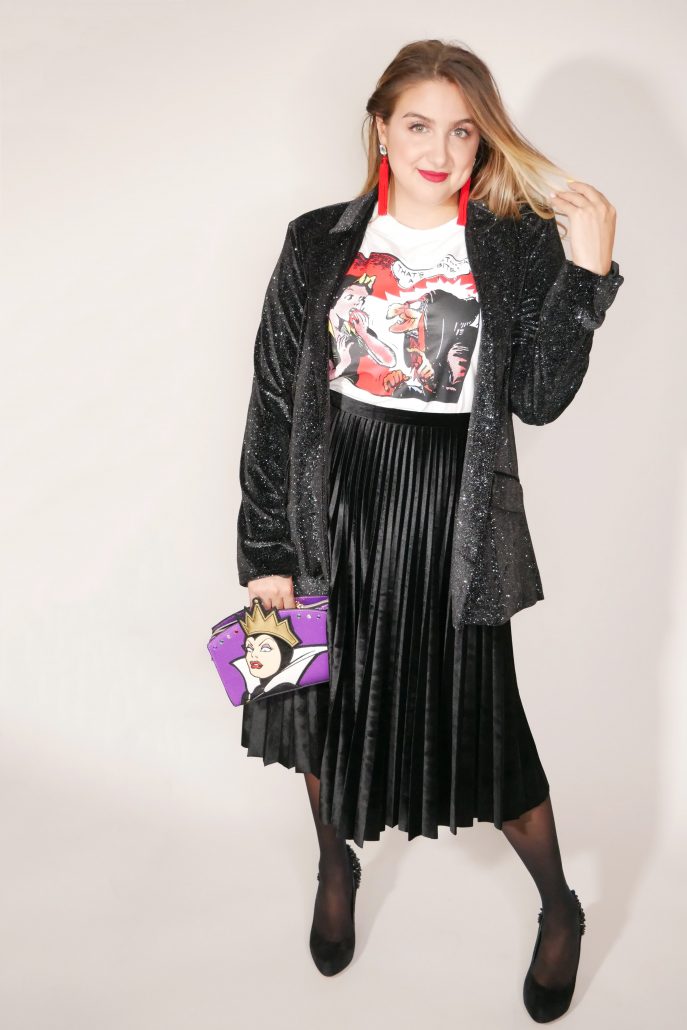 “Who is the fairest one of all?” Photo courtesy of Heather Alvarez

A red lip was a no brainer, but I felt a lot of pressure when piecing this look together. I added the power blazer to express her fierceness and “Boss Lady” attitude.

This duo is one of my favorite best friend DisneyBounds out there! For MNSSHP in 2018, me and Sam (MY BFFFFFFF!) went as a chic, prep-school version of the sisters. 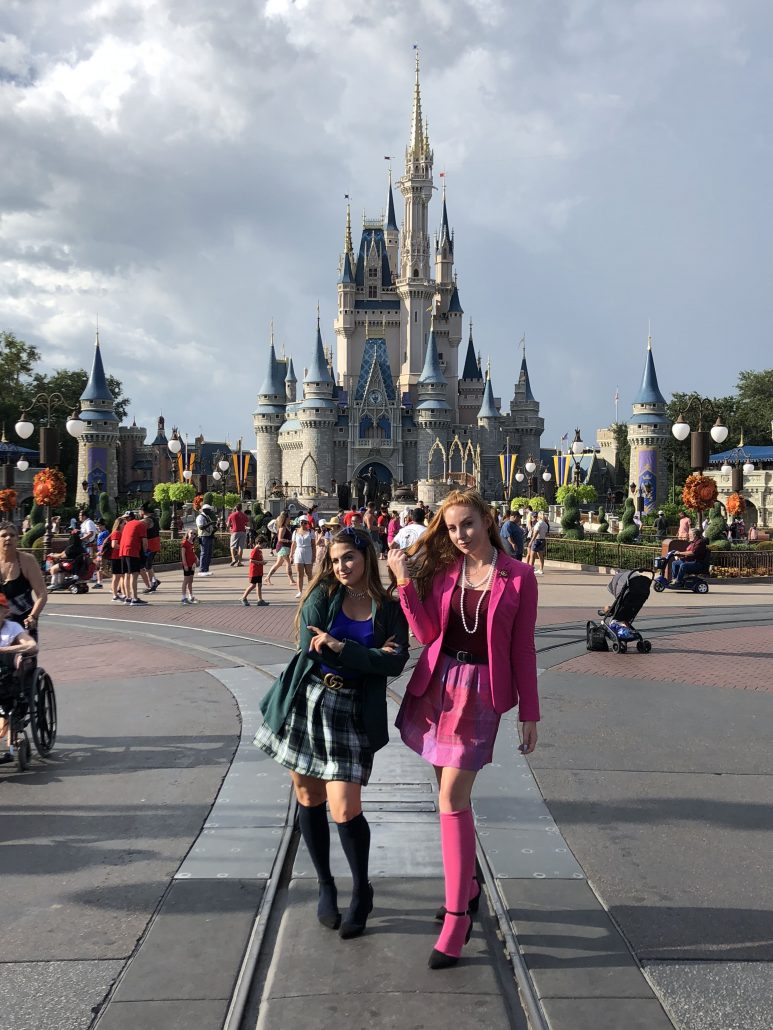 Here is our prep school rendition of The Stepsisters! Photo Courtesy of @sammiemaybe

The stepsisters are notoriously known as divas—so the more embellished and eccentric the pieces when DisneyBounding these girls the better.

Do you love all things that are Disney and Halloween? There’s always room for one more… Click here to subscribe to WDW Magazine. We cover Disney style every month, and are showing off some pretty creepy ideas this October.