VIDEO: All the Christmas Cavalcades at Magic Kingdom and Viewing Tips 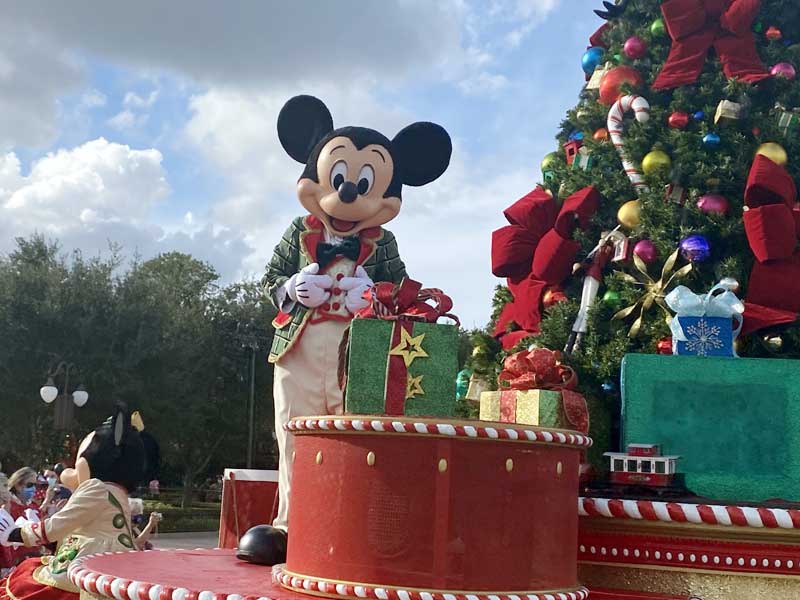 We are ringing in the Christmas cavalcades taking over Magic Kingdom now through the end of December.

Confirmed recently by Disney Parks, these magical cavalcades are your chance to wave to Mickey and his pals, all in holiday attire. To help you plan which Christmas cavalcades to prioritize, we’re listing out the character appearing in each group.

The Mickey & Friends cavalcade is a great way to see a bunch of Disney characters in just a few minutes. They are all dressed in very traditional Christmas attire—think A Christmas Carol.

Expect to see these characters in this Christmas cavalcade:

This float features lots of characters walking up front, including:

Mickey and Minnie ride on a Christmas tree float adorned with presents and a working model train set.

Behind them, walking characters can include:

The Disney Princesses are all about a bright, frosty Christmas! In their cavalcade, expect to see the princesses in their winter best. You’ll see long ballgowns, lots of velvet, and they’ve decked the halls with white garland and a pop of colorful ornaments.

Expect to see these Characters in this Christmas Cavalcade:

A gazebo float with Tiana and Belle

The mirror castle float is back! Here you can wave to:

Be advised: Some princesses are only visible on one side of the mirror castle float.

Royal attendants walk between the floats.

We love the Christmas treats at Disney World, so you know this was among our favorites.

Expect to see these friends having a sweet time in this Christmas Cavalcade:

Max in a gingerbread car

Behind him walk jolly gingerbread men and candy dancers

TIP: This is a short cavalcade that can be viewed quickly on your way to your next ride!

The Walt Disney World (WDW) band marches along the parade route with the striking Toy Soldiers.

Expect to dance! This Christmas Cavalcade is all about marching to the beat.

Toy Soldiers lead the way. These guys are an iconic part of Mickey’s Very Merry Christmas Party and the Christmas Day Parade, so it’s a real treat to see them marching by during the day!

The Main Street Philharmonic band is always a welcome sight on Main Street. They don’t have a lot of Christmas going on in their outfits, but with red and white uniforms, they’re all set!

Say hello and ho, ho, ho to Santa Claus as he waves to park guests from his sleigh.

You can probably guess, but here’s who to expect in this Christmas Cavalcade:

Prancer, Dancer, and all the other reindeer lead the way… of course! They have their paws up and are bopping to the music.

Santa isn’t far behind, on a grand sleigh float to carry him through the park. His ho-ho-ho is called out as he waves to all the good boys and girls.

Behind Santa, the cavalcade is finished off by Santa’s elves dancing merrily with big Christmas presents.

TIP: If Santa is a must-see for your kids, keep an ear out for the song playing in the video above. It will tell you when this particular cavalcade is coming!

HOW TO SEE THEM 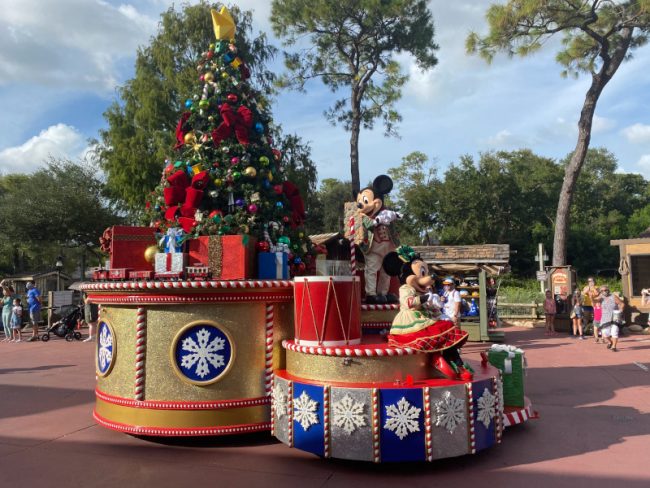 Cavalcades differ from parades in the sense that they don’t run at specific times. Due to health and safety reasons, cavalcades can be seen at random times throughout the day in order to prevent guests from gathering.

Take note that sometimes not all cavalcades run every single day at Magic Kingdom, so you might not get to see them all during your visit.

Here are a few tips to make certain you see at least some of the cavalcades:

Parades are definitely great, but there are many perks to cavalcades, like being able to see more characters throughout the day compared to normal.

They’re also quick, meaning you can simply stop, watch, and get on with your day in a matter of five minutes. No need to wait for hours to snag a good seat!

Even more so, the Magic Kingdom holiday cavalcades include characters, like the Toy Soldiers, Gingerbread Men, and Reindeer, that are usually exclusive to Mickey’s Very Merry Christmas Party, which was canceled this year.

These cavalcades are definitely a great addition to Christmas at Magic Kingdom!

Enjoying our coverage of the holidays at Walt Disney World? Consider signing up for our newsletter, so you never miss a beat, and head over to our Facebook page to tell us which Cavalcade you’re most excited to see at Disney World!