VIDEO: All the Festive Flotillas at Animal Kingdom and Tips to See Them 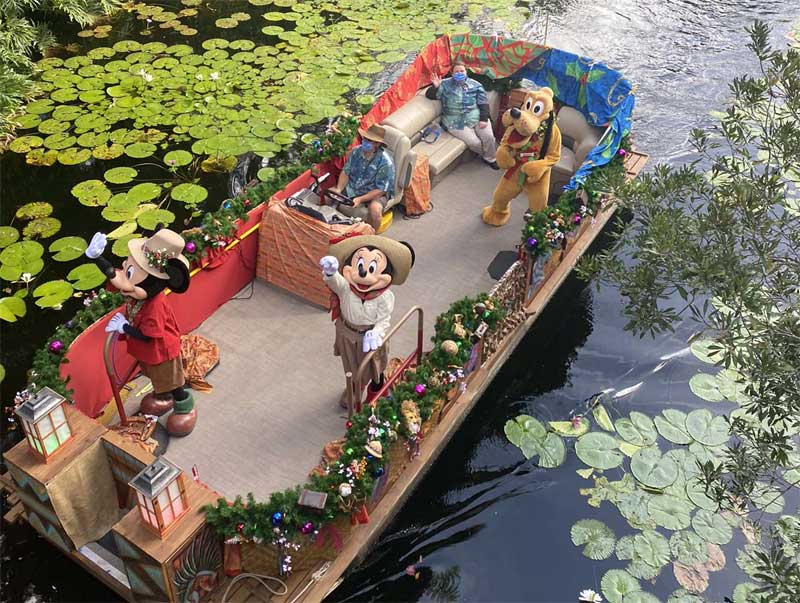 Watch all the festive flotillas and even see Santa Claus as they float around Animal Kingdom!

Last year was the first time Animal Kingdom fully got into the holiday spirit and it continues into 2020!

Confirmed recently by Disney Parks, here are several festive flotillas (plus Santa Claus) for guests to wave to as they travel by boat on the Discovery River.

Expect to see the following characters on this ship:

And of course, we can’t forget the Cast Members driving the boat and helping our friends! Be sure to yell a “happy holidays” at them, too!

Donald’s Dino Land Bash is a crowd favorite of Dino Land U.S.A. at Animal Kingdom. This addition would let guests meet up with Donald and his friends in all their dinosaur party attire. Ducks are their descendants, of course!

And while, Goofy, Chip, and Dale can’t claim dinosaurs as their ancestors, they love to dress up as chipmunkasauruses and party all day long!

Expect to see these characters on this flotilla:

Catch them on a flotilla partying their way through Animal Kingdom!

We love to see Donald and friends in their regal Dino Land outfits having a great time during the holidays!

Expect to see the following characters on this flotilla:

TIP: The version above shows just Daisy and Donald. Your experience could include just these two, or a version with either Launchpad McQuack or Scrooge McDuck.

If you’ve already seen this flotilla and hear it coming again, keep your eyes peeled… you just might see one of the ducks that weren’t there before!

That’s right, you can even see Santa Claus at Animal Kingdom!

Santa will be waving from his own flotilla boat zipping through the Animal Kingdom waters. We found this to be one of the fastest boats on the day we saw him, so wave to him while you can!

HOW TO SEE THEM 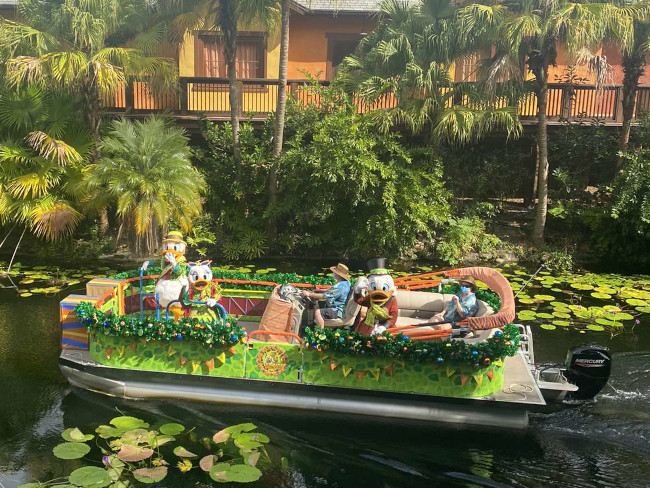 If they’re ducks, why do they need a boat? Photo by Evelyn Long

You’ll want to keep both your eyes and ears peeled because the flotillas don’t run at set times. They will float by randomly throughout the day.

Walt Disney World (WDW) wants to ensure guests don’t gather, which is why they have the flotillas scattered.

Even though there aren’t specific times for the festive and character-themed boats, here are some tips to make sure you can see at least some of the flotillas.

Since there aren’t any character meet-and-greets right now due to health and safety reasons, the festive flotillas at Animal Kingdom are the perfect way to see your favorite characters. Plus, you get to see more characters than you normally would—and multiple times a day.

It’s important to also add that as exciting as it is to see characters on boats (and decked out for the holidays), you should always make sure you’re aware of your surroundings.

Don’t gather or bunch in a group to catch a flotilla. Maintain that social distance and if you need to wait because there are too many people, please do. Guess what? Another boat will float by eventually.

Animal Kingdom is one of the most unique WDW parks and it’s even more stunning during the holiday season.

Enjoying our coverage of the holidays at Walt Disney World? Consider signing up for our newsletter, so you never miss a beat, and head over to our Facebook page to tell us which festive flotilla you’re most excited to see at Disney’s Animal Kingdom!