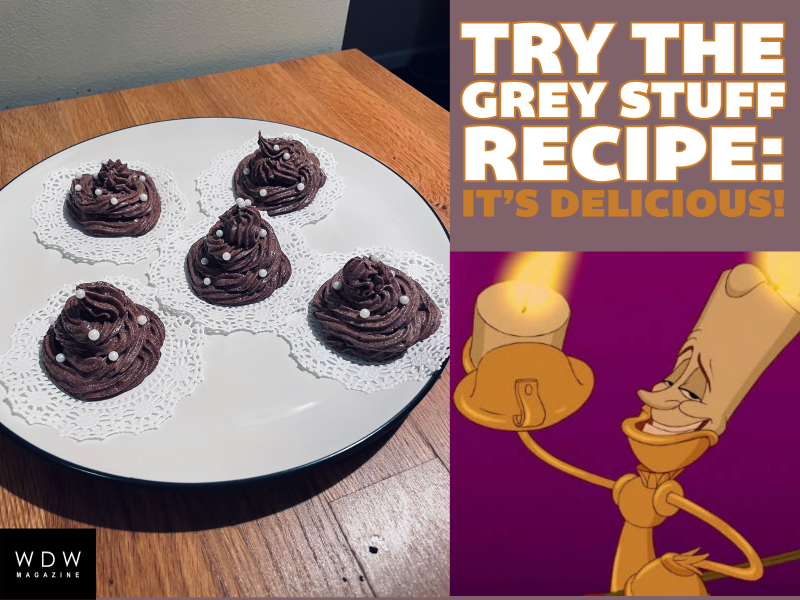 Wondering how to make the Grey Stuff from Beauty and the Beast? Try our copcycat Grey Stuff recipe from Disney; it’s delicious—and super easy to boot.

It’s a tale as old as time: You see something delicious on your screen, and you wish you had it right there in front of you. I’m still waiting for the day I can stick my hands through my TV and pull out the food (million-dollar idea, Imagineers, though Willy Wonka may already have that copyrighted).

For now, I have resolved to make some goodies I can’t stop thinking about on my own.

The top of that list for me is the bewildering Grey Stuff. No matter how many times I’ve seen it, the moment Lumière lifts the lid off that silver platter and shows Belle a plethora of sweet and savory treats, my eyes are always drawn to that mountain of … well, grey stuff!

Considering it’s nearly impossible to figure out what this dessert is from the movie alone, I went to the source and followed this Grey Stuff recipe, courtesy of the Disney Parks Blog. Now please, be my guest, and let’s get to it. 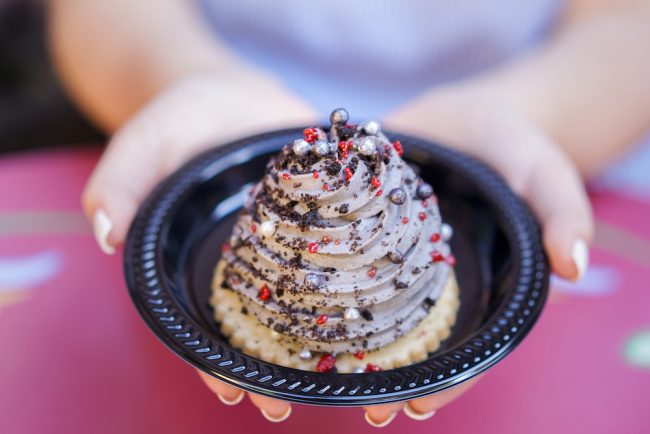 Here’s what Disney came up with using the same recipe. Photo courtesy of Disney Parks Blog 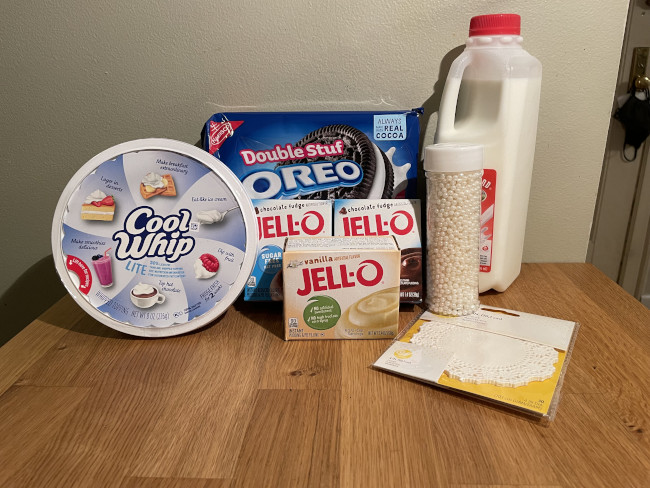 Everything you’ll need to make the Grey Stuff. Photo by Amy Lynne Berger

1. Pour 1.5 cups of cold whole milk into a large mixing bowl. Add instant vanilla pudding mix and whisk for about 2 minutes, or until it is smooth and slightly thickened. Store in the refrigerator for 1 to 2 hours, until firm. 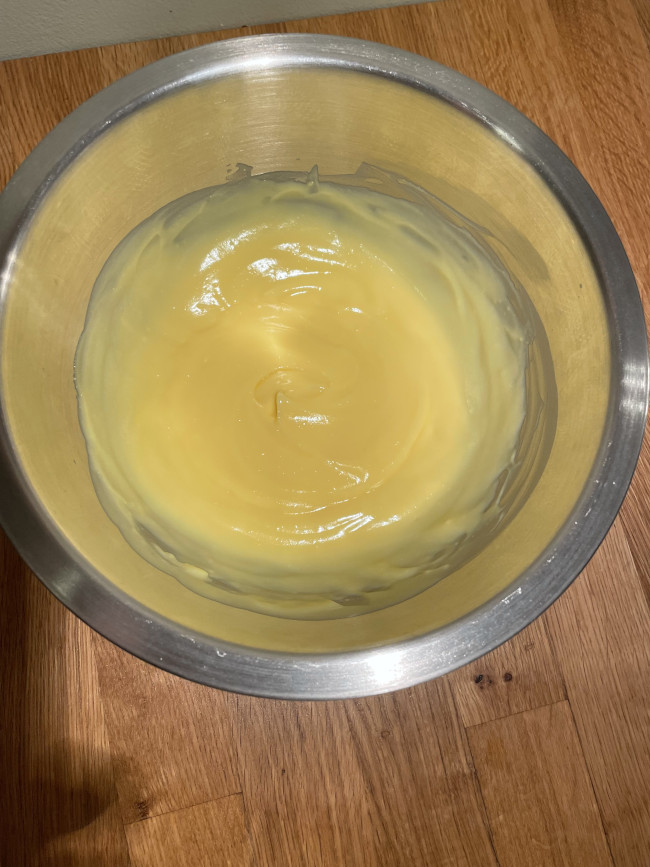 2. Use a food processor to purée chocolate sandwich cookies; pulse until finely blended. 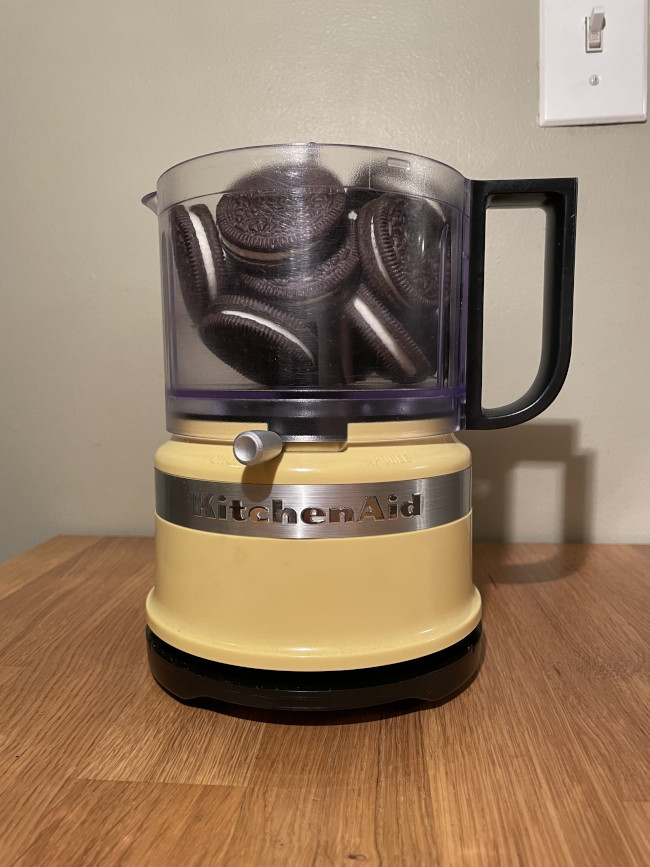 3. Fold the blended cookies into the pudding mix, stirring until fully mixed. 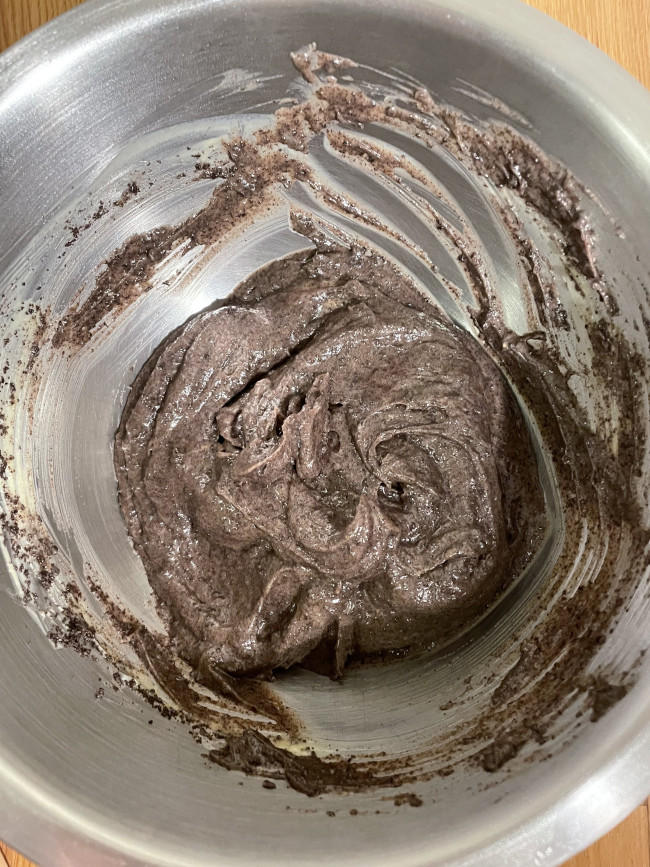 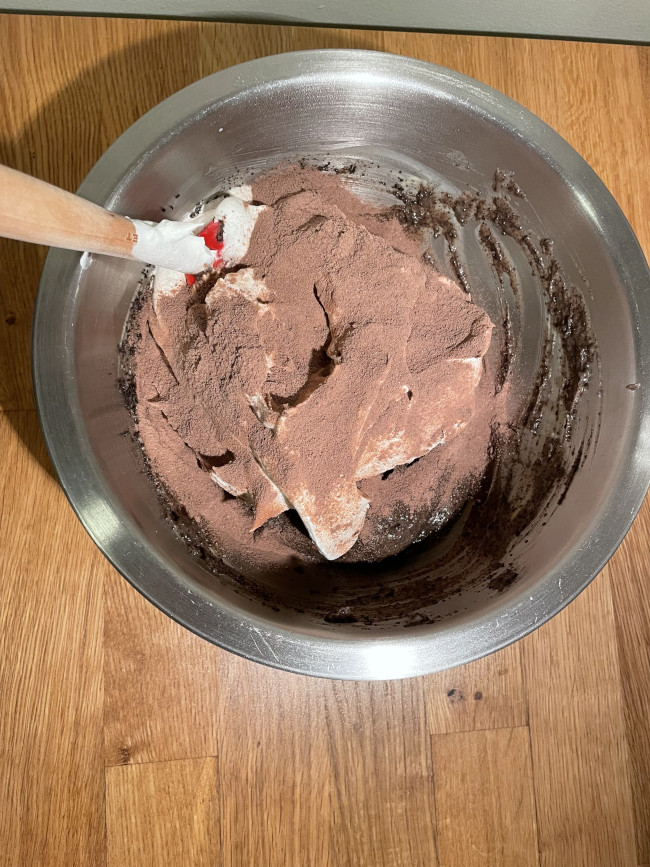 5. Store in refrigerator to chill for 1 hour. 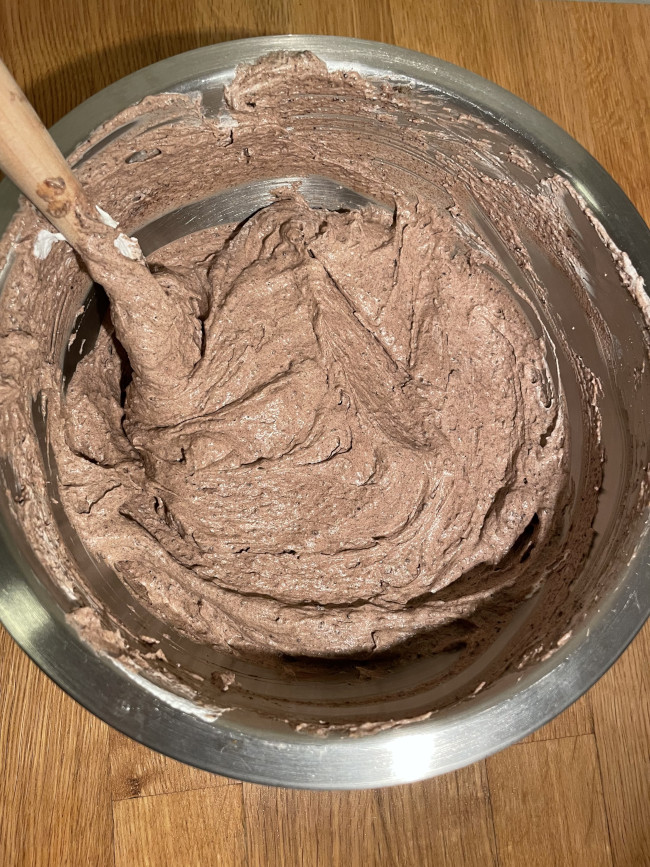 6.Spoon the Grey Stuff into a piping bag fitted with your tip of choice. Pipe Grey Stuff onto scalloped sugar cookies or doilies. Top with sugar pearls. 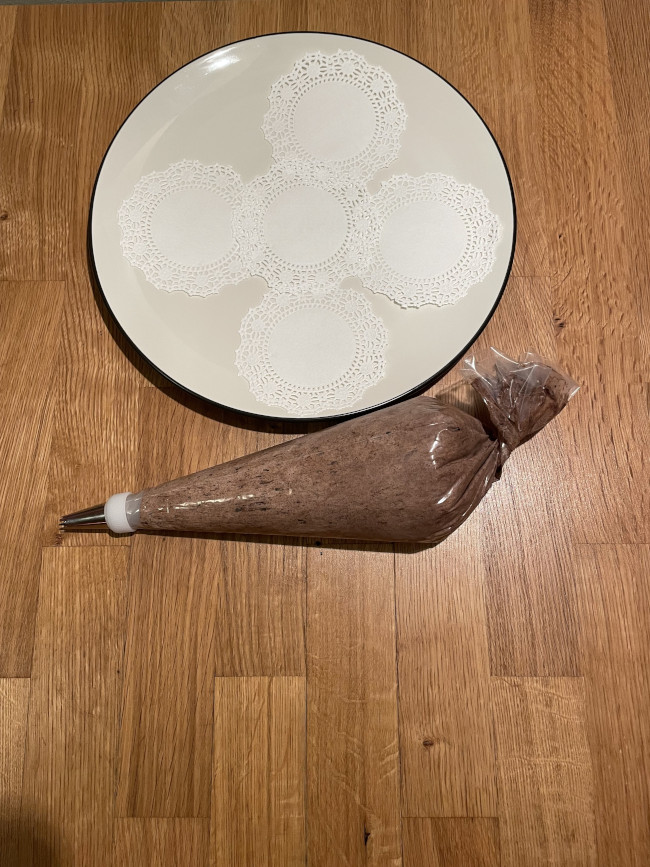 Can’t get enough Disney food? Each month, our print magazine dives deep into some of the tastiest restaurants at Walt Disney World, with stunning photos, expert reviews, and personal recommendations.

And if you subscribe by Oct. 31, your subscription will start with our November 2021 food issue, which covers all things Disney food, from exclusive interviews with Chef Art Smith and Wine Bar George, a peek inside the secret wine cellar at Tokyo Disneyland’s Magellan’s, and Imagineering morsels inside the new Remy ride. 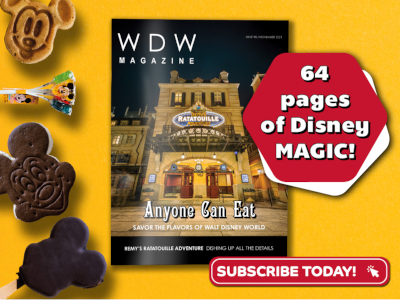 🍽️ The Magazine’s Worth It, Ask the Dishes! 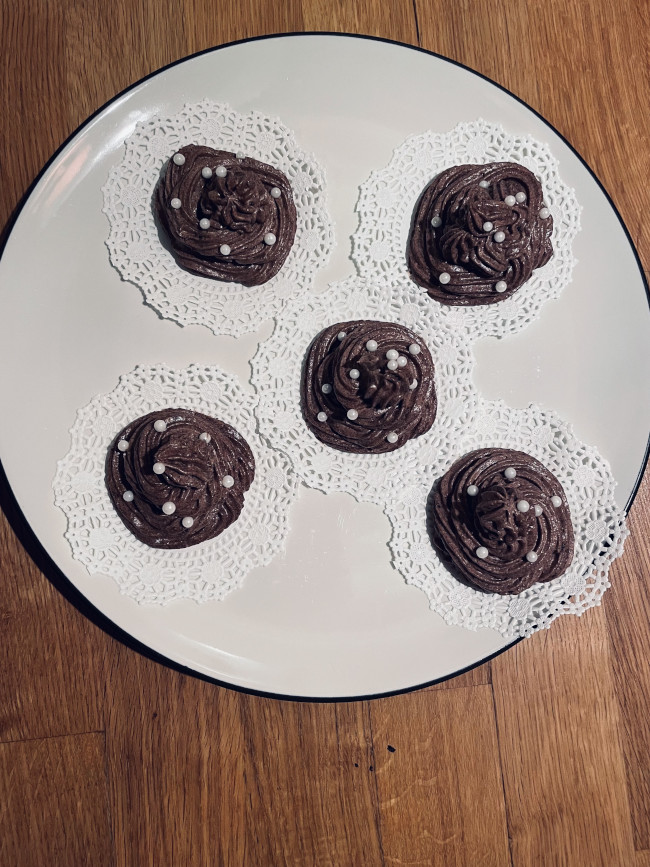 While I hesitate to admit the obvious, it was delicious!

Don’t believe me? Fine! Then go ahead and starve!

This Grey Stuff recipe from Disney was straightforward and easy to make. While I stuck to a smaller batch, just multiply the recipe once or twice, and you have yourself an affordable and charming party dessert.

This recipe suggests being piped onto scalloped sugar cookies. However, if you want to skip making sugar cookies or don’t want to deal with finding them to buy, you can do what I did and present them on little paper doilies. I think they are just as cute and work just as well. 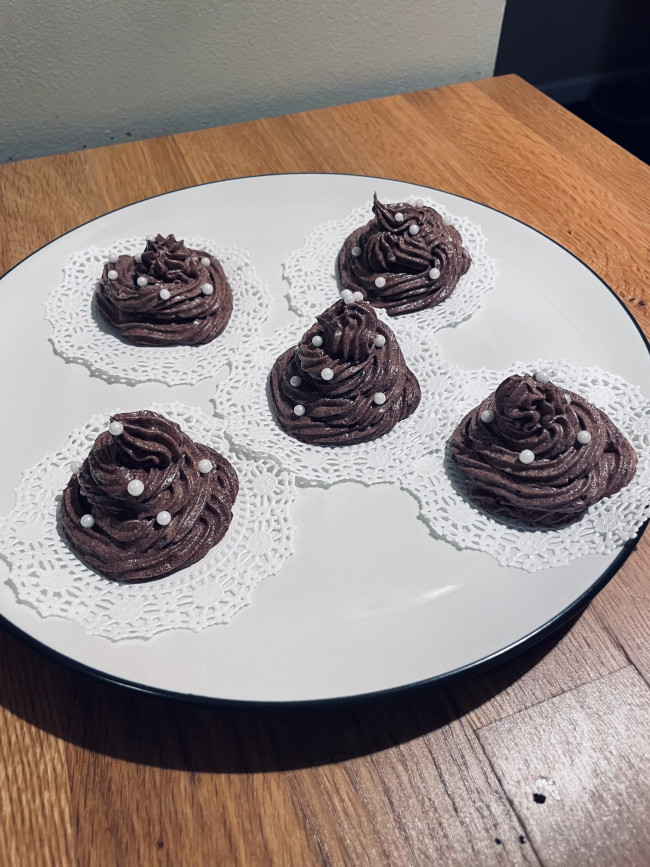 I’d recommend trying this recipe out the next time you watch the original or live-action movie. Bon appétit!

Where to Get the Grey Stuff at Disney World 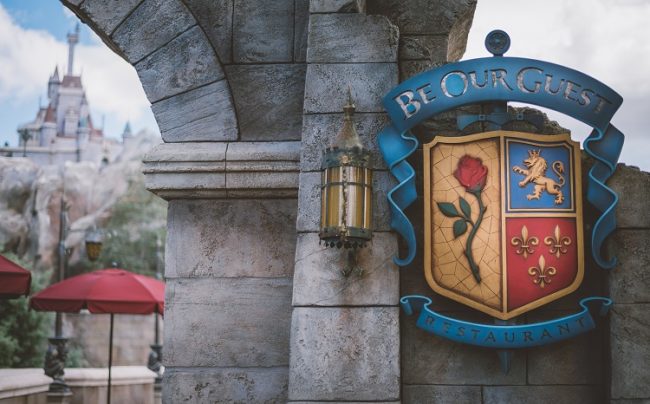 Be Our Guest is the only place to order the Grey Stuff at Disney World. Photo by Judd Helms

“Anyone can cook,” says Chef Gusteau. But what if you just want to take it easy?

Luckily, you can get the Grey Stuff at Walt Disney World. Right now, it’s served at one place: Be Our Guest Restaurant in Magic Kingdom.

And while you’re there, do us a favor and try the Squid’s Revenge cocktail and tell us what you think.

Want to make more Disney-inspired food? Check out these recipes for Cheeseburger Spring Rolls, Porridge from Mulan, or Winnie the Pooh Hunny Pots!

Sneak Peek: Beauty and the Beast Sing-Along at EPCOT

Amy Lynne Berger is a New York-based actor, writer, and comedian, with a Disney World-based soul. Select credits include performing/writing for Disney+, Disney Food Blog, Hulu, and the Upright Citizens Brigade. She’s always in the mood for Mickey-shaped food and can often be found hiking her favorite mountains: Big Thunder, Expedition Everest, and Space Mountain. For more about Amy, you can check out her website or follow her on Instagram and Twitter!

Amy Lynne Berger is a New York-based actor, writer, and comedian, with a Disney World-based soul. Select credits include performing/writing for Disney+, Disney Food Blog, Hulu, and the Upright Citizens Brigade. She’s always in the mood for Mickey-shaped food and can often be found hiking her favorite mountains: Big Thunder, Expedition Everest, and Space Mountain. For more about Amy, you can check out her website or follow her on Instagram and Twitter!