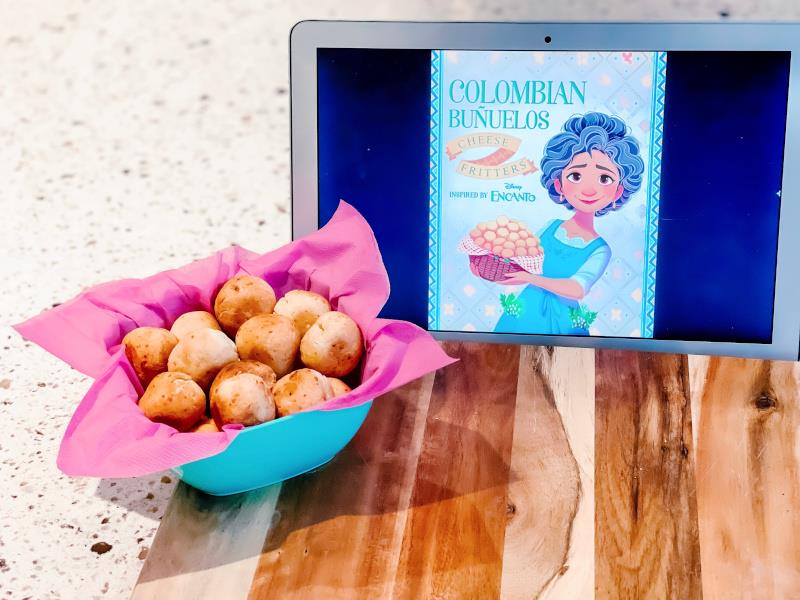 Channel your inner Julieta Madrigal as we test out Disney’s Encanto recipe for Colombian Buñuelos together! Just one rule: We don’t talk about Bruno.

Be honest. How many times have you been humming those ear worms from Encanto this week?

Encanto has achieved viral success, smashing billboard charts, breaking records, and becoming a majorly hyped Disney hit. I’ve never seen so many people from different generations and different walks of life being so enamored with the same Disney film.

And that led Disney to publish a special recipe inspired by Encanto for a delicious dish called Colombian Buñuelos.

This article contains affiliate links. If you’d like to support us directly, please consider subscribing to our Digital Edition, and instantly unlock access to over 100 issues of WDW Magazine!

What Are Colombian Buñuelos? 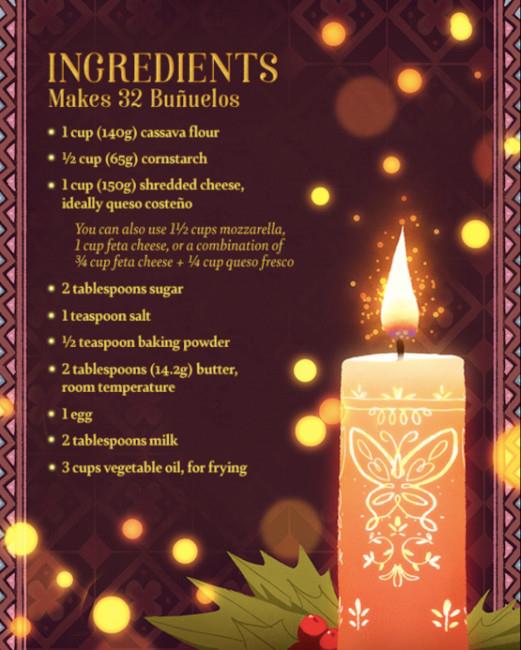 In Encanto’s opening song, “The Family Madrigal,” Mirabel introduces her mom, Julieta, as she watches her heal the villagers’ ailments with welcoming, delicious buñuelos.

While in reality, buñuelos cannot heal ailments, they are delicious. And they’re really simple. Another word for buñuelos is cheese fritters. They’ve got a crispy crust, are full of warm cheese, and are often served at Christmas.

Disney recently released Julieta’s recipe for Colombian buñuelos. I knew immediately that I’d be recreating these.

Want to become an honorary Madrigal and make them too? Keep reading! 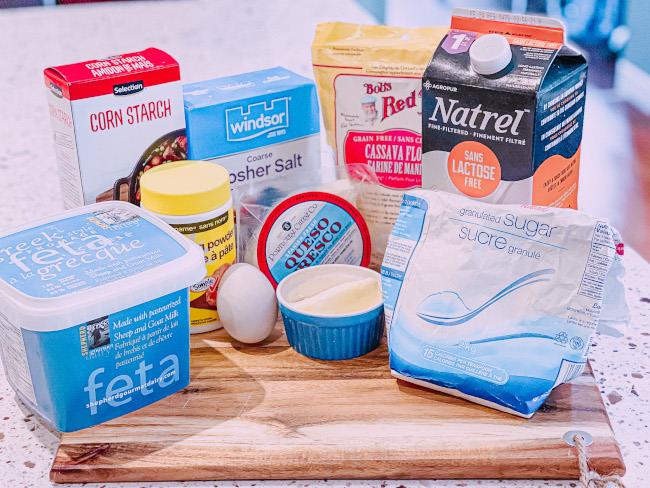 Here’s the recipe, directly from Disney.

Most ingredients you might already have at home, but there are two rather unique ingredients to note.

We’re using cassava flour, which is amazing because it’s grain and gluten free! We can always use more gluten-free Disney treats in the world.

Cassava is a starchy root vegetable native to South America, and its flour is popular in Colombian recipes.

It took me a few trips to find it; however, if you’d rather shop online, you can find it here on Amazon.

I couldn’t find queso costeño, but as the recipe suggests, you can use a combination of shredded queso fresco and shredded feta cheese in place of queso costeño. 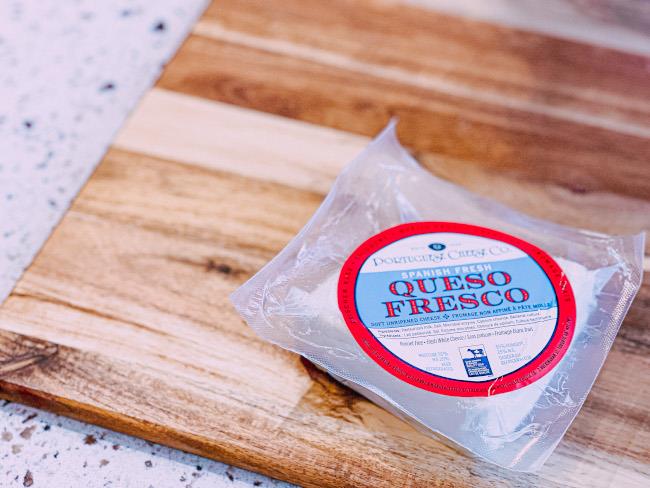 I found my queso fresco at the grocery store, but you can also have it delivered on Amazon.

Gather the rest of your ingredients, which include cornstarch, sugar, salt, baking powder, room temperature butter, an egg, milk, and vegetable oil. 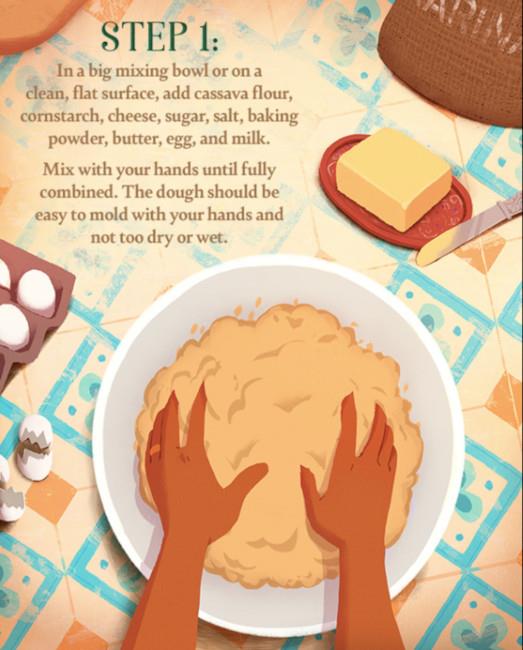 Remember to shred your cheese! I almost crumbled it instead (just a habit when using feta), but finely shredded cheese is very important for the consistency of the dough.

If the cheese pieces are too big, it could cause your buñuelos to crack once they hit the frying pan with the hot oil, which is not what you want. More on that in a moment.

As I mixed all my ingredients together, I noticed the texture felt a bit too crumbly. I began researching what the buñuelo batter should look and feel like and found that it’s best when it’s somewhat of a playdough consistency. 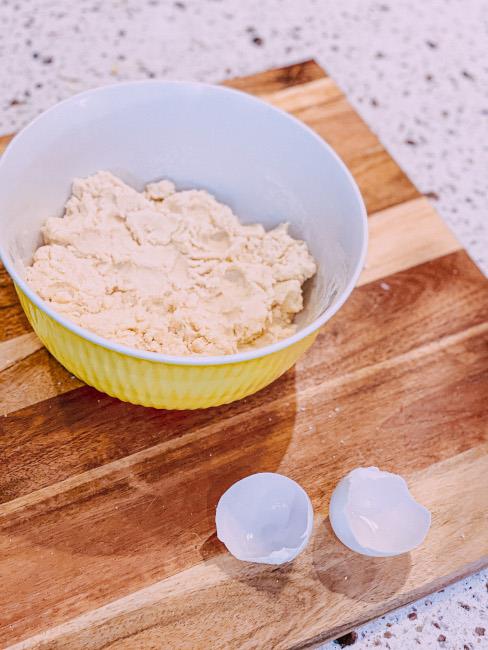 I added small amounts of milk, 1 tablespoon at a time, then mixed again, until my dough began to form more easily without crumbling and becoming piecey.

No two batters are the same, so be sure to feel the texture of your own dough as you combine your ingredients. You may not need to add extra milk the way I did. 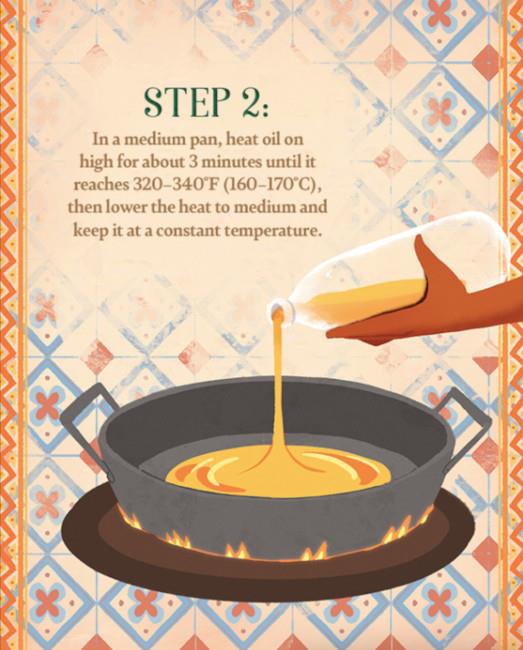 If you have younger members of your familia making these buñuelos with you, they should leave these next couple steps to the grownups of the casita.

You want the oil on high to start, as it heats up and gets very hot for a few minutes. Then, be sure to carefully turn your stove down to a medium to medium low temperature. Use oven mitts to be extra safe.

The reason you don’t want the oil too hot once you place your buñuelos into the pan is because the balls of dough can crack open, causing the oil to splatter. Trust me, oil burns are no picnic.

You can form your dough into circular ball shapes before you put the oil in the pan and set them aside, or you can do it while the oil is cooling down. I formed my dough before getting the oil heated up. 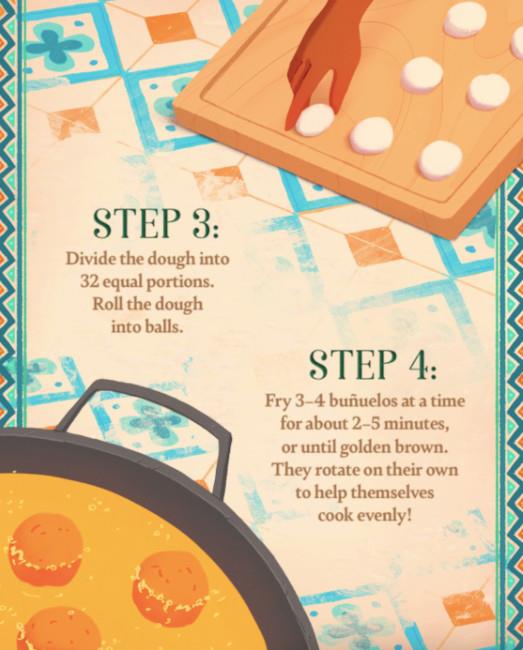 The recipe says that it makes 32 buñuelos. I started out making each ball of dough a medium size and soon realized it would yield far fewer than 32, so I began again, shaping smaller circular balls together. I would say they were about the size of a mini donut (or Timbits, for my fellow Canadian readers!).

I set the bowl of little tasty balls of dough aside until it was time to carefully place them into the hot frying pan, a few at a time. 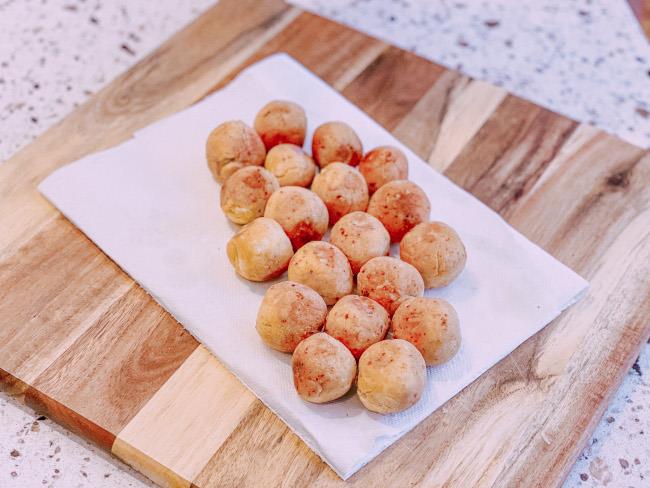 After frying them all up, I grabbed a heat-safe pair of kitchen tongs to safely and easily remove the buñuelos from the pan. Per Disney’s instructions, I laid them out onto a paper towel, all golden brown and sizzling, to rest and to soak up any excess oil. 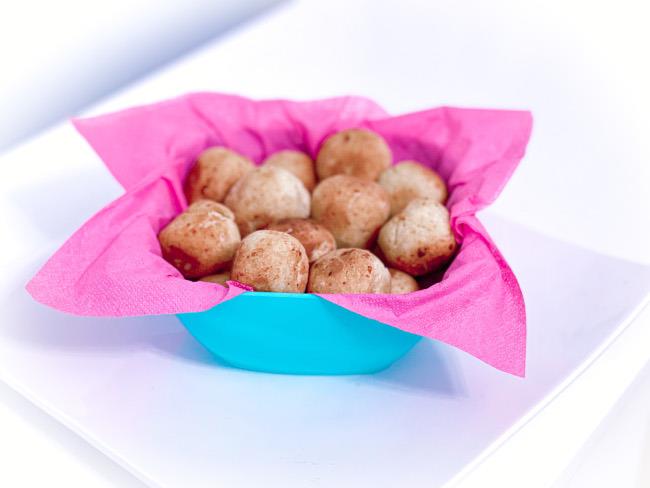 Admittedly, I’ve never tasted buñuelos before, so I have no basis for comparison, but wow, these are tasty.

I can see why Julieta had a massive queue of people lined up for her buñuelos in Encanto (in addition to seeking cures for their maladies). These delicious fritters are slightly crunchy on the outside and pillowy on the inside, a little bit salty, a little bit cheesy, with a tiny hint of sweetness.

From what I’ve gathered through a little research, in Colombia, buñuelos are enjoyed all year round, but are particularly popular during the holiday season, served with natilla (which is a custard-like dessert) and Colombian hot chocolate, which fun fact, is made with cheese!

If you tried out this recipe for Columbian buñuelos from Disney, what did you think? Will you be making these for your next gathering with your Encanto-loving familia?