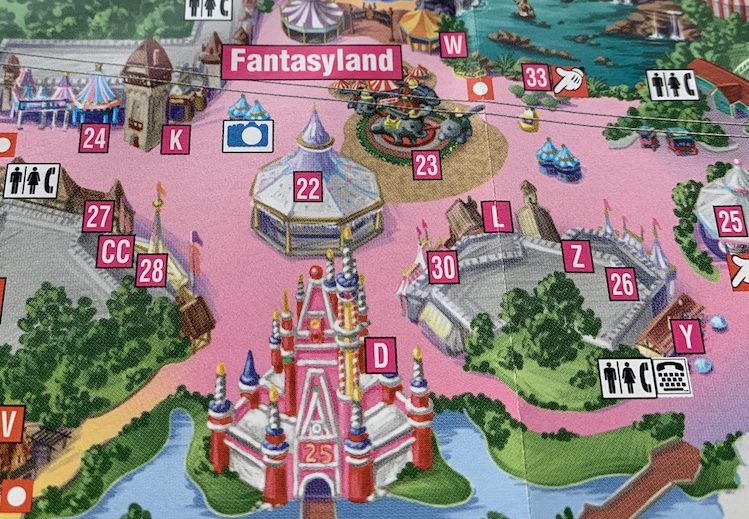 Let’s travel through time and visit a Disney World past—find out (or revisit) what it was like at Magic Kingdom in 1998!

Every trip to Magic Kingdom starts with a stroll down Main Street.

The hustle and bustle of crowds bursting through the tunnels under the railroad, quickly deciding left or right to avoid the crowds (or in my case making the first of many stops at the restroom!) 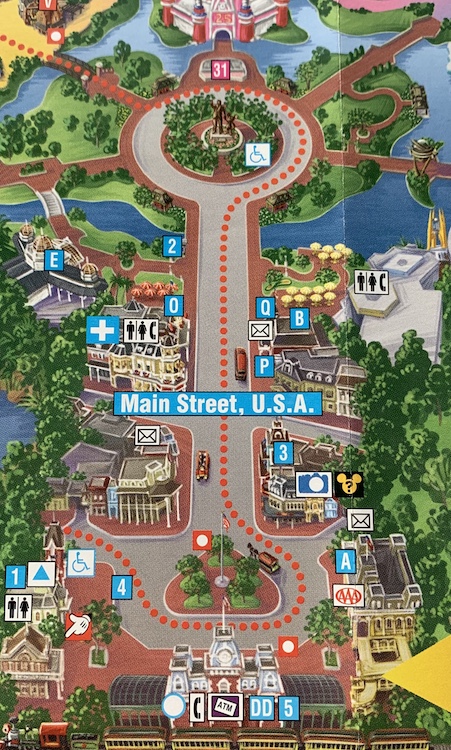 Magic Kingdom in 1998 had no Main Street Confectionery or Main Street Bakery. Photo by Trisha Daab

Is it the sugary smells of Main Street Confectionery? The guests slurping down venti Frappuccinos?

Where are the lines at the PhotoPass Photographers for the quintessential family photo?

And why is the castle covered in balloons?

But Wait, Why Is Cinderella Castle Pink?

Here at Magic Kingdom in 1998 (until January 31st), Cinderella Castle is decorated to celebrate the 25th anniversary of Walt Disney World (WDW).

Your stroll down Main Street ends with a giant pink balloon cake. 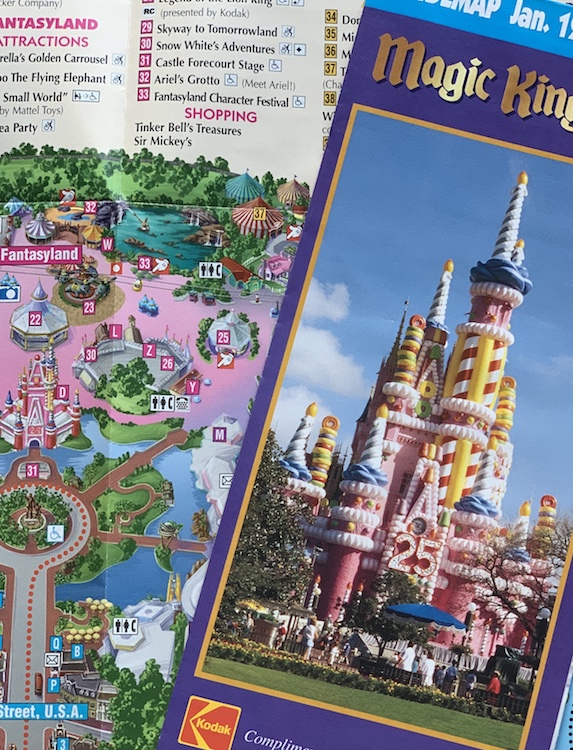 The pink balloon castle was prominently featured on the cover and in the map from 1998. Photo by Trisha Daab

Remember, this is likely the first time you’ve seen this. There is no Instagram feed full of pics of the castle, no Facebook Disney fan groups.

Before The Skyliner, There Was A Skyway 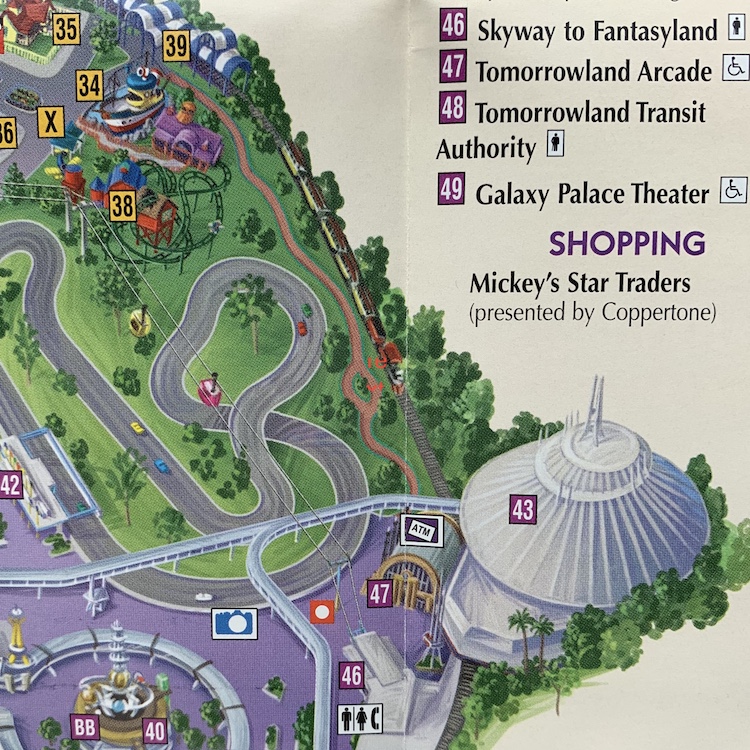 Before the Skyliner, Magic Kingdom had the Skyway. Photo by Trisha Daab

After one last pic of the balloon cake castle with your disposable camera (thank goodness you splurged and got the 36-exposure), out of the corner of your eye, you see colorful gondolas floating through the sky.

Intrigued, you set off toward Tomorrowland to see the Skyway, a shortcut between Fantasyland and Tomorrowland.

You cross the bridge expecting to hear monsters on a laugh floor and see a rambunctious blue alien scrounging for desserts.

No cute blue alien burping chili dog in your face on Stitch’s Great Escape here. No meet-and-greet either.

In its place, you find ExtraTERRORestrial Alien Encounter. 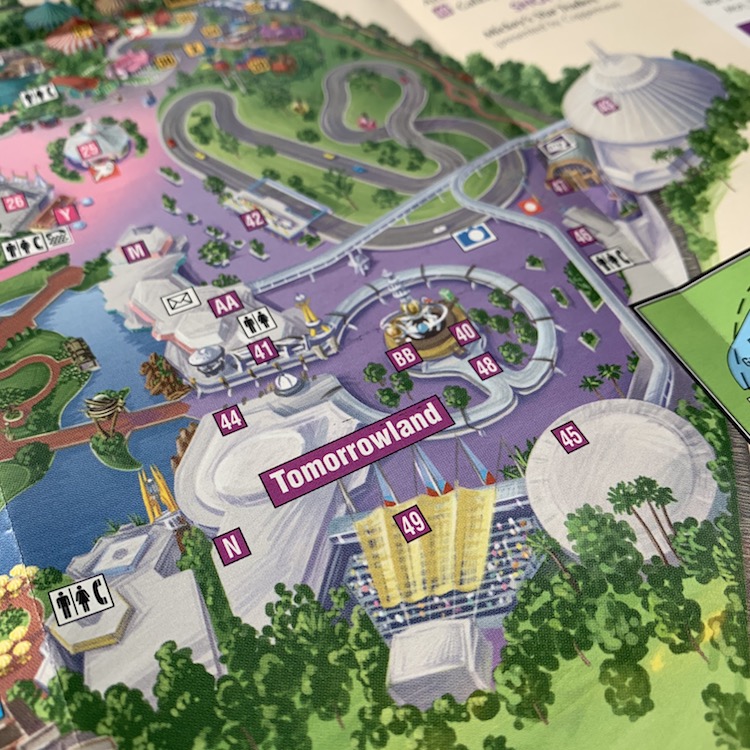 No Buzz, Stitch or Monsters Inc in Tomorrowland in 1998. Photo by Trisha Daab

You quickly look right and see The Timekeeper—a Circle-Vision 360 attraction that showed guests visions of the past and future, hosted by its namesake, a wisecracking Audio-Animatronic robot. 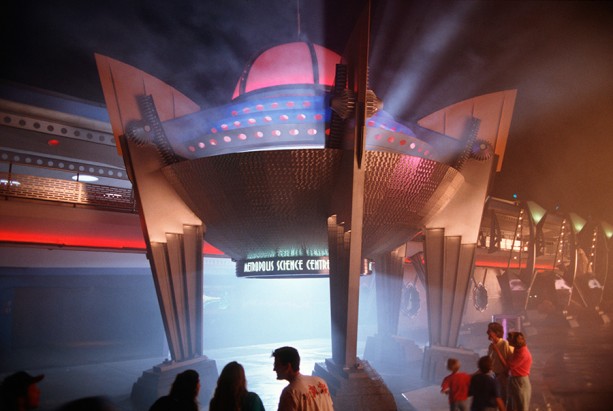 The Timekeeper in Tomorrowland. Photo Courtesy of Disney Parks Blog

This attraction must be huge—that same building in 2020 houses both Monsters, Inc Laugh Floor and Buzz Lightyear Space Ranger Spin.

No battling your friends for bragging rights on Buzz Lightyear? Does that mean… yep, that’s right. No meeting Buzz either.

Instead, you find Galaxy Palace Theatre, where a space-Mickey and his friends sing and dance in futuristic space wear.

Rounding out your walk through “old” Tomorrowland, you sigh with relief at the familiar sight of Space Mountain and Tomorrowland Speedway. But don’t get too comfortable.

You are walking along towards Fantasyland. Just beyond the Mad Tea Party you spot colorful rooftops and a big boat. 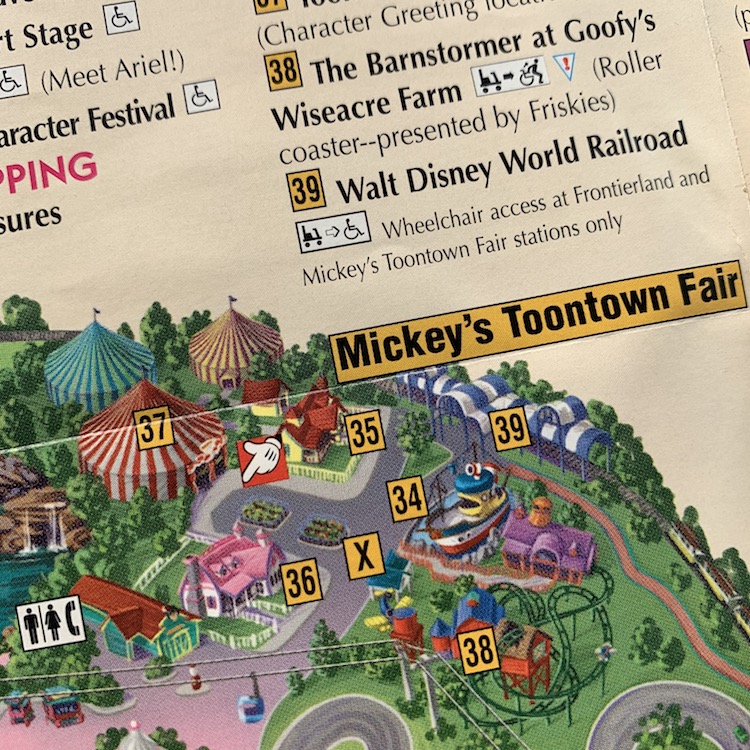 Mickey’s Toontown Fair was home to country houses for Mickey and Minnie. Photo by Trisha Daab

After taking a peek inside Minnie’s fridge you wander over to Donald’s boat for a quick splash in the play area.

Then onto Mickey’s Country House to see his living room and holiday decorations. 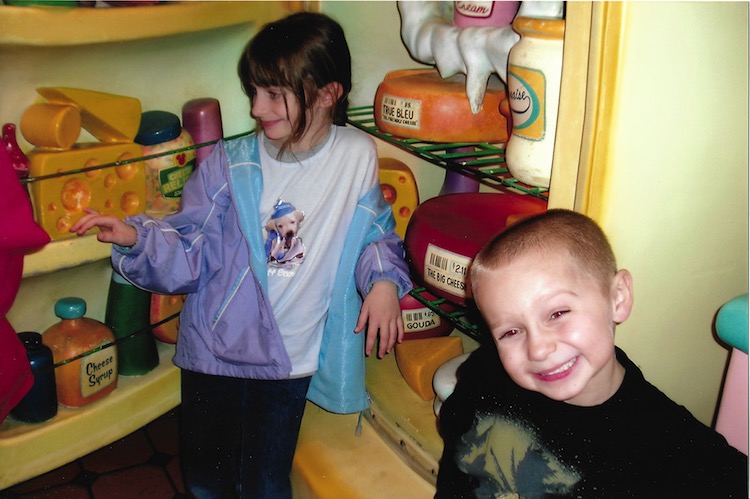 Our kids had a lot of fun digging around in Minnie’s fridge in 2005. Photo by Trisha Daab

It’s a lot different so here’s a list to help you explore this whole new world. 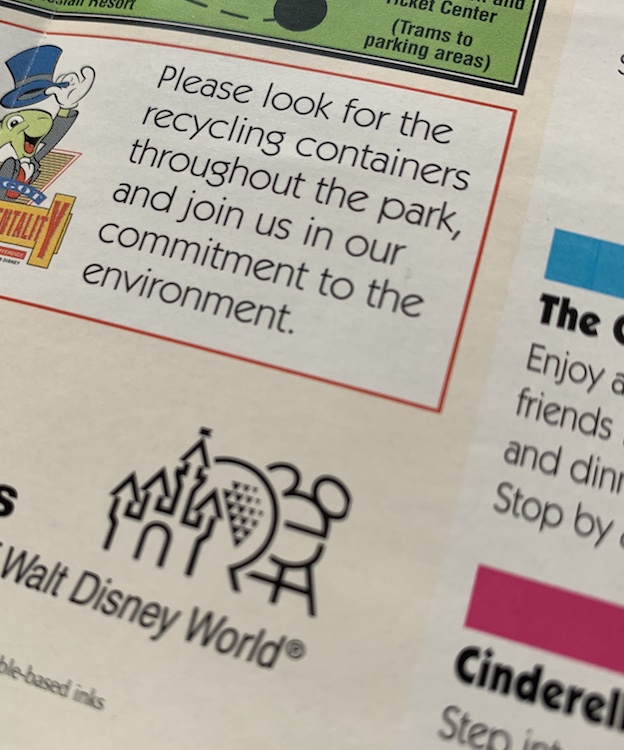 Which park icon is missing? Photo by Trisha Daab

Departing it’s a small world you crave more of the familiar, so off to Liberty Square.

The mansion is haunted, the pavement still has its special coloring and you can get a turkey dinner.

Well, except Mickey May stop by; 1998 Liberty Tree Tavern is a character meal. 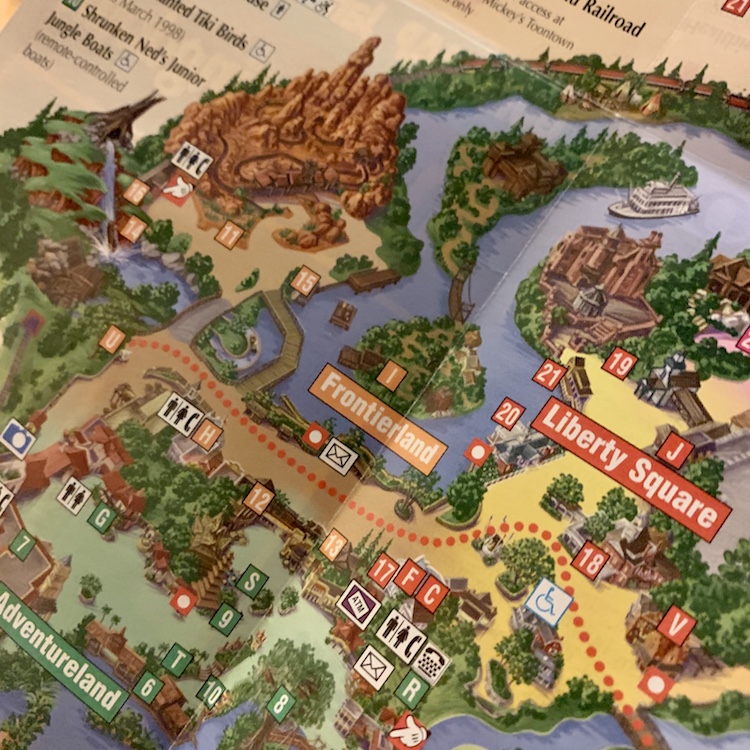 Liberty Square and Frontierland are the lands least changed from 1998 to now. Photo by Trisha Daab

As you head towards Frontierland, you’re drawn to the familiar screams from Big Thunder Mountain and that whoosh sound from Splash Mountain.

A Land Without Aladdin

Rounding the bend to Adventureland things are starting to look different again. Pirates is there with its familiar water ride smell. 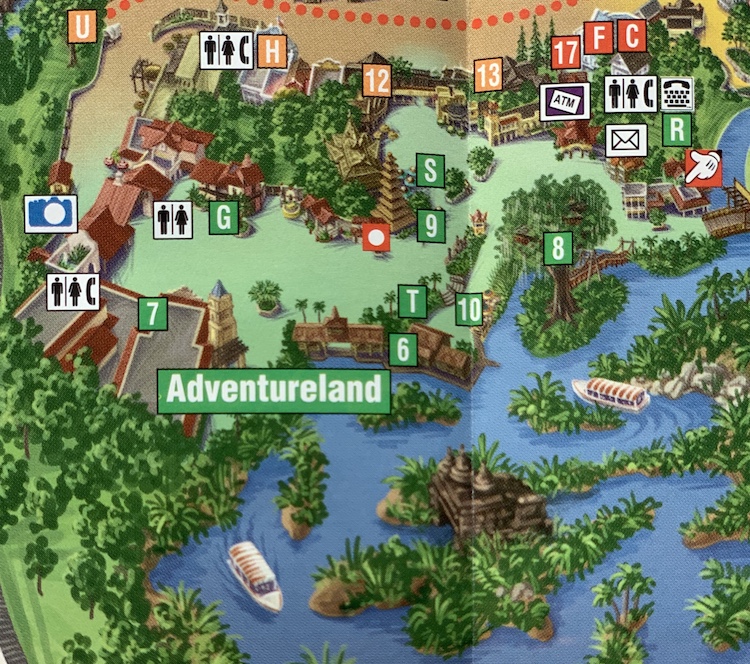 Adventureland before the addition of Aladdin. Photo by Trisha Daab

There’s still a redhead but no A Pirate’s Adventure game. Instead you help save the land by finding the mystic golden idol in the Adventureland Challenge.

The walkways are nice and open. There’s no Magic Carpets of Aladdin or a camel spitting on your head. No meeting Aladdin or Jasmine (but you can find a payphone nearby.)

A Nighttime Show With No Let It Go!

As you cross the bridge from Adventureland, Dole Whip in hand, you see twinkling lights and hear Jiminy Cricket talking about Disney fantasies coming to electric life.

It’s SpectroMagic! A nighttime parade and it’s not even Christmas or Halloween!

Princesses are twirling in light-up dresses and Mickey’s float has more lights than Broadway. 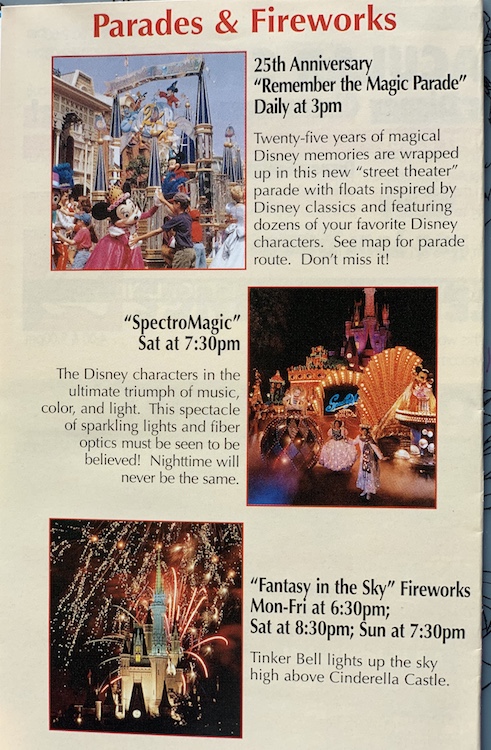 Parades in 1998 included SpectroMagic and Remember the Magic. Photo by Trisha Daab

In 1998 it was all about The Little Mermaid.

Instead of a happy snowman and Elsa, you see Ariel and a school of her friends from under the sea. Even Ursula sails by with twinkling purple lights accenting her “body language!”

After Fantasy in the Sky fireworks, that’s it. You’re done.

In 1998, the Adventurers Club in Pleasure Island was the place to be, but you trek back to your resort to rest up for your day tomorrow… at MGM Studios! 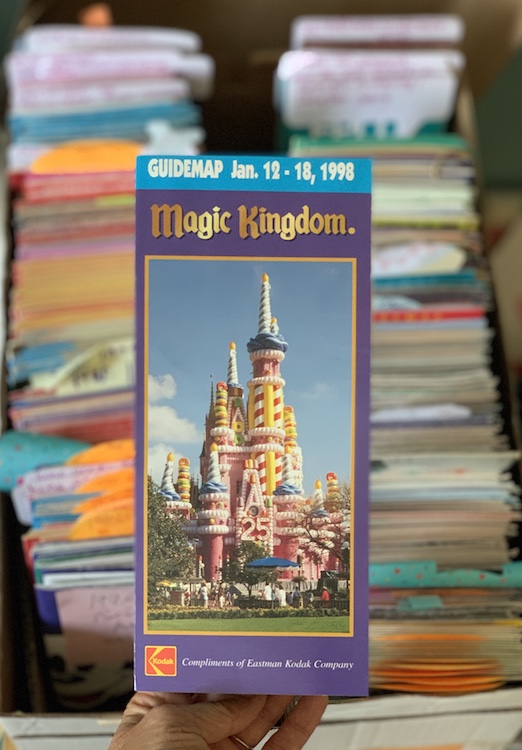 Magic Kingdom 1998 is one of over 50 WDW maps in this magical box. Photo by Trisha Daab

Love Disney history? Follow our blog and subscribe to our newsletter for more Disney maps and our “today in Disney history” series.