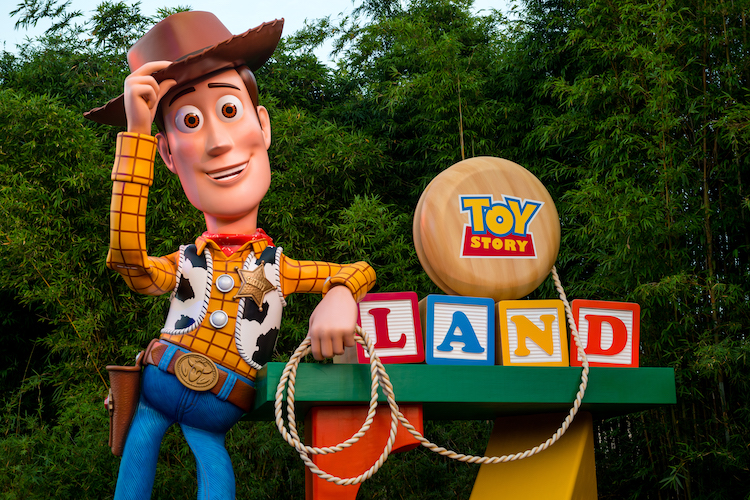 When I think of Toy Story Land in Disney’s Hollywood Studios, the first thought that comes to mind is my own 90s childhood nostalgia. Let’s look at 5 Toy Story Land facts that dive into those memories.

While Toy Story is a series for the ages, having seen this film debut in theatres over Thanksgiving break in the fourth grade, I can’t help but feel this realm dedicated to Pixar’s debut film was created just for me.

Every beloved character is represented, the menu is kiddy with a grown-up twist, and the cutest thing of all? You are shrunk down to fit right in with Woody and the gang in Andy’s backyard! Let’s fuel up on some Totchos and explore all the childlike imagination Toy Story Land has to offer!

1. Honey, I Shrunk the People!

Toy Story Land was designed to give the illusion of feeling like a toy in Andy’s backyard, and from the second you arrive in this land, you feel just that! 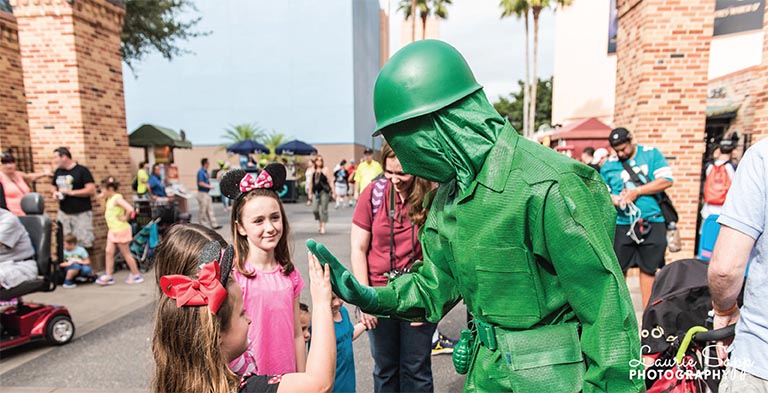 The Green Army Man and his buddies used to roam outside Toy Story Midway Mania. Photo by Laurie Sapp

With Woody standing at the entrance at about 20-feet tall, it’s easy to instantly feel surrounded by giants! But, judging by Andy’s 25-foot shoe prints, the intention isn’t to make you feel like just any toy.

When you match the size of Woody to the relative size of Andy, this makes guests to scale with the green army men—the most mobile of the toys—bringing extra life, and reality, to meet-and-greets and shows with Sarge himself. 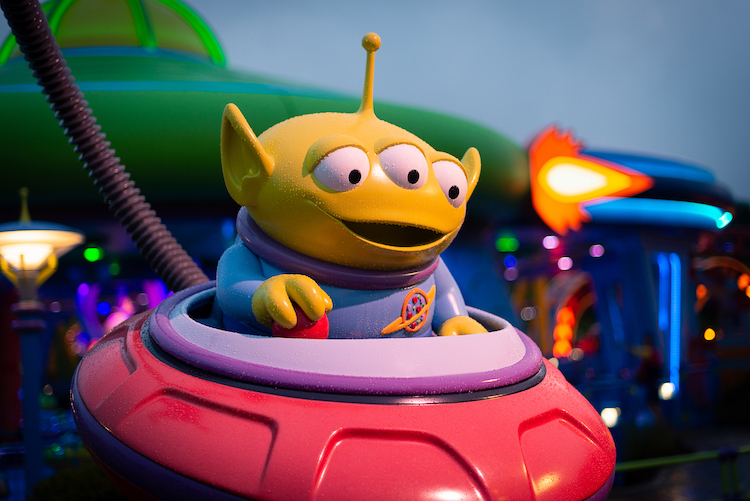 Alien Swirling Saucers is more than an attraction themed around the aliens we know and love from Toy Story – it takes you out of Andy’s backyard and into the game bonanza Pixar references so frequently, Pizza Planet!

In the middle of the three floors wherein the vehicles move, you will see a large claw, much like the one that would beam the little green guys to the motherboard. But don’t worry about being whisked away to an alien planet—this one is completely harmless.

Fitting in with the theme, the ride may not immediately seem like it can just be tossed in among the rest of Andy’s creations, but it actually has more purpose in Andy’s backyard than you might think. The ride itself was a toy won by Andy at the aforementioned Pizza Planet! 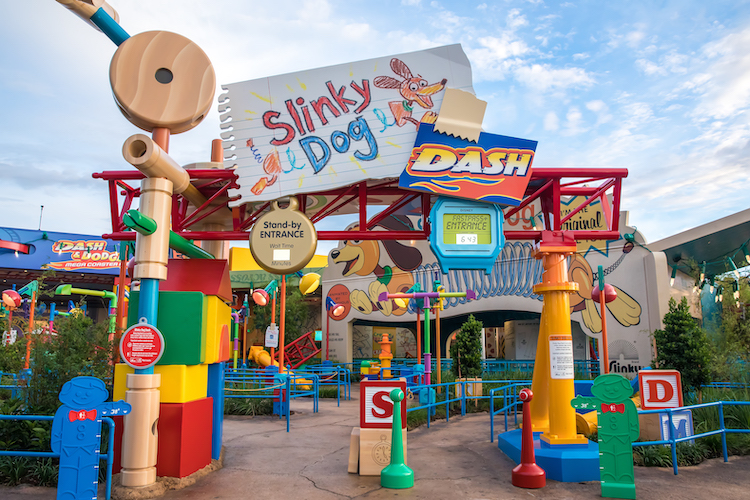 This sign actually has a hidden Easter egg on it! Photo by Brett Svenson

The specifics of which Toy Story film you are in once you enter Andy’s backyard may be subtle, but the clues are there if you know where to look.

The gold-rimmed Standby sign at Slinky Dog Dash shows the wait time for the attraction, but as you pass under, you will see that it is actually the collar of Andy’s dog, Buster! It even has Andy’s address, 234 Elm Street, on the back.

Since Buster was gifted to Andy at the end of the inaugural Toy Story, and because you can see plenty of Al’s Toy Barn signs throughout the land, we can assume that we are perusing Andy’s backyard sometime during Toy Story 2!

4. What Did Andy Major in Again?

The fence line in Andy’s backyard may look familiar. It is made from a popular children’s toy called KNEX. The cool thing about KNEX is that it is a STEM activity that encourages creativity, problem-solving, and construction skills (the E in STEM is for Engineering!). 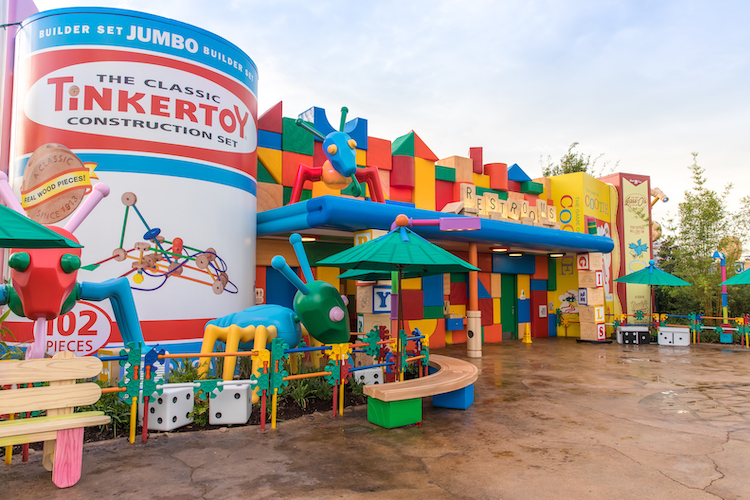 Disney is always encouraging fun while learning! A fun little tidbit is you can even bring Disney to your home the same way Andy brought Toy Story Land to life. KNEX features Space Mountain and the Dumbo ride amongst some of its creations!

So, not only is Andy having a blast whilst building the set in his backyard, but he is also brushing up on his engineering expertise! 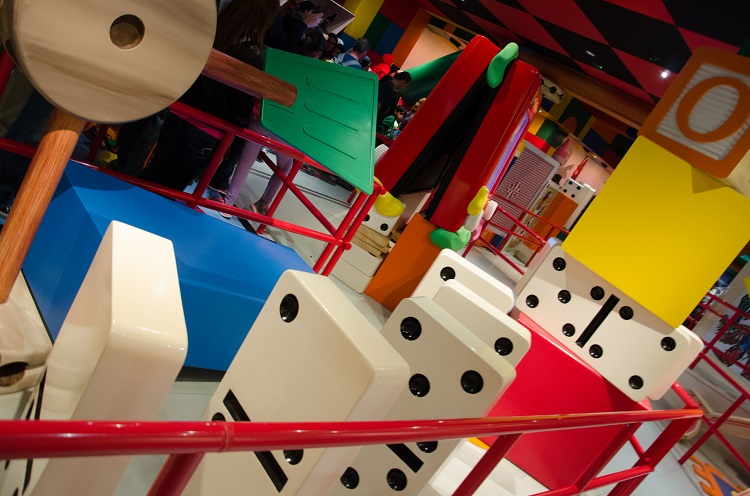 Dominoes, checkers, and a ViewMaster line the interior or Toy Story Mania. Photo by Cliff Wang

Some of the toys in this land, specifically in the queue of Toy Story Mania and Slinky Dog Dash are a plethora of older, vintage toys that would have been well retired long before Andy’s time.

These aren’t toys you can find randomly at Al’s Toy Barn, either. Some look like the ones his Mom might have played with, while others could have been pulled from an antique store.

Toys and Games to Spot in the Toy Story Mania Queue Include:

The most logical explanation is that he would have either had to do some digging in his attic to uncover some of his mother’s old toys, or Andy is a rescuer of old, forgotten toys. I tend to believe in the latter.

Next time you’re in Toy Story Land, take a moment to think about the story. Andy, the rescuer of forgotten toys, brings them life amongst the new, while he nourishes his brain—it just goes to show what kind of person Andy grew up to be by the time we saw him in Toy Story 3.

More Disney Details You May Not Have Noticed: