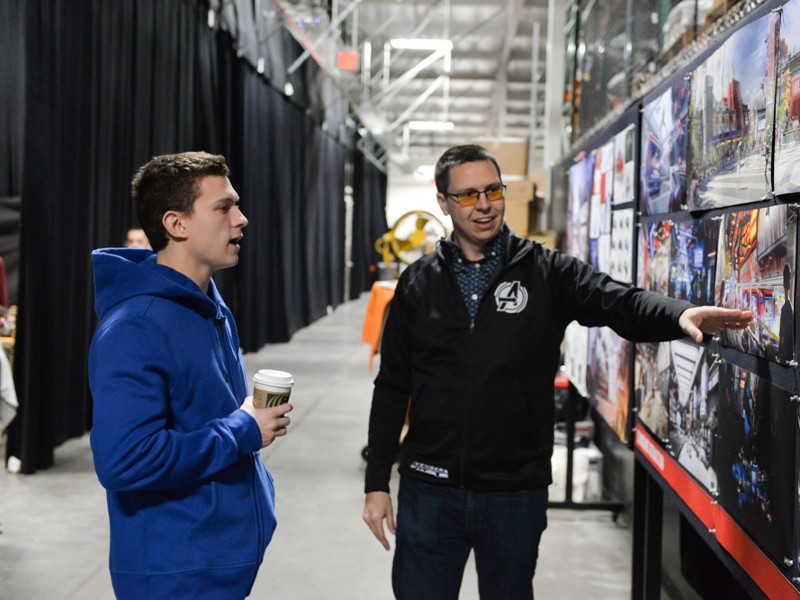 This behind-the-scenes video of WEB SLINGERS: A Spider-Man Adventure shows Tom Holland in action and the part he plays in the attraction.

We still don’t have an opening date for Avengers Campus at Disney California Adventure, but that doesn’t mean Disney isn’t keeping Marvel fans on their toes when it comes to the new Spider-Man attraction.

On Tuesday, Jan. 19, Disney Park Blog shared a brand new teaser for the upcoming ride that not only allows guests to “sling webs,” but also features Peter Parker himself — Tom Holland.

💗Thanks to readers like you, we’re able to bring you news without bombarding you with annoying ads. Please consider supporting us directly by subscribing to our print edition, and make sure to sign up for our FREE newsletter so you never miss out on the latest at Disney World!

We’ve known about the attraction for a while now, but the brand new video below not only teases Holland’s role in the ride but shows off some fresh details we’ve never seen until now.

In the video, you get to see Holland standing in front of a green screen wearing a “WEB” hoodie.

You even get to watch Holland in one of the attraction vehicles “shooting webs” from his wrists and wearing 3D glasses next to two other guests. Based solely on this footage, the ride looks like so much fun.

As Holland explains about WEB SLINGERS, “Peter Parker has started an initiative called WEB, which is the Worldwide Engineering Brigade. And he is giving a presentation on this new piece of tech that they’ve invented, the WEB Slinger vehicle.”

But, Peter’s presentation doesn’t go as planned. In the words of Holland, “He’s gonna be giving people a tour and something goes wrong and he needs everybody to help him out to save the day.”

Holland has been lucky enough to test out the attraction and he makes it sound unbelievable, especially as someone who has been playing Spider-Man since 2016. “For me, personally, that’s the most I’ve ever felt like Spider-Man,” he admitted. “So, everyone is going to get to share that experience, which is so awesome.” 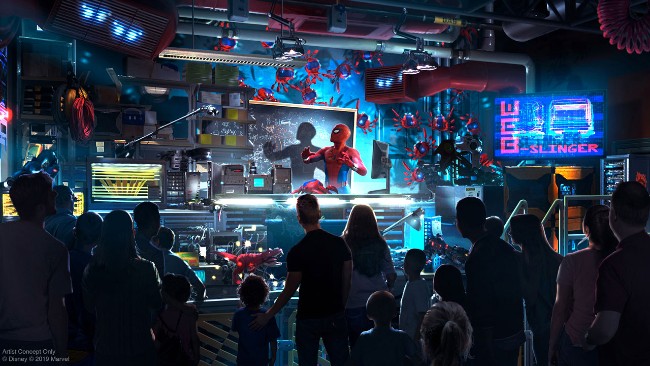 Guests will be able to sling webs just like the Marvel superhero in Avenger Campus’ WEB SLINGERS: A Spider-Man Attraction. Photo courtesy of Disney Parks Blog

Like Holland teased in the above video, guests will have the chance to enter the WEB workshop, which showcases the inventions of Peter and other WEB Tech team members, including Spider-Bots.

Speaking of Spider-Bots, you can purchase one in the Downtown Disney District at Disneyland Resort. These are described as “robotic sidekicks capable of building anything a Super Hero might need.”

During the ride and when Peter’s demonstration goes wrong, “the Spider-Bots are stuck in a replication loop, creating even more Spider-Bots.” Guests will throw on 3D glasses and test-drive the WEB Slinger vehicle in an attempt to help Peter.

“Through specially designed, innovative technology that recognizes body movements and gestures, you will reach out your hands and sling webs from your wrists, just like Spider-Man,” Disney Parks Blog notes.

The attraction will even take guests throughout Avenger Campus locations, including the Pym Test Kitchen, Avengers Headquarters, and the Collector’s Fortress, where  Guardians of the Galaxy – Mission: BREAKOUT! resides.

It definitely sounds like quite the thrill ride. Now, we just wait for an opening date. Avengers Campus was initially set to open on July 18, 2020, but due to the ongoing pandemic, the opening has been delayed indefinitely.

Is it Worth Going to Walt Disney World in 2021?