Today in Disney History, 2017: Magic Kingdom’s First “Happily Ever After” 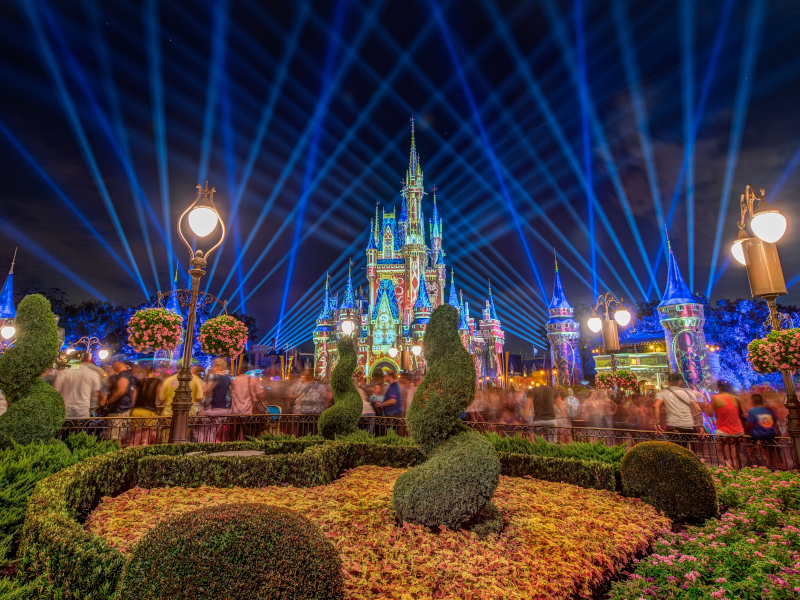 Learn about “Happily Ever After,” the most technologically advanced fireworks show at the Magic Kingdom and Disney World, which premiered on May 12, 2017.

With more lights, lasers, and special effects than any Nighttime Spectacular before it, “Happily Ever After” officially took the place of long-running and fan-favorite fireworks show, “Wishes.” See how much work went into crafting this unique firework experience below!

Time for Something New 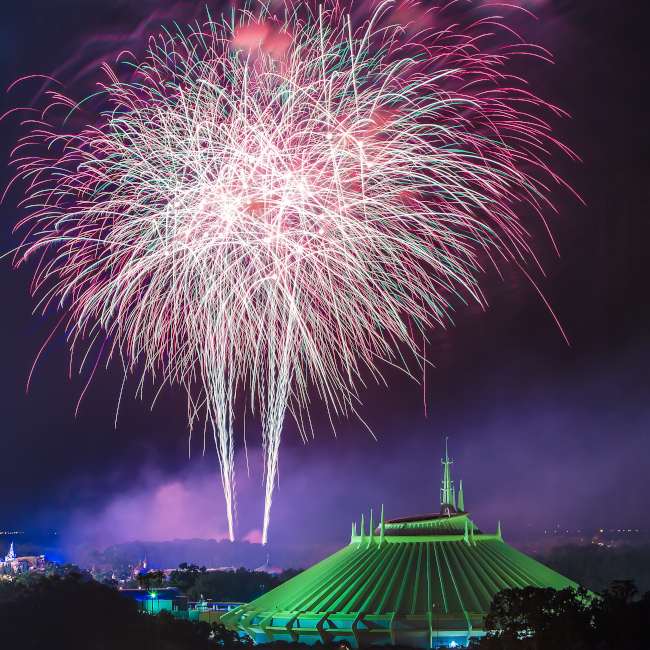 “Happily Ever After” brought projection mapping, lasers, and an all new soundtrack timed perfectly with pyrotechnics to the Magic Kingdom, replacing the fan favorite show, “Wishes.”

“Wishes” had been a nightly staple in the Magic Kingdom since 2003 (replacing the park’s original fireworks show, “Fantasy in the Sky.”)

The soundtrack and lighting on Cinderella Castle featured in “Wishes” routinely pulled at guests’ heartstrings and brought on strong emotional reactions. The show became increasingly meaningful for repeat guests, especially for those who grew up seeing “Wishes” and eventually were able to experience it with their own kids.

Fans packed the Magic Kingdom to send “Wishes” off on its last performance on May 11, 2017, many returning the following day to see the new show and ensure that the “Wishes” replacement would live up to the expectations that had brought them back for the fireworks again and again. 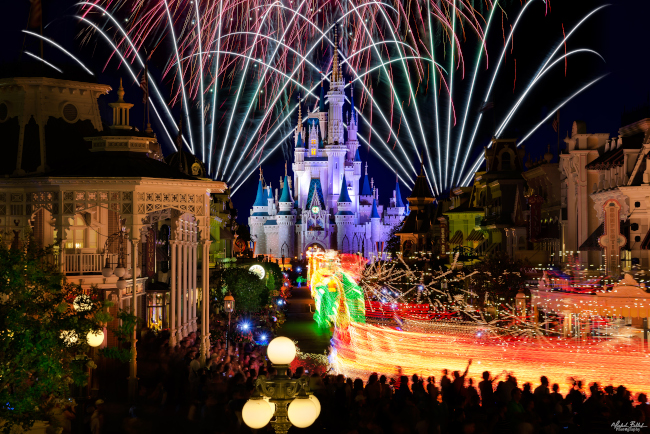 On May 12, 2017, “Happily Ever After” premiered to a sea of fans in the Magic Kingdom, all anxiously waiting to experience the show’s brand-new soundtrack, laser additions, and highly promoted projection mapping technology. While some guests are still nostalgic for “Wishes,” most say that “Happily Ever After” lived up to the hype!

The show is broken down into multiple themes, including: Dreams, Journey, Friendship, Love, Adversity, and Triumph all capped off with a magical finale. Each theme is shown to the audience through different sequences with beloved Disney characters as well as enhanced projection mapping to add to the storytelling and immersion shown right on Cinderella Castle.

“Happily Ever After” features a soundtrack with vocals by Jordan Fisher and Angie Keilhauer accompanied at times by a full orchestra and a 90-voice gospel choir.

Of course, some of the traditions that began with “Wishes” carried over to “Happily Ever After,” most notably Tinkerbell’s flight from Cinderella Castle.

In “Wishes,” Tinkerbell’s flight would almost kick off the performance, timing perfectly with narration introducing her toward the beginning of the show. In “Happily Ever After,” however, Tinkerbell essentially kicks off the show’s finale, flying high above the Magic Kingdom when the lyrics to the soundtrack shift to say, “We all have the courage to fly.”

Tinkerebell’s flight in “Happily Ever After” is followed by the show’s epic finale, which culminates in an array of projection mapping, lasers, and even more fireworks than what had previously been used in Magic Kingdom fireworks shows, all lighting up the sky at the end of a perfect Disney day.

One of the most memorable departures from earlier Disney fireworks shows seen in “Happily Ever After” is the focus on families– all different kinds of families.

While many classic Disney shows focus on general characters and friendships along with romantic relationships (and “Happily Ever After” features those, too), this show shares animated sequences of a variety of familial relationships.

From Tarzan with his adoptive parents to Lilo and Nani who make up a family without parents in the picture, this fireworks show covers a variety of family dynamics. 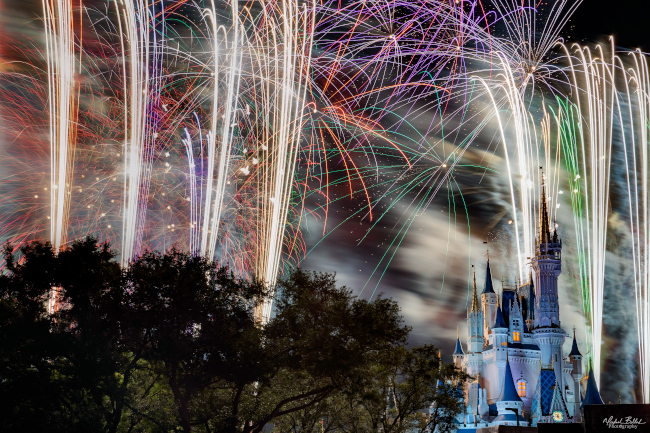 On top of the incredible soundtrack and celebration of diverse family types, “Happily Ever After” features animation and musical numbers from some Disney movies that fans love but that are seldom seen within the theme parks.

A Mulan sequence kicks off one of the most epic portions of the show, and “I Can Go the Distance” from Hercules ties the production together as the performance moves toward its finale, featuring an extremely talented gospel choir.

There are also sequences with newer Disney and Pixar films, including Big Hero 6, Cars, Toy Story, and UP. 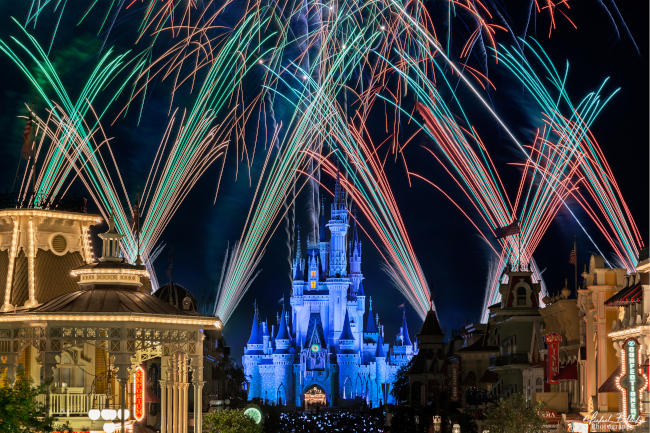 Because of the projection mapping used on Cinderella Castle in “Happily Ever After,” the best place to view the show tends to be in front of the castle, particularly around the hub. If crowds aren’t your thing, you could always head further down Main Street, U.S.A.

While seeing the projection mapping up close can be quite stunning, some guests do not love watching from so close to Cinderella Castle because it can be difficult to get all of the projections and the fireworks in the same line of vision; plus, Tinkerbell’s flight will be pretty quick if you’re too close!

For a last-minute spot, or a more laidback spot if you are hoping to avoid some crowds, Fantasyland behind Cinderella Castle is still a nice place to watch the show. You’ll lose out on the projection mapping as it’s only done on the front of the Castle, but much like with “Wishes,” Fantasyland can be a very magical spot to cap off an evening in the Magic Kingdom with some fireworks.

I love “Happily Ever After” and think the enhanced projection mapping techniques and addition of some new but very much loved characters, plus one of my favorite Disney Park soundtracks of all time, make it one of the best experiences in the Magic Kingdom.