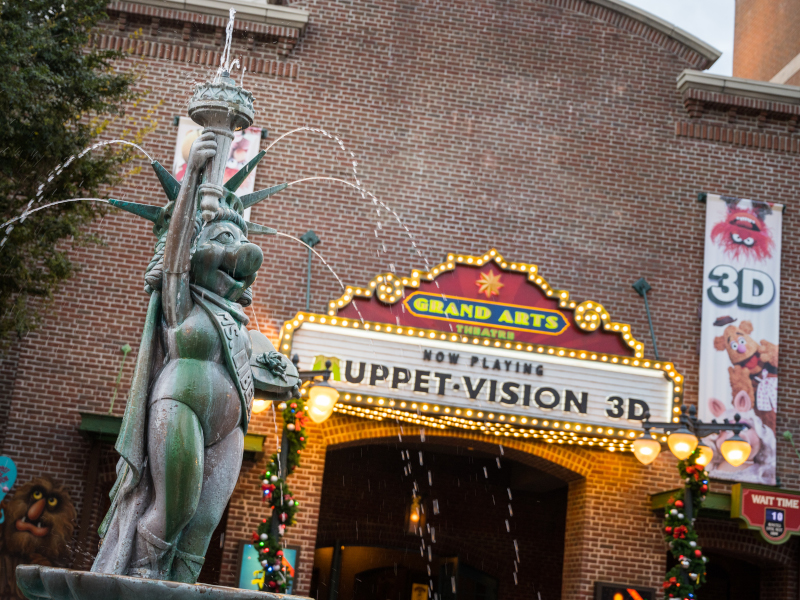 Muppet*Vision 3D opened in Hollywood Studios as part of a grander vision to implement a Muppet Studios area, complete with a themed restaurant and another attraction. But following Jim Henson’s death, these plans faded into oblivion.

Muppet Studios is just one of many Disney Parks ideas that never came about; check out the blog below for some other popular might-have-beens. 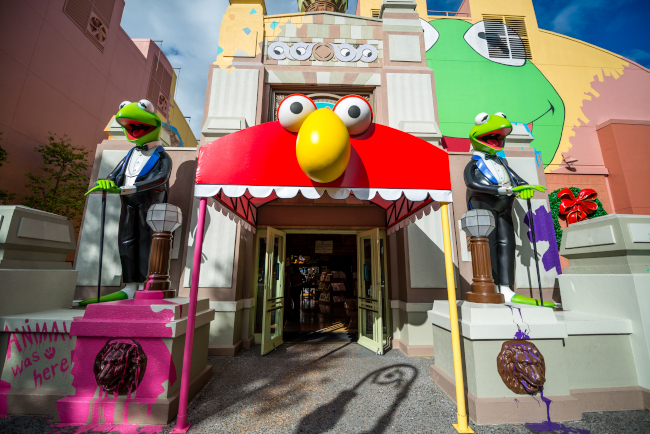 Muppet*Vision 3D today occupies a small corner of Disney’s Hollywood Studios; however; the space around the show was originally intended to encompass a more expansive Muppet-themed land.

During the 1990s, the Walt Disney Company and the Jim Henson Company were planning a merger, and upon this happening, the area around where Muppet*Vision 3D sits today at Disney’s Hollywood Studios would have been further themed to the Muppet universe.

Unfortunately, Jim Henson passed away before the merger and before any additional projects within Walt Disney World came to be, so plans for more Muppet components in the park fell through. (Muppet*Vision 3D was actually the last film that Jim Henson worked on prior to his death.)

Fitting with the rest of Disney’s Hollywood Studios (then Disney-MGM Studios), the Muppet area of the park would have included Muppet Studios along with a Muppet ride and restaurant, plus Muppet*Vision 3D, of course.

Since Disney acquired The Muppets back in 2004, rumors over additional Muppet attractions in the park have been resurfacing. Disney has provided guests with some atmospheric entertainment featuring the characters like the Muppet Mobile Lab in EPCOT and Great Moments in History in the Magic Kingdom; however, additional permanent Muppet-centric attractions have not (yet?) come to be.

The Muppet-themed restaurant did eventually open, sort of, with the addition of PizzeRizzo in 2016. PizzeRizzo opened in Muppet Courtyard as a Quick-Service location serving pizza and select sandwiches and salads, essentially taking over the food menu but changing the theming of the building’s former tenant, Pizza Planet (based on the restaurant and arcade from Toy Story).

PizzeRizzo unfortunately is essentially a seasonal dining location, often either closed or open with limited hours unless it’s a peak season for crowds at Walt Disney World and extra restaurant space is needed. 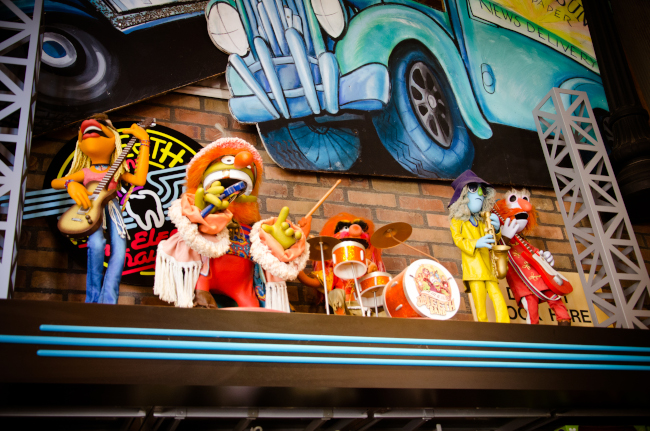 Muppet*Vision 3D may not be part of the originally planned Muppet Studios area of the park, but the show does come with lots of memorable lines, skits, and of course, classic Muppet characters.

The show’s plot focuses on Waldo, “the spirit of 3D” and the first computer-made Muppet. The animated sequences of Waldo may have been created on computers, but live puppeteers did use an actual puppet of the character to show how his movements would work. Animators studied the puppeteers’ movements and created the character digitally from their observations.

In the show’s finale, you can find Muppet versions of some of the dolls from “it’s a small world” in the background (during “A Salute to All Nations But Mostly America”), a small reference to Jim Henson’s love of the classic Fantasyland attraction.

It’s All in the Details 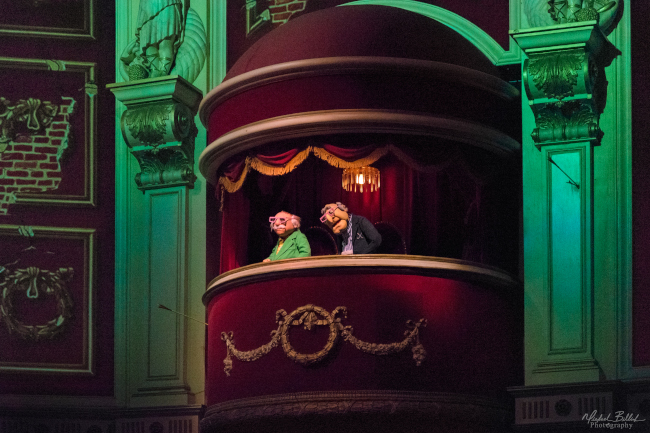 Some of the most memorable details appear to guests before they even enter the theater. If you happen to walk through the queue and see a sign saying “key under mat,” be sure to actually check under the mat: There is indeed a key under there!

There are other fun references in the queue, such as the Statler and Waldorf signage outside of the attraction comparing the show to getting hit in the head with a 2×4 and the net suspended over guests full of Jell-O cubes, which is a punny take on the name of Annette Funicello of Mousketeer fame.

Prior to the show’s ending, Statler and Waldorf “surrender” to the rest of the Muppets, even waving white flags from their balcony seats. A fun fact about the two is that they actually use a third arm to wave the flags. In order for the effect to work visually from the audience, the flags needed to come from a slightly different angle than where their arms would actually fall, so the flag arms are… not attached.

The scene when a wall breaks out in the theater seemingly showing a “live” look at guests in the parks looks a little “1991” to audiences today, but is a fun piece of nostalgia for guests who love to look back at what the park was like in the 90s.

The firetruck in that scene and some of the background imagery was once located in the park; however, it may be unrecognizable today as so much of the area surrounding not only Muppet*Vision 3D but the entire Muppet Courtyard has changed drastically since 1991. We do love seeing those “old timey” Mickey balloons and ’90s fashions, though! 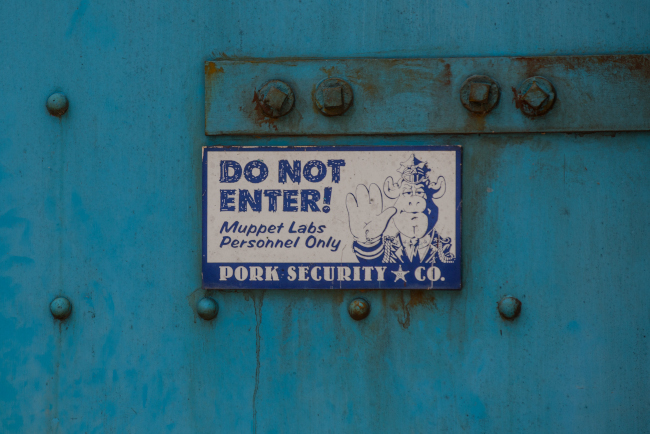 A Muppet-themed land in DHS isn’t the only WDW plan to fall through. Here is just a taste of some of the other attractions that were once rumored for Walt Disney World that never came about: 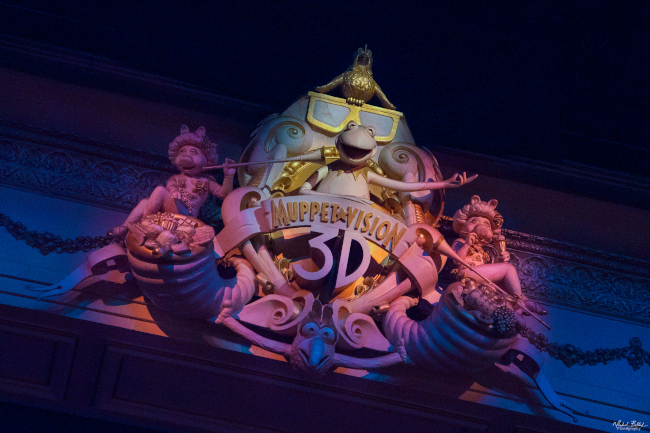 Muppet*Vision 3D never expanded into the full concept for a Muppet land in Disney’s Hollywood Studios but it did eventually have a counterpart at Disney’s California Adventure, and since its opening in 2001, other smaller Muppet attractions have made their way to Disney Parks.

Most notably today, Kermit and Miss Piggy have been some of the fan-favorite topiaries at the EPCOT International Flower & Garden Festival for the past couple of years. And the Muppets finally got a restaurant that would please Sam the Eagle himself with the opening of The Regal Eagle Smokehouse in EPCOT’s American Adventure Pavilion.

With the Muppets remaining steady in popularity over the years and the addition of new entertainment offerings and a second Muppet restaurant in the parks, we can only hope for more of a Muppets presence in the future!