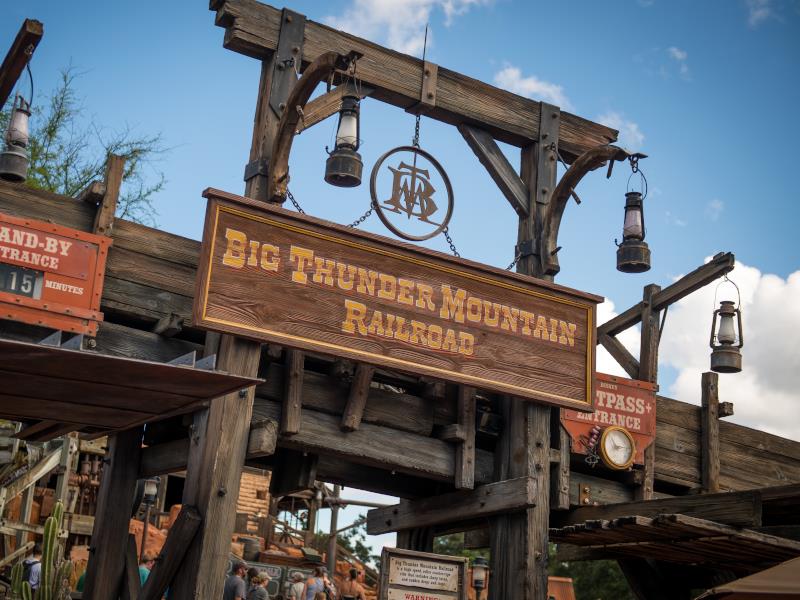 Though Big Thunder Mountain Railroad had technically been running in Magic Kingdom since September, today marked the ride’s official grand opening. Chances are good, you’ve ridden dozens of times since. But how much do you know about its backstory, and have you spotted all the hidden Mickeys?

“The Wildest Ride in the Wilderness!” 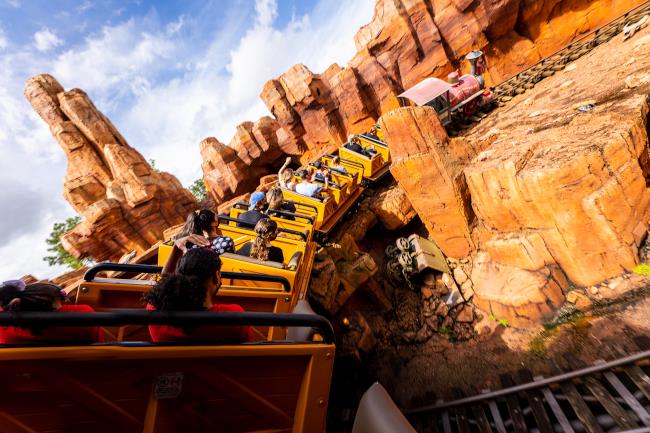 “Are you wearing hats or glasses? Best remove ‘em! Cause this here is the wildest ride in the wilderness!”

If you read this iconic safety spiel just as it sounded on your last Walt Disney World vacation, chances are you are very familiar Big Thunder Mountain, which opened in the Magic Kingdom on November 15, 1980!

Big Thunder Mountain Railroad’s backstory takes Guests into the gold rush town of Rainbow Ridge around the end of the 19th century. The attraction’s theming begins as Guests enter the ride in Frontierland and is enhanced through the various elements in the coaster’s interactive queue.

While wandering through the line to get to the ride vehicles’ loading station, Guests will be able to pick up that they are embarking on an expedition at the height of the Gold Rush. A deeper dive into Big Thunder Mountain Railroad’s backstory reveals that the mountain the miners are taking the train to has actually been cursed by the spirit Big Thunder. 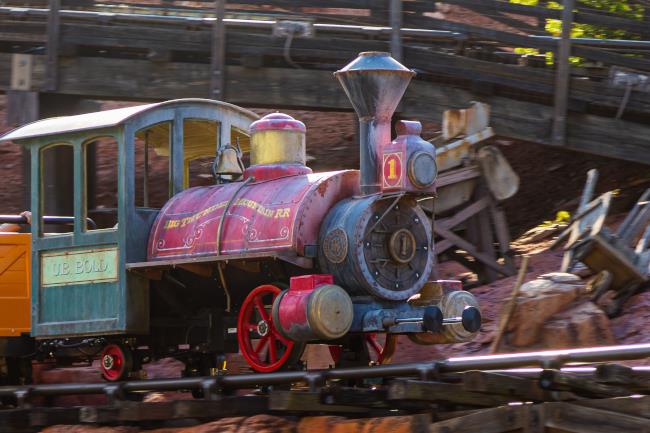 The curse is no joke for miners hoping to strike it rich, as it causes everything from earthquakes to floods. The mine was abandoned as the gold rush came to an end, and the town of Tumbleweed ended up becoming totally deserted.

Years later however, explorers coming through the area noticed trains rushing through the mountain with no passengers on board. Today, Big Thunder Mountain Railroad is not open to miners, but to anyone who is willing to take a spin on the “wildest ride in the wilderness!” 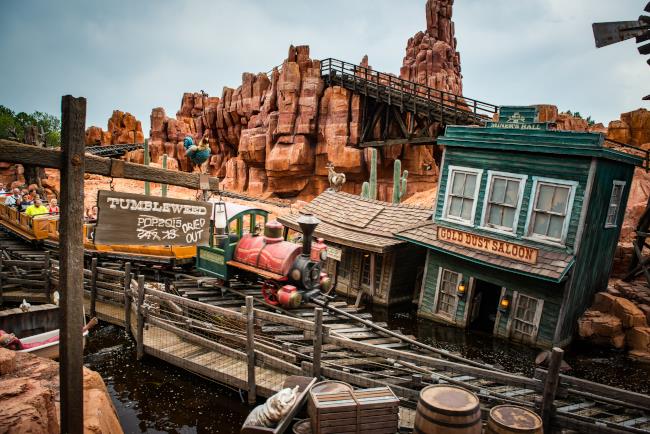 Throughout the queue you will come across signs sharing safety instructions for miners and ads for businesses that once existed in the old mining town, and many of them are loaded with hilarious puns.

An Imagineering favorite is the sign advertising a store in town run by a fellow by the name of “Costas A. Lott,” a nod to the fact that Big Thunder Mountain Railroad was quite an expensive attraction to create and build.

Big Thunder Mountain Railroad reportedly cost about $17 million! That might seem like a lot (well, it is a lot!) but even adjusted for inflation, this is not the most expensive Disney roller coaster ever built.

Adjusted for 2021 pricing, Big Thunder Mountain would cost about $64 million to build today. The most expensive roller coaster at Walt Disney World (and at any theme park) to date was Expedition Everest at a reported cost of $100 million in 2006.

Back to the puns though- The hilarity continues as Guests board the ride vehicles. Each train comes with its own name offering a nod to the courage of those willing to embark on a journey through Big Thunder Mountain with the following initials and last names making up the cars: U.B. Bold, U.R. Daring, U.R. Courageous, I.M. Brave, I.B. Hearty and I.M. Fearless. 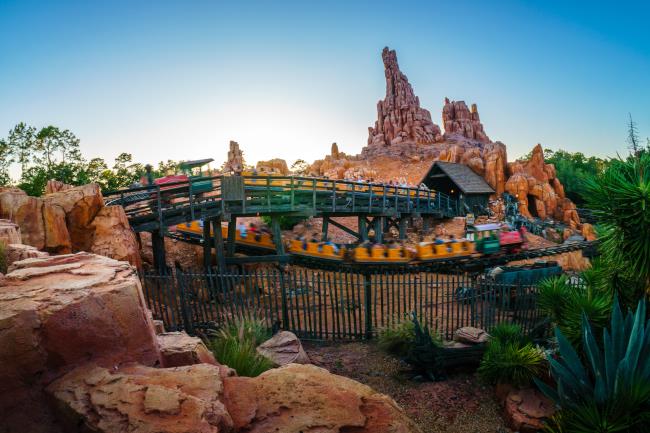 Constructing Big Thunder Mountain Railroad in 1979 was quite the engineering accomplishment. Sitting at 200 feet above sea level, an incredible amount of detail went into designing and constructing a mountain inspired by Monument Valley, Arizona right here in Central Florida.

The mountain was created using a variety of materials that Guests would likely not pick up on at first glance. 6,500 tons of steel were used to create the base of the structure that was then covered in 4,675 tons of cemented mud. On top of that, 4,000 gallons of paint were needed to cover the entire structure and 90,000 gallons of water were used to complete the attraction. 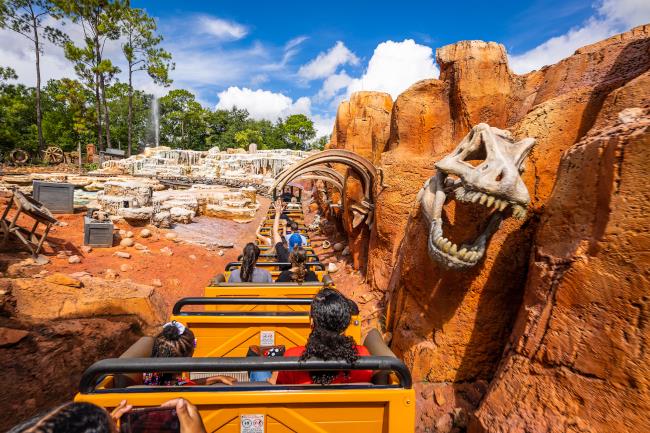 Big Thunder Mountain might take a little courage to ride, but if you find yourself up for it and you love searching for Hidden Mickeys, this attraction has plenty to find both on the ride itself and in the queue.

One of the most popular Hidden Mickeys to spot can be seen in the gears positioned on the ground near the end of the attraction before your train returns to the station. You may also spot on in the cavern as your train begins to go up the ride’s first lift hill (hint- look for its design etched into the walls. This one is almost impossible to see at night!)

We won’t give them all away, but if you are on the lookout for Hidden Mickeys you will also find a couple in the ride’s queue, and if you pay close attention to the exit area you may even stumble upon a Hidden Tinker Bell.

Whether you are in it for the puns, the thrills, or a unique piece of Disney history, don’t miss Big Thunder Mountain Railroad on your next Disney vacation!