Today in Disney History, 1976: America on Parade Ended at Disneyland and the Magic Kingdom 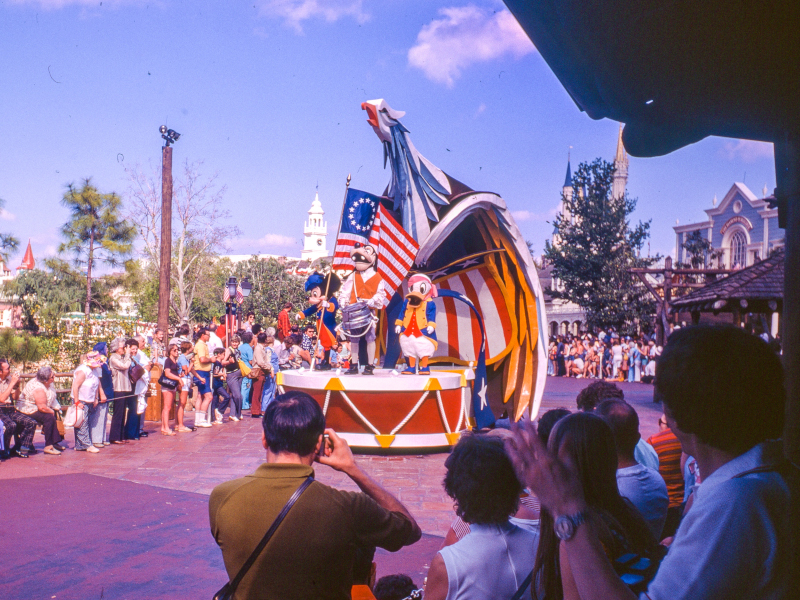 After honoring the US Bicentennial for over a year, America on Parade came to a close at Magic Kingdom and Disneyland. This parade was one of patriotic proportions, with an original song by the Sherman Brothers. Keep reading to see what all this pageantry of patriots offered 45 years ago. 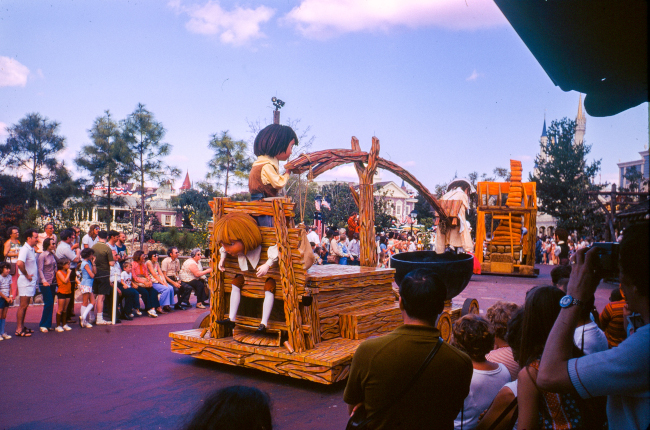 Bicentennial celebrations both in and outside of Disney Parks began in the mid-1970s and lasted through 1976. The celebrations could be felt at both Walt Disney World and Disneyland, and the festivities culminated in the grand spectacle that was America on Parade.

A celebration of 200 years since the country’s founding called for something truly special, and Disney pulled out all of the stops for the occasion. As many as 150 performers marched or danced along the parade route each day of America on Parade’s run, creating an event that was to this day one of Disney’s longest parades at about 30 minutes in length.

The parade’s featured characters (aside from classic Disney characters like Mickey Mouse and the rest of the Fab Five, of course) were made up of large-scale dolls known as the “People of America.” The dolls themselves were large-scale character costumes that stood 8 feet in height and accompanied a record-breaking 50 floats through the parade route.

Each sequence in the parade represented a major milestone in American history in line with views from the time (for instance, Christopher Columbus would likely not be celebrated in such a way today, but for a 1976 parade of this theme, it is not surprising that his voyage was included). 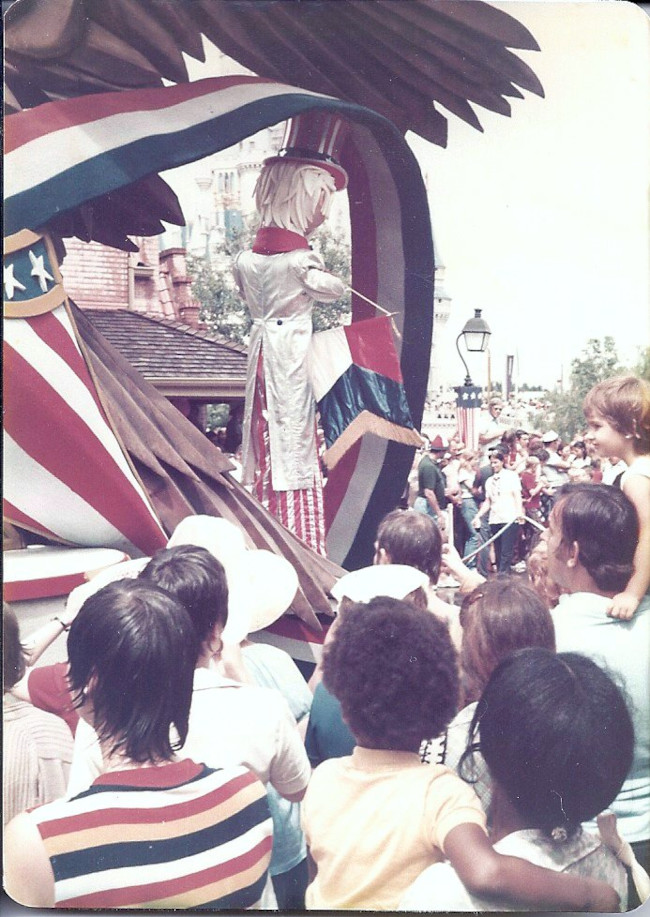 Major sequences focused on early patriotism with representations of the first Thanksgiving, Betsy Ross sewing a flag (on a two-story tall rocking chair, of course), the Liberty Bell, the Statue of Liberty, and even much later nods to American pop culture with record players, an iron, and a giant sandwich float. (Did these come straight outta Pop Century or what?)

An entire section of the parade was devoted to western expansion, with Mark Twain seated atop a riverboat, stagecoaches, saloon girls, and a look at the early American railroad.

Literary representations also made their way into the parade with characters from Tom Sawyer, as well as later achievements like the flights of Charles Lindbergh, which were included in a show unit called the “Creations of America.” 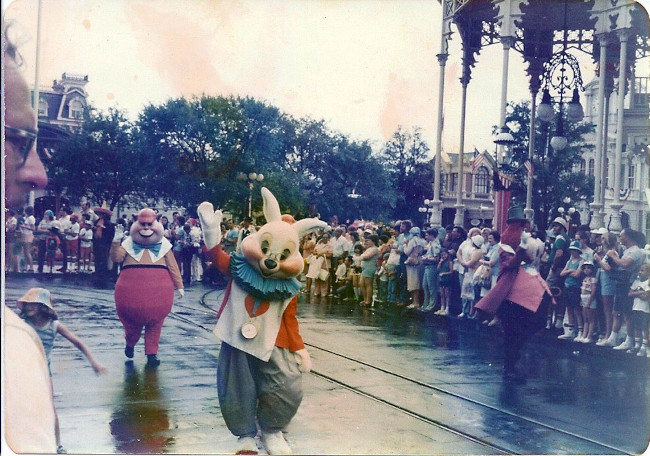 Richard and Robert Sherman took Jani’s “America on Parade” concept and set the music to it, bringing their unique brand of classic Disney music to the spectacle.

In addition to classic tunes you may have expected like “America the Beautiful”, “Yankee Doodle”, and “This Land is Your Land”, the Sherman Brothers created the original song “The Glorious Fourth” specifically for the parade and other bicentennial events around Disney Parks. 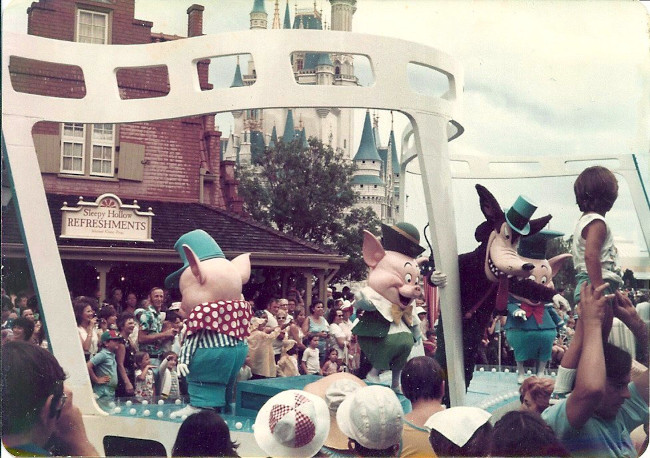 Disney’s America on Parade was generally well received and, as a result, spawned perhaps more parade-specific merchandise and souvenirs than we have seen in a Disney Park since then.

Disney sold souvenir books and postcards, sharing the design and inspiration for the People of America costumes and the historic events featured in the parade. Disney also created gifts like flags and mugs with America on Parade artwork to continue to celebrate the festivities.

Like Disney World merch? We may not have America on Parade mugs, but we did just restock our shop with Haunted Mansion buttons, which sold so fast that we’d been sold out for some time. Get these buttons now before the Grim Grinning Ghosts slip through your fingers again.

🛒 Add our Haunted Mansion buttons to your cart … if you dare 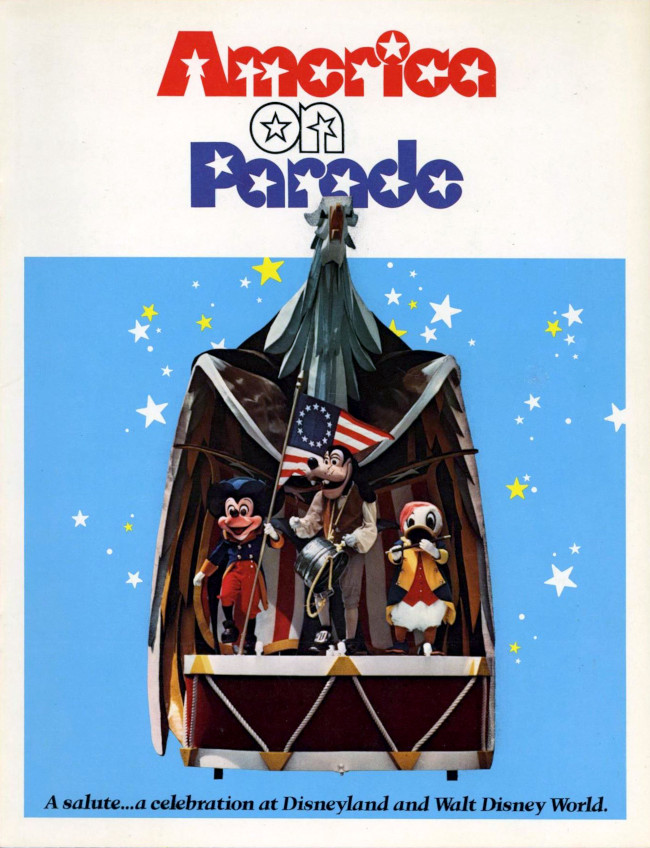 Families at home who were unable to make the trip to either coast to visit a Disney Park were also treated to a televised event showcasing the parade, titled “Walt Disney’s America on Parade,” which aired prior to the production’s final run in 1976.

The special was hosted by Red Skelton, the famed TV host, entertainer, and radio personality, who kept audiences enthralled with his reports of each float even while they were thousands of miles away watching from home.

Long after its final run, the America on Parade logo found its home in an EPCOT exhibit at The American Adventure. Photo courtesy of Steven Miller

By the time the conclusion of America on Parade took place in September 1976, it is estimated that the parade was seen by about 25 million guests from around the country (an interesting comparison when you consider the fact that other patriotic attractions saw less visitation that year).

For reference, Independence National Historical Park saw just shy of 4 million visitors that year, and to this day, sites like Boston’s Old North Church only see about 150,000 visitors annually.

When America on Parade came to an end, many of the floats were dismantled and recycled for other projects around both Disneyland and Walt Disney World.

The “People of America” characters were set aside in storage until they made a later appearance at Walt Disney World shortly after EPCOT’s opening in 1982.

In the early days of World Showcase, the characters could be spotted in new costumes themed to each of the countries where they walked around and interacted with guests.

Disney’s America on Parade serves as a truly classic piece of theme park nostalgia in the form of a grand spectacle that is unlike anything we’ve seen in the parks in recent years.

We hope this post sparked your interest in one of Disney’s most fascinating parades to date or perhaps even brought up some memories if you were able to see the parade in person!