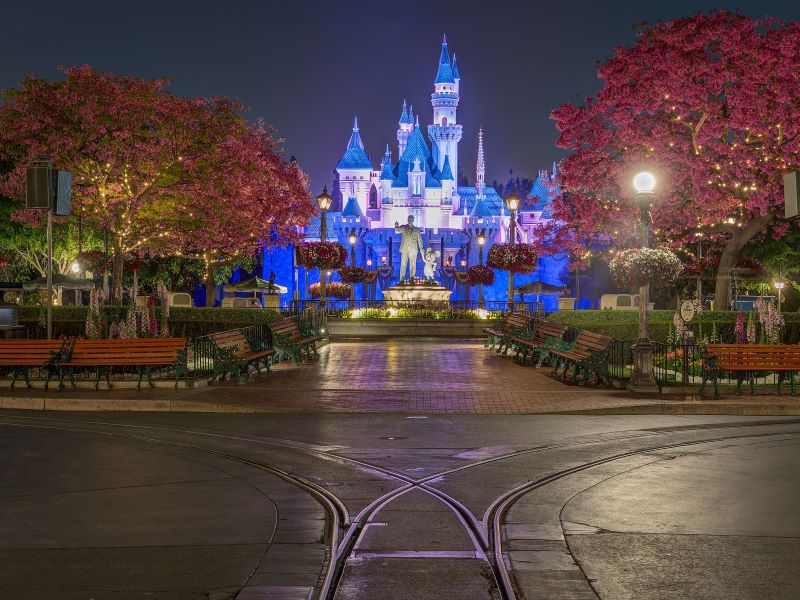 Disneyland’s opening day was no small event. Everyone from Ronald Reagan to Thurl Ravenscroft made an appearance, and 90 million viewers watched live coverage on TV. But as magical as we imagine that first day being, the opening of Disneyland was actually fraught with hiccups that only a man like Walt could overcome. 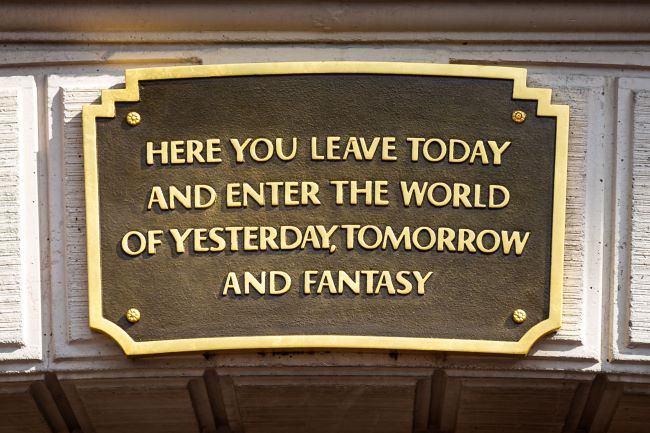 Disneyland’s opening came to the surprise of financial experts who could not imagine Walt Disney’s vision for the park. Most amusement parks of the time were exactly what Walt did not want Disneyland to be, often dirty and not quite welcoming and family-friendly. With these impressions in mind, financial officials believed a film studio’s endeavor into the amusement industry would only lead to financial ruin.

Between Walt and his brother Roy, Roy managed the park’s finances. Before construction on the park could begin, Roy secured a $9 million loan from New York bankers using a sketch of the park by artist and Imagineer Herb Ryman to convince the organizations to provide funds.

The $9 million loan was supplemented by $5 million in loans and investment bundles sourced through a partnership with ABC. You may recall Disney’s 1-hour weekly show promoting the upcoming park, simply called Disneyland.

The partnership with ABC not only gave the Walt Disney Company much needed funding to work on the project (which would in total come to $17 million for the construction of Disneyland), but it also provided audiences across America with knowledge of the park and, more importantly, a desire to visit and see it for themselves.

Construction only began one year prior to the park’s opening. Setting up the foundation for the park was no easy feat, as the land was originally an orange grove nestled between Anaheim’s growing downtown.

With the ABC program promoting the project on national television, and investors waiting for their returns, construction had to be rushed to reach the company’s projected opening day. 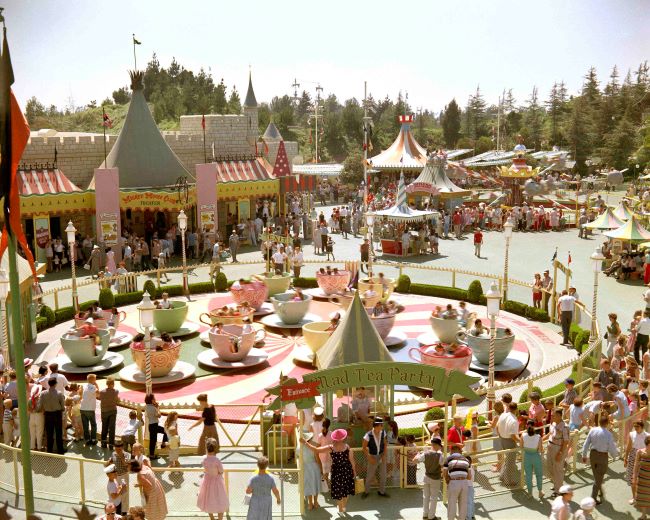 Imagineers (then called WED Enterprises) worked around the clock to put the finishing touches on Disneyland and ensure that each of the lands guests were familiarizing themselves with on TV would be ready to go on July 17.

On top of Walt’s asks of the Imagineers, the company ran into a number of issues with vendors and third-party contractors that made finishing the park by mid-July 1955 even more difficult.

A local plumbers’ strike caused a number of issues during construction. With limited plumbers available to work on the park, Disney had to decide which areas of plumbing were necessities for opening day and which areas could be completed later.

The outcome of the plumbers’ strike ultimately resulted in limited drinking fountains around the park and long lines for restrooms as not enough of them were built by the time July came around. Some media outlets even accused Disney executives of intentionally limiting water fountains so that guests would be forced to buy drinks in the park.

Another consequence of rushed construction was found in the park’s concrete, some of which was poured so close to the opening that it did not have time to fully set. As a result, women who wore heels to the park during its opening sometimes found themselves sinking into the concrete, while other guests who sat on benches found their seats sinking slightly as well. 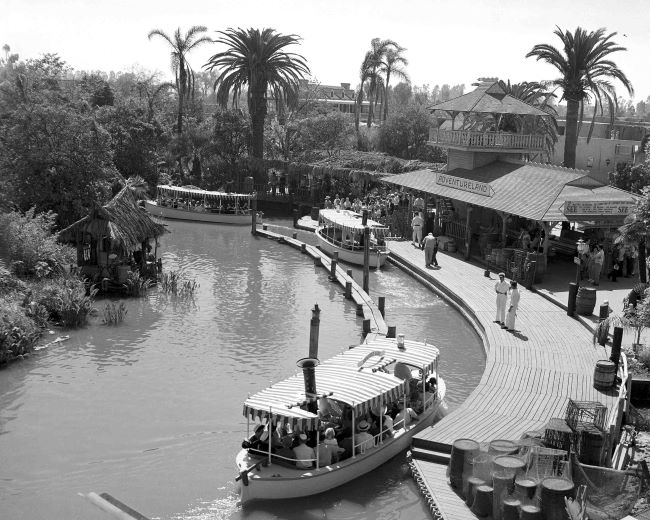 The puns on Jungle Cruise have been alive since Disneyland’s opening day. Photo courtesy of Disney

The rushed construction of Disneyland only accounted for a portion of the setbacks that took place on opening day.

First, it should be noted that the entire event was televised, and thanks to Disney’s partnership with ABC, the event was aired nationally to an audience of about 90 million home viewers.

Counterfeit tickets were widespread, which caused the 15,000 planned attendance to nearly double to approximately 28,000. Traffic to drive to the parking lot outside of Disneyland was backed up for about 7 miles, and arriving at the gate took so long that a number of guests hopped out of their cars on the highways to go to the bathroom.

The extra guests caused Cast Members to struggle to balance occupancy of attractions, which led to lengthy ride breakdowns and reports of overcrowding. One such overcrowding incident the media highlighted when reporting on opening day was the Mark Twain Riverboat, which at times took on water due to the weight of so many guests forcing their way on board.

The large media presence also caused areas of the park to be blocked off for guests so that they could complete their broadcasts, which quickly created bottlenecks and even larger crowding issues.

Despite the obvious difficulties, high-profile celebrities of the time, including Ronald Reagan, who reportedly needed to scale a wall in Frontierland at one point to make it into the broadcast on time, did what they could to present a positive image to everyone watching from home.

At the end of the day, many guests simply found themselves frustrated. With some Disneyland attractions (including classics like Dumbo) not quite ready for opening day and the added frustrations from the counterfeit tickets and bottlenecks throughout the park, many felt as though they spent hours in traffic only to find little to do.

The media took notice and often referred to the opening of Disneyland as not Walt’s dream, but a “nightmare.” 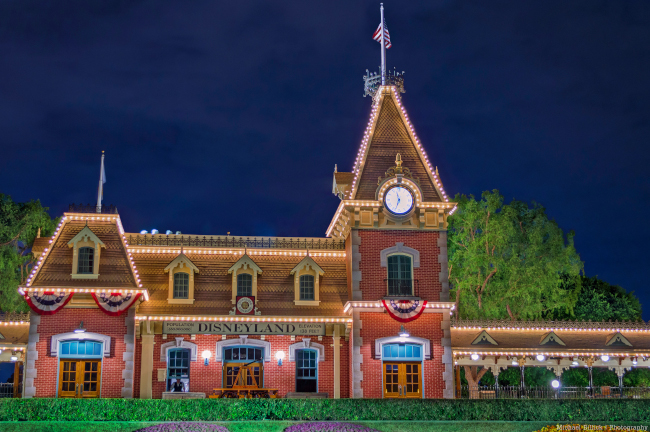 The train station at Disneyland. Photo by Mike Billick

Of course, most of the general public was aware of the difficulties that plagued Disneyland’s opening day. Still, public reception did not waiver as one might have expected, and attendance grew steadily in the park’s early years, giving the company the profits needed to expand upon the park’s attractions that were not ready for opening.

Walt met with members of the media in the days and months that followed the park’s opening, acknowledging the day’s problems and sharing that they indeed had a lot to learn about the running of a theme park.

He still provided the needed reassurance, however, that swayed later reviews of the park and encouraged guests who were on the fence to experience Disneyland for themselves.

Today, Disneyland remains one of the most visited theme parks in the world. Since Walt’s time, it has seen large-scale expansions, including an additional park with Disney’s California Adventure, three resorts, and Downtown Disney.

Of course, it also inspired Walt to move his theme park dreams to Florida, leading to the opening of Walt Disney World in 1971. Now the Walt Disney Company is as much a theme park organization as it is a film and animation studio, a fact that would likely have shocked the doubters of Disneyland’s success prior to its opening.

*You may have noticed in the magazine that we accidentally said Disneyland opened in 2007. We think Doc let Sleepy do the final review before going to print. Major whoops! Thanks to the eagle eyes who helped us catch this goofy mistake; it’s been updated in our digital edition.

How To Get BANNED From Walt Disney World