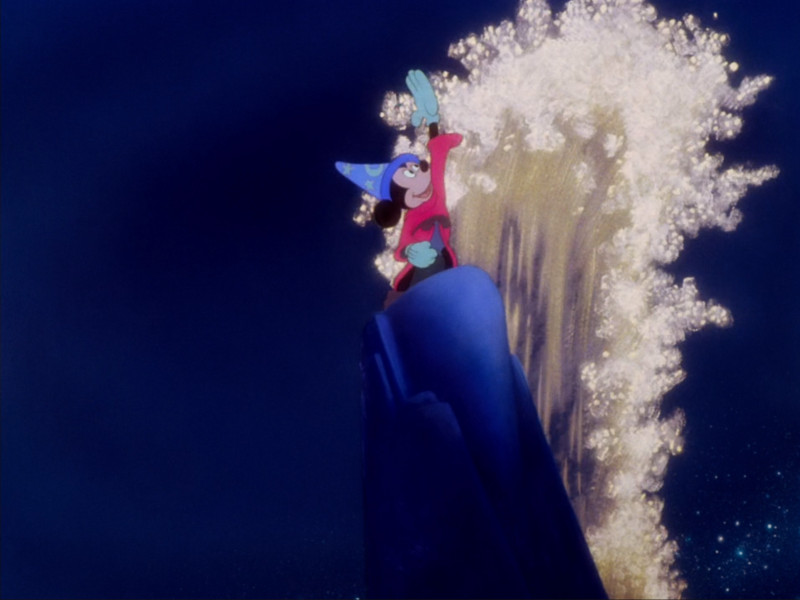 On November 13th, 1940, Fantasia was released in theaters as a bold, innovative roadshow that introduced the world to abstract themes and Stereo sound.

You may think of Sorcerer Mickey as the conductor in Mickey’s PhilharMagic at the Magic Kingdom. You may have even met him in his Sorcerer’s Outfit at Hollywood Studios, but his inception was announced in the third Disney animated film to ever be created…

And that is this film which we are celebrating today: Fantasia!

Fantasia released in theatres on this day, November 13th, in 1940 in New York City, introducing the world to, in my humble opinion, the very best Mickey of all time.

Featuring eight animated segments—seven of which are performed by the Philadelphia Orchestra and preceded by a live-action introduction—Fantasia offers a unique blend of fantasy and shows us the ‘man behind the curtain’ so to speak that no other film in Disney history has before.

Uncle Walt, is That You?

That eyebrow raise? All Walt. Animation courtesy of Disney

If you’ve noticed a similarity between Walt Disney and the Sorcerer in The Sorcerer’s Apprentice segment, you may be on to something.

While the likeness of the Sorcerer is technically born from silent film actor Nigel De Brulier, he wasn’t the only inspiration for the character.

The very distinct facial expressions of the character, whose name is Yen Sid – Disney spelled backward—were quite familiar to those who knew Walt the best.

Specifically, the raised eyebrow (which I myself have seen in photos of Walt Disney) was an impression Disney was often seen wearing, along with his genuine, kind-hearted smile of course.

Speaking of likeness, Walt decided to bring in a large group of graceful ladies to be live-action models for the Dance of the Hours and Night on Bald Mountain scenes!

The Ballet Russe de Monte Carlo was hired by Disney himself and included acclaimed dancers such as Tamara Toumanova and Cyd Charisse.

Only Disney can take clumsy animals such as ostriches, alligators, and even a hippo and turn them into elegant prima ballerinas.

Fantasia included many abstract representations of the symphony it visualized. Animation courtesy of Disney

Imagine clocking into your place of employment and having total, free reign of your tasks.

Even for those who have our dream jobs (as I’m sure Imagineers and Disney creatives for decades have felt), this can seem a bit out of reach.

But the dreamers who imagined Fantasia had just that—and in color!

The color scheme of the entire feature was fair game for the artists. This may seem like a small detail, but to an artist, freedom to paint with all the colors of the wind can be a dream come true.

The animators were given the opportunity to interpret the music of the film as they pleased, pushing the art of animation to new levels with abstract visuals and fantastic setpieces.

The Sound of Innovation 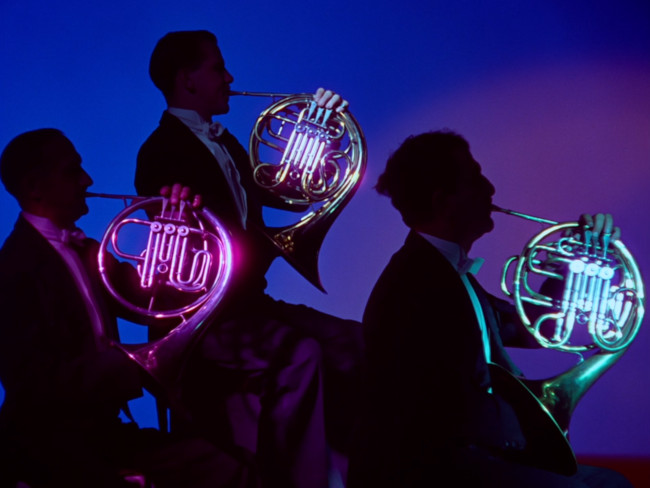 When Fantasia first released it was a theatrical roadshow, making stops in 13 cities nationwide. In true theater form, there was an intermission and complete symphony, but there were no players or instruments to be seen.

Fantasia’s original roadshow release was in Fantasound, an early form of Stereo.

Theaters today are well known for their extravagant sound systems and thunderous subwoofers, but back when Fantasia came into the scene, there was only flat Mono.

With the advent of Fantasound, Disney launched into the experimental world of surround sound. Five speakers, two in the front, two in the back, and one in the center, replicated the experience of attending a true symphony.

Instruments moved around the room, characters could be heard as they moved around the screen, and Walt Disney took audiences into a fully immersive, Fantasmic world the likes of which had never been heard.

So, if you enjoy your surround sound television or movie theatre experience, be sure to thank Disney and RCA engineers for that!

What Walt Disney and friends did with this symphony for the eyes and ears is one that, regardless of all the amazing techniques, sound equipment and out of this world animation, can never be recreated.

When Fantasia released in theaters, it not only resuscitated the landmark Disney icon of Mickey Mouse, but it materialized a whole new Mickey that so many of us have come to know and love.

Much like Mickey in the Sorcerer’s Apprentice in Fantasia, our favorite mouse overcame hardship and brought even the most seemingly mundane things to life once again.