Today in Disney History 1993: The Nightmare Before Christmas was Released 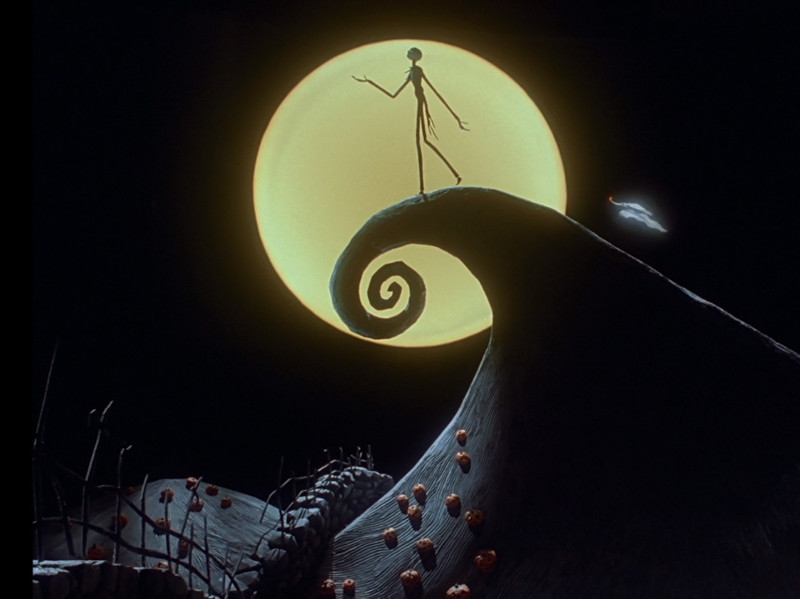 Today in Disney history, October 29th, 1993: The Nightmare Before Christmas released in theatres across the nation, and has since grossed over a whopping 90 million dollars.

It’s fair to say that there is no seasonal movie quite as perfect as Tim Burton’s, Touchstone Pictures, and Disney’s The Nightmare Before Christmas.

Jack in all of his flawed well-meaning-ness; prophetic, gentle Sally; and even the lighthearted yet terrifying Oogie Boogie make this film an empathetic timeless classic.

The “Jack” of All Trades 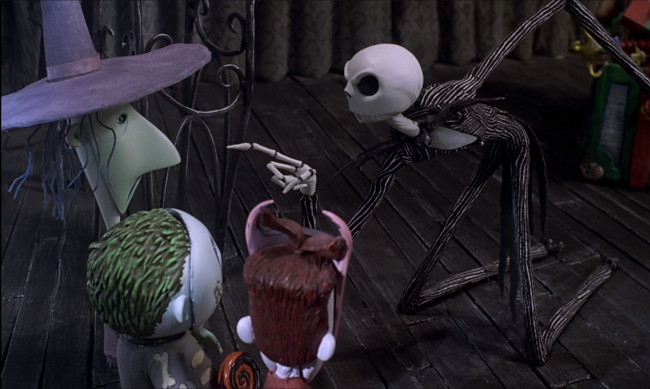 You could say Danny Elfman was talking to himself here. Image courtesy of Disney

The Nightmare Before Christmas simply wouldn’t have been the emotional tale of self-discovery had it not been for the genius musical composition of Danny Elfman.

And while Chris Sarandon voiced the speaking role of the pumpkin king, Elfman took on the singing part of Skellington for a little extra razzle-dazzle.

Elfman also voiced the characters of the clown with the tear-away face and Barrel from the naughty kid trio Lock, Shock, and Barrel.

Continuing with the Disney family, since 1993, Elfman has become the king, so to speak, of the live-action genre working on films such as Dumbo, Oz the Great and Powerful, Alice Through the Looking Glass, and even Avengers: Age of Ultron.

Along with his musical talents, he truly is a vocal chameleon.

Related: Disney and Danny Elfman: You Know, Besides Jack Skellington

NBC Started as a Poem 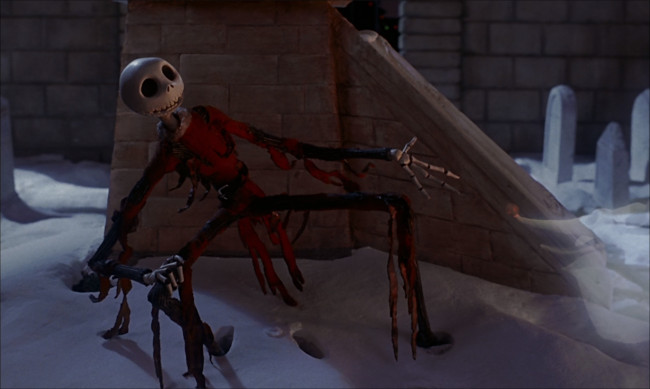 Who would have guessed that this thrilling festive tale all began with only three characters?

That’s right, The Nightmare Before Christmas was originally a poem written by Tim Burton back when he was a Disney animator.

The poem included only the characters of Jack Skellington, Zero, and Sandy Claws, the essence of the story including Jack’s existential crisis, in this reimagining of the classic Twas the Night Before Christmas.

You can read the entire poem here, but this is our favorite excerpt about poor Zero:

Then out from a grave, with a curl and a twist,

It was a little ghost dog, with a faint little bark,

And a jack-o’-lantern nose that glowed in the dark.

It was Jack’s dog, Zero, the best friend he had,

But Jack hardly noticed, which made Zero sad.

The Dark Side of Disney 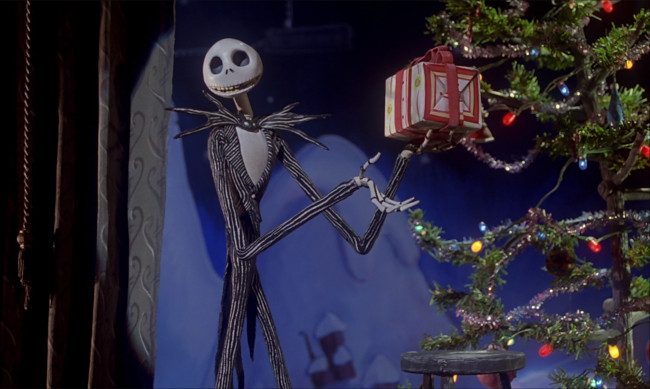 When I think of The Nightmare Before Christmas, my mind automatically goes to it being a Tim Burton film, mostly because of the distinct claymation/animation style.

While many of us view it as a Walt Disney Pictures film – and it is – Walt Disney animation made the decision to release it under their mature label, Touchstone Pictures.

The Nightmare Before Christmas is certainly juvenile enough, especially by today’s standards to be classified as children’s movie.

But the Walt Disney Company was worried the story and imagery was a bit too dark and spooky for little ones and played it safe by releasing it under Touchstone.

Related: Frankenweenie: the film so scary, it got Tim Burton FIRED from Disney.

The Halloween/Christmas Debate is settled! 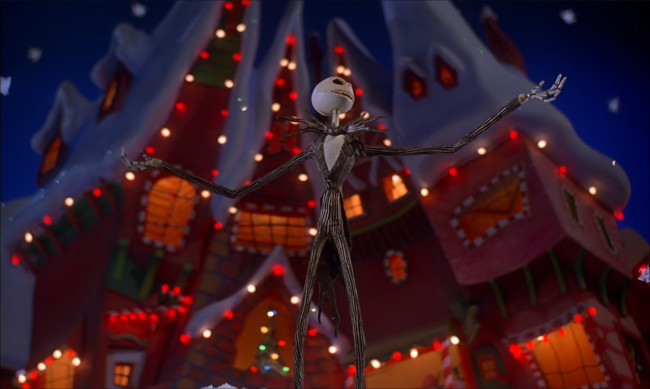 Editor’s note- I still consider it a Christmas movie. Image courtesy of Disney

There may be an ongoing debate as to whether Nightmare is a Halloween or Christmas film, but the director of the film has since brought new insight to the discussion.

Personally, I’d watch this movie on Arbor day, Easter and every holiday in between, but if pressed, I’d say it’s Halloween at the core.

And I’m not the only one who thinks that. In an interview at the Telluride Horror Show Film Festival in Colorado, The Nightmare Before Christmas director, Henry Selick, noted that the film was indeed intended to be a Halloween film.

Combined with the fact that the story takes place in Halloween Town and centers around the Pumpkin King and most of the characters being spooky in nature themselves, I would say this pretty much tracks. 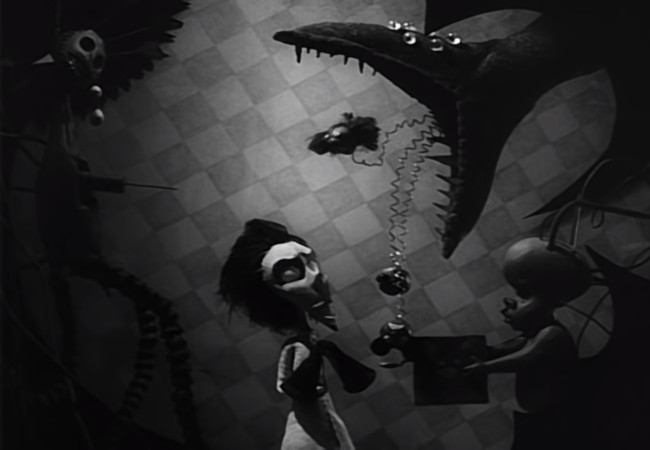 An early version of Jack Skellington (left) can be seen in Burton’s 1982 short Vincent. Image courtesy of Disney

It’s easy to dream about what might have been, and in the case of The Nightmare Before Christmas, we actually have the chance to know some of the original plans (most of which you can hear on the DVD commentary) for our favorite residents of Halloween Town.

It was a TV Special

The first, and one of the bigger changes, was that The Nightmare Before Christmas was intended to be a television special, much like Jack Frost, Rudolph the Red-Nosed Reindeer, and other holiday features.

As the years went on, Burton continued fine-tuning the story and the medium until we have the cinematic version we see today! 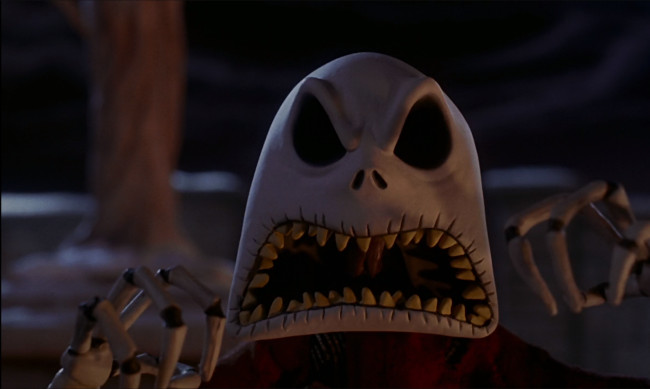 Jack with eyeballs would have been far scarier than the empty sockets. Image courtesy of Disney

Another version we never saw was the one where Jack’s suit was entirely black, and where Jack was planned to actually have eyes rolling around in those big sockets!

Henry Selick saw the original shots where Jack was clad in all-black and decided that adding pinstripes to his suit would make him pop more on screen. We can all agree that this was a great change.

But then what about those eyes? After Disney decided it was too far off their map to be released under the Disney name, they continued offering notes.

One of which being that Jack needed a pair of eyes to sit within the empty, hollow sockets we know and love.

Maybe they didn’t understand how skilled the animators were in conveying emotion with just empty eye sockets, or they were afraid the imagery would be too creepy? Either way, Henry Selick and Tim Burton got the last word and let their animation prove their point. 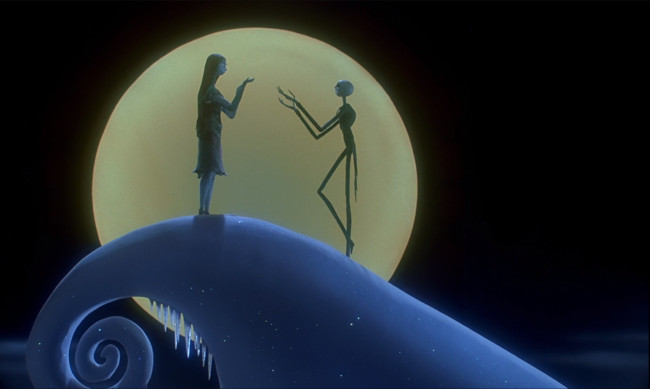 Always meant to be… Image courtesy of Disney

Tim Burton, along with the magic of Disney, has given us dark Disney dreamers a totally unique lens to view storytelling, and The Nightmare Before Christmas truly is the perfect trifecta of imagery, music, and recitation.

Hocus Pocus and The Nightmare Before Christmas are the two films I always watch on Halloween night and have been a staple of my love for the Disney spooky season for decades.

We can now meet Jack and Sally at Mickey’s Not So Scary Halloween Party, experience the holiday overlay on the Haunted Mansion at Disneyland, and simply await trick-or-treaters dressed as Jack and Sally whilst watching the film at home.

The Nightmare Before Christmas has taken us beyond the film and the parks and has burrowed its way into our hearts and, no doubt, will for years to come.