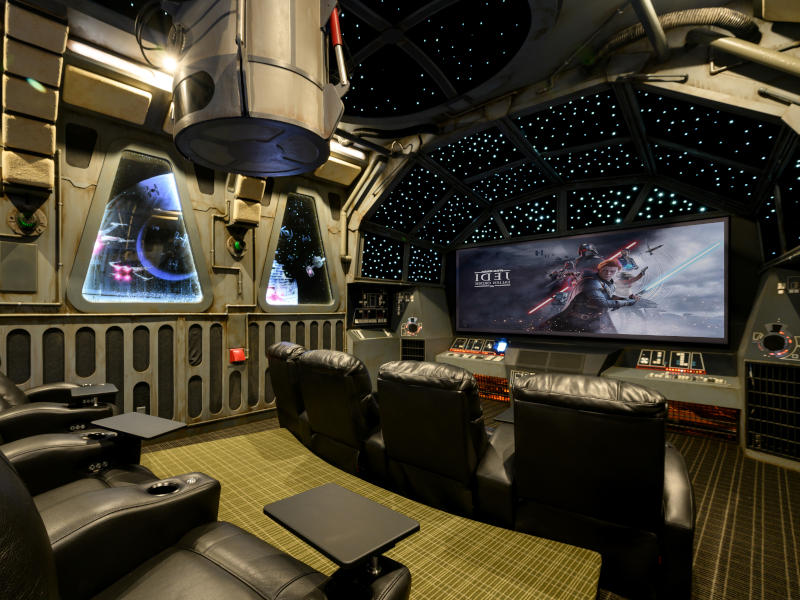 Chewie, we’re home! If you’re a fan of the original Star Wars trilogy, you’ve got to see the home theater inside this Disney Golden Oak Star Wars House.

But that’s not all. As is customary with all Golden Oak homes, this house (currently on the market for $15M) is filled with the kinds of Disney details that dreams are made of.

So, what are you waiting for? Keep scrolling to get a look inside a real Disney Golden Oak home. 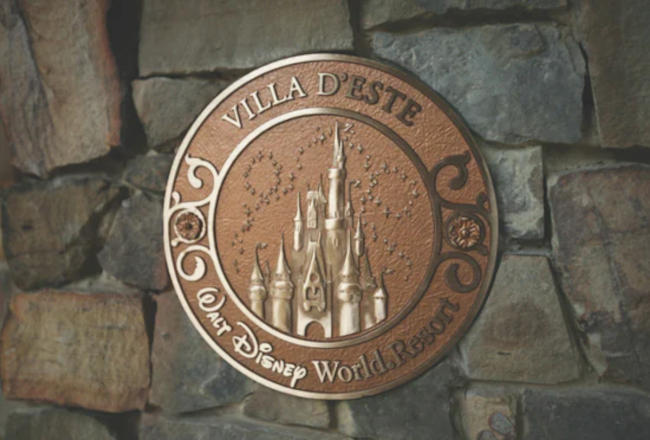 There’s a customized medallion on the exterior of every Golden Oak home. Photo courtesy of Disney Parks Blog

We’ve reported on Storyliving by Disney’s new community out in California. But what about actually living at Disney World. Welcome to Golden Oak.

Designed by Walt Disney Imagineering, Golden Oak at Walt Disney World Resort is a private, luxury residential community in Lake Buena Vista, Florida. Every home has been designed with Disney in mind, from the enchanting stained glass windows to the customized medallion on the exterior of every Golden Oak house. Even the community name pays homage to Walt Disney’s Golden Oak Ranch in California.

When it was first announced by Disney Parks Blog back in 2011, it was described as “an unprecedented opportunity to buy a home at the Walt Disney World Resort.” Boy, were they right! Just take a look at these photos taken inside a $15M Golden Oak estate. 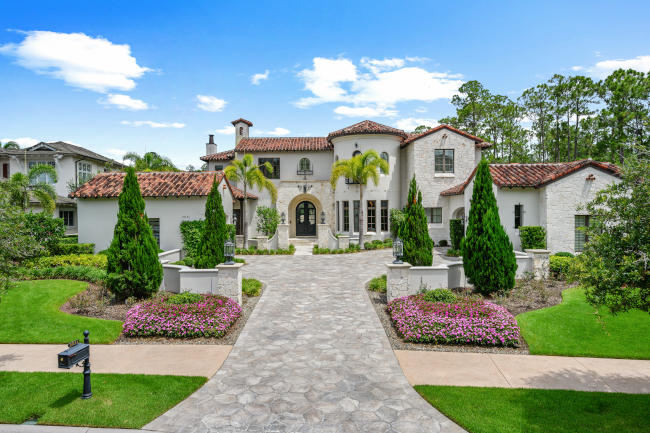 This $15M Mediterranean-style Golden Oak estate is located at 10151 Enchanted Oak Drive. Even the street name is magical! You’ll find this home in the Carolwood neighborhood. Disney historians might recognize Carolwood as the name of the private railroad that Walt Disney operated out of the backyard of his Los Angeles home.

At nearly 11,000 square feet, this home is full of Disney charm. It was designed by real Imagineers and architects, after all! 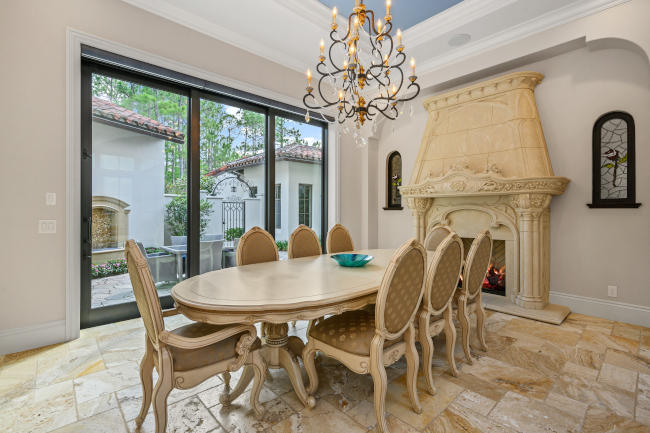 Before we even get to the Star Wars movie room, we have to talk about the marble fireplace. Besides being absolutely beautiful, it’s actually an exact replica of the fireplace you’ll find in the Cinderella suite above Cinderella Castle in Magic Kingdom. 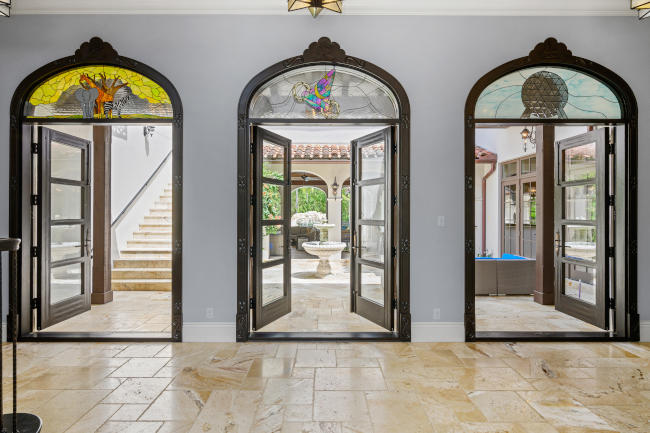 There’s also a row of custom Disney-themed stained-glass windows overlooking the courtyard and pool. The designs feature an Animal Kingdom safari, Sorcerer Mickey hat, and Spaceship Earth. Don’t these windows remind you of the ones at Cinderella’s Royal Table?

We think one of the property’s most exciting features is the ability to watch EPCOT’s Harmonious fireworks show without ever leaving home. 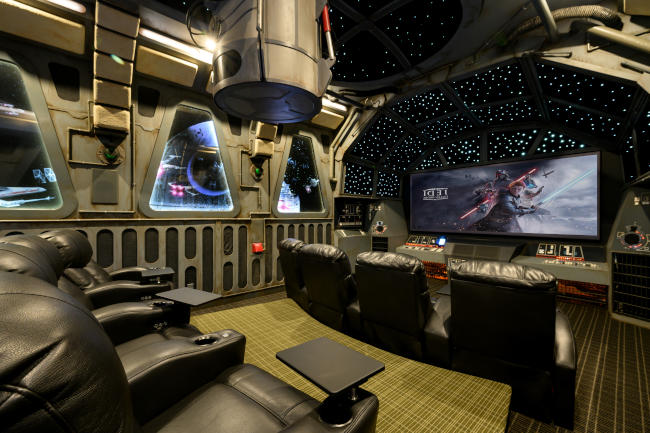 Alright. Here’s what you’ve been waiting for. Inside this Disney Golden Oak Star Wars House is a replica Millennium Falcon Movie Room.

Imagine streaming Obi-Wan Kenobi from the cockpit of the Millennium Falcon? Somebody pass the Galaxy’s Edge Outpost Mix because this home theater is THE perfect place to host a Star Wars movie marathon night. 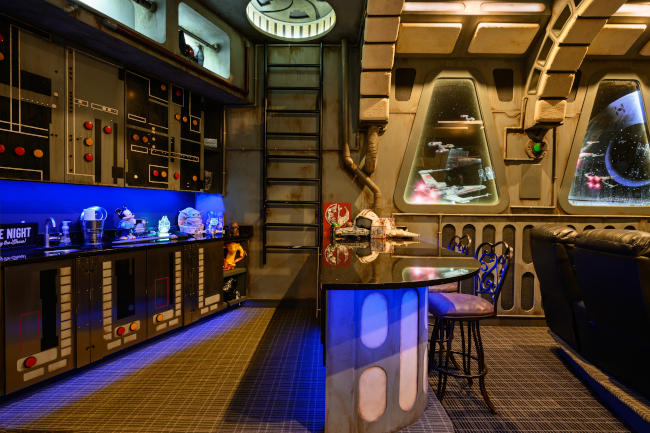 It’s a replica room worthy of the original ship which, as we all know, made the Kessel Run in less than twelve parsecs. Oh, and no need to smuggle in movie snacks here. Looks like there’s room for a pretty impressive snack bar in the back.

Do You Dream Of Living In A Real-life Disney House?

Kinda gives a whole new meaning to the term Mouse House, doesn’t it? This Disney Golden Oak Star Wars House is a dream come true. Anyone have a spare $15M lying around?

For a look inside Disney World’s immersive Star Wars hotel, get a digital subscription to WDW Magazine. You’ll get instant access to 100+ issues including this month’s Magic of Imagineering issue where we take you inside Galactic Starcruiser.