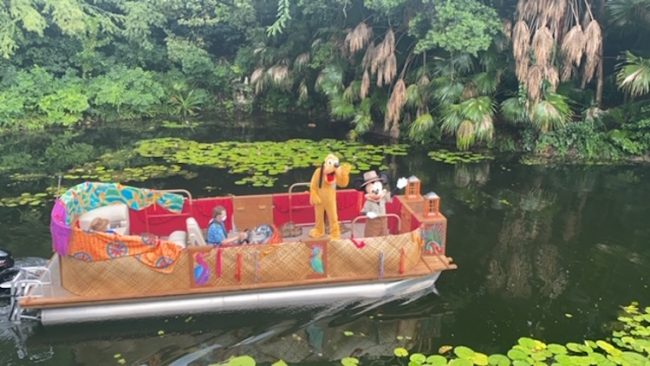 Since reopening their parks we knew Walt Disney World would need to have characters out and about but we didn’t know exactly how we’d greet characters at Disney during Covid-19.

A couple of weeks in, we’ve glimpsed what character interactions might look like for the near future.

While we cannot hug or high five the characters for now these new, creative interactions have been unexpected fun. If you’re in the parks and “just miss one,” hang on for about 10-15 minutes and there’s bound to be another one coming your way!

In any of the parks, if you hear random, cheery music there is bound to be a character cavalcade coming.

In the Magic Kingdom, these are essentially “mini parades.” We have seen one float from the “Celebration Parade” featuring Mickey and Minnie among others.

We love that they have also brought back the “Move it! Shake it!” music for the float featuring Goofy and part of the Caballeros team. Tinker Bell also floats by, sitting on top of a roving treasure chest to “Following the Leader.”

The float with all of the princess is a little girl’s dream come true… even led by Merida on her horse!

Gaston, with his narcissistic attitude, will also pass by on his horse from time to time followed by some of our favorites like Peter Pan, Mary Poppins, Aladdin, Tigger, Alice, and more. 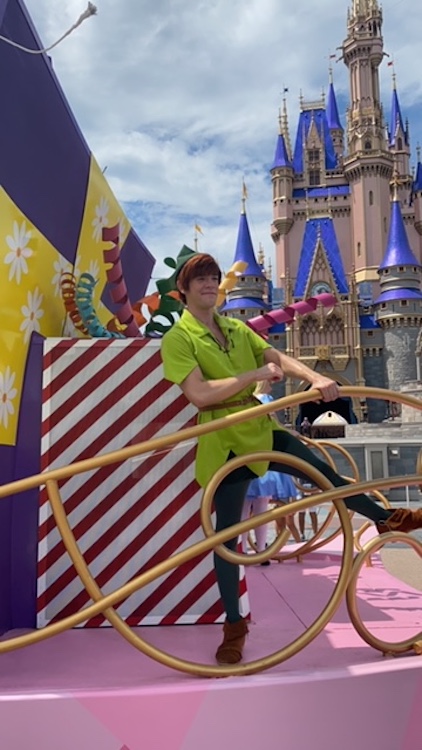 See Peter Pan and other Disney friends in a Character Cavalcade, the way to catch characters at Disney during Covid-19! Photo by Julie de la fe

One of the biggest and best surprises was finding the evil stepsisters on the back of Cinderella’s Castle throwing snarky comments to passing guests. They really are fun to watch and interact with.

How cute!! Chip and Dale can be found floating down the river on a raft in their best Americana Frontierland style.

And who wouldn’t love to see those Country Bears smiling down from their balcony?

Last but not least our space friends, Stitch and Buzz, have been spotted on the Tomorrowland Stage.

Great job at showing off our favorite friends at Magic Kingdom, Disney!

Characters Round the World Showcase at EPCOT

EPCOT has never had the character focus of Magic Kingdom so we are really enjoying the visibility of the characters in this park now.

In Future World East, we have spotted both Pooh and Joy on separate occasions. Pooh Bear sometimes appears with a butterfly net and can be found wandering chasing butterflies before coming closer to say hello.

Joy, on the other hand, seems to enjoy skipping and twirling in the open grass field. Her enthusiasm can be felt by all who come.

Back in the World Showcase are a series of cavalcades.

Again, whenever you hear themed, whimsical music there are probably characters approaching. One cavalcade features many of the princesses: Snow White, Belle, Aurora, and Jasmine.

Another features Elsa walking in front of a carriage carrying Queen Anna. And, of course, there’s bound to be one featuring the Fab Five: Mickey, Minnie, Donald, Goofy, and Pluto.

These cavalcades are short but the characters do seem to try to blow kisses or wave at each individual person. It is so sweet!

Finally, in one of my favorite new interactions, EPCOT now has Mary Poppins and Alice meeting alternatively in the UK band gazebo.

There are markers clearly defined for you to stand on and you can take a selfie or have a friend use your phone for some great pictures!

TIP: At this interaction, the two ladies can even hold a conversation with you. It was really special watching Alice talk to the children as they were playing in the maze of bushes surrounding the gazebo.

What a magical moment at Disney!

Characters take to the Water at Animal Kingdom

At Animal Kingdom, most of the characters are floating on rafts in the river that circles through the park.

There are many great bridges and spots to watch them, including the patio of Nomad Lounge.

Again they try to make every person feel special as they float by with music appropriate for their setting.

Ones that I have seen feature Safari Minnie and Mickey, Timon and Rafiki, Pocahontas and Meeko, Dino Chip and Dale with Goofy, and Donald and Daisy. 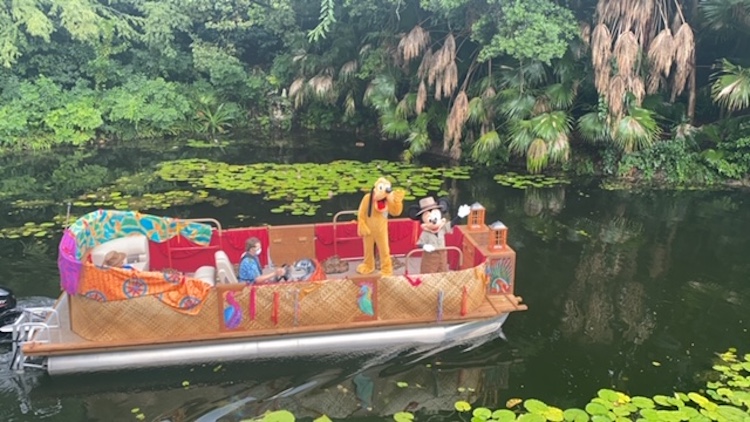 Mickey and Pluto take to the water in Animal Kingdom. Photo by Julie de la fe

I just love the safari outfits on Mickey and Minnie.

And, who can resist those two adorable chipmunks dressed up like happy dinosaurs?!

The presence of these characters at the Animal Kingdom feels very natural.

I hope that some of these ways to greet characters at Disney during Covid-19 stay long after regulations are scaled back.

In Hollywood Studios, some of the characters pass by in customized themed cars.

These were the shortest of the cavalcades therefore a little more difficult to catch especially if you are riding the major attractions.

TIP: The cavalcades enter near the entrance on Hollywood Boulevard then head straight toward the Chinese Theater where they turn left and exit by Star Tours.

There are three different cavalcades we’ve seen featured at Studios.

My favorite is the Pixar cavalcade featuring Edna Mode and Buzz Lightyear in their custom cars.

Mr. and Mrs. Incredible, the toy soldiers, and Woody can be found walking alongside their friends.

We have also seen Sulley, from Monsters Inc, included in this cavalcade.

The other two cavalcades feature some of the Fab Five and Disney Junior favorites.

Of course, Mickey and Minnie are present here too. Fancy Nancy, Doc McStuffins, and Vampirina round out the Disney Junior cast.

In Galaxy’s Edge, the same characters can be found but they are no longer out in the crowd. We’ve seen Rey and Chewbacca scouting out the town for trouble and stormtroopers making way for Kylo Ren’s appearance.

Sometimes they can also be found around the Millennium Falcon and the other ships near Star Wars: Rise of the Resistance.

Regardless, it is always surprising to see one of these characters pop up.

How we interact with characters at Disney during Covid-19 is different, but we’re loving how they are still present helping the magic stay alive for guests.

For even more Disney magic in your life, have our print magazine delivered to you monthly! Subscribe today! 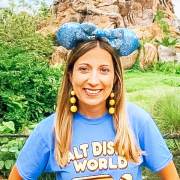