The Magnificent Imagineering of Fantasyland 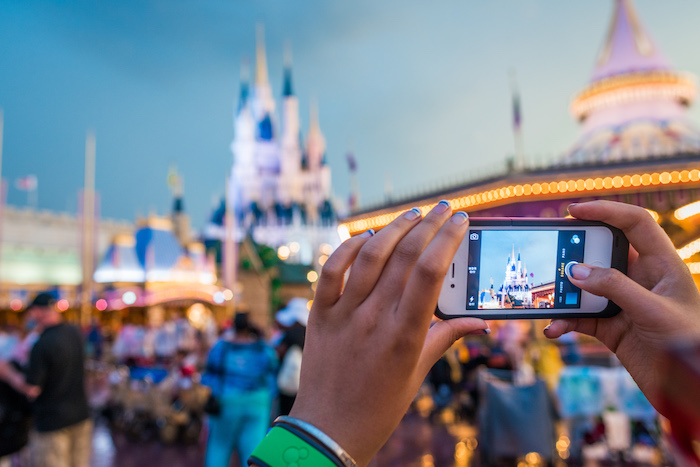 One of the most favored divisions in the Magic Kingdom, and perhaps all of Walt Disney World, Fantasyland is chock full of whimsical renaissance music, architecture, food and astounding Imagineering.

I for one think of this beloved land as synonymous with Disney in general.

Peter Pan’s Flight and it’s a small world may be king of the castle in this breathtaking village, but so much more is in the air, quite literally. From Mickey’s Philharmagic to those epic bathrooms, let’s go on an adventure to a land far far away…

Let’s go on a leisurely walk through Fantasyland in this 4k POV video tour, and then I’ll tell you facts all about my favorite spots.

1. Fantasyland Food > Any Other Food

Walt Disney World is snack and full-service meal heaven with a little something for any palate.

Fantasyland has virtually everything, from basic pizza, burgers, and dogs for kiddos, or fun twists on the same for those with more adventure in their diet. 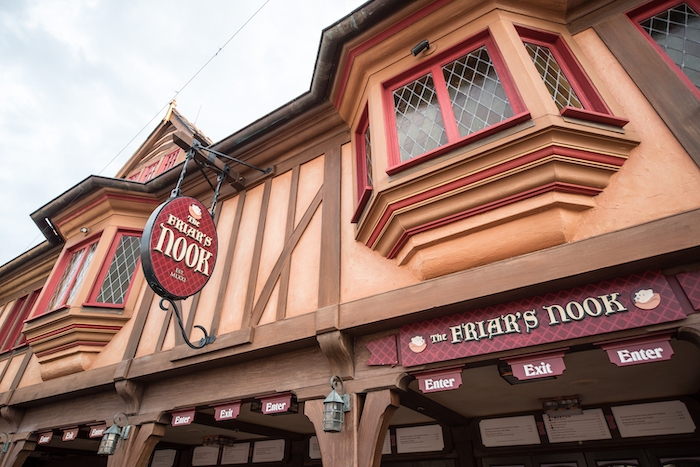 Friar’s Nook has some magical options! Photo by Laurie Sapp

My personal favorite for Quick-Service is the vegan brat and tots at The Friar’s Nook, but you can’t go wrong with a flatbread from Pinocchio’s Villagehaus just across the way!

If it’s a sweet snack you’re craving, be sure to hit up StoryBook Treats for a decadent Ice Cream Cookie sandwich, or one of their seasonal flavored Dole Whips! Even the Quick-Service spots are authentic to the Fairytale/Renaissance theme!

The Fairest in the Land

Nothing will make you feel more like royalty than Table-Service dining at Cinderella’s Royal Table and Be Our Guest.

For my 30th birthday, we were able to procure dining reservations in the castle with all the princesses, and special meet and greet with the queen bee herself, Cinderella. I don’t think I had ever felt so giddy, and the surprise appearances from fellow princesses as you dine is nothing short of magical.

Second only to Cindy’s pad in Fantasyland (in my opinion) is of course the Be Our Guest restaurant in Beast’s castle. 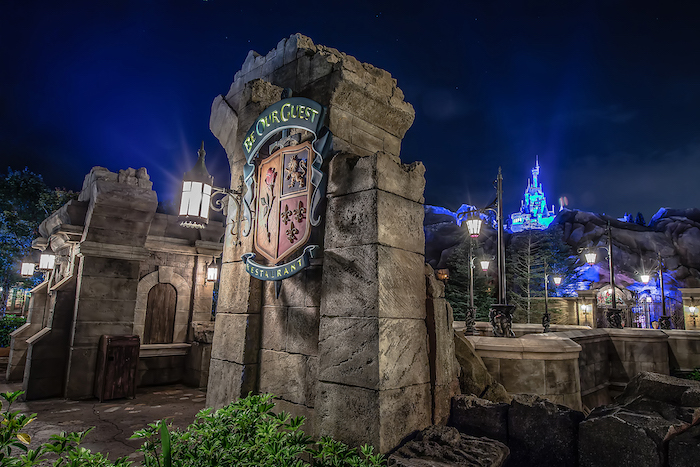 The view of Beast’s castle is really spectacular. Photo by Brett Svenson

Hidden away in between Enchanted Tales With Belle and Seven Dwarfs Mine train, the not so humble abode is just as magnificent and otherworldly as you might imagine.

With fine French fare for breakfast, lunch or dinner (if you’re lucky, you’ll catch Beast and Belle waltzing in the dining room for the latter) you’ll enjoy exquisite atmosphere weather in the Ballroom or the eerie West Wing.

Be sure to catch a glimpse of the castle on a foggy or rainy day in the Magic Kingdom for an especially sinister view! Fun fact: just like the rose helped the Beast find himself, the rose you get upon entering will help the staff find you!

It may be pretty obvious that the theme of Fantasyland has a renaissance feel to it. This may be why I spend the majority of my time here—I am period theme obsessed (my own wedding took place at Medieval Times Dinner and Tournament).

One of the most genius Imagineering developments of architecture in Fantasyland is a little something called forced perspective.

This is basically a trick of your eyes made possible by colors and textures of the buildings—in this case towers and castles—to cause them to appear larger than they actually are (this is also done intentionally to ensure that Disney doesn’t need to install blinking red lights for low flying aircraft, maintaining the illusion!). Whoa! 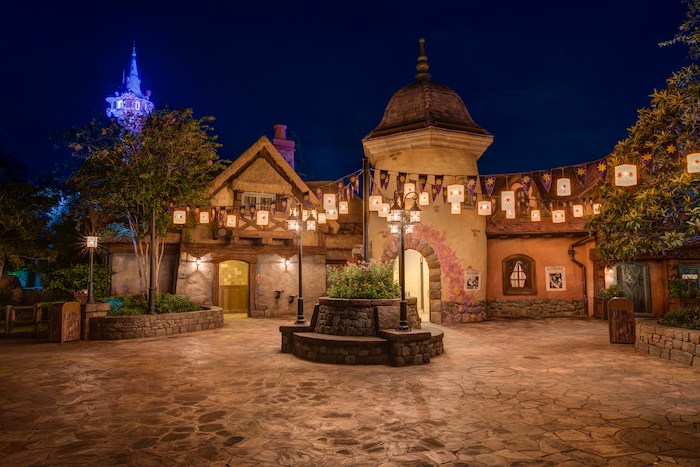 The most majestic bathrooms in existence. Photo by Cliff Wang

While Cinderella and Beast’s Castle are the obvious staples of this piece of fantasy-meets-history, the attention to detail of even the Tangled restrooms is mindblowing (we can all agree that those are the fairest bathrooms in all of the land, right?).

Not to mention the entire Rapunzel section complete with her adorable tower is quite possibly the most stunning view, as well as an incredibly relaxing place to kick your feet up and count hidden Pascals whilst you take in the beauty of Rapunzel’s childhood home.

Fantasyland can be overwhelming at times, being one of the most crowded lands in the most crowded park in Walt Disney World. But there are a couple of spots you can hunker down in, if you hit it at the right time, and even for the right price.

It’s no secret that Prince Charming’s Carrousel is a ten minute wait on a busy Magic Kingdom day. But did you know that the Cast Members, much like an empty People Mover, will continue to allow you to go round and round and round if there is little to no wait? 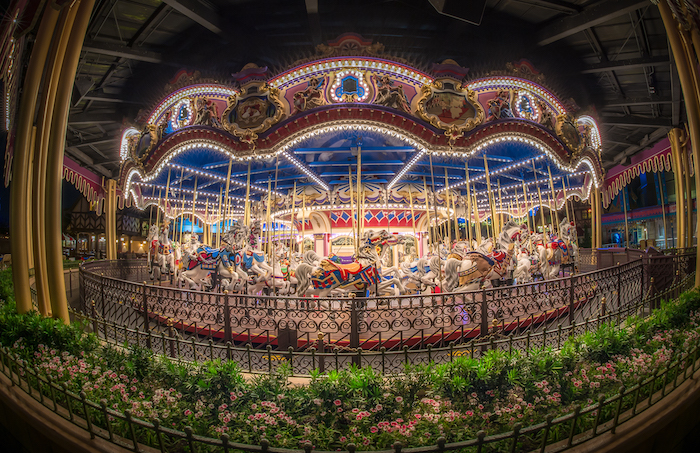 Ride Prince Charming’s Royal Carrousel round and round! Photo by Judd Helms

As long as it doesn’t interfere with the enjoyment of fellow guests, Cast Members are happy to humor you in enjoying your own little hideaway all with a stunning view of Cinderella Castle.

And speaking of Cinderella Castle…

If it’s the ultimate hideaway you’re looking for, look no further than the royal suite located inside of Cinderella Castle.

About ten years ago, Imagineers created the suite as a daily giveaway during the Year of a Million Dreams, and was then used as backstage storage space (quite the change!) and was also used as Disney World phone operators’ work space—talk about a corner office with a view!

While the suite itself is not technically vacant for rent in the general sense, often big sponsors, like ESPN this year for instance, are giving away a stay at the suite, including airfare, park hopper passes and select food and beverages in the parks for a very lucky family of four.

The best part? The proceeds fund cancer research across the country. Imagine being the family to win that ultimate vacation—nothing else would compare.

Nearly everything in Walt Disney World is pleasing to the nostrils, but some of the scents are specifically designed to press hard on the nostalgia button.

The scent of vanilla sugar cookies on Main Street, or fresh cooked waffle cones, is probably the most well known scent Disney uses to tie us to our childhood, but Fantasyland also has a similar sweet smell.

To me, it smells like vanilla (minus the sugar cookie aspect of Main Street) throughout the entire land, but that’s not the only aromatic pleasure you’ll experience here. 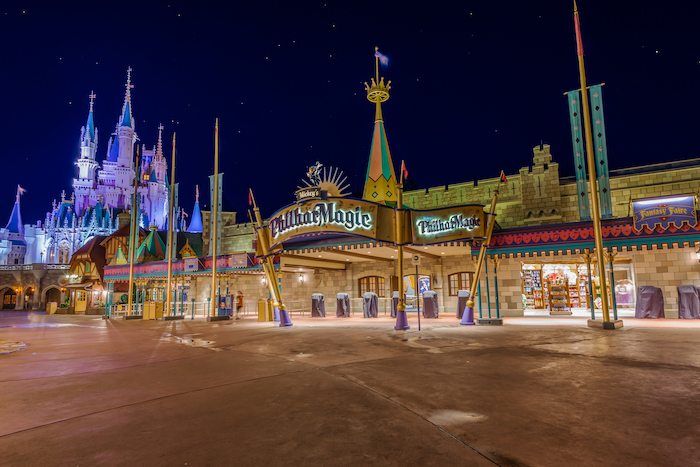 There are lots of sights and smells to experience in Fantasyland! Photo by Cliff Wang

The Be Our Guest Scene in Mickey’s Philharmagic gives you a nice whiff of what seems to be apple pie right as the baked good meets Donald’s face!

Not only will Donald remind you of the movies and cartoons you watched as a child, but you might also flashback to when Grandma’s apple pie was cooling on the windowsill!

Whether you are a thrill seeker, or are like me and are a member of team sensitive tummy, Fantasyland has an attraction for you!

While I’m not a huge coaster fan, I do love the theming (Snow White is my favorite princess!) and the short thrill that is Seven Dwarfs Mine Train. 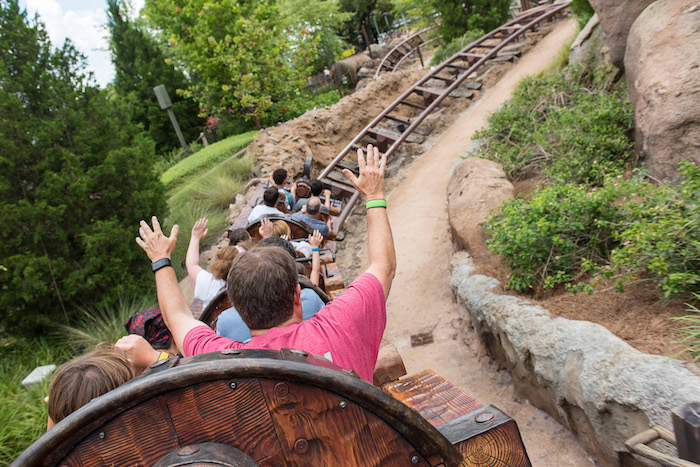 Fantasyland has everything from thrilling roller coasters to slow boat rides. Photo by Laurie Sapp

I stood at the fence for over a year of visiting the Magic Kingdom, watching as the mine carts would drop, guests would scream and I would promptly head to Under the Sea – Journey of the Little Mermaid (if you want an added twist, be sure to check out their queue, where you can find a tribute to the Nautilus from 20,000 Leagues Under the Sea).

One day I worked up the courage, got a FastPass+ and discovered the delight of Disney coasters. 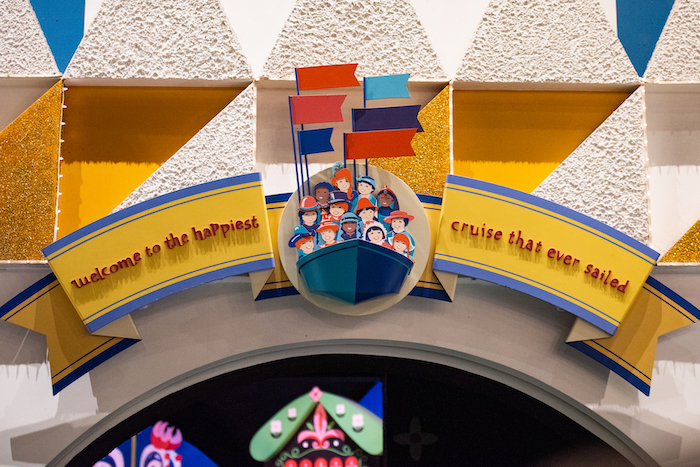 You can never go wrong with it’s a small world! Photo by Mike Billick

Having said that, the magic of Peter Pan’s Flight, Mickey’s Philharmagic, it’s a small world (my personal favorite) and even Prince Charming’s Carrousel are classic Disney in a way that doesn’t exhaust so many Gs and captures the magic of our childhood in a way only the Imagineering of Disney can.

Undergoing several changes, complete overhauls, and improving upon the magic year after year, Fantasyland builds on the dream that Walt Disney wanted to cultivate in our hearts.

It’s always changing, and always growing. A place so full of childlike wonder yet appeals to the child in us all can only be found in Walt Disney World and is completely encompassed by Fantasyland.

There’s always something new to see and to experience—which is how dreams should be!

Want to get even more Disney in your life and stay up to date with all things magical? Subscribe to our newsletter today!