This is the BEST Way to Get Around Walt Disney World 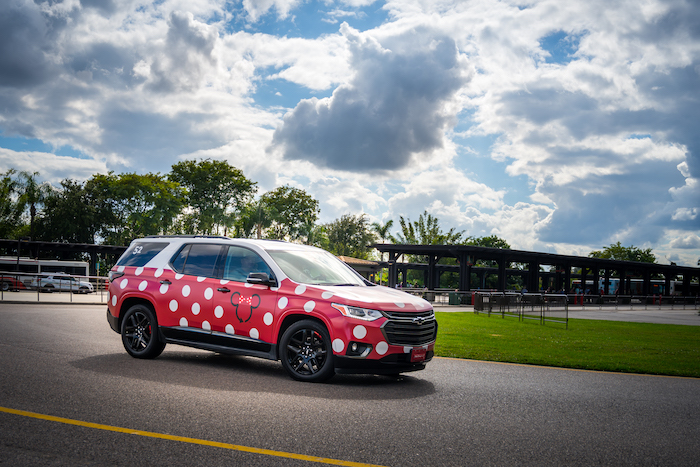 When you travel to Walt Disney World, there are so many things to decide and options to weigh. Sometimes, in the planning process, transportation is not a front-runner, but it’s still an important aspect of any Disney World trip. And with so many different ways to get around, we’re here to help you figure it out.

We’ll go through all the ways to get around WDW: buses, Monorail, Skyliner, boats, and Minnie Vans. Of course, we’ll even let you in on a little secret and tell you the very BEST way to get around Walt Disney World!

The Disney buses might be the most common way to get around on Disney property. They’re everywhere, and each resort has a bus stop with transportation to all four parks, water parks, and Disney Springs. 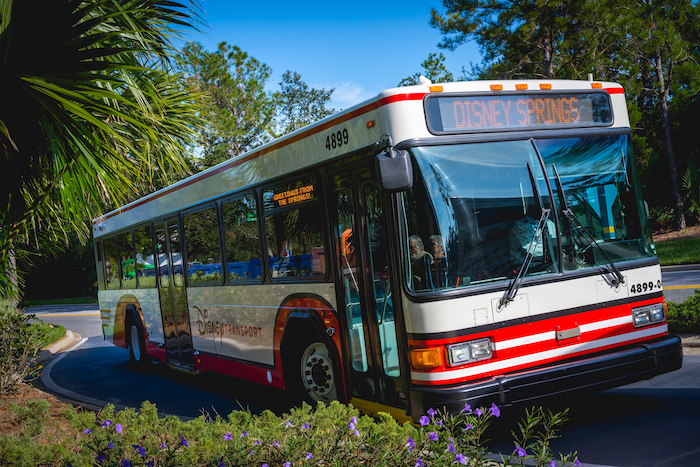 Take a bus, and you can get pretty much anywhere you want to go on property! Photo by Cliff Wang

Recently, Disney has been working on updating its buses. They’re all getting new wraps (like the Pluto one below), and are equipped with Wi-Fi and phone charging! The Wi-Fi will not only provide a great way to surf the internet while you’re riding, but it will also help provide guests with more accurate bus schedules in the My Disney Experience app. 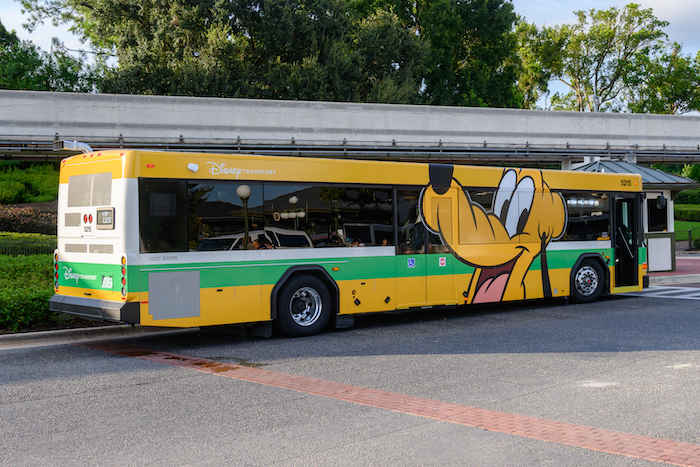 The Disney buses are getting cute new wraps! Photo by Mike Billick

There are a few downsides to bus transportation. If you’re wanting to get from one resort to another, you will often have to ride a bus from your resort to a park and then catch a bus to your final destination. The same is true for getting to places like ESPN Wide World of Sports—only a couple of the resorts have direct transportation there. You’re also stuck on the bus schedule, which is reliable, but sometimes a wait if you miss your bus or aren’t sure of the times. 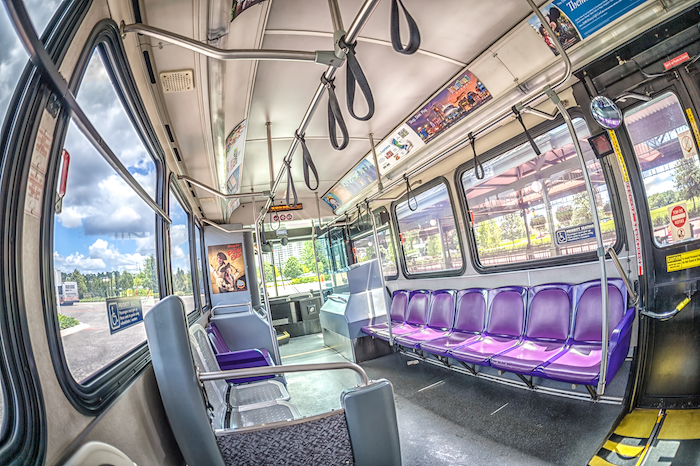 Check out a Disney bus on the inside. Photo by Judd Helms

Besides buses to and from parks and resorts, Disney offers Disney’s Magical Express. The Magical Express takes guests from the airport to your resort, and then back again when it’s time to leave. This makes it incredibly easy to get straight to the Disney magic and skip the traffic. It also provides phone charging, seat belts, on-board washrooms, personal air and light controls, videos to keep you entertained, and friendly drivers. 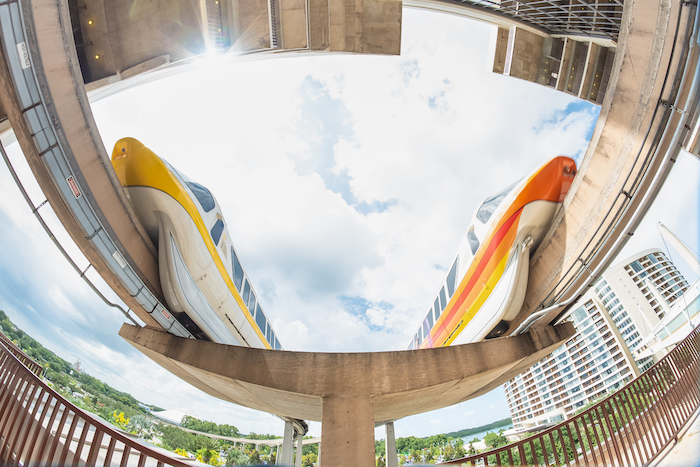 For the most iconic transportation, catch a ride on the Monorail! Photo by Laurie Sapp

Disney’s Monorail is probably the most iconic form of transportation. The Monorail was one of the opening-day attractions at Walt Disney World, and many avid Disney fans don’t just see it as a way to get around—it’s a ride, too!

Unlike the buses, you can’t just pick any resort and know you’ll be able to get around on the Monorail. It only runs between certain resorts and parks, so if you want to have the Monorail option at your resort, you’ll need to stay at one of Disney’s Magic Kingdom area resorts: Disney’s Polynesian Village Resort, Disney’s Contemporary Resort, or Disney’s Grand Floridian Resort & Spa.

Even if you’re not staying at one of the Monorail resorts, you should still take a ride on the Monorail. Photo by Cliff Wang

The Disney Skyliner is the newest way to get around at Walt Disney World. It’s a gondola system that travels along cables, similar to a ski lift, but with more capacity, and enclosed. It never stops, but at stations, the gondola slows down to a speed where riders can easily walk on and off. 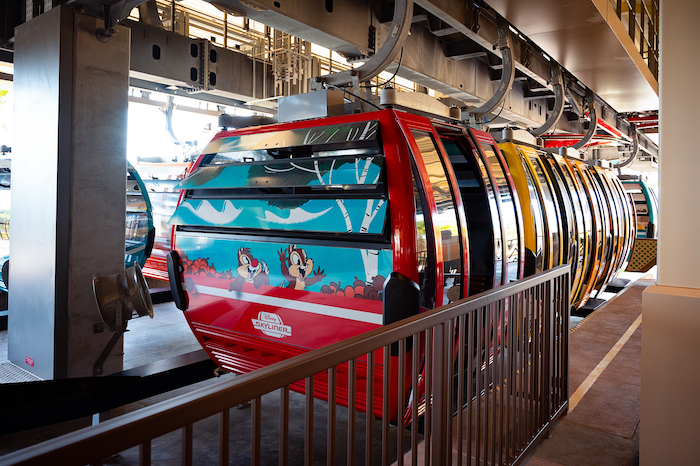 Check out Disney’s newest way to get around: The Skyliner! Photo by Courtney Reynolds

The gondolas on the Disney Skyliner are brightly colored and fun, and most of them are wrapped in cute character designs (like the Chip and Dale one above). You might not get to pick your character, but it can be fun to see what you’ll get every time you ride! 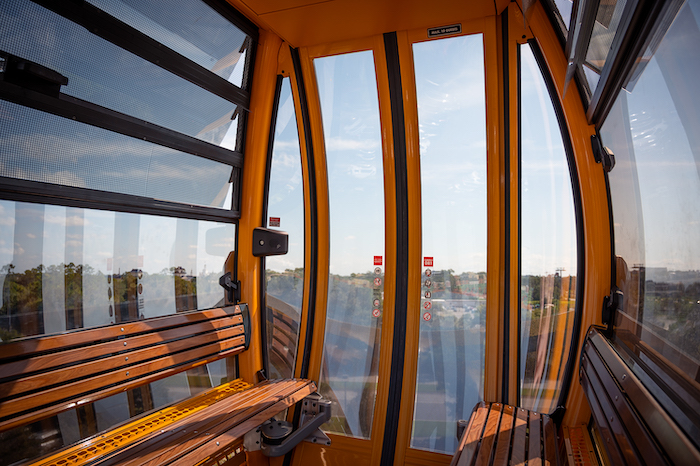 Inside, you get a beautiful bird’s eye view of WDW, while gently swaying with a cool breeze. Photo by Courtney Reynolds

Like the Monorail, the Skyliner doesn’t go to every resort and every park. There are four Skyliner resorts: Disney’s Art of Animation Resort, Disney’s Pop Century Resort, Disney’s Caribbean Beach Resort, and Disney’s Riviera Resort. The Riviera is also the newest resort at Disney World!

From those resorts, you can go to any of the other Skyliner resorts, or to Disney’s Hollywood Studios and to the World Showcase entrance at EPCOT. Likewise, you can go to and from Hollywood Studios and EPCOT. Because the Skyliner station is near the World Showcase entrance, you could easily walk to the station from any of the Boardwalk area resorts.

Guests in need of assistance boarding, because of a wheelchair of ESV can use the stationary boarding area. Here, the gondola comes to a complete stop to allow extra boarding time. Want to experience the Skyliner from home? We took our readers for a Skyliner ride in our April issue of WDW Magazine.

If you’re looking for a scenic, relaxing way to get around at Walt Disney World, many resorts and parks offer boat transportation! 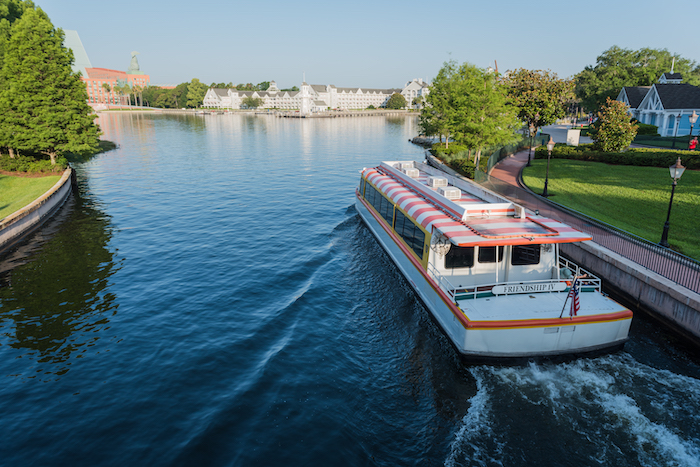 Water transportation is a relaxing, fun way to get around Walt Disney World. Photo by Laurie Sapp 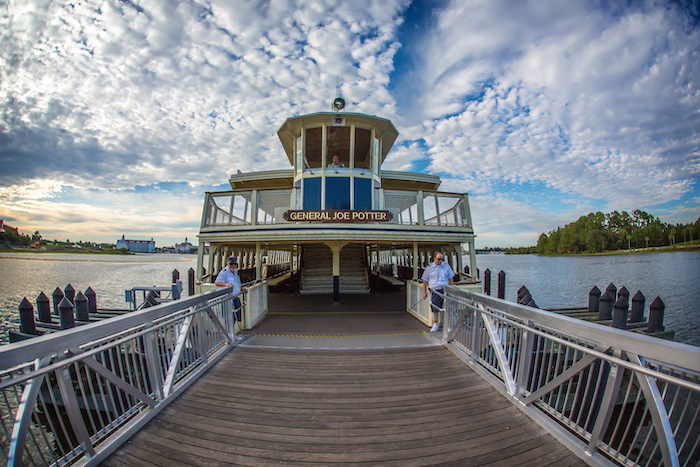 Take a ferry over to the Magic Kingdom in the morning and feel like you’re being transported to a whole new world! Photo by Brett Svenson

Many of the resorts have boat transportation to Magic Kingdom, EPCOT, or Disney’s Hollywood Studios.

You can also travel between EPCOT, Hollywood Studios, the Boardwalk, Yacht Club, or Swan and Dolphin Hotel on one of the mid-size Friendship boats across Crescent Lake.

Disney Springs also has some boat transport. From there, you can travel across Sassagoula River or Lake Buena Vista and get to Old Key West, Saratoga Springs, and Port Orleans Riverside and French Quarter.

This is the creme de la creme of Disney’s transportation fleet.  If you’re looking to get somewhere quickly and easily, have truly personalized service, and look great doing it—Minnie Vans are the way to go!  Unlike the other complimentary transportation options, taking a Minnie Van is an added fee, but it’s a worthwhile splurge. 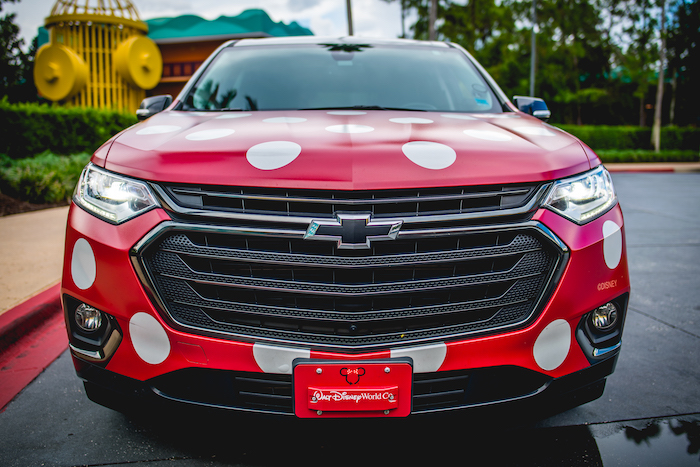 Take a Minnie Van for the fastest, most stylish way around WDW. Photo by Cliff Wang

If you’re familiar with ride sharing services like Lyft or Uber, you’ll feel right at home booking a Minnie Van. In fact, the service is powered by the Lyft app, when you want to call one you just fire up your phone and summon the next available vehicle.  The name is a little deceiving as they aren’t actual vans, but luxury SUVs, painted with Minnie Mouse’s signature red color and white polka dots. 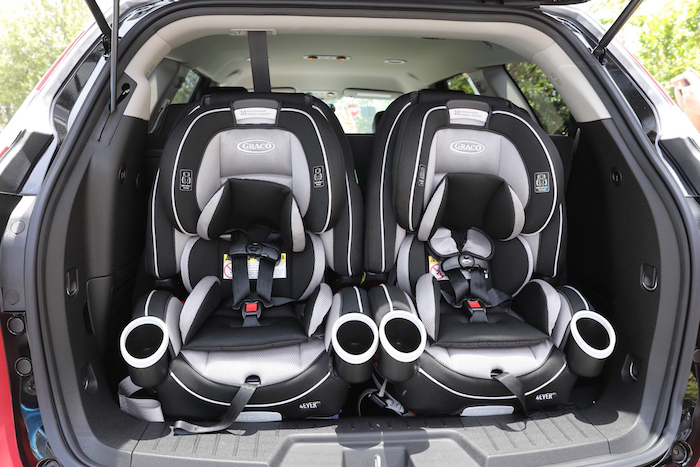 Minnie Vans come equipped with not one, but two car seats! Photo by Brett Svenson

Riding around in a Minnie Van is so comfy it will spoil you for the other resort transportation options.  There’s climate control, space for up to 6 people (including 2 car seats!), cables to charge your devices, and friendly, knowledgeable drivers who are Disney Cast Members.  They’ll give you tips and recommendations for your trip, and best of all—they’ll get you as close to your destination as possible.

Where other ride sharing services (and Disney transportation options) have designated drop-off zones further from park entrances or at the resort main lobby, a Minnie Van will drop you practically at the security checkpoint of a park, and as close to your room in a specific resort building as possible (my aching feet were SUPER thankful for this last summer when I was in the 80’s building at Disney’s Pop Century Resort and couldn’t fathom walking another 10 mins to my room).

If someone in your party needs a scooter/wheelchair accessible Minnie Van, you can pre-arrange this about an hour in advance.  And now you can call (407) 828-3500 in advance to schedule a pickup or drop-off from Orlando International Airport or Port Canaveral (start that Disney Cruise in style!).

There are so many different ways to get around Walt Disney World, and you can’t really go wrong with any choice (you’re at Disney)! But the most convenient, easiest, and most personalized option is to take a Minnie Van—and that’s why we think it’s the best!

Thanks to Disney for hosting us on a 3-night Resort Showcase where we got to tour and experience many of Walt Disney World’s resorts and restaurants and used resort transportation including busses, Disney Skyliner, resort launches, and Minnie Vans. #wdwresorts #deliciousdisney

Leah Sikes is a graphic designer and contributing writer for WDW Magazine and Dad’s Guide to WDW. When she’s lucky enough to visit the Happiest Place on Earth, you catch her hanging out with the 999 Happy Haunts. She also loves running in the parks (when it’s allowed at the marathons).