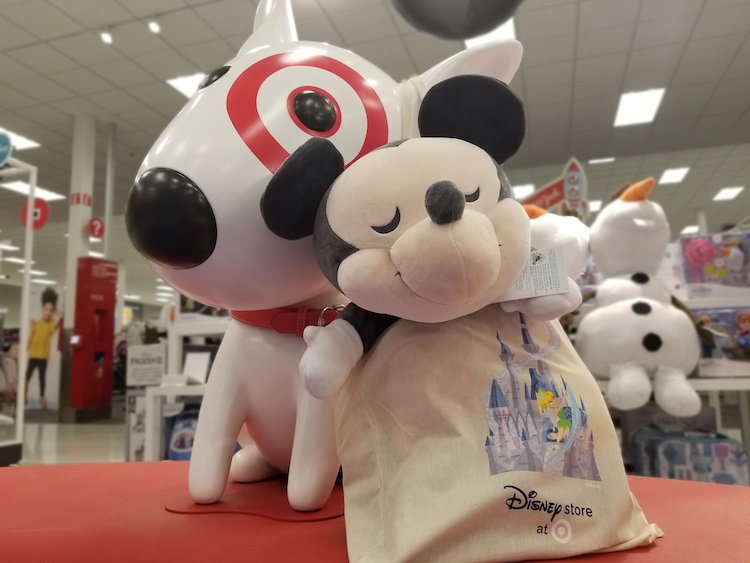 This weekend, Disney sprinkled a little pixie dust into select Target Stores across the United States and opened 25 brand-new shop-in-shop Disney Store locations, and I got one in my hometown! 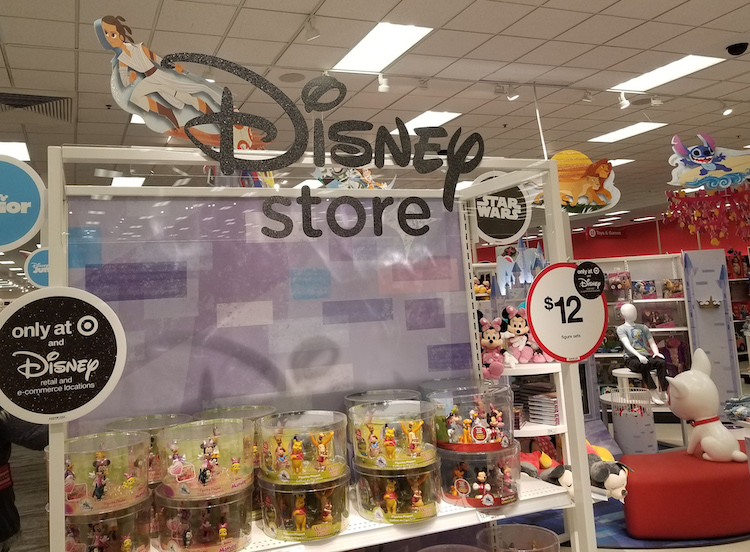 The Disney mini-stores are 750 square feet of pure magic. Photo by Leah Sikes

The shop-in-shop concept is just what the name implies: a particular brand or store creates a space inside a different store dedicated to selling their products. It is typically themed separately from the rest of the space and creates a unique shopping environment. Many Target stores already use this concept with Starbucks, placing miniature Starbucks locations inside Target stores so shoppers can get their coffee fix while shopping. 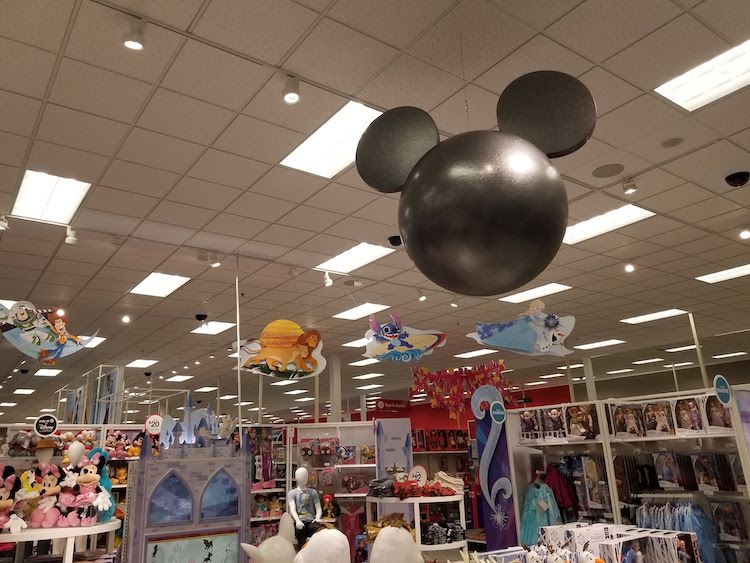 Disney announced this new partnership with Target in August at the annual D23 Expo. Shortly after, they named the 25 locations that would be receiving the first mini Disney Stores. The stores, according to Target’s website, were selected based on demographics and interest in Disney products already in Target stores.

My hometown, Edmond, Oklahoma (which also happens to be home-base for WDW Magazine), was one of these lucky locations. Our Target has also undergone the remodel the corporation rolled out in 2017, which I believe is likely another reason our store was chosen.

The store opened just a few days ago on Friday, October 4th, 2019 — and you’d better believe I was there for opening day. I didn’t exactly rope-drop the store (I am not a morning person), but I dropped by before lunch to check it out, and I was not disappointed. 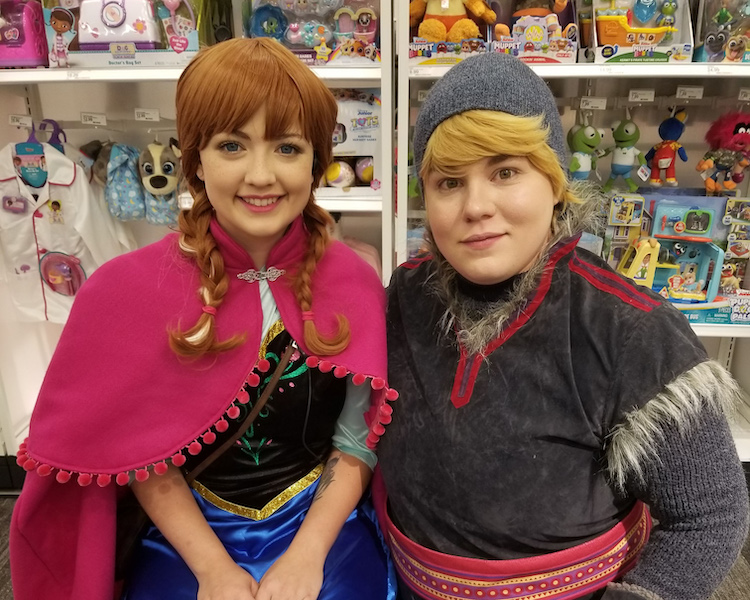 Anna and Kristoff came to visit for the grand opening! Photo by Leah Sikes

Disney and Target went all-out for opening day. Target Cast Members were in costume, there were Mickey-themed snacks out for guests, and the Disney music filled the space in and around the store. Visitors to the shop on opening day also received a special canvas tote bag (pictured previously, featuring Mickey Mouse and Bullseye). Moana, Jasmine, Anna, and Kristoff were in attendance and the princesses even read to some of the children who came to shop! 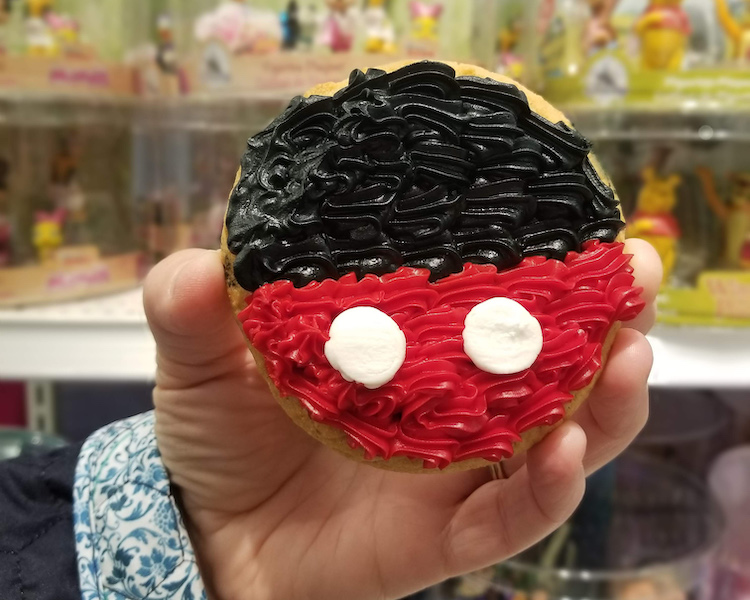 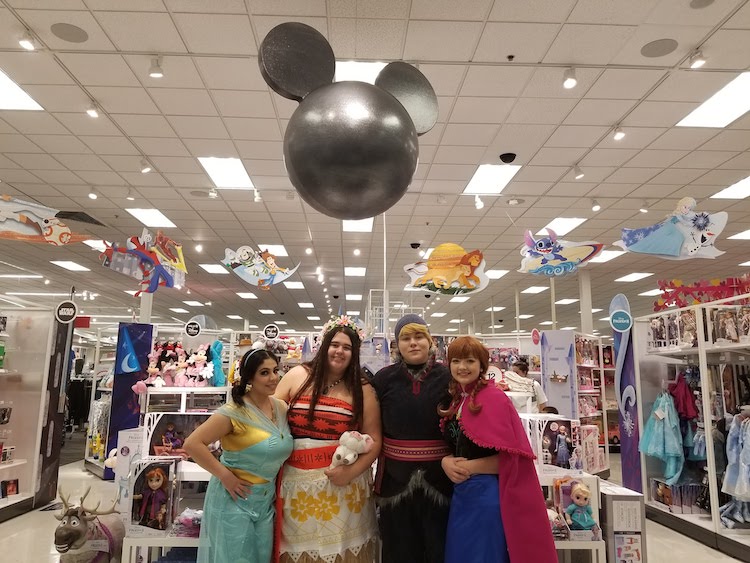 Some Disney friends dropped by to get in on the fun. Photo by Leah Sikes 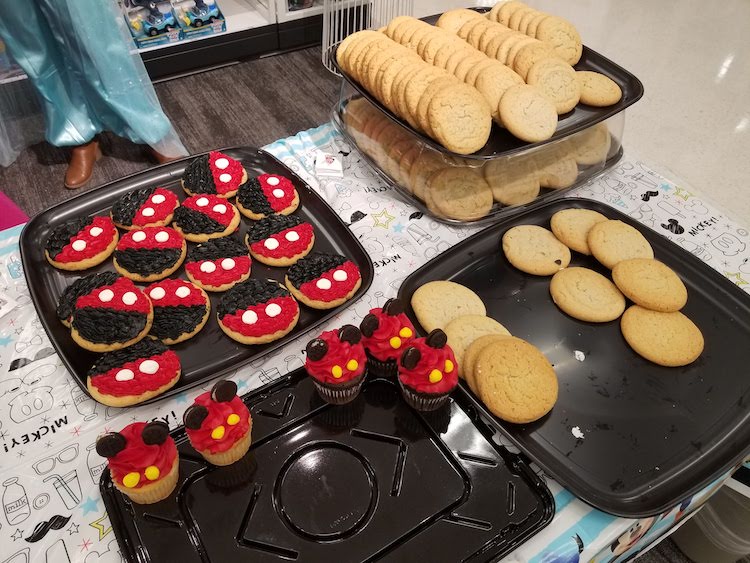 Starbucks (the shop-in-shop) even had a special drink just to celebrate the new Disney Store! It was called the Princess Frappuccino. Unfortunately, I didn’t get to taste this because they ran out, but it looked fun and delicious. 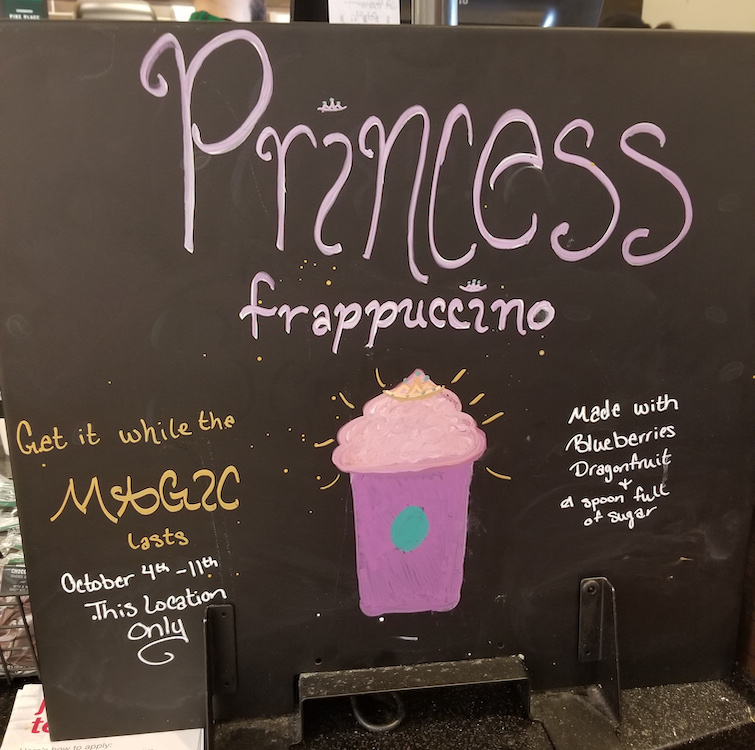 The Princess Frappuccino at Starbucks was blueberries, dragonfruit, and a spoonful of sugar! Photo by Leah Sikes

In most Targets, the Disney mini-store is located within the children’s section, around children’s clothes and toys. So, as you can imagine, a lot of the store is geared toward children. You’ll find toys, costumes, and clothes for Disney loving kids, but not a lot for the kids-at-heart. This is a little sad for me, as I don’t have any children around me, so there wasn’t much for me to get at the store. 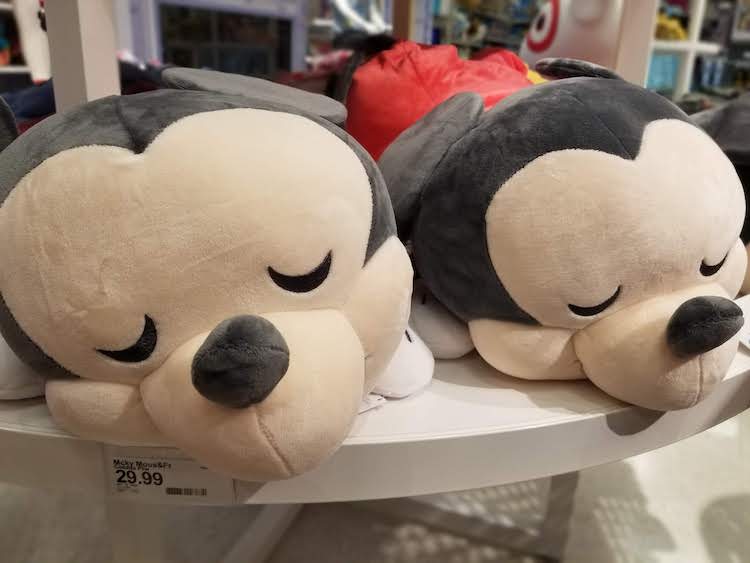 A super-soft and squishy Mickey catches some Z’s at Target. Photo by Leah Sikes

However, I still loved many of the items. The Mickey Mouse (pictured above) is the absolute softest plush toy I have ever encountered. He is fairly large, and costs $29.99. During opening day, there were several of them available, and when I came back the next day, not one sleeping Mickey could be found.

Some other items I loved (but didn’t purchase) included: 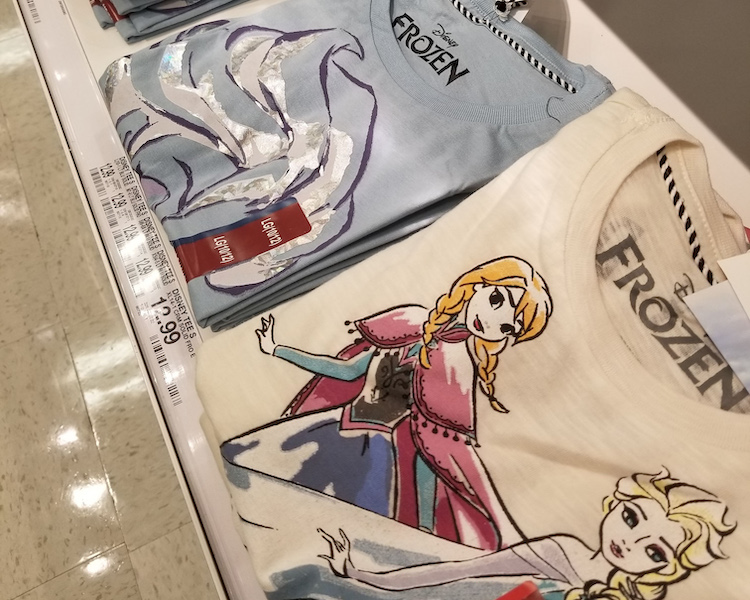 The sketch-y art style is all over the shirts here! Photo by Leah Sikes 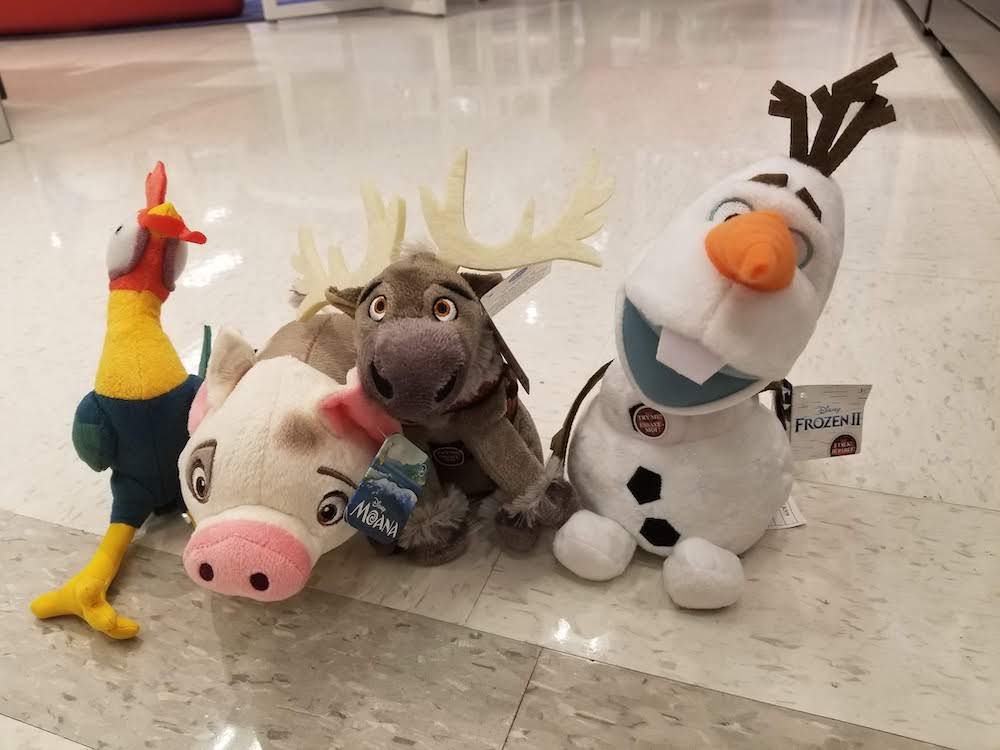 Get your own Disney sidekick! Photo by Leah Sikes 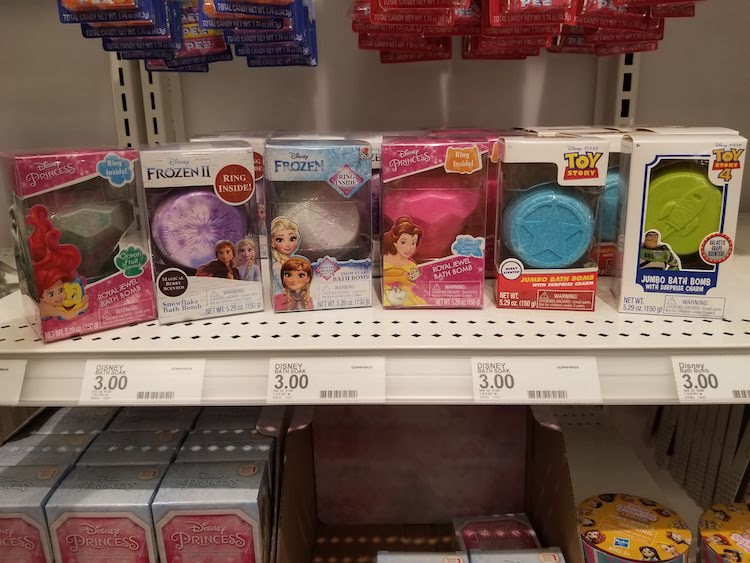 The bath bombs are themed to many Disney favorites. Photo by Leah Sikes 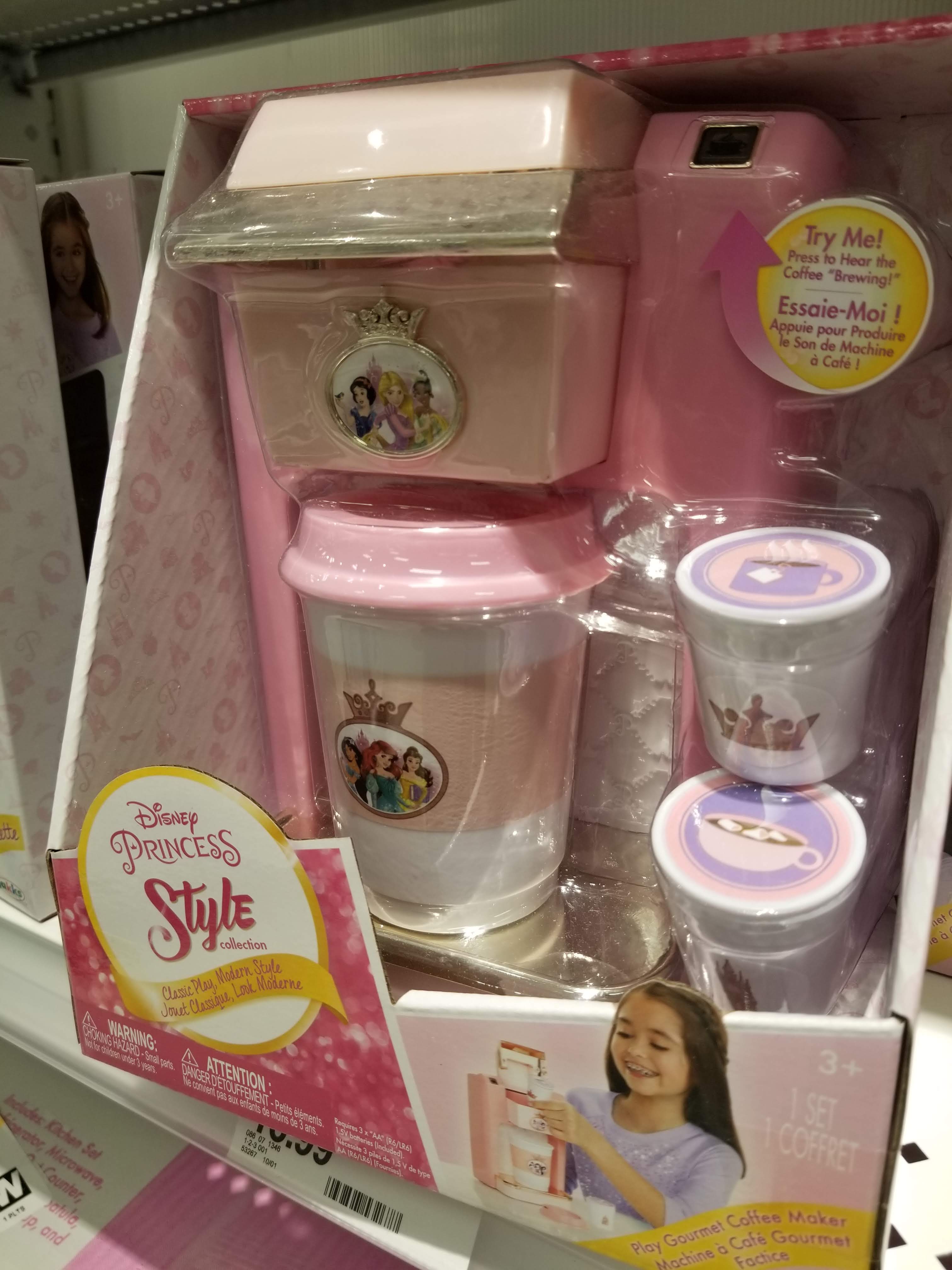 Where was this when I was a kid?! Photo by Leah Sikes

Some of the fare for adults included notebooks, a few Christmas sweaters, mugs, and Christmas ornaments. I loved the notebooks and took a Mickey Mouse one home with me! 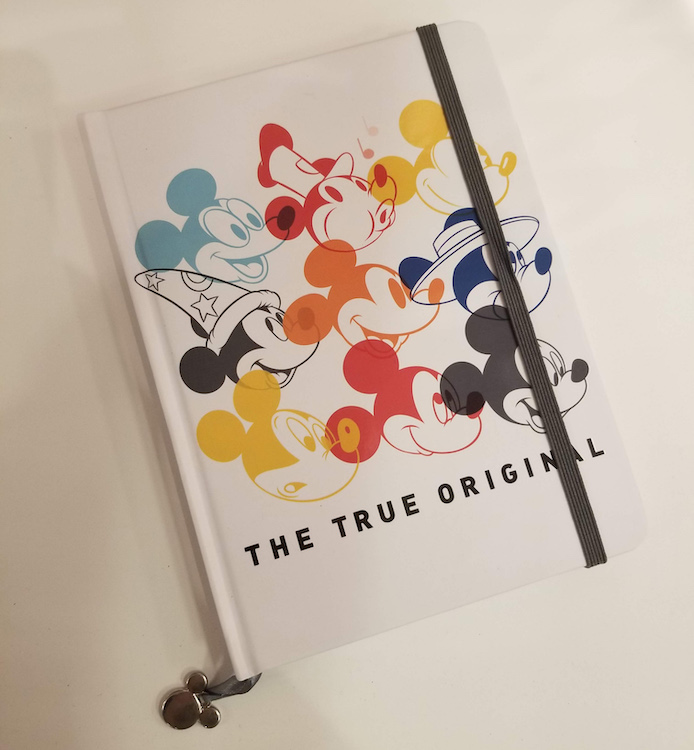 My souvenir from the Target Disney store! Photo by Leah Sikes

How They “Plussed” It

While you’re inside the store, it really feels like a small slice of magic – it’s easy to forget you’re in a Target! They pipe in Disney music so you can shop while listening to the best tunes. Once you walk away from the store, the music goes right back to your typical Target sounds. 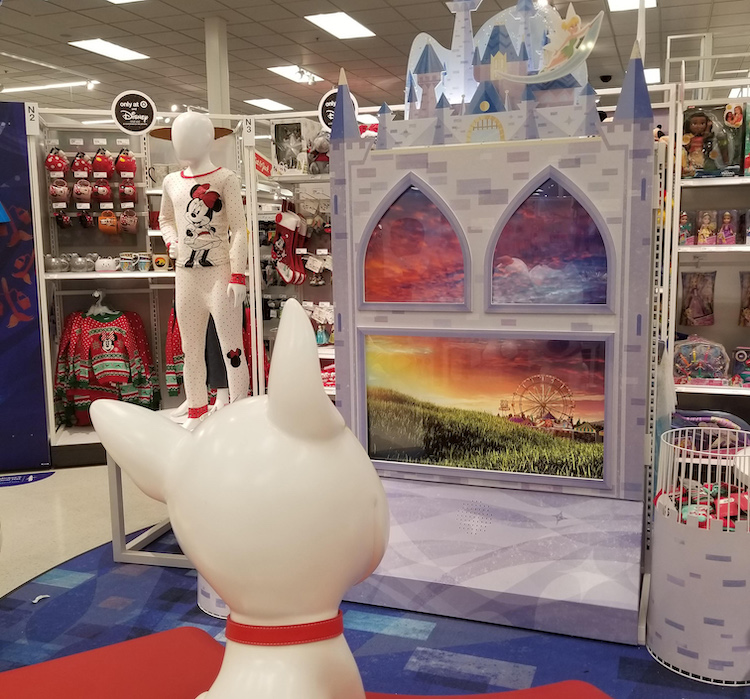 For the kiddos, the store includes a small sitting area with a screen (embedded into a castle cut-out) that plays clips from movies, trailers, and small games. 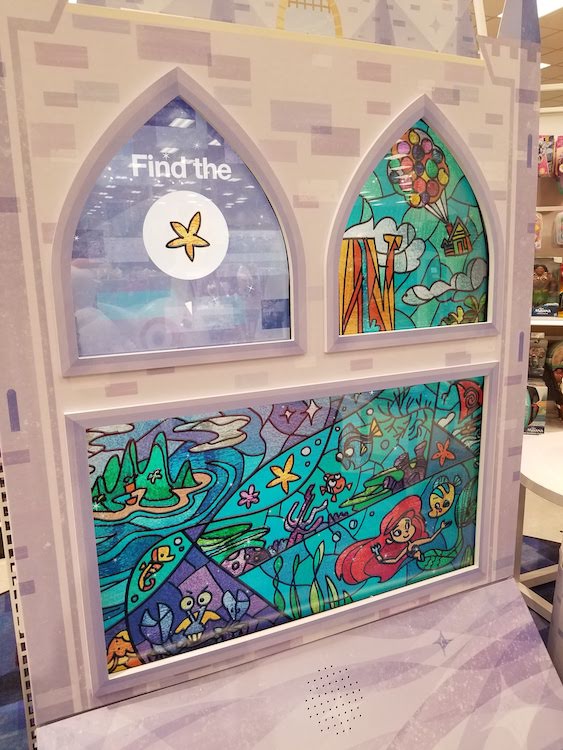 A small search and find game plays on the screen, accompanied by Little Mermaid music. Photo by Leah Sikes

Despite not having much for adults, the Disney Store at Target is a success in my book. It is incredibly cute, immersive, and so fun. I have hopes for more adult-size clothing, but Target still carries many Disney goods other places around the store. This store is perfect in my eyes, as I don’t have a Disney Retail store near me — the closest is an outlet store over 30 minutes away.

Disney has plans to roll out another 40 shop-in-shop Disney Stores in Targets in the United States by October 2020. So if you don’t have one near you, there’s still hope for next year! In the meantime, you can shop Target + Disney online!