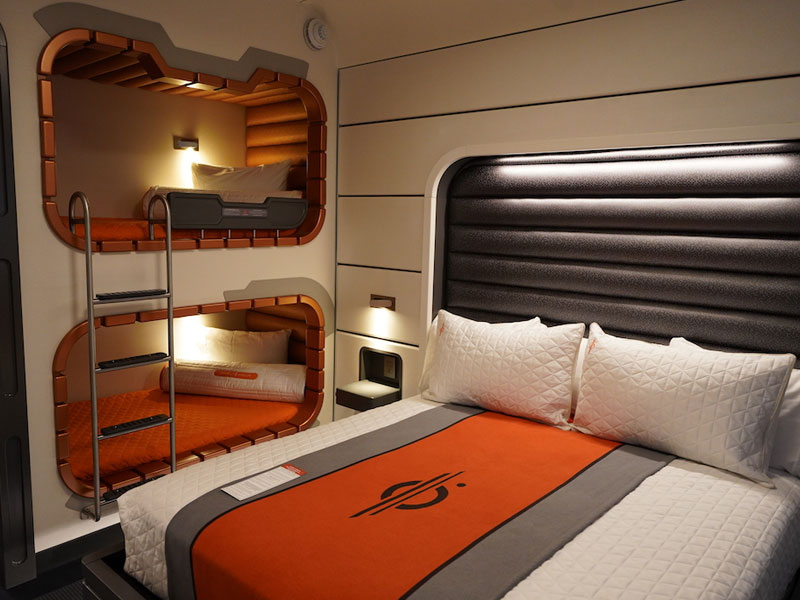 We snapped some exclusive Star Wars hotel room photos aboard Galactic Starcruiser during a recent media event so you can plot your flight.

We were invited to preview Star Wars: Galactic Starcruiser last week, and among lightsaber battles and unearthly foods, we were most excited to see the new staterooms onboard. What kind of room would space travelers be resting their weary heads? Here is our special preview:

There are three types of rooms—or cabins (like on a ship, get it?)—aboard Galactic Starcruiser. These types include the Standard Cabin, One-Bedroom Galaxy Class Suite, and Grand Captain Suite.

During our preview aboard the new Star Wars hotel, we got to explore a Standard Cabin. After crawling all over the interior and jumping on all the beds, Creative Director, Danny Shuster, was able to bring back some valuable intel for the Resistance … or at least for you to plan your next trip!

Notice anything familiar about the colors represented in the Starcruiser cabins?

That’s because the motif was pulled from none-other than your friendly neighborhood BB-8. This roly-poly member of the Resistance adds the perfect measure of happiness and retro-chic. We love the style of the queen bed featured in each Standard Cabin. 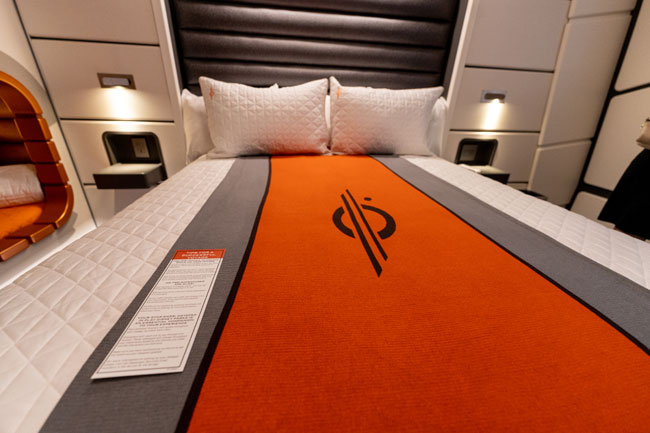 Remind you of a certain droid? Photo by Danny Shuster

On the in-room control panel, guests can interact with D3-O9, the ship’s Logistics Droid. This character is new, created just for Disney’s new Star Wars hotel.

From Disney, “Commissioned centuries ago by Chandrila Star Line’s founder, D3 has seen the ship’s history – and the entire galaxy – evolve, and she’s not shy about sharing her knowledge and opinions with passengers.”

Sounds like she can be a real help in unfamiliar territory! This control panel also features temperature controls and an in-room phone. 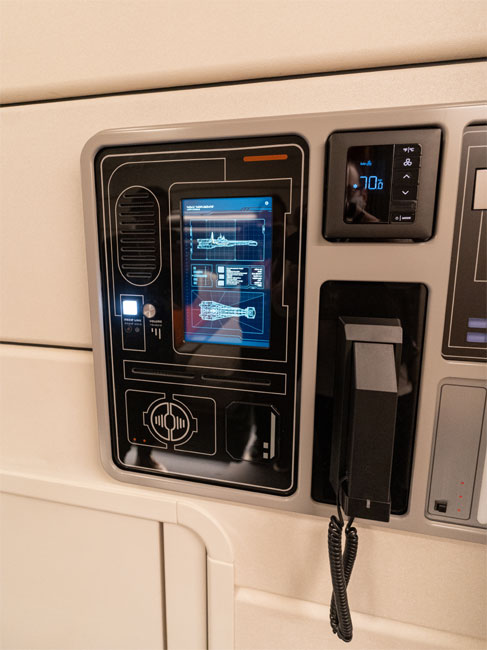 The control panel features a phone and in-room display. Photo by Danny Shuster 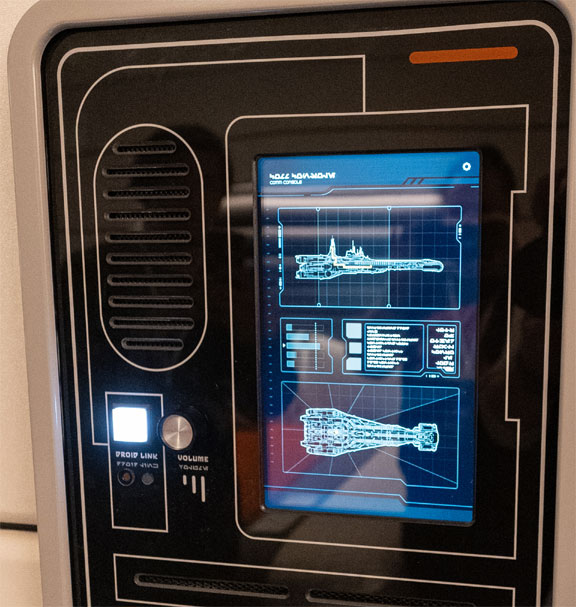 A closer view of the Halcyon on the in-room display. Photo by Danny Shuster 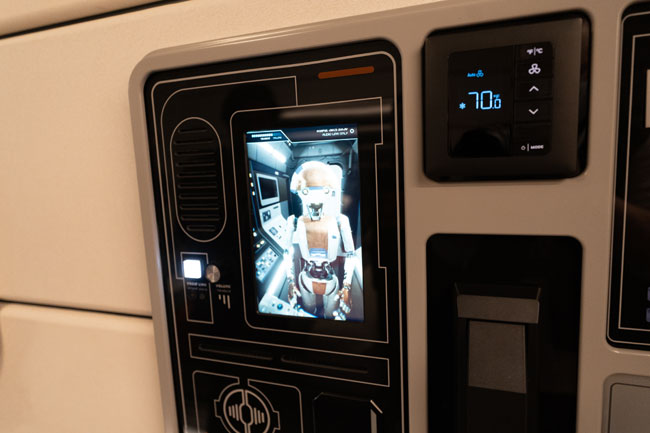 Need a bit of assistance? Photo by Danny Shuster

While aboard Galactic Starcruiser, you’ll hear these beds referred to as “berths,” just like on a seafaring ship on Earth. 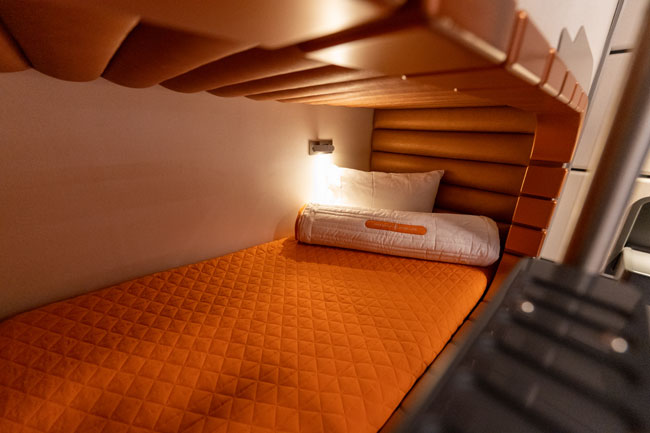 Inside one of the bunks. Photo by Danny Shuster

Each berth is large enough to sleep 1 adult each. 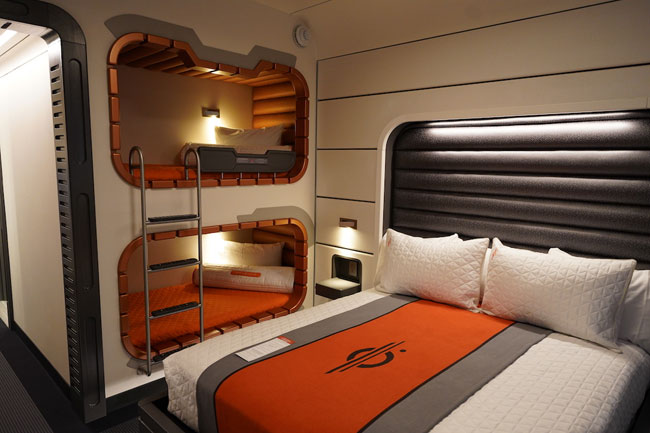 Inside a Galactic Starcruiser room. Photo by Danny Shuster

The bunks are situated right next to the queen bed and follow the same BB-8 motif. 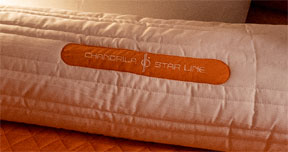 Since this is in the Star Wars universe, you won’t see Star Wars actually mentioned anywhere. You’re blissfully unaware of those earth films (even Phantom Menace), as you’re living the fantasy aboard the Halcyon! Therefore, the pillows read Chandrila Star Line, producer of the Halcyon. 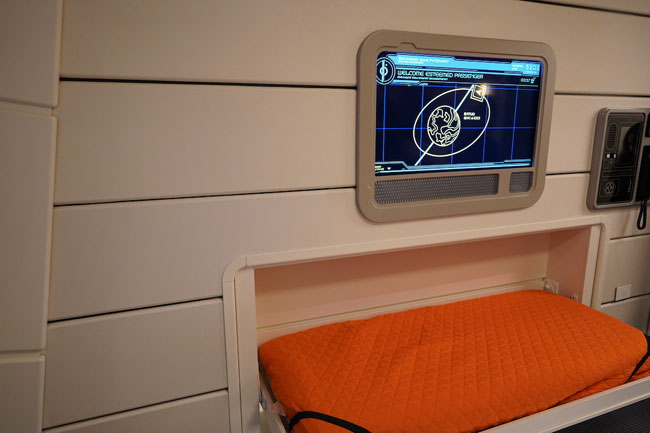 A peek out the “window” of a Starcruiser cabin. Photo by Danny Shuster

This trundle bed folds down to add yet another option for sleeping quarters. This is also sized to sleep one adult.

Storage Space in a Starcruiser Room 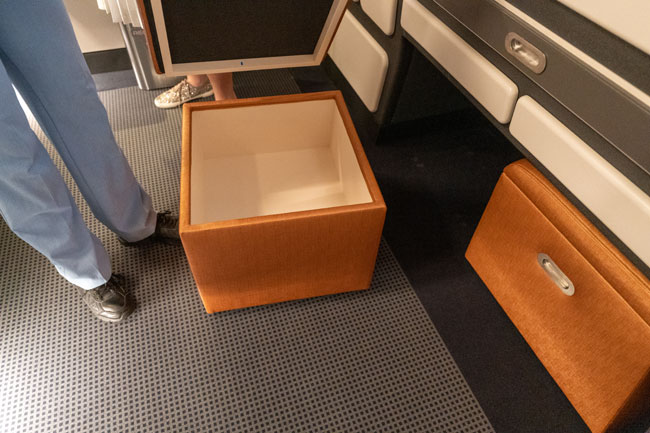 Storage cubes in a Starcruiser room. Photo by Danny Shuster

Cubes are so hot right now. These guys do double duty as stools and storage space.

Charging stations for your Datapad. Photo by Danny Shuster

These lil’ tables are at each side of the queen bed. Remote and Datapad charging ports … what more do you need? 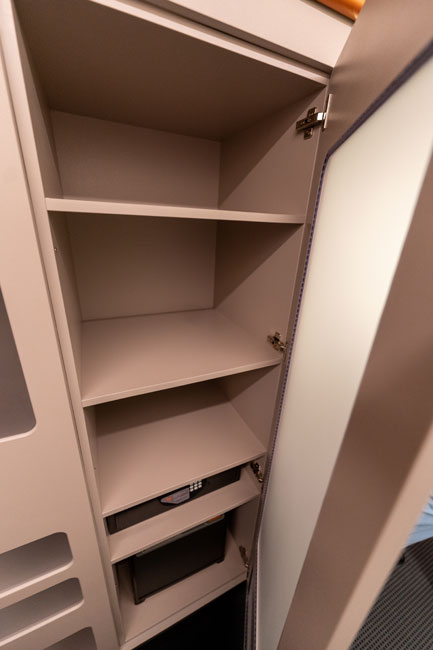 Closet space for those costumes. Photo by Danny Shuster

Each guest is required to be dressed in Star Wars-appropriate garb, so of course, lots of closet space is needed! 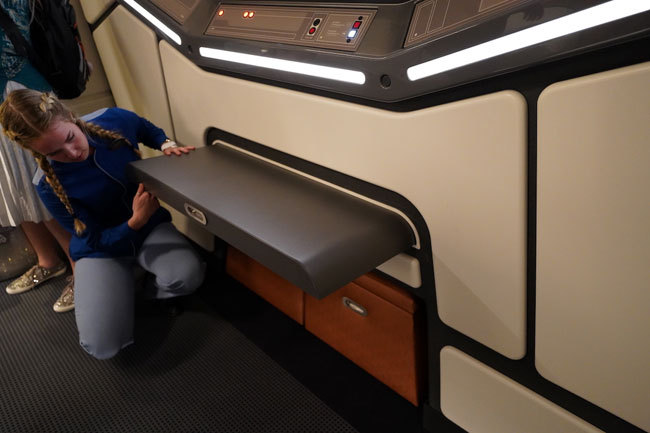 Surprise, it’s a desk! in the cabin. Photo by Danny Shuster

The bathrooms in the Starcruiser Standard Cabin remind us a lot of Disney Cruise Line stateroom bathrooms. This is a ship after all… 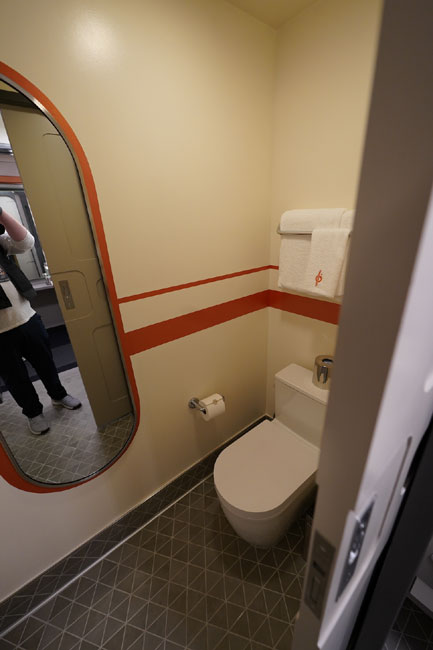 The bathroom inside a Galactic Starcruiser cabin. Photo by Danny Shuster 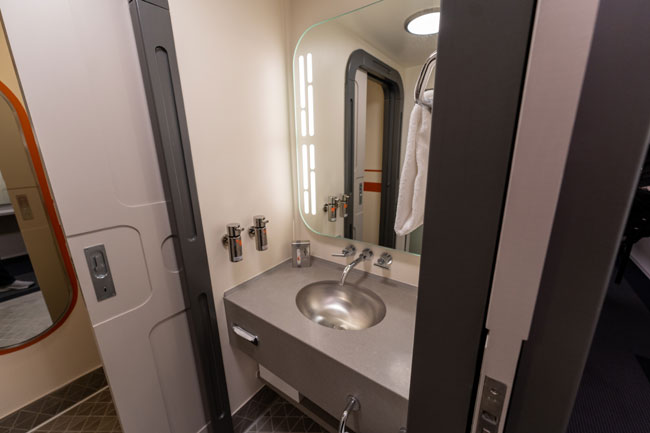 This very much reminds us of a cruise ship bathroom. Photo by Danny Shuster 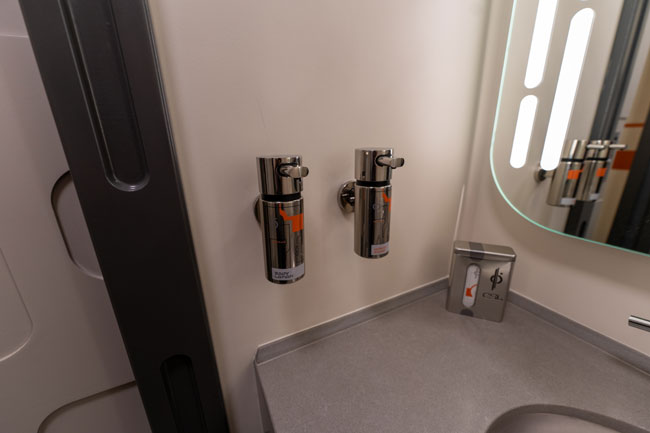 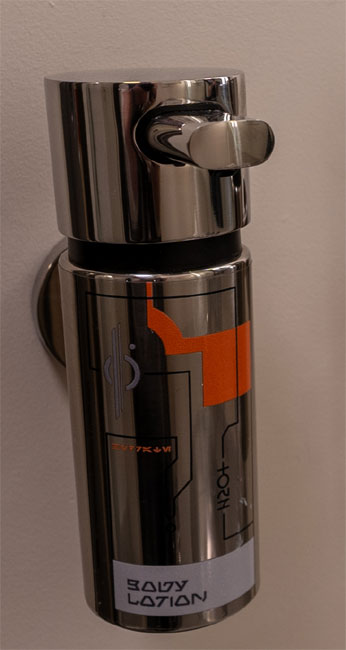 Can you read the Aurebesh on this dispenser? Photo by Danny Shuster 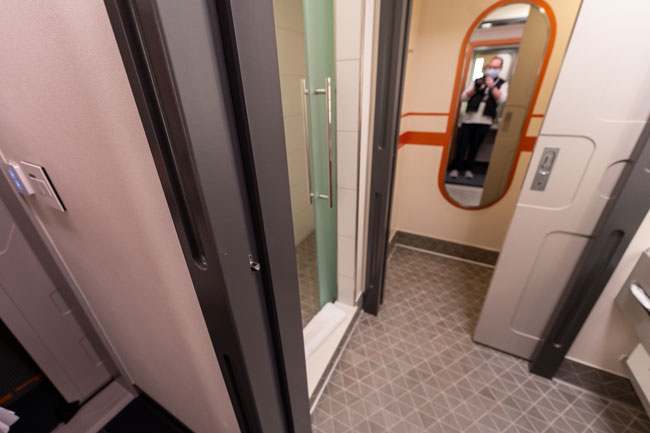 Danny checks out the bathrooms. Photo by Danny Shuster 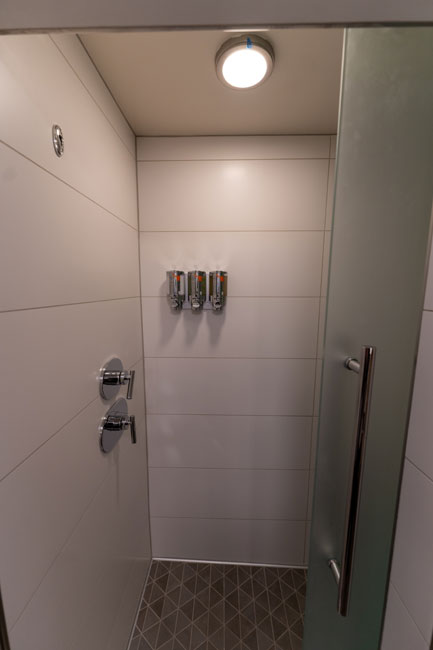 The shower in a standard room. Photo by Danny Shuster

How Many People Can Does a Starcruiser Room Sleep?

How Large is a Standard Galactic Starcruiser Room?

Walt Disney World has yet to release exact square footage for each room type.

They look to be about the size of a Deluxe Disney Cruise Line Inside Stateroom, but we will update with the exact numbers as soon as they are released!

How Many Rooms Are In Galactic Starcruiser?

There are 100 rooms aboard Star Wars: Galactic Starcruiser.

The rooms in this Star Wars hotel are situated across three levels—decks four, five, and seven.

How Much Does It Cost To Stay Here?

“How much does it cost to stay in the Star Wars hotel?”—it has to be our most frequently asked question. Much like cruise pricing, your per-person cost will depend on how many people are in the room. We currently only have prices for the Standard Cabin:

The One-Bedroom Galaxy Class and Grand Captain Suite are luxurious experiences. We suggest booking with a travel agent to ensure you get the best price!

Does the Star Wars Hotel Room Listen To My Conversations?

There is an in-room assistant to help with your needs aboard Starcruiser. Much like an Alexa or Google Home, this device has an ear out for commands.

Per Disney, “Disney uses the recordings to improve D3-O9, and in compliance with laws and our Privacy Policy, which may be found at the footer of The Walt Disney Company’s website. You can activate D3-O9 in your cabin by pressing the “Droid Link” button and D3-O9 will deactivate if you press the “Droid Link” button again or on her own after a period of non-use. Guests will also have the option to disable the D3-O9 experience in their cabin.”

Stay tuned to our YouTube channel for adventurous videos and more photos inside Galactic Starcruiser.