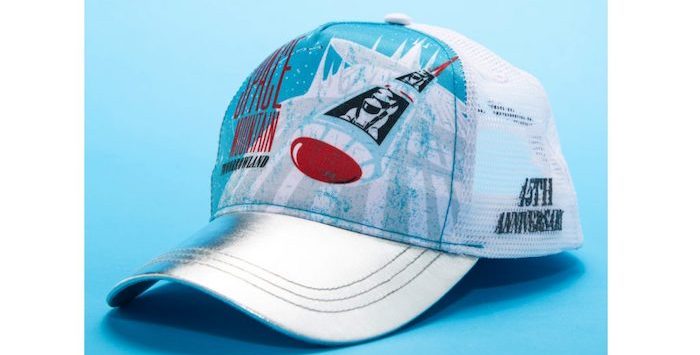 The cover of our January issue of WDW Magazine features a sight you may know well—the majestic, incomparable, Space Mountain.

How fitting, then, that on January 15th, 1975, Walt Disney World opened two new attractions in Tomorrowland: Space Mountain and the Carousel of Progress. In celebration of the 45th anniversary of these two rides, Walt Disney World is releasing special, limited-time merchandise only available at Walt Disney World while supplies last.

While many guests were likely familiar with the Carousel of Progress (previously debuted at the World’s Fair and Disneyland), Space Mountain was the first ride of its kind and the first thrill ride at WDW. 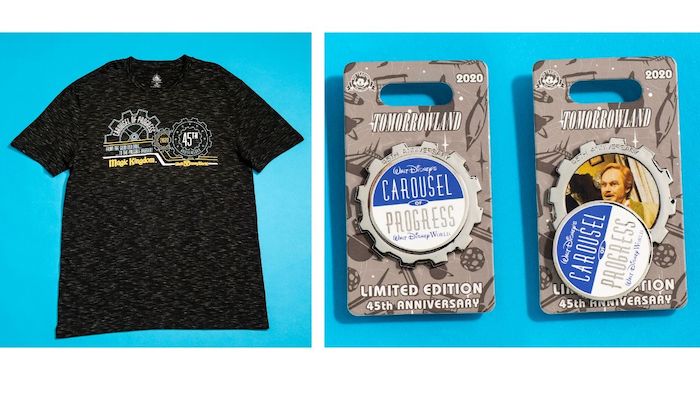 Get a commemorative pin or t-shirt for the 45th anniversary of the Carousel of Progress at WDW. Courtesy of Disney Parks Blog

Walt Disney’s Carousel of Progress is an exploration of history and progress through the years, using a rotating theater to showcase 4 generations of an audio-animatronic family traveling through the 20th century (and beyond). The patriarch of the family discusses the technological advances in each era while singing that ear-worm of a song “There’s a Great Big Beautiful Tomorrow.” (Are you singing it now? I am.)

This ride was first at the 1964-1965 New York World’s Fair where it was one of the most popular attractions. In 1967, after the World’s Fair, Disney moved the attraction to Disneyland. It closed in 1973. The then ride made its final move to its current location and opened in Tomorrowland at Walt Disney World on January 15th, 1975.

To say the Carousel of Progress is full of nostalgia would be an understatement. While it may not be the most thrilling ride at the park, it serves as a reminder of Walt Disney’s personal commitment to the theme parks and to never-ending progress for them. I can’t say it’s my favorite ride, but I never miss the opportunity to take a spin on this classic stage show.

Disney is offering a limited edition pin and t-shirt in celebration of the 45th anniversary of the ride finding its home at Walt Disney World. The pin is shaped like a gear, with a locket-type image underneath the ride’s logo. As a huge sucker for collecting Disney pins, I would jump on the chance to get this clever souvenir. 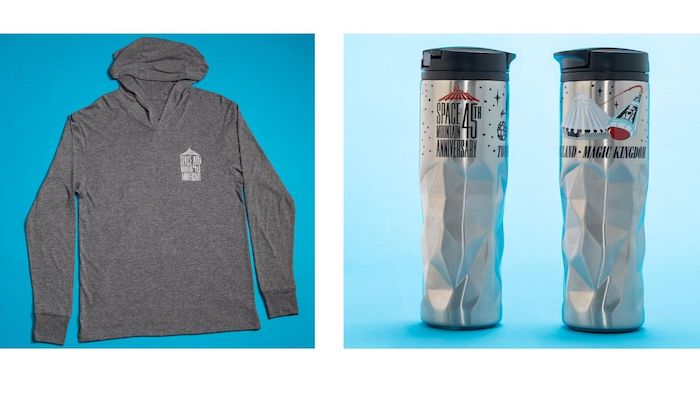 Get a hoodie or a tumbler to honor the 45th anniversary of Space Mountain. Courtesy of Disney Parks Blog

Walt himself first dreamed up the concept for Space Mountain as a ride to go in Disneyland’s version of Tomorrowland—the ride began to take shape with the help of Imagineer John Hench. The ride, however, was put on hold for various reasons and wasn’t added to Disneyland in the 1960s (the original plan).

Shortly after Magic Kingdom’s opening in 1971, Disney began bouncing around ideas for more thrill rides to hold the attention of their teenage audience. Designers pulled out the plans for Space Mountain and decided it would be the perfect fit for WDW’s Tomorrowland. Thus, on January 15th, 1975, Space Mountain opened and quickly became a fan favorite.

The attraction now has versions in five of the six Disney Resort parks around the world, including Disneyland. 45 years after Space Mountain opened, the queue can still climb to an hour or longer, speaking to its popularity and longevity. I for one love riding it—and I usually try to get in more than one ride. 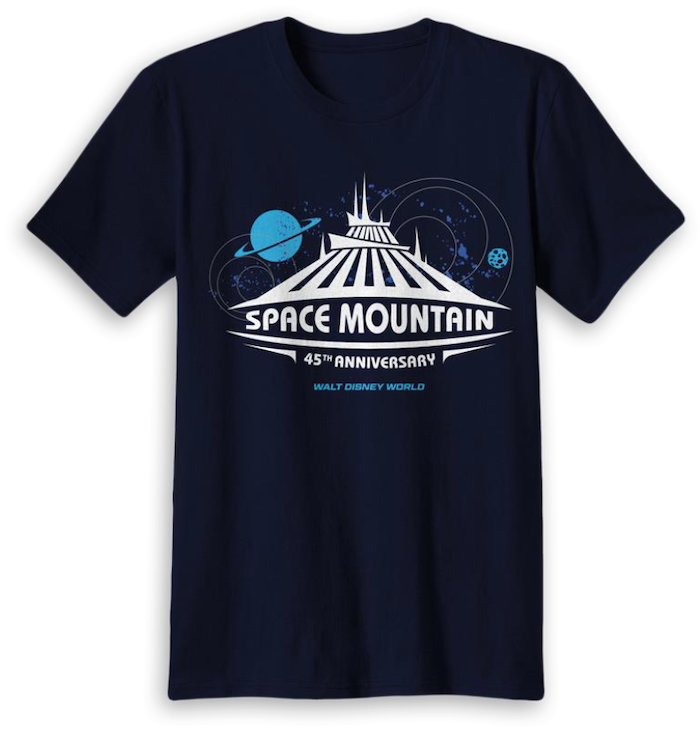 Disney has an abundance of items available for fans of Space Mountain, including a hoodie, tumbler, baseball cap, pins, and t-shirt. The hoodie and tumbler are pictured above, and the baseball cap is at the top of the page. The t-shirt is available at the customizable merchandise kiosk inside Tomorrowland Light & Power Co. as an on-demand souvenir.

If I had to pick between the tumbler and hoodie, I would pick… the hoodie. No, the tumbler. Can I just get both? The baseball cap design is really cute, but I would pass it up, as I’m not a hat-wearer. 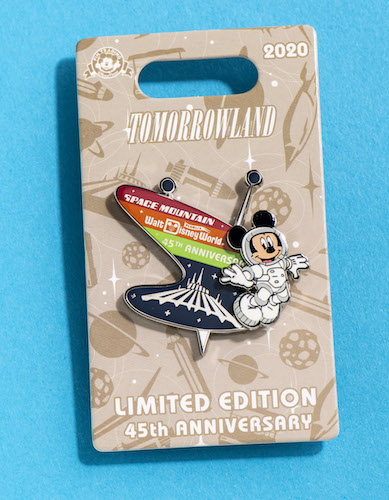 How cute is this Mickey Astronaut Pin? Photo Courtesy of Disney Parks Blog

Annual Passholders get their own limited edition Space Mountain anniversary pin, and I am pretty sad I’m not a Passholder. Minnie and Mickey riding Space Mountain together, and it glows in the dark?! 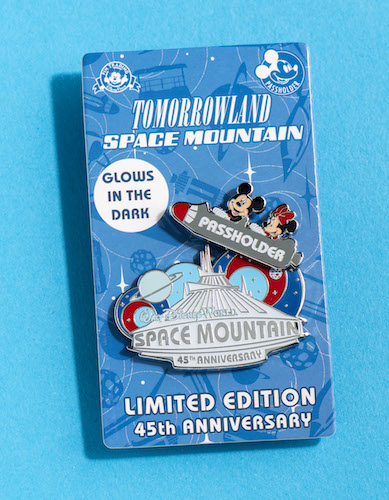 If you’re looking for something a little more classy to commemorate Space Mountain, head over to Uptown Jewelers on Main Street, U.S.A. for an exclusive PANDORA charm. 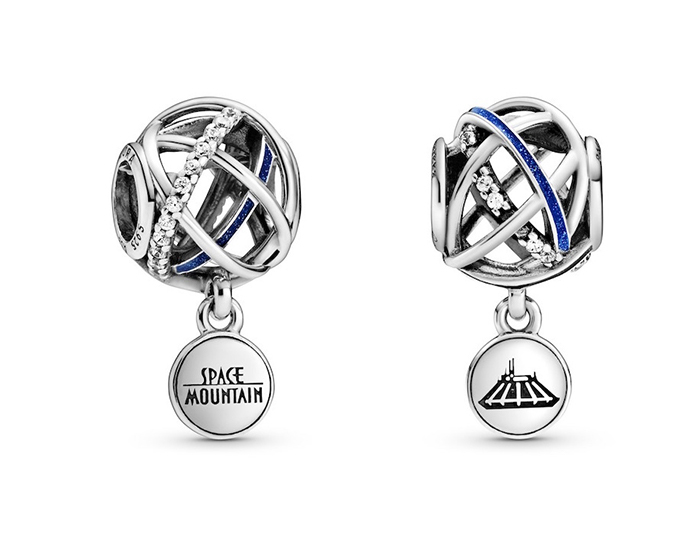 Add a new charm to your Pandora collection with this limited edition Space Mountain bauble! Courtesy of Disney Parks Blog

Drop by the Tomorrowland Light & Power Co. on January 15th to get these commemorative items for Space Mountain and Carousel of Progress. Items are limited edition and are available as long as supplies last. All merchandise is in-park only and can’t be found on shopDisney.com!