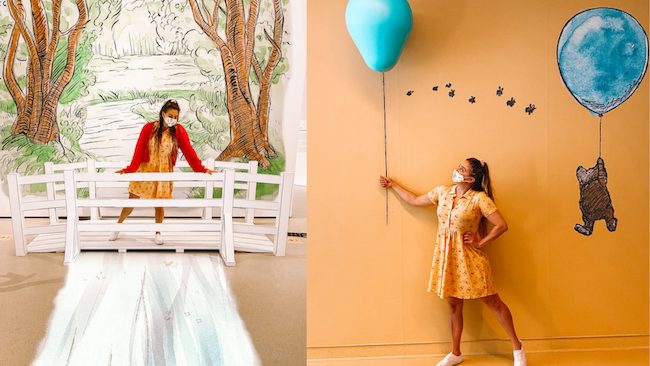 The new Winnie The Pooh-Exploring a Classic exhibit at The Royal Ontario Museum (ROM) until January 17, 2021. I visited the exhibit over the weekend with my friends Cole and Nathan for a fun and interactive afternoon!

If you are based in Toronto, or the Greater Toronto Area, and love Winnie the Pooh and all of his adventures, then you won’t want to miss this exhibit.

The exhibit features original sketches from illustrator E.H. Shepard, artifacts, and interactive props, so this exhibit is fun and engaging for all ages. 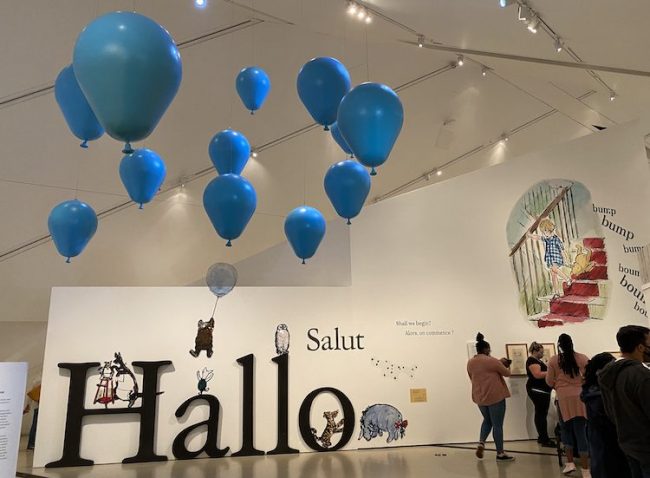 When you enter the exhibit you are greeted with a picture perfect hello! Photo by Alessandra Sferlazza

Although I knew Winnie the Pooh’s origin story, I appreciated the in depth detail and research that was on display.

Here are some of the fun facts that I took away from the educational aspect of the exhibit.

The start of the exhibit begins by explaining the origin of Winnie. Did you know Winnie was a real bear? She (yes she) was a black bear Harry Colebourn purchased a cavalry veterinarian from Winnipeg.

Harry Colebourn was traveling from Winnipeg to a military training camp based in Quebec when he spotted a bear cub for sale on the side of the tracks.

Winnie was named after Harry Colebourn’s hometown, Winnipeg, and Winnie soon became a mascot for military bases, and her playful nature would build morale among the soldiers.

How Did Winnie inspire A.A. Milne?

After WWI, Harry Colebourn was relocated to England, which is how Winnie the black bear ended up finding her home at the London Zoo.

Harry Colebourn donated Winnie to the London Zoo because of how much Winnie was loved by the people who’d visit the zoo. She became the most popular animal that the Zoo housed, and a young boy named Christopher Robin, was one of the visitors who adored Winnie.

A.A. Milne, the author and creator of Winnie The Pooh, would take his son, Christopher Robin, to visit his favorite animal at the London Zoo.

Winnie was a notoriously friendly bear—she learned how to socialize with humans during her time with the soldiers.

Winnie was so friendly and gentle with children, the zoo offered rides on Winnie’s back. Christopher Robin playing with Winnie at the London Zoo inspired the adventures of the characters in A.A. Milne’s stories of Christopher Robin and Winnie the Pooh. 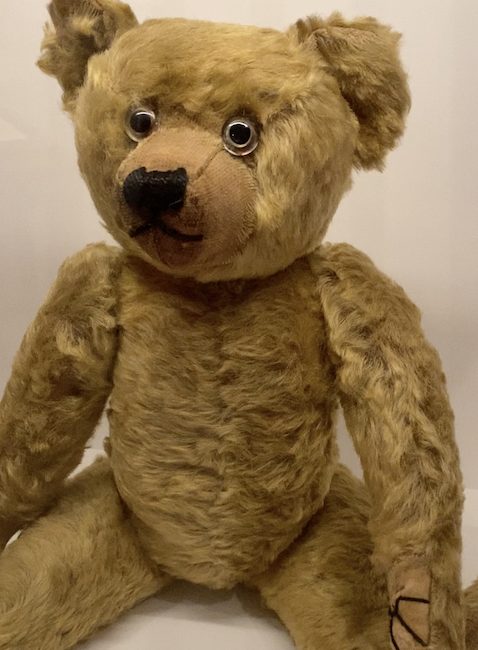 This is the bear that E.H. Shepard modeled Winnie The Pooh illustrations after! Photo by Alessandra Sferlazza

Christopher Robin’s bear was made by Stieff, and the same kind of model was on display in the exhibit.

Photos in The Hundred Acre Wood

I enjoyed the fun facts and original sketches in the exhibit, but there was also another draw that brought Winnie the Pooh fans to the exhibit. The photo ops!

Whether it is in life-sized trees modeled after the original illustrations of The Hundred Acre Woods or a walk over a bridge with a projection waterfall, the photos you take will suck you right into Winnie’s storybook. 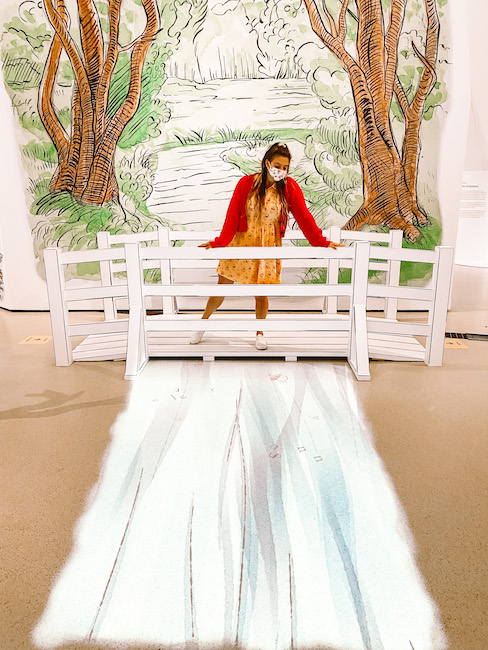 Taking an afternoon stroll through The Hundred Acre Woods. Photo by Alessandra Sferlazza 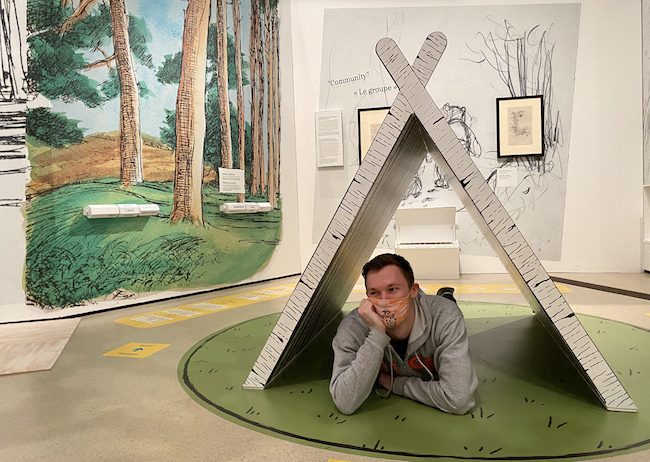 They even had every Disney fan’s favorite… painted walls! 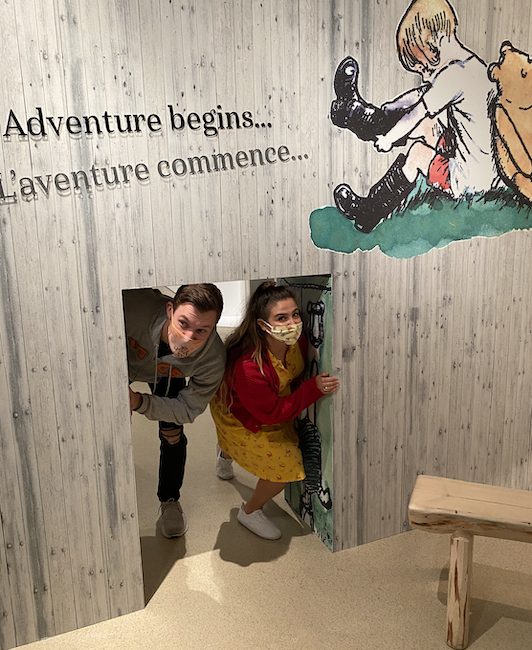 There are so many interactive aspects to the exhibit! The little ones will have lots to do. Photo by Alessandra Sferlazza

Safety Procedures at The ROM

Rest assured that there are social distancing procedures in place to keep visitors safe. Masks are required inside the museum, and the exhibit is limited to a certain amount of people at a time. 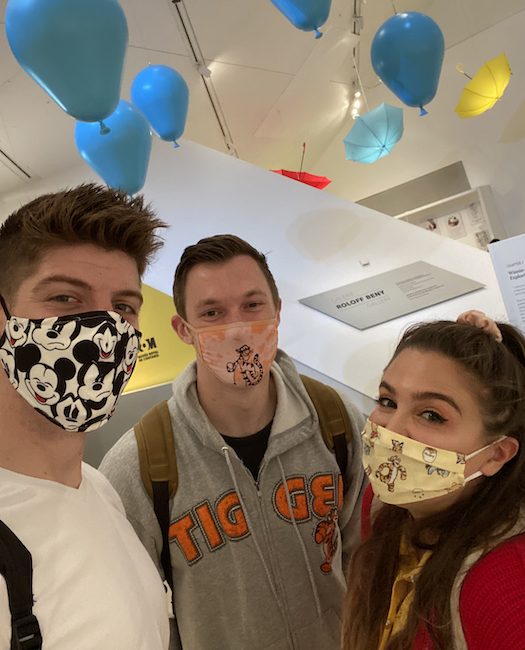 Masks are mandatory, so we rocked the most themed masks we had! Photo by Alessandra Sferlazza

To ensure that everyone is able to fully experience this limited-time exhibit, visitors can select a time slot for their entry time.

You can shop for the masks shown in my photos here from Malibu Mermaid Co.

Get your tickets here for the exhibit.

Do you love being “in the know” of Disney news? Subscribe to our newsletter to stay in the loop!