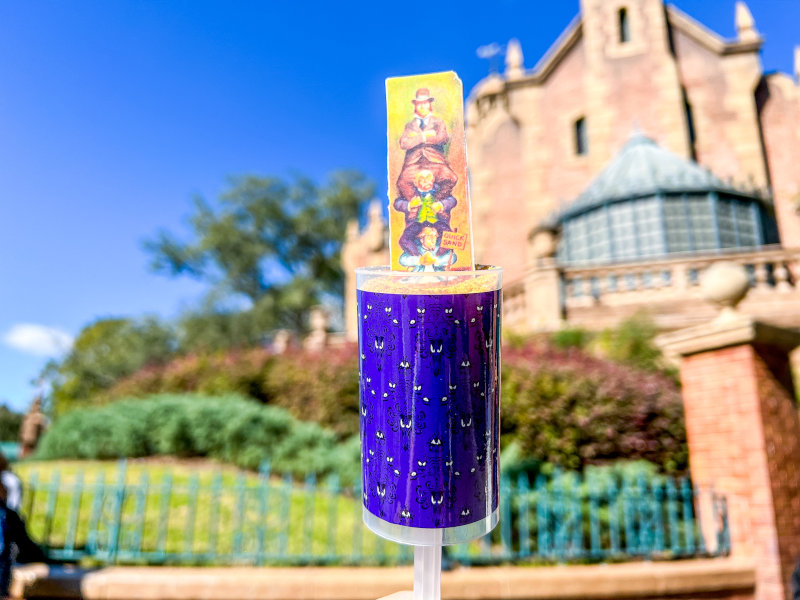 Have you tried any of the new Magic Kingdom 50th anniversary snacks that launched this month? I had my eye on quite a few, so I strapped on the bib and ate my way around Magic Kingdom. Here’s my review of the snacks I tried.

I love to eat, so when Disney announced nine new snacks debuting at Magic Kingdom in celebration of the 50th anniversary, I booked myself a park reservation to try some out.

There is a mixture of sweet and savory on the menu—and even some new drinks! I’ll share details of each new snack and reviews of the ones I tried. 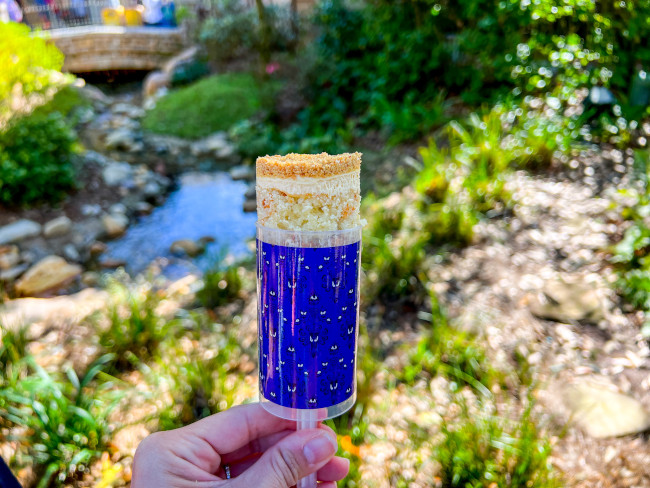 I love cake pops because they’re portable and fun to eat, and this one happened to be delicious. The vanilla cake was moist, and I loved the sweet caramel buttercream. Because the cake is so soft and moist, it was a little messy to eat. Next time I’ll enjoy it with a spoon! 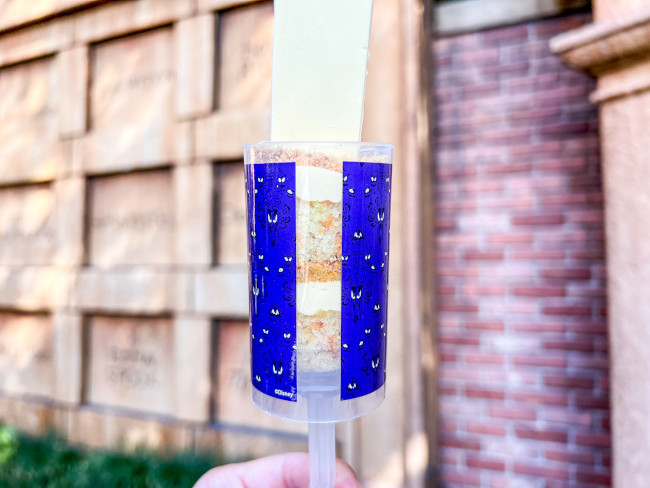 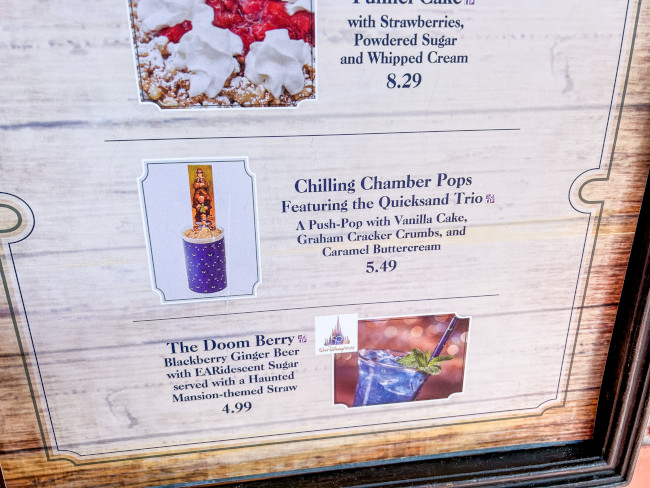 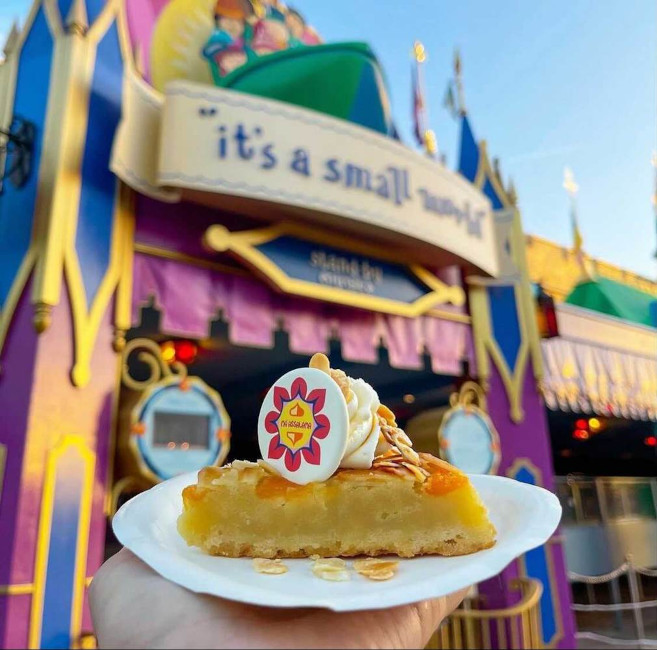 The description on the menu reads “orange and almond tart topped with orange blossom cream and roasted almonds.” I haven’t tried this one yet but intend to get it on my next trip. 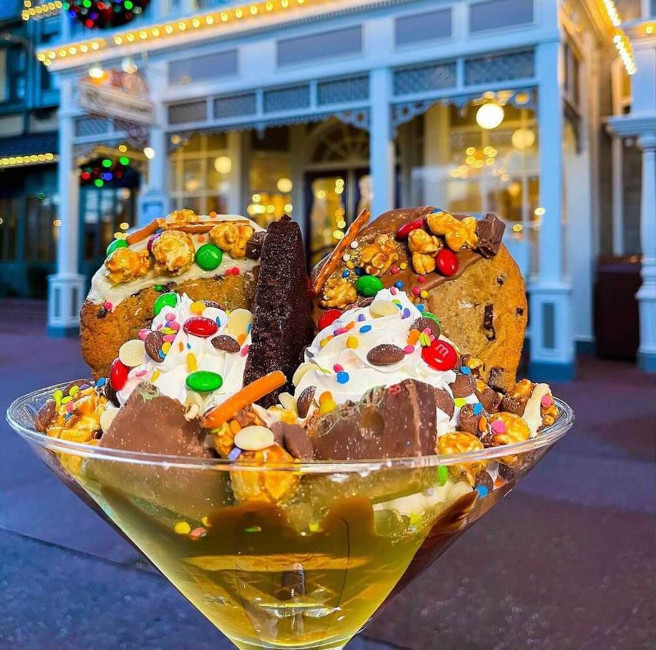 In order to enjoy this massive dessert, you have to dine at the Plaza Restaurant in Magic Kingdom. This dessert mixes sweet and salty with a Mickey pretzel, ice cream, hot fudge, caramel sauce, and whipped cream and is topped with EARidescent sugar. It’s big enough to be shared by four people. 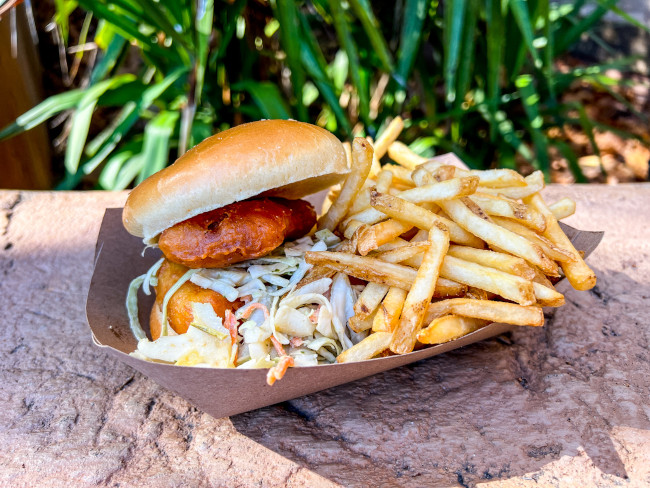 Out of the two savory treats among the new Magic Kingdom 50th anniversary snacks, I went with the fish sandwich because I’m a big fan of coleslaw, and the cilantro lime slaw was calling my name. The fish was breaded and fried well; however, I was expecting a much creamier and saucier slaw. WIthout a sauce, the sandwich turned out to be a bit dry to eat.

If I had it to do over again, I might’ve spent my savory budget on the flatbread. 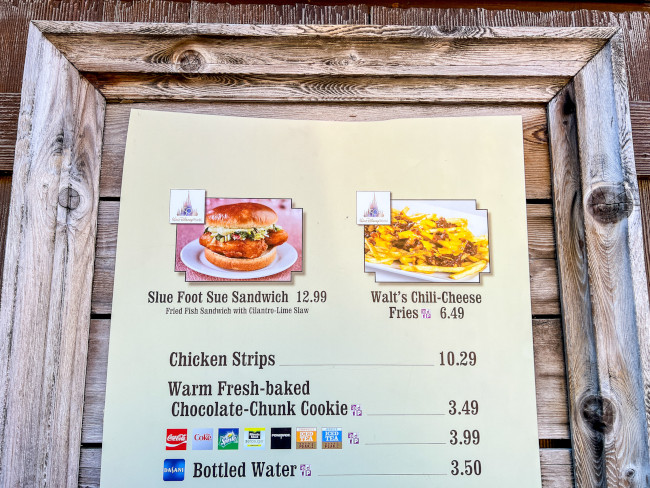 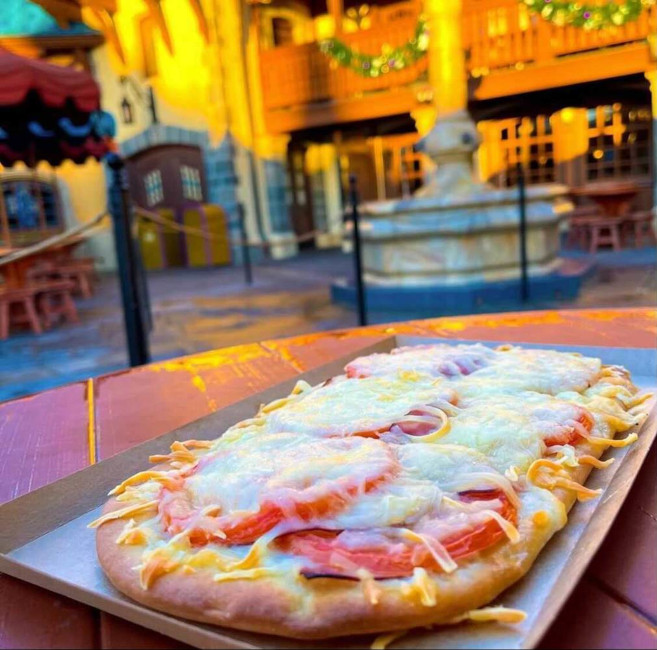 The flatbreads at Pinocchio Village Haus are always a good portion, and I like when they debut special flavors. This flatbread is topped with bechamel, sliced ham, tomato, and gruyere. 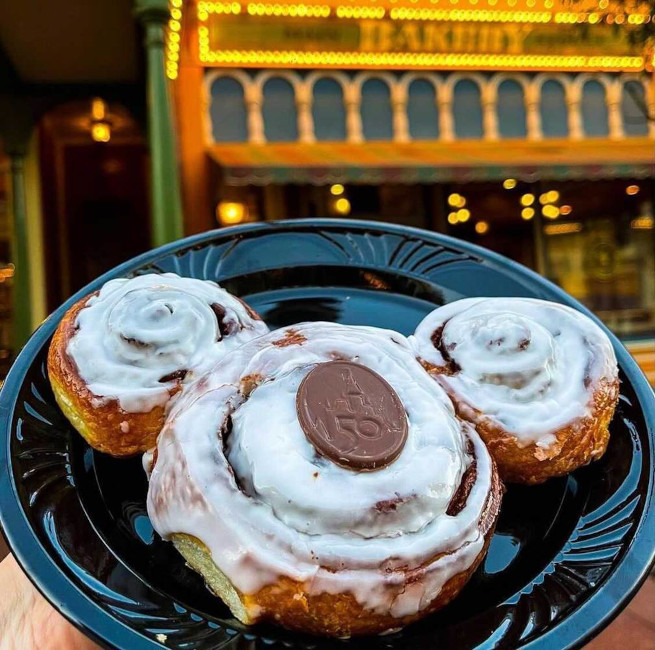 I’ve seen pictures of this Mickey-shaped cinnamon roll, and it is massive! What makes it special is that it’s dusted with EARidescent sugar and the 50th pressed penny logo. 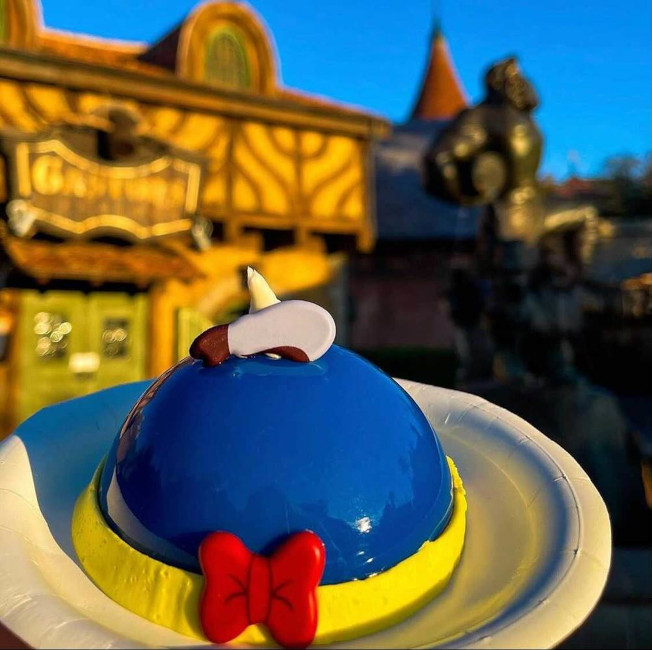 Donald Duck must be so happy that he now has his own dome-shaped cake, and his is filled with lemon mousse, blueberry filling, citrus cake, and buttercream. I’m a huge fan of those flavors and can’t wait to give it a try! 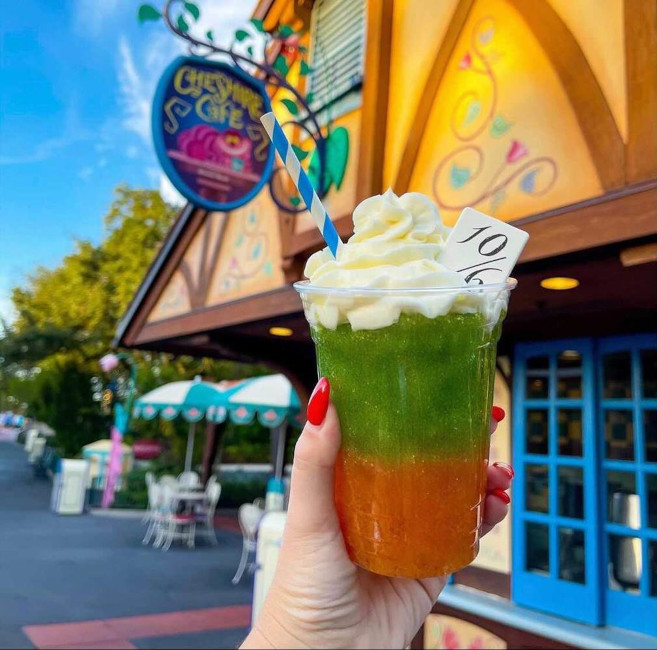 A sweet and sour combination of mango with sour apple slush topped with whipped cream and a white chocolate medallion. I would definitely give it a big swirl to get that fun flavor combo! 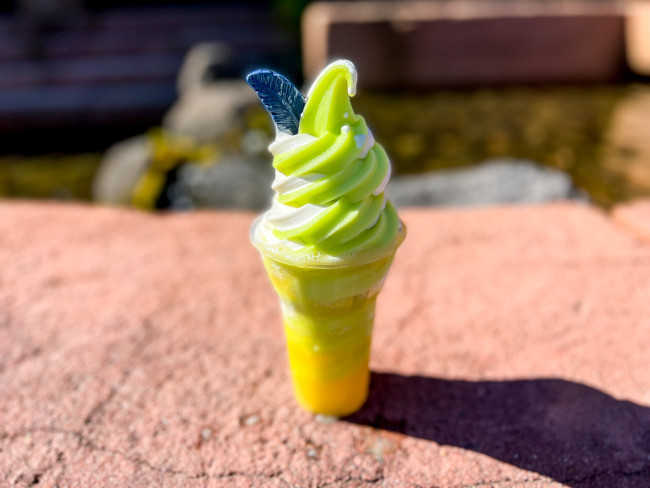 I’m a huge fan of all the specialty floats at Aloha Isle, so I had to give the new Crooning Flower Float a try. Lime is my favorite flavor of Dole Whip, so I knew I would enjoy this treat already. The vanilla swirl balanced the tartness of the lime, and it all paired well with pineapple juice. 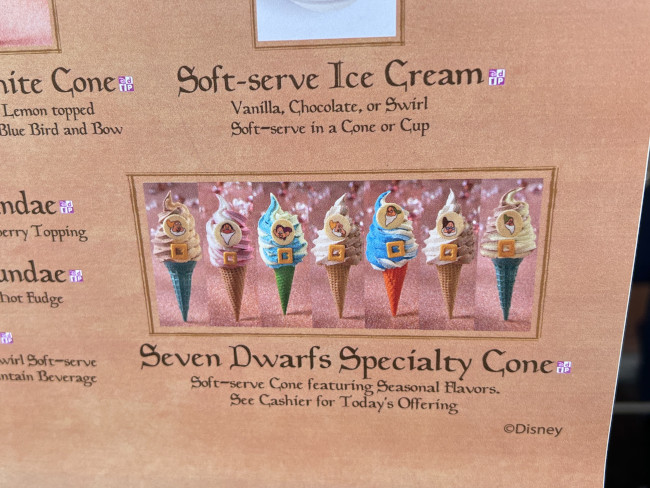 Seven different cones, depending on the day of the week. Photo by Tina Chiu

This treat was not released as part of the new batch of Magic Kingdom 50th anniversary snacks; however, it is too cute not to share! Every day you can visit Storybook treats for a different dwarf specialty cone. The flavor of the day is displayed by the cashier window.

Tina is a mom of two boys and loves sharing the joy of Disney with her family. She collects Minnie ears, participates in RunDisney races (mostly for the bling), and enjoys staycations with DVC. Tina hopes to one day retire on the Disney Dream, but until then she’ll continue living her very best life, one character meet and greet at a time! Follow along on Instagram

Tina is a mom of two boys and loves sharing the joy of Disney with her family. She collects Minnie ears, participates in RunDisney races (mostly for the bling), and enjoys staycations with DVC. Tina hopes to one day retire on the Disney Dream, but until then she’ll continue living her very best life, one character meet and greet at a time! Follow along on Instagram