REVIEW: It’s a Small World! Board Game from Funko Games 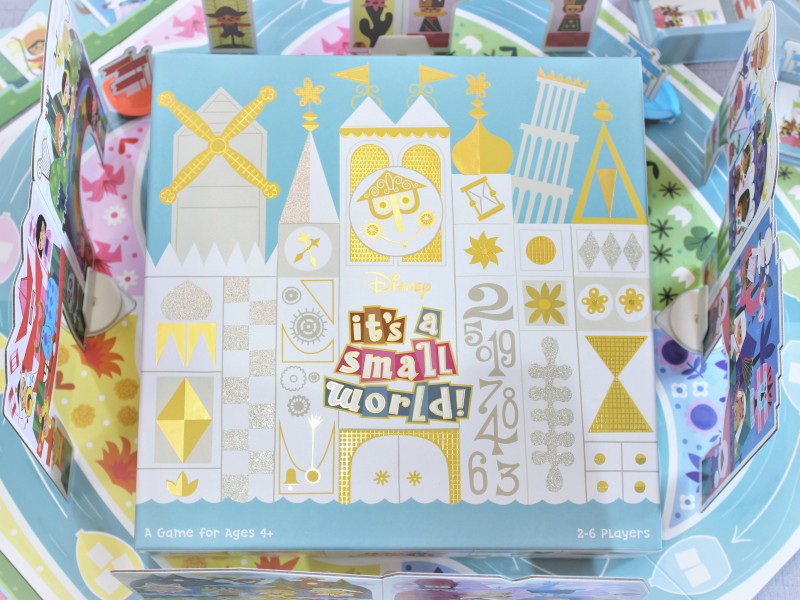 Here, we review the brand-new It’s a Small World! board game for children from Funko Games. Does this Disney children’s game capture the charm of the Magic Kingdom ride?

Few Walt Disney World attractions are as iconic as the Magic Kingdom’s “it’s a small world.” From its catchy song to its globe-spanning animatronic cast, this whimsical ride has entertained families for generations.

Funko Games has recreated the charm of this beloved Magic Kingdom ride in a way that captures the spirit of Walt Disney’s vision while making it interactive and enriching for young children.

The newest title in the line of Disney Parks-themed board games released by Funko Games, It’s a Small World! invites 2-6 children to embark on a journey through the four rooms of the bellowed ride and identify people and animals from around the world.

As a game designed for children ages 4 and up, it’s a fun opportunity for young ones to practice their cooperation and visual processing skills.

Publisher Funko Games provided me with a copy of the game, I was eager to share it with our friends’ children and see if they enjoyed it. Here are my thoughts on the game, and if your family should buy a copy.

You should know, this article contains affiliate links. Please consider subscribing to our print edition if you’d like to support us directly, and feel free to sign up for our free newsletter so you never miss out on spotlights like these!

HERE’S HOW YOU PLAY IT’S A SMALL WORLD! 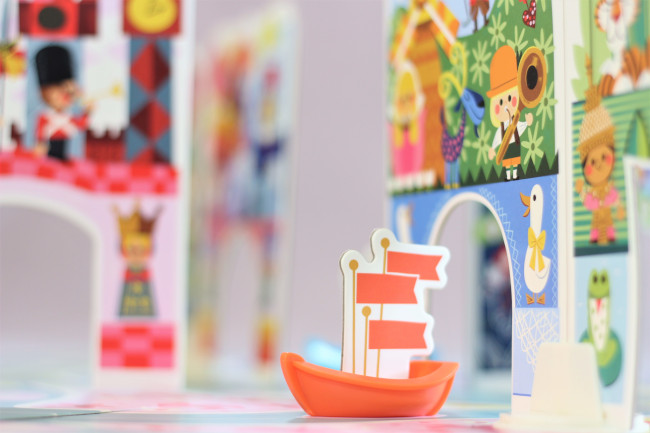 Each turn, a team will move their boat ahead along the waterway following the arrows, advancing one space. The team will draw a number of cards from the deck matching what’s shown on the space they move onto.

Then, everyone on that team has the opportunity to see if any of the cards they possess — ones they already have and ones they just drew — match any people or animals on the walls of the room they’re located in. If they spot a match, they add that card to the team’s collective score pile.

How does the game end? If any if the cards drawn at the beginning of the turn show the clock face, they immediately rotate the clock tower dial so the number shown increases by one. 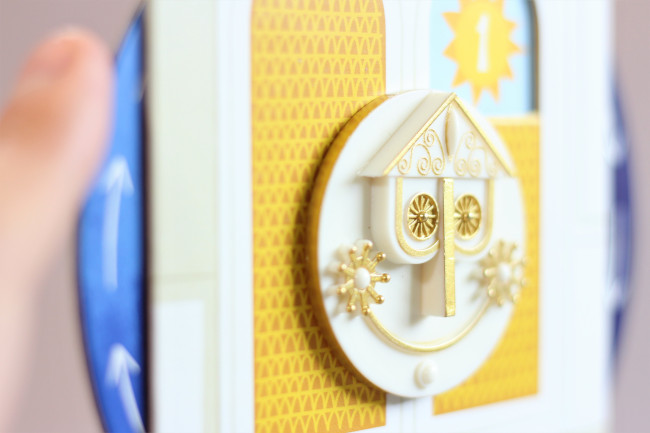 Once the clock tower standee displays the number six (or five or seven, if you prefer a shorter or longer game), which depicts the setting sun, both teams count up their scored cards and see who has accumulated the most matches. Any clock tower or flip cards drawn during play also are added to their score.

The team with the most cards wins! If everyone is playing cooperatively, try to gather 20 cards before the game ends to succeed.

HOW EASY IS IT FOR KIDS TO LEARN?

If you want to introduce your preschool-aged child to games that are slightly more complex than Candyland or Chutes and Ladders, the It’s a Small World! board game is an excellent next step. 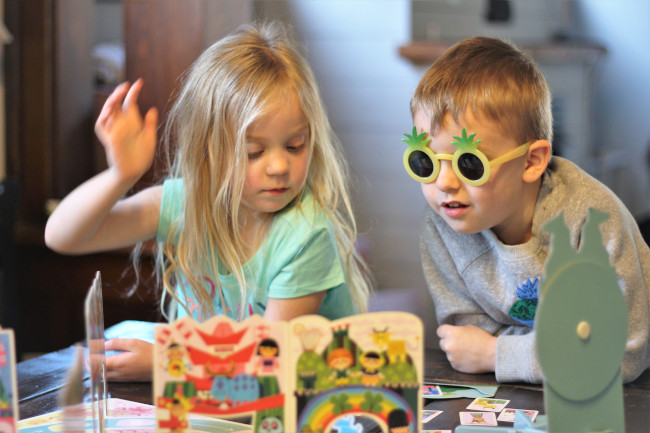 The rulebook is a tri-folded sheet paper filled with big, obvious visual aids that accompany every rule and phase of a turn. As an adult, you’ll need to read and teach the game to your child, but you can easily learn it right before playing It’s a Small World! for the first time.

The game is sensibly designed to be comprehensible for young minds, so you won’t encounter any confusing scenarios or obtuse rules that could obstruct your child’s ability to grasp what they’re supposed to be doing.

What I found when playing the game with little ones was that most children were be able to pick up on how to play and remember the general flow within the first few turns. 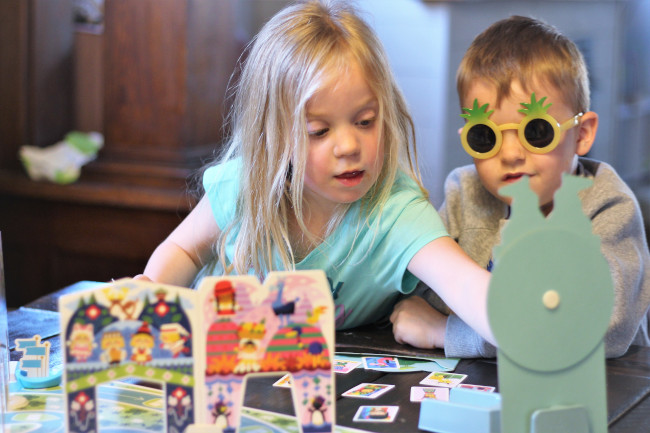 You just may need to remind them of certain rules every now and then. For instance, pointing out that they can’t earn points for matching pictures on walls outside the room they’re currently located in.

WILL YOUR CHILD ENJOY PLAYING IT?

Unlike so many other beginner children’s games that are simply time-fillers focused on getting to the finish line, It’s a Small World! cares more about using playtime as an opportunity to cultivate mental and social aptitudes. Each turn provides enjoyable, engaging opportunities for young children to practice counting, cooperation, and visual recognition. 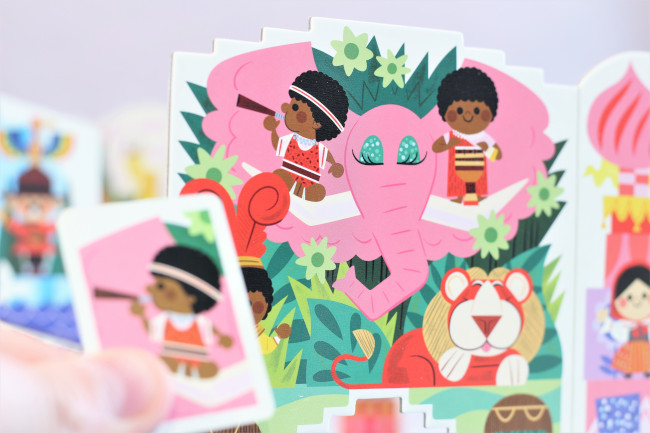 Of the two methods for playing, we found that children enjoyed playing as a unified team the most because it resulted in the least amount of downtime, providing everyone a chance to participate every turn.

When the children were divided into teams, the kids became bored waiting for their opponents to locate matching graphics, which could often take a while.

What’s unique about this game is that there is no “end space” on the board; the conclusion of the game is determined by clock tower cards being drawn, which could happen at any time.

While this may seem quite abstract for young minds, the excitement of not knowing when the game would end actually kept our children engaged and eager to see if they would keep going for yet another turn. 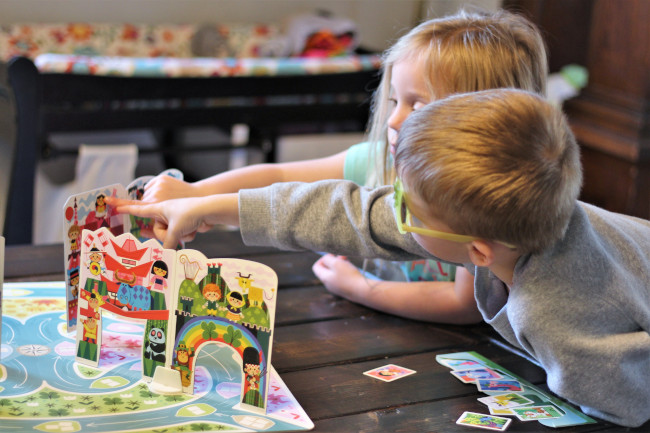 The one shortcoming we found with the game was that its long-term variability is limited. As the pictures on the walls are permanently affixed, a child’s thrill of “finding” an image wanes with repeated plays and growing familiarity with the walls’ artwork.

This won’t be a problem during their first or even fourth play-through, but will come as the child reaches elementary-school age. But, by that time, your child will be old enough to enjoy other Funko Games titles aimed at children ages 6 and up that you can play something with more variability and challenge.

As for your involvement in the game as an adult, It’s a Small World! designed squarely for its target age: 4–5-year-olds. It’s more of a children’s game as a family game, so your influence will be suited to coaching them along and guiding their play rather than participating directly. 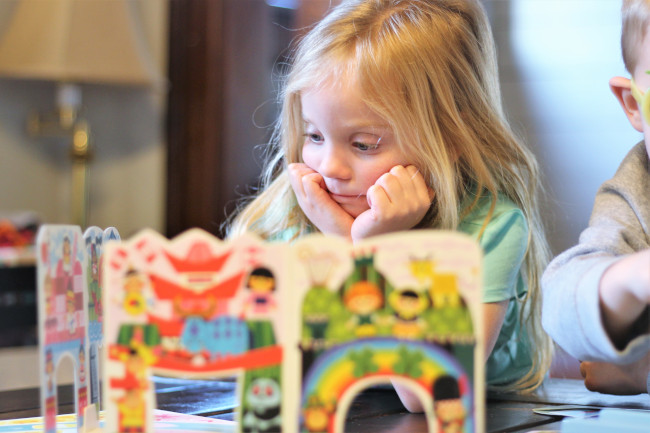 IS IT FAITHFUL TO THE REAL THING?

In case you haven’t noticed in the pictures thus far, It’s a Small World! is colorfully designed and brimming with visual flourish. Its portrayal of diversity is especially laudable, depicting an array of cultures and ethnicities from around the globe.

Although It’s a Small World is based on the Disney ride, it doesn’t rely on the IP as a surface-level selling point for making a quick buck. It’s a surprisingly faithful and unique game that stands out on crowded shelves.

If you’re familiar with the ride, you’ll appreciate all the small details this production incorporates. The box cover clearly mirrors the clock tower and gold-trimmed white buildings in the ride’s boarding room. The outfits of the children are clearly drawn from the attire of the original animatronic versions that inhabit the real-life ride. 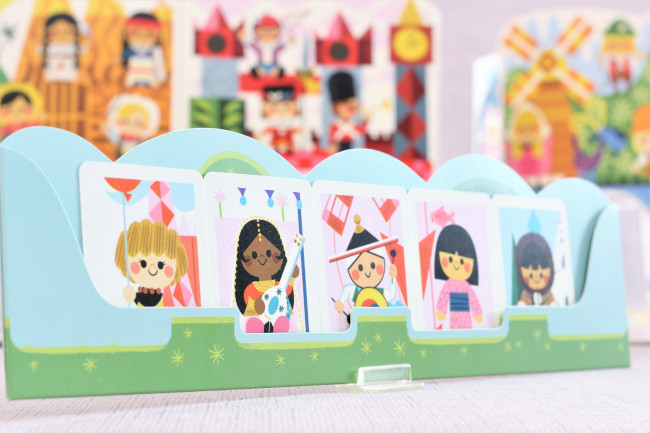 But those are added bonuses; you don’t have to be well-versed in the ride’s design to enjoy playing this tabletop counterpart.

Of course, you’ll have to provide your own soundtrack when playing the game and broadcast the catchy song from your phone.

With how affordably priced Funko Games products are, the It’s a Small World! board game is definitely a worthy purchase for your preschool-aged child to play with their friends. When your child grows out of it, the game makes an excellent gift or just a collector’s item for fans of the Magic Kingdom attraction.


Get your copy of It’s a Small World!