Review: Funko’s The Rocketeer Board Game Is a Real Blast 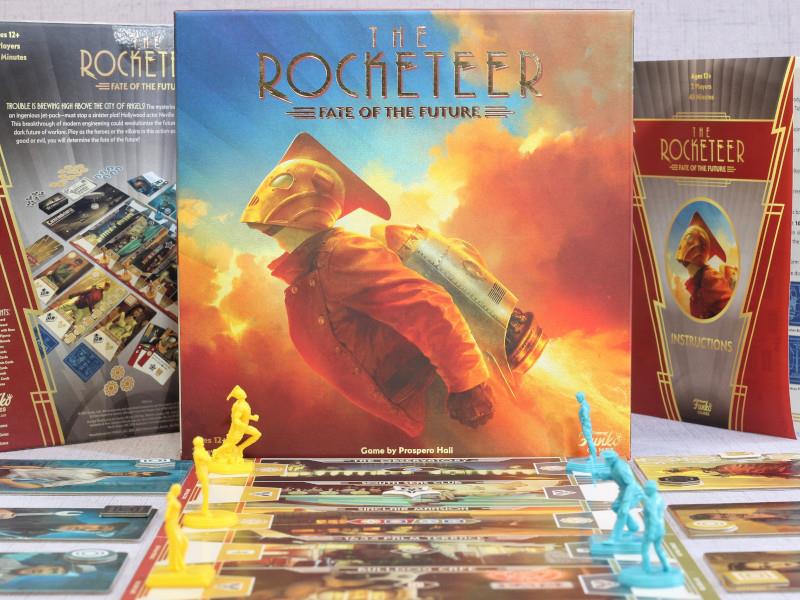 Get our honest review of the Funko Games’ new The Rocketeer: Fate of the Future board game, available for purchase now.

Over the past few years, Funko Games has released a slew of quality board games for young children and for families to play together.

But the publisher hasn’t produced many titles that would catch the interest of serious gamers, opting instead to provide casual gaming experiences that would appeal to a variety of people.

That changes with Funko Games’ newest release, The Rocketeer: Fate of the Future.

If you weren’t around in 1991, you might not remember this forgotten Disney gem starring Billy Campbell as a jetpack-wearing superhero who fights Nazis. This big-screen comic book adaptation was steeped in nostalgia for late 1930s Hollywood. 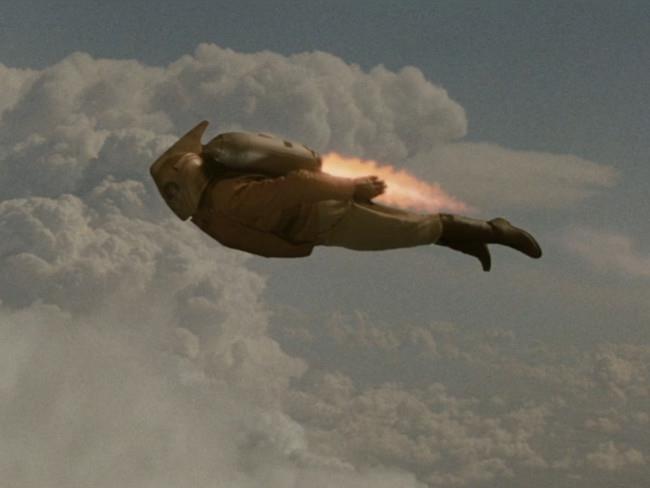 Though it earned tepid critical and financial success at the time, The Rocketeer has kept a loyal cult following over the years, making it a worthy property for Funko Games to adapt into its latest tabletop product.

The Rocketeer: Fate of the Future is a head-to-head clash for two players who reenact the struggle between the heroes and the villains of the film.

Publisher Funko Games provided me with a copy of the game, and I was excited to check it out since my parents introduced me to the flick when I was young. Here are my thoughts on the game and if you need a copy in your game collection.

Strap In and Play The Rocketeer 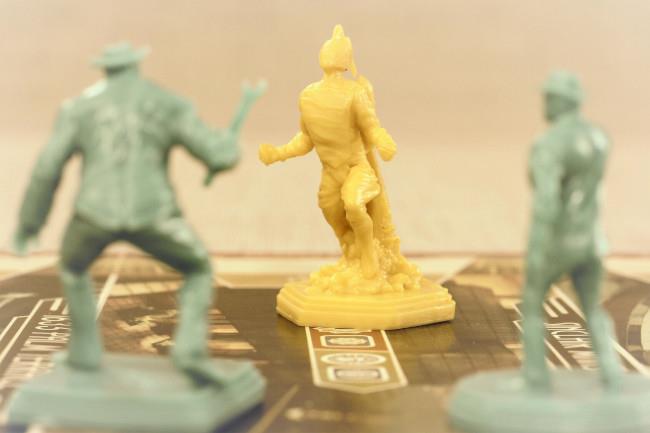 Each player controls a team of three characters. The heroes consist of Cliff, Jenny, and Peevy, while the villains are Sinclair, Lothar, and Valentine. Decide which side you’ll be and take the corresponding card deck, character boards, and figurines for your side.

You’ll set the scene following the directions provided, which includes laying out the main game board that consists of six locations from the movie: the South Seas Club, Sinclair Mansion, 1635 Palm Terrace, the Bulldog Café, Chapel Airfield, and the Observatory. The majority of the game takes place across these six locations.

On your turn, you’ll activate one of your three characters and play cards from your deck to perform actions like moving that character to a different location, building their clout or grit, or instigating tussles with the opposing player’s characters.

What’s your goal? Find out which opposing character possesses the rocket blueprints, and knock them out in a tussle to obtain those plans. If you are in possession of the blueprints, you must keep them away from your opponent.

Stealing the plans and holding them at the end of each round earns you Finale cards, which are worth points. There are other ways to earn Finale cards throughout the game, and you’ll want to obtain as many as you can to ensure you have the most points at the end of the game.

You’ll begin each round by drawing a card with a newspaper headline, which advances the Luxembourg Zeppelin along a path from Lakehurst to Los Angeles. When it reaches the west coast, that signals the last round of the game. Finish the final round and see who has accrued more points.

How Faithfully Does the Funko Rocketeer Board Game Follow the Film?

If you’re familiar with the plot of Disney’s 1991 motion picture, you’ll have already noticed how faithfully the synopsis and elements of the board game reflects the general plot of the film. 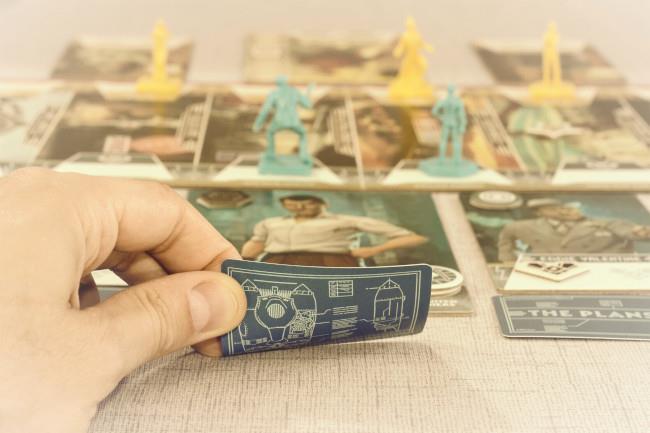 The Rocketeer: Fate of the Future was clearly designed for fans of the film, as its creators packed in as much material from the movie as possible, from the characters to the locations to the events.

Every action card in your deck has some reference to a line of dialogue or situation from the film, so it feels like you’re recreating the on-screen happenings—or rewriting them, if you win as the villains!

Another way that the game really excels at paying homage to the film is its use of Art Deco in the visual design, such as the rigid lines, sharp angles, striking colors, and glamorous details (like the gold foil embossing on the box).

As Art Deco was a major component of the film’s art design—down to its initial theatrical poster—this is a welcome element that really sets the 1930s scene.

Is The Rocketeer: Fate of the Future a Good Game?

It’s not uncommon for a movie to be adapted into a board game, but it is uncommon for that game to actually be good. Thankfully, The Rocketeer: Fate of the Future does a lot of things right.

I’ve played—no joke—hundreds of board and card games designed for exclusively two players. It’s become a niche that my wife and I are obsessed with exploring.

When gauged against the many other two-player games we’ve played, I’m happy to say that The Rocketeer: Fate of the Future does a great job embracing the head-to-head nature of the limited player count and using it as a foundation for a tense tug of war. 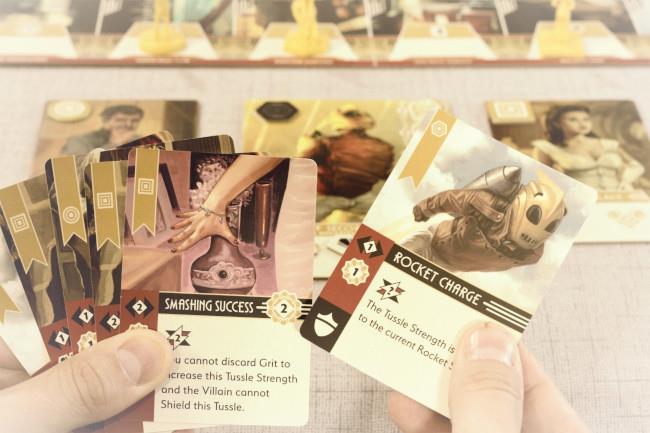 The strategic challenge comes from deciding how to best use the random cards you’ve drawn to maximize their influence on the situation. Which character do you activate first? Where should they move? How many cards should you use now or save for later? The game gives you a lot of freedom each turn to decide these things.

Even if you think you’ve determined the best course of action, be prepared for wrenches to screw with your plan: random event cards, not drawing cards you want, your opponent knocking you down. The result is a fast-past altercation that largely consists of pummeling other characters, knocking them down, standing them back up, and leaping back into the fray.

Keep in mind that this isn’t a game for kids, as the box suggests players be at least 12 years old to play. Even for adults, your first playthrough may be a learning experience as you iron out your comprehension of certain rules. A typical playthrough takes 4-5 rounds and lasts a brisk 45 minutes.

Funko Rocketeer Board Game Review: Should You Put This Disney Game on Your Wishlist?

Because it leans heavily into the movie as its source material, The Rocketeer: Fate of the Future may not connect with those who haven’t seen the movie.

To determine if you should buy the game, consider these questions: Do you like The Rocketeer? Do you like board games that make you strategize? Do you want something you can play with your partner after the kids go to bed? 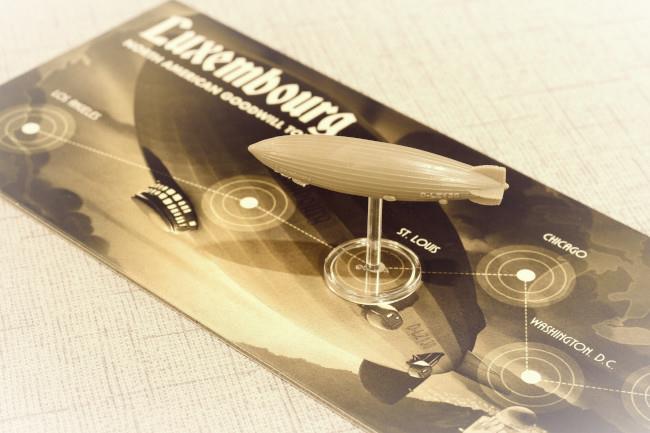 The game features the usual quality component production of Funko Games, from the Los Angeles map inlay in the box cover to the highly detailed miniatures. And typical of Funko Games, it’s a good price for the game you get—whether you buy it for yourself or as a holiday gift for someone else.

If you’re a fan of The Rocketeer and consider yourself a board-gamer, this is a must-buy. If you’ve never seen The Rocketeer, you may not find the game as appealing. But now is a good a time as any to check out this underappreciated Disney gem! 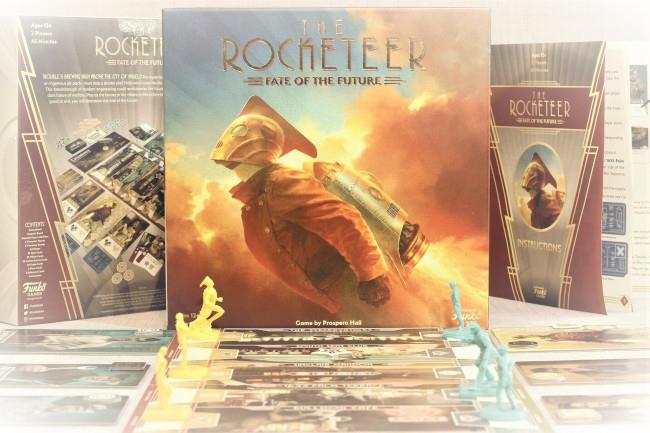 Looking for more Disney game reviews? We’ve got a few on the site (including It’s a Small World! and the Guardians of the Galaxy video game), but we’ve also dedicated some space in our print magazine to in-depth reviews with stunning photography.

Check out these back issues for some Disney board game fun:

REVIEW: Marvel’s Guardians of the Galaxy Game by Eidos-Montréal

REVIEW: It’s a Small World! Board Game from Funko Games