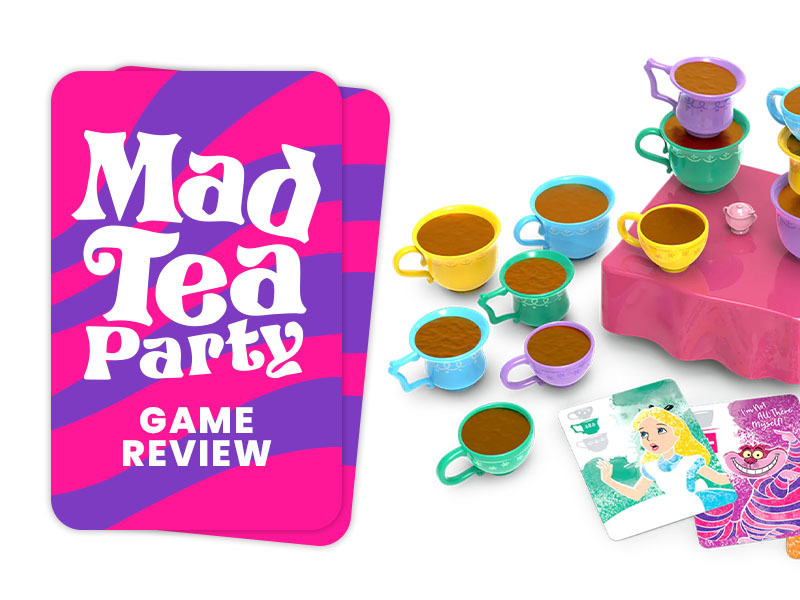 The folks at Funko games are back with another entry into their growing catalog of Disney attraction-inspired games: Disney Mad Tea Party Game, which is themed on the Disney classic movie, Alice in Wonderland. I was lucky enough to get to review this game, and I’m excited to share my thoughts with our readers! 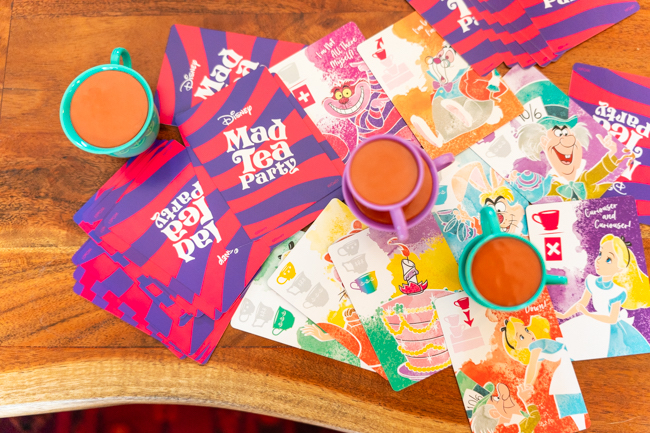 The game components are fun and bright. Photo by Danny Shuster

The first thing that struck me about this game is the beautiful box artwork with enhanced foil printing, plus the excellent tea cup game pieces. We’ve noted this before in our Funko reviews, but the quality of the pieces, the design, artwork and attention to detail are all top-notch and something we have come to expect from Funko. From the first glance at this game, you just know it’s going to be fun to look at, and probably fun to play as well. Let’s dig in!

The premise of the game is pretty straightforward: you’ve been invited to a tea party, but in typically Alice fashion things aren’t always as they seem. 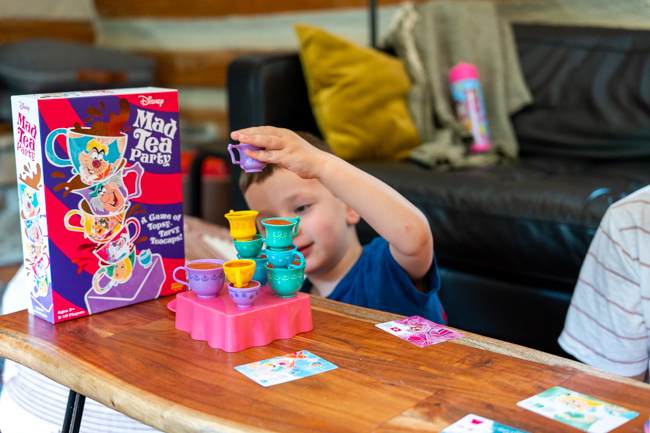 “I have an excellent idea. Let’s change the subject.” Photo by Danny Shuster

The game play revolves around stacking an increasingly precarious pile of plastic teacups atop a pretty pink party table. Players take turns drawing and playing cards with various modifiers that increase or decrease the difficulty by determining what size cup to stack next, or if you can start a fresh stack versus building upon existing cups etc.

“Off with their heads!” Photo by Danny Shuster

The goal of the game is to be the first player to play all their cards, or, to be the player who stacks the last available teacup without causing an avalanche. For a bit of added fun, the party table that acts as your base is purposefully wobbly, although you can remove the wobbly base for younger players or to help balance the difficulty. 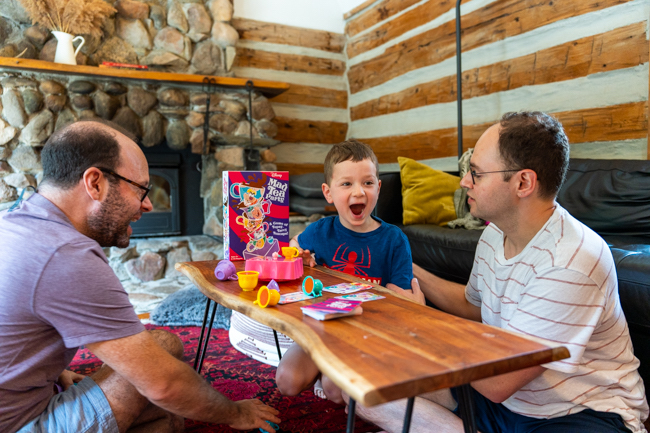 We sat down with a couple of our friends and their energetic 5 year old for some tea party fun. Now admittedly, 5 is at the bottom of the recommended age range for this game, but that didn’t slow us down one bit. 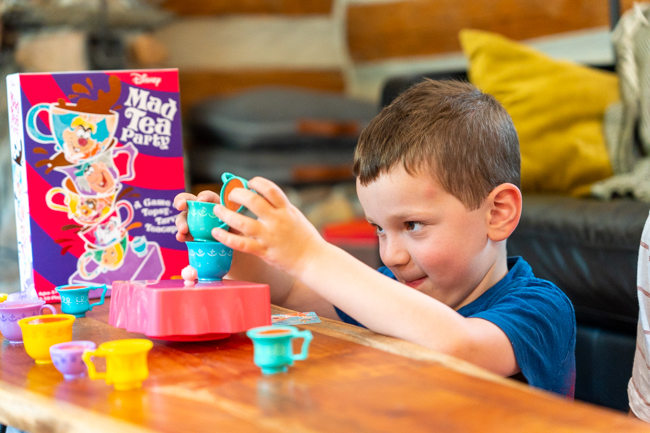 Getting into a rhythm with drawing cards and taking turns was a bit of a challenge but the fun of stacking cups and building tea towers was an instant success. Our test player immediately grasped the challenge and set to work stacking cups to his heart’s content. We all laughed and sipped imaginary tea and made jokes about being late for very important dates…it was a grand time and loads of fun for everyone involved but not exactly a rules-based playthrough of the game. 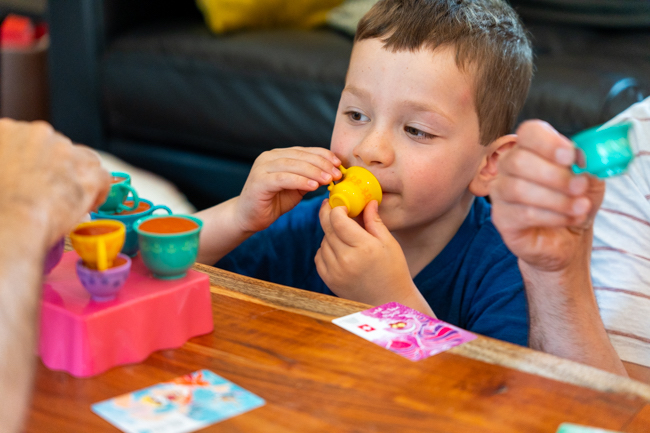 “Would you like a little more tea?” Photo by Danny Shuster

Nevertheless, I think this game will be a hit with your kids or anyone you know who is a devoted Alice in Wonderland fan. The box, artwork, and game pieces are lovingly detailed, the concept is easy to grasp, and whether you’re playing by the book or just trying to build the craziest tower of teacups possible, you’ll be squealing with delight watching the tower wibble and wobble. 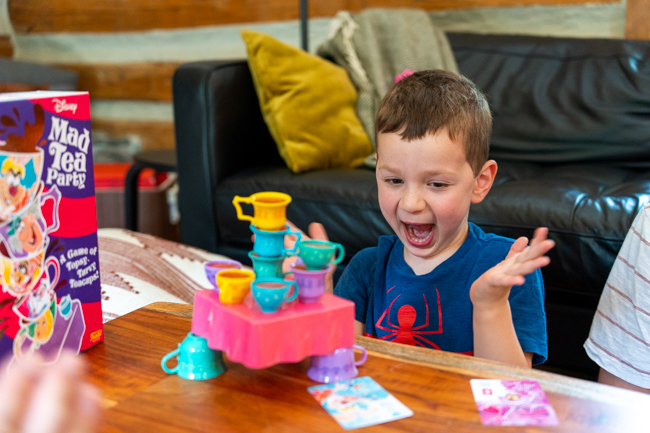 We love the Funko games for being quick and easy to set up and dive right into playtime. The growing collection of Disney-inspired games will have instant appeal to anyone with a fondness for those particular characters and we love seeing our Disney favorites brought to life in fun, new ways. You can pick up a copy of the game right here. 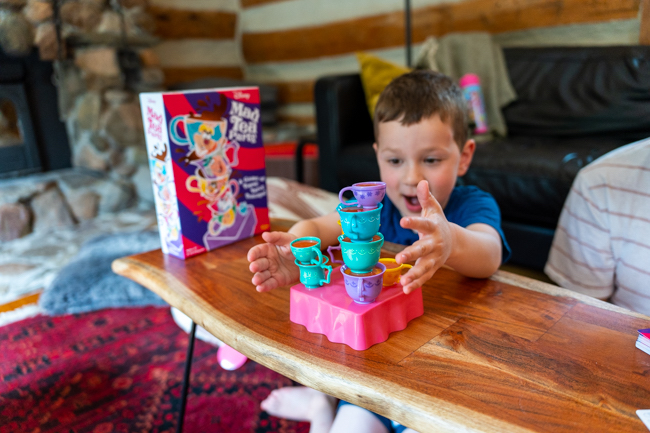