Revealed: The New Disney Treasure Ship: Inside and Details 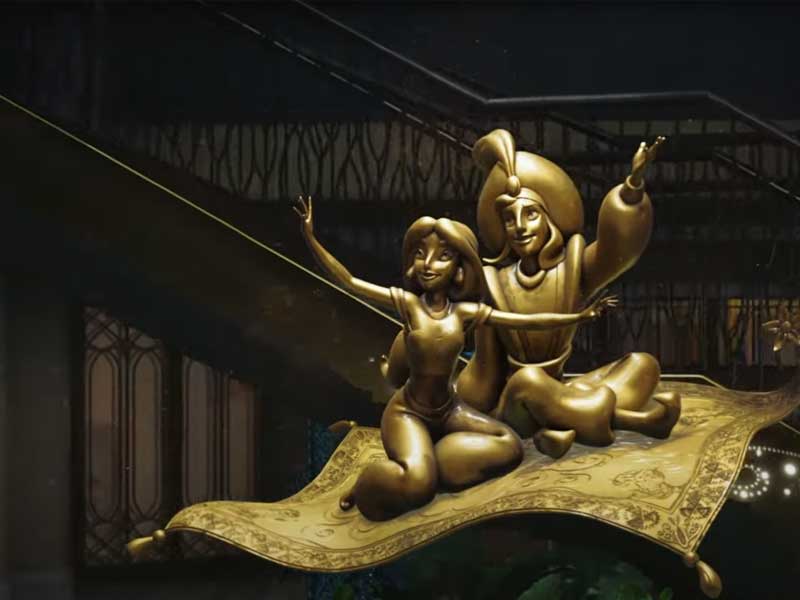 The new Disney Treasure ship was announced at D23. Here’s everything we know so far…

Ahoy, adventurers! Ye who yearns for unbound escapades and thrilling quests will soon be tempted by the siren song of the Disney Treasure. Pack your bags and make sure to grab your talismans, treasure maps, magic carpets, and spellbooks—it’s gonna be a wild ride!

This past weekend marked the seventh biennial D23 Expo, the ultimate fan convention that welcomes Disney buffs from all corners of the world to gather as the creative and executive minds behind the Walt Disney Company unveiled a cornucopia of projects in development. At the 2017 D23 expo, Disney announced that their cruise line would be expanding with three all-new cruise ships.

The first of these ships was dubbed the “Disney Wish”, which set sail on its maiden voyage in July 2022. The Wish, along with the two following ships that will set sail in coming years, is part of what Disney Cruise Line is calling their “Triton class” of ships, which will boast modern amenities and a larger capacity for guests. 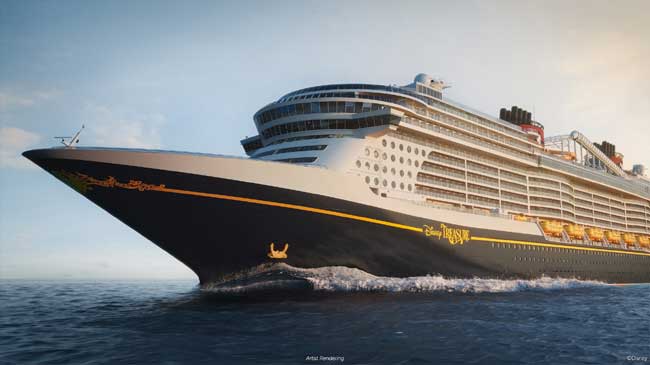 Once the Wish was out to sea, fans were hungry for details about the second ship to be added to the Triton class DCL roster. On Sunday, Disney Parks, Experiences, and Products Chairman Josh D’Amaro finally revealed details about the newest addition—appropriately named the “Disney Treasure”! 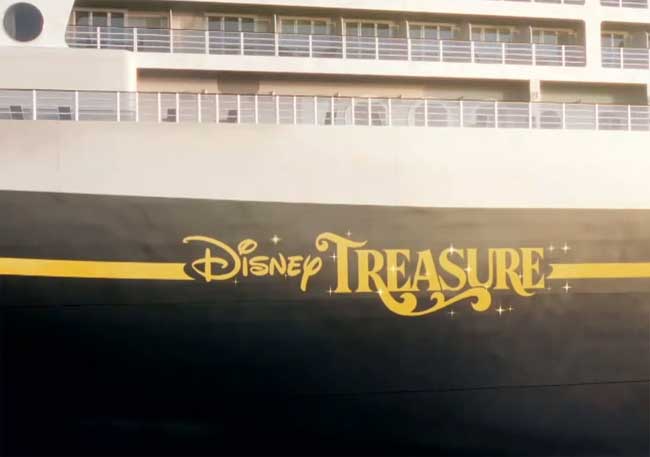 Just like the Wish, the Treasure will have the capacity to host around 4,000 guests within 1,254 staterooms. These lucky voyagers will be free to explore fifteen sprawling decks fitted with the luxurious Disney Cruise Line amenities that travelers have enjoyed since the Disney Magic first set sail over 20 years ago.

So what makes the Treasure such a gem? Well for one, the ship will take voyagers on a cruise like never before.

Whereas the previous DCL ships have focused on whimsical & enchanting themes (magic, wonder, dreams, fantasy, and wishes) this cruise puts travelers at the helm of their very own adventure. While hijinx on the high seas is a DCL guarantee, the Disney Treasure homes in on the alluring call of a wild quest.

Have you ever gazed out at the open ocean and wondered what awaits you on distant shores? Maybe you’ve stood at the foot of a mountain, staring up at the peak—ready for the unpredictable journey that exists on the way to the top. Or perhaps you’ve heard the unmistakable call of a mysterious quest that only you can fulfill… 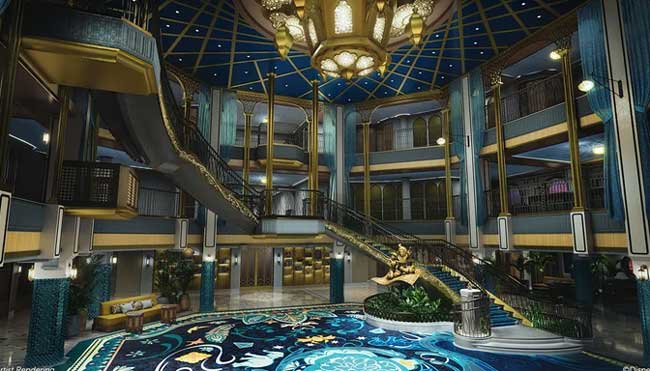 The Disney Treasure is a love letter to adventure’s call—the same calling that beloved characters like Rapunzel, Mulan, Hercules, Ariel, and Simba have answered in the tales that Disney fans hold close to their hearts. “At the heart of every adventure, there’s a treasure, and we can’t wait for you to create memories aboard this spectacular ship,” D’Amaro said of the inspiration behind the Disney Treasure at D23.

In the teaser video released at D23, the Treasure sails past as the courageous characters Miguel Rivera, Moana, and… the Hitch-Hiking Ghosts (?) wave from portholes.

All Disney Cruise Line ships have a signature atrium that embodies the spirit of the cruise and their Triton class is no exception to this grandeur. The atrium of the Treasure is noticeably richer in color and opulence than its predecessors. Deep sapphire blues, emerald greens, and shiny golds are reminiscent of priceless jewels that can be found in the Cave of Wonders or buried treasure chests.

The centerpiece of all DCL atriums is, of course, the iconic light sculpture. Previous classes of Disney Cruise Line ships have included stunning chandeliers that seem to drip from the ceiling, doused in bursts of color that captivate guests. The Triton class ships seem to have taken a more thematically detailed approach. 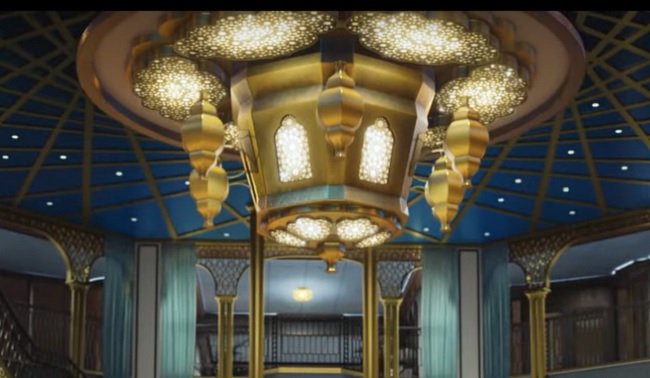 The Disney Wish features a stunning cluster of shining stars as its chandelier, with one star hanging below them all—reminiscent of the star that so many Disney characters have wished upon.

Concept art of the Disney Treasure shows a lantern-like light sculpture glowing in the center of the extravagant room, an example of the Asian and African artistic influences that D’Amaro cited as partial inspiration for the ship.

Aladdin and Jasmine in the Treasure Atrium 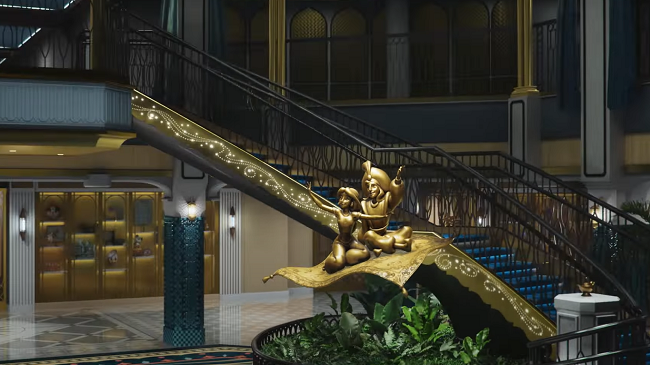 The golden atrium statue on the Disney Treasure invites guests to explore a whole new world! Few Disney characters represent the spirit of adventure as well as Aladdin and Jasmine—which makes them (along with the Magic Carpet) the perfect greeting committee for those boarding the ship.

As guests enter the Disney Treasure ship, they will be reminded of Aladdin’s odyssey as they stand before a beautiful gilded statue of Agrabah’s royalty riding on the back of their trusty steed!

When Will the Disney Treasure Set Sail?

With all these details released, fans are feeling that alluring call more than ever. However, the Disney Treasure is still a work in progress.

We’re just as excited as you are for the voyage to begin, but it will be a little while longer before adventurers will find themselves aboard. The Disney Treasure is scheduled to set sail sometime in 2024. We’ll have our eyes glued on the DCL Treasure page for booking information!

Soon after, the third unnamed DCL Triton class ship is set to debut. Disney has maintained over D23 weekend that all three Triton class ships will be on the water by 2025. Until then, we’ve got some mountains to climb and mysterious quests to complete!

To get a jump start on Disney Treasure reservations, you can contact a Disney Travel Agent at Destinations to Travel today to let them know that you plan to book the Treasure as soon as reservations open!