Pixar’s Turning Red Review: “You’ve Got a Friend in Mei” 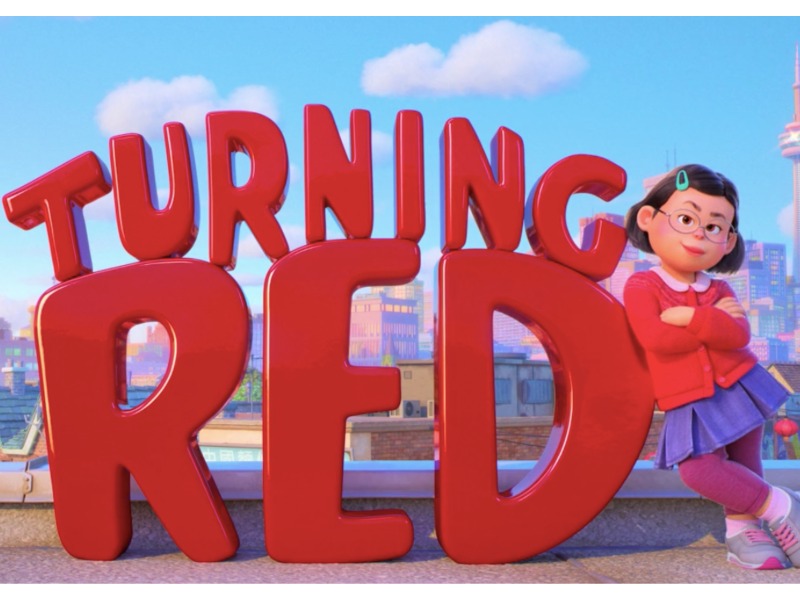 Exclusively streaming on Disney+, Turning Red is Pixar’s latest hit. But does this coming-of-age tale strike a chord with viewers (and we’re not just talking about those sweet 4*Town chords)?  Scroll on for our full Turning Red review.

I had been anxiously awaiting the release of Pixar’s Turning Red for some time. This story is especially exciting for me because my hometown of Toronto serves as the backdrop for the feature film.

As much as the film is a love letter to Toronto (created by Oscar winner and Torontonian Domee Shi), Turning Red, like any good Canadian, makes everyone feel welcomed and seen.

In this review of Turning Red, I’ll focus on what Turning Red does really well: masterfully create characters, celebrate diversity, tap into that early 2000s nostalgia, and effectively utilize symbolism to talk about a really important topic for growing kids.

The Well-Written Characters of Turning Red

I want to touch on two supporting characters: Jin Lee, Meilin’s father, and Tyler, middle school jock and sometimes bully. Defying gender stereotypes wasn’t by any means a main theme of Turning Red, but I recognized it in these two and was impressed with how they were written. 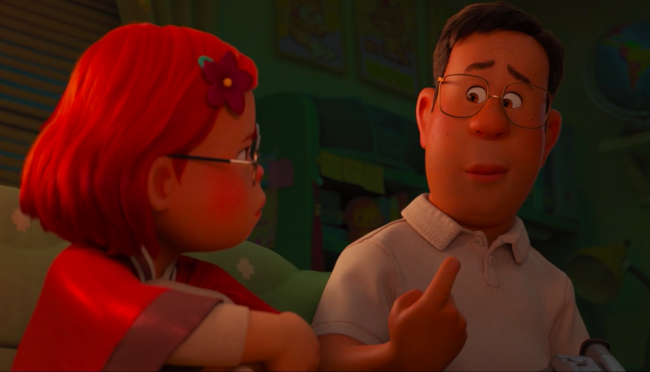 I strongly believe that Jin Lee has earned his place in the hall of the greatest Disney dudes ever. What a gem. While his wife and daughter hustle at the family temple, Jin dons a flowery apron and stays home to cook dinner for the family.

When Meilin feels like she’s dishonored her family (due to her mother’s, grandmother’s, and aunts’ expectations), Jin is the one who encourages her. Jin tells her that people have all different sides to them and that some sides are messy; he tells her that this new side of her made him laugh. He helps Mei embrace all facets of herself.

Not to mention, he’s got killer dance cred! Did you watch the movie until the very end? If not, go back and check out the post-credits.

We also have Tyler, a seemingly typical jock whose hobbies include basketball and picking on Mei and her pals. But there’s more to him than meets the eye.

Toward the end of the film, we find out that in addition to shooting hoops, Tyler loves boy band 4*Town as much as the girls do (and subsequently joins their friend group after the concert; if you look closely in the final scene of the movie, you’ll see that the girls even made him a matching friendship bracelet that he’s proudly sporting).

On the whole, it’s a small moment in the movie, but I’m loving the storylines of kids loving all different kinds of outlets, whether it fits into a stereotypical gender identity or not. Well done here, Pixar (and specifically to Domee Shi and Julia Cho, who co-wrote the screenplay for Turning Red).

In a time like middle school, when your ultimate desire is to fit in, turning into a massive, furry red panda at the slightest heightened emotion isn’t exactly convenient.

Mei wails that she’s a “gross, red monster,” and mama Ming Lee assures that there’s a cure (Mei’s first telltale indication that her panda is something that needs curing, that should be removed from her identity). Our half-pint protagonist affirmatively wants the cure ASAP. 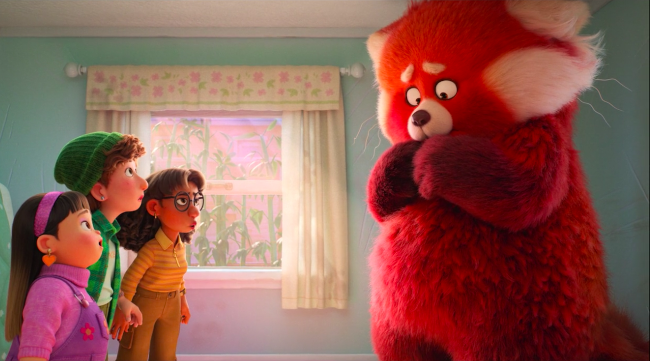 Surprise: Mei’s friends are accepting and loving of the panda transformation! Screenshot: Disney•Pixar

That is, until she realizes her besties Miriam, Priya, and Abby actually love Mei’s alternate fur-sona. But her friends do more than just merely accept her. They celebrate this new discovery, which in turn, shows Mei that she can embrace her new self, instead of seeing her panda as a curse.

As a viewer, I assumed all the other kids at school would inevitably learn the truth about Mei and deem her a monster. How wrong I was.

In Turning Red, the writers decided that all the kids in school would also love her panda. (“You are the cutest thing ever!” swoons a popular tween).

In no time, the students all fall in love with Mei—and all because she’s different. It’s a direction I didn’t see coming, and I loved that the writers chose to take it this way.

There were other small things I noticed, such as a couple of students with diabetes (recurring character Stacy has an insulin pump infusion on her arm, and another student wears a continuous glucose monitor).

They’re “blink-and-you’ll-miss-it” moments, but I’ve seen members of the diabetes community praising Pixar for this addition, saying that this kind of normalization of kids just being themselves at school, while also living with diabetes, has been huge for them and their children.

While the story of Turning Red is focused on a Chinese-Canadian girl and her family, we also see many diverse groups of people in this movie. We love to see the inclusivity (especially in Toronto, which is known to be one of the most multicultural cities in the world).

As a Torontonian, I appreciated the diversity represented here. I felt like it genuinely represented my hometown in a beautiful way.

It’s still shocking to me to dub the early 2000s as nostalgic. Turning Red is set in the year 2002, and I think to myself, “That wasn’t really that long ago … was it?”

But in fact, this movie takes place nearly 20 years before its release date. Creator Domee Shi set the movie in 2002 because the film was inspired by her own adolescence at that time. There’s a smorgasbord of references that millennials will absolutely love. 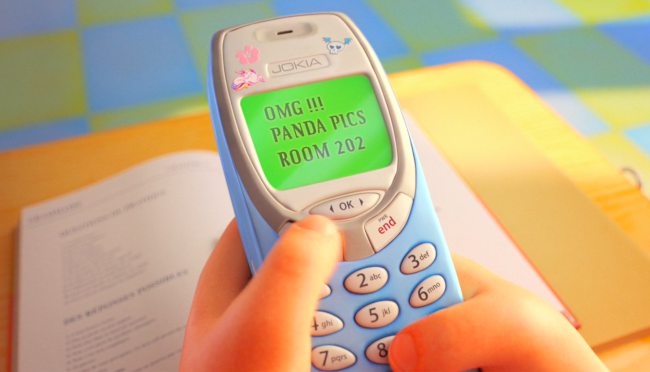 Look at that not-Nokia! Screenshot: Disney•Pixar

The team behind Turning Red did an excellent job creating visceral memories of this time period, an era dripping with superfluous boy bands, flip phones, and a vital symbol of early 2000s ride-or-die friendships—taking care of your BFF’s Tamagotchi even if you’ve had a fight.

I especially loved Mei’s full-on, sparkler-laden presentation to her parents in an attempt to convince them why she must go to the 4*Town concert with her friends at the SkyDome (another sign of nostalgia for us Canadians—in 2004, the SkyDome was bought and renamed the Rogers Centre, but no self-respecting Toronto resident calls it that. It will always be the SkyDome). 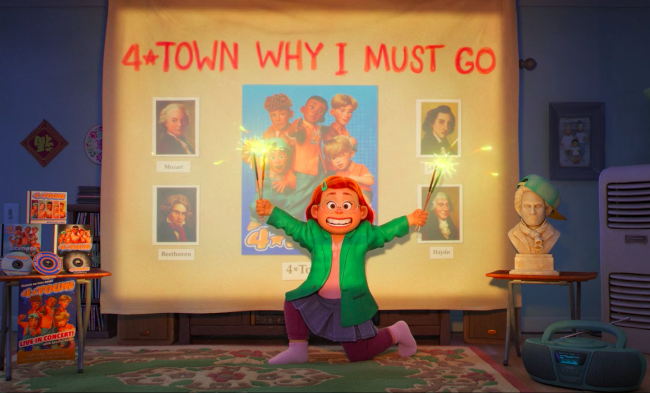 Mei’s presentation is all of us at 13 begging for something from our parents. Screenshot: Disney•Pixar

That part of the film resonated in such a real way because I was also in my adolescence in 2002 Toronto, and I can vividly remember making similarly elaborate presentations, begging my folks to let me attend concerts with my school-aged friends at the SkyDome. (The answer was always “no.” Mei Mei, I feel you, girl.)

I’ve admittedly been bopping to the poppy 4*Town tune, “Nobody Like U,” all weekend long. The song perfectly captures the essence of the boy band era and brings me right back to my preteen years of obsessing with my friends over groups like Backstreet Boys, N*Sync, and O-Town.

The Creative Symbolism of “The Red Peony Blooming”

Plain and simple, puberty is a taboo topic, especially in media, even though a large percentage of the world’s population has experienced it.

The Turning Red team did a formidable job of taking this allegory and making it wonderfully authentic and unique. 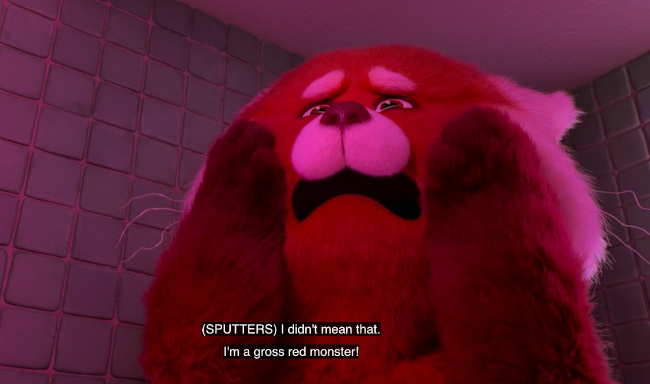 Pixar expertly addresses puberty, rather than ignore it, in Turning Red. Screenshot: Disney•Pixar

The film doesn’t only address topics such as periods; it poignantly tackles the complexities of parents’ and children’s changing relationships—the point when parents go from the coolest people in a child’s life to the point when a child’s worst fear is being mortified by their parents.

It’s a time of enormous mood swings, discovering brand new emotions and bodily changes, which we see manifested in Meilin’s initial anxiety and humiliation over her newfound form as a red panda.

The energetic 13-year-old goes from a disciplined, people-pleasing daughter to a teenager grappling with how to honor herself and the changes she’s experiencing, while still respecting her parents (specifically, her mother, Ming, who’s having just as much trouble accepting Mei’s growing pains).

As Mei begins to love and embrace herself for who she is (with encouragement from her friends), she speaks her truth and boldly confronts Ming, proclaiming, “This is me! … I like boys! I like loud music!”

In that moment, I was cheering so loudly for Mei Mei—and for young teens everywhere who long to be seen and accepted for who they are and what they’re feeling as they start to come of age.

That kind of unfettered confidence is rare in a time of puberty, and I love that Turning Red showed us that it’s OK to have that confidence and to create open and honest dialogue with each other about going through changes.

I could go on about how much I loved this film: the stacked cast, the themes of learning how to recognize and heal generational wounds, and I could certainly wax poetic about all the specifically Canadian easter eggs that made my northern heart soar.

But truly, I do think Turning Red is one of Pixar’s best films in years. I loved its uniqueness and its diversity and cannot wait to see what the all-female creative team behind this story will do next. 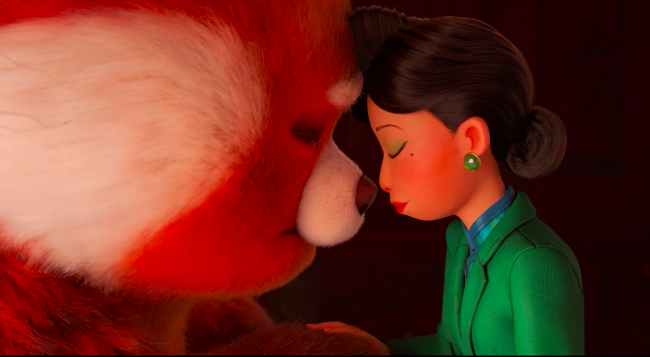 The mother-daughter relationship that this film explores is beautiful. Screenshot: Disney•Pixar

I personally would love to see a Disney+ series covering the adventures of Mei and her squad (which now includes Tyler). And I very much hope we’ll get a Panda Mei meet and greet at the Canada Pavilion in EPCOT!

Until then, I’m going to have to get my hands on a fluffy Panda Mei plush. She just looks so snuggly!

For more Mei Mei, be sure to get our May (see what I did there?) issue by subscribing to WDW Magazine. Our May issue will be covering all things Pixar, and I’m sure you’ll catch a glimpse of our new favorite panda pal.

See the Pixar Stars at the Canadian Premiere of Turning Red

Check Out These Turning Red Attractions at Disney Parks This Spring